Having reunited all the pets who travelled with us from the UK with their owners, Animalcouriers turned around and set off on the UK-bound leg of the trip.

The first passenger to get on board was Rafa, who’s been living near Faro in Portugal with his owner Rosemary. Now it’s time for them both to go back to the UK. Rafa is going on ahead, and will stay with friends in Cornwall until Rosemary arrives.

In Spain we met up with Meiow Meiow and Ziollo just outside the cement works at Manilva. Owner Sue has gone on ahead to the UK and is excitedly waiting for them in Hove. They’ve been in the care of Kirstie and Mark, who told us they will very much miss their walks with Ziollo.

In Nueva Andalucia we called in on Margot to collect her suave black-and-white puss Q — so named because her son is a big fan of that character from James Bond. Q and Margot are relocating to Cheltenham in Surrey — and will perhaps ultimately move to the Netherlands, which is where Margot comes from.

Rosemary with her handsome hound Rafa

Rafa all ready for the off

Anyone who lives near to, or travels in and out of, Faro airport will be familiar with these fabulous figures peering up at the sky from the roundabout. Called ‘The Plane Watchers’, these roughly hewn stone sculptures are by Teresa Paulino. They make us smile every time we see them.

Fortification at the Spanish town of Ayamonte, built to cover the river separating Spain and Portugal

Giant asparagus anyone? This succulent throws up a 10m high flower stalk!

Rafa spotted some sheep on his morning walk and seemed keen to do some shepherding… but realised he wasn’t really sure how to go about it!

Kirstie and Mark, who’ve been taking care of Sue’s pets since she left for the UK

Ziollo is a real smiler

Margot with Q outside their apartment block

Along the way we’ve been enjoying all sorts of beautiful spring flowers, many of which are completely unfamiliar to us. We’d really love to know what this one is — any ideas?

Courier M had a field day, here are some of his finds… (click on a photo to enter the slideshow) 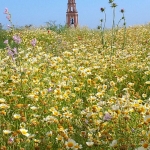 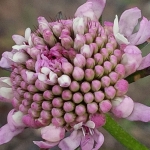 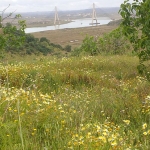 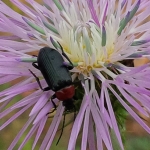 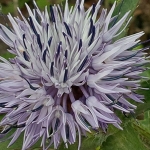 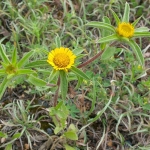 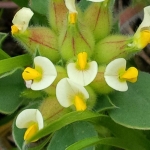 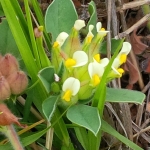 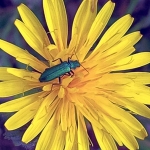 This marvellous painting appears on wall at the entrance to a tunnel north of Malaga. There are two more at the other end.