A catch-up on recent pet travels through Europe and beyond

As we approach the end of the year, it’s time to catch you up on some recent pet travels through Europe and beyond. Our couriers have been busy on the road and, and we’ve had the pleasure of transporting many delightful cats and dogs.

Boru, a dog from Florida to Northern Ireland

Splendid Boru is a giant Newfoundland belonging to Julie and family. He had a complex journey to join her. First, he flew from Tampa, Florida via Atlanta to Amsterdam where Courier Ricardo collected him for his journey to our Surrey base. Courier Anthony picked him up and took him the rest of the way to Northern Ireland, where a very excited Julie was waiting for him. 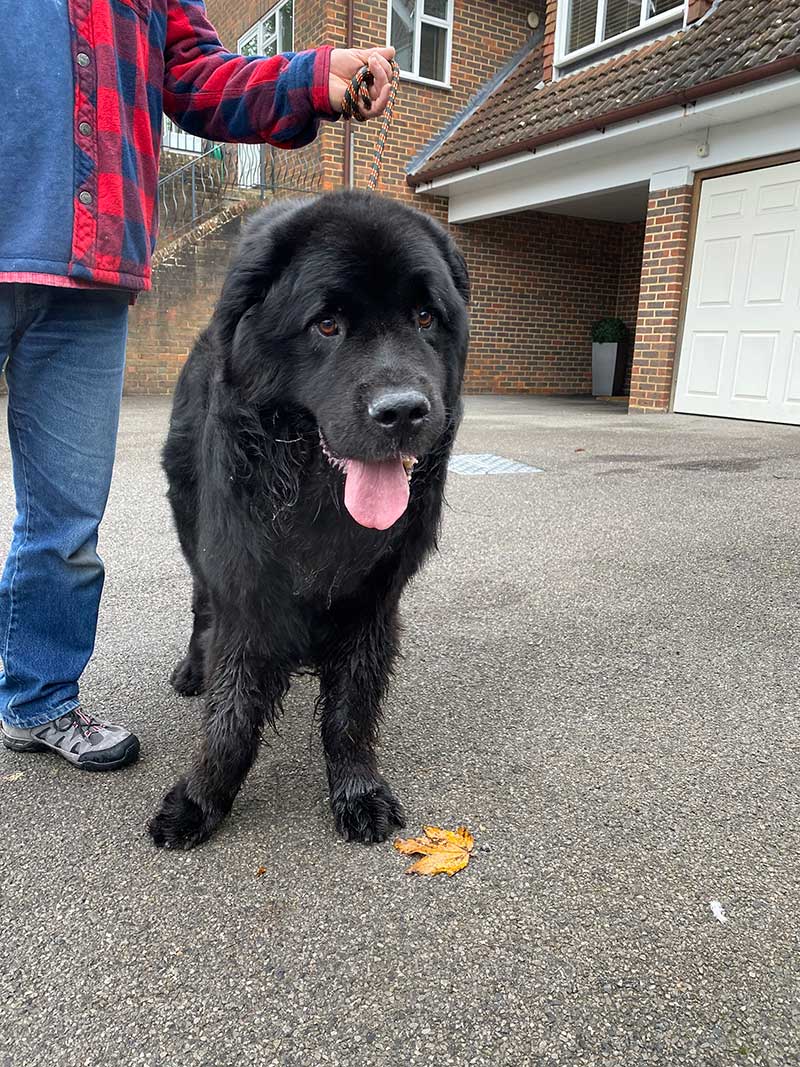 Gentle giant Boru takes everything in his stride 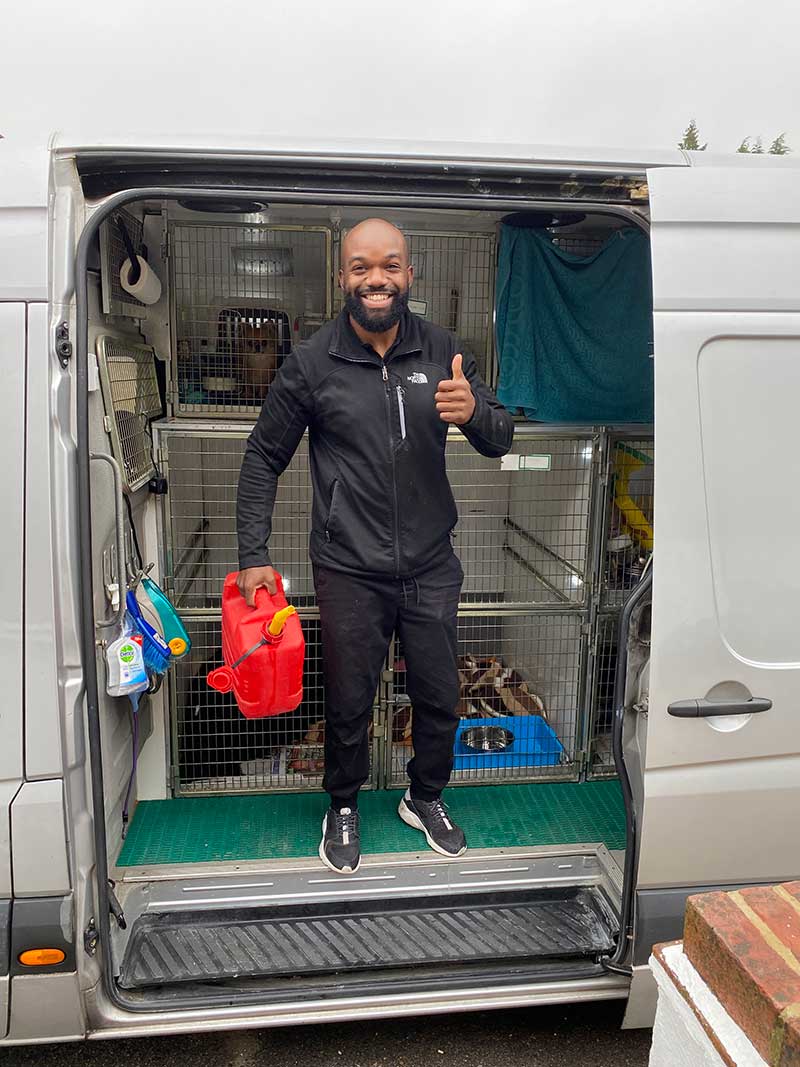 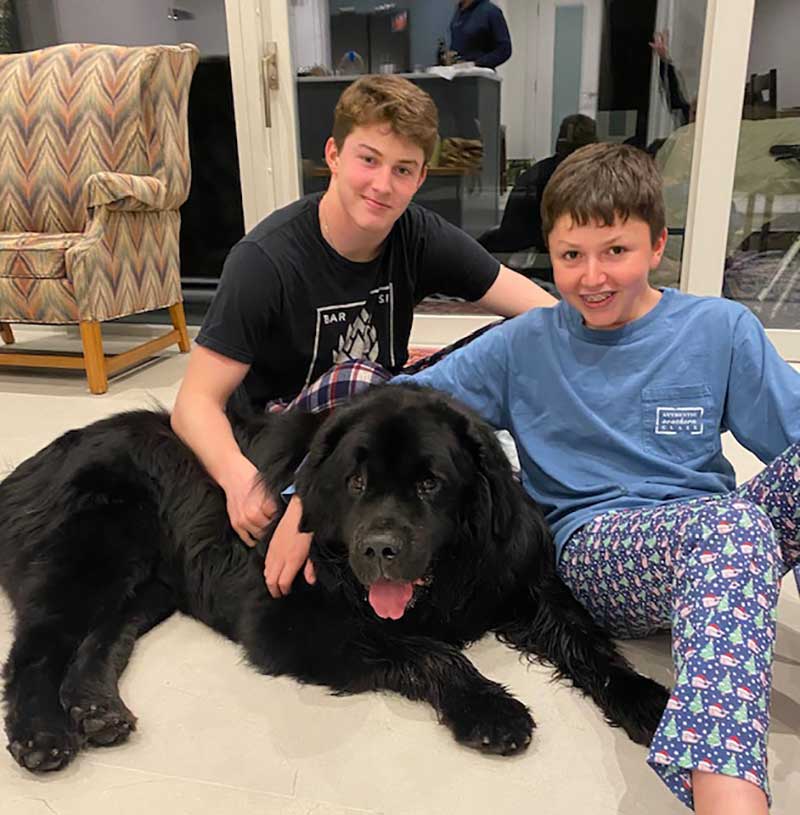 A wonderful welcome home for Boru. Julie said: ” He’s exhausted but happy to be home with his family! Thank you for getting him here safely!! “

Oscar and Oliver, 2 dogs from Dubai to Northern Ireland

At the other end of the scale in terms of size, Oscar and Oliver also joined our trip to Northern Ireland. These two cuties were adopted by Adam via Al Mayya Adoptions in Dubai. 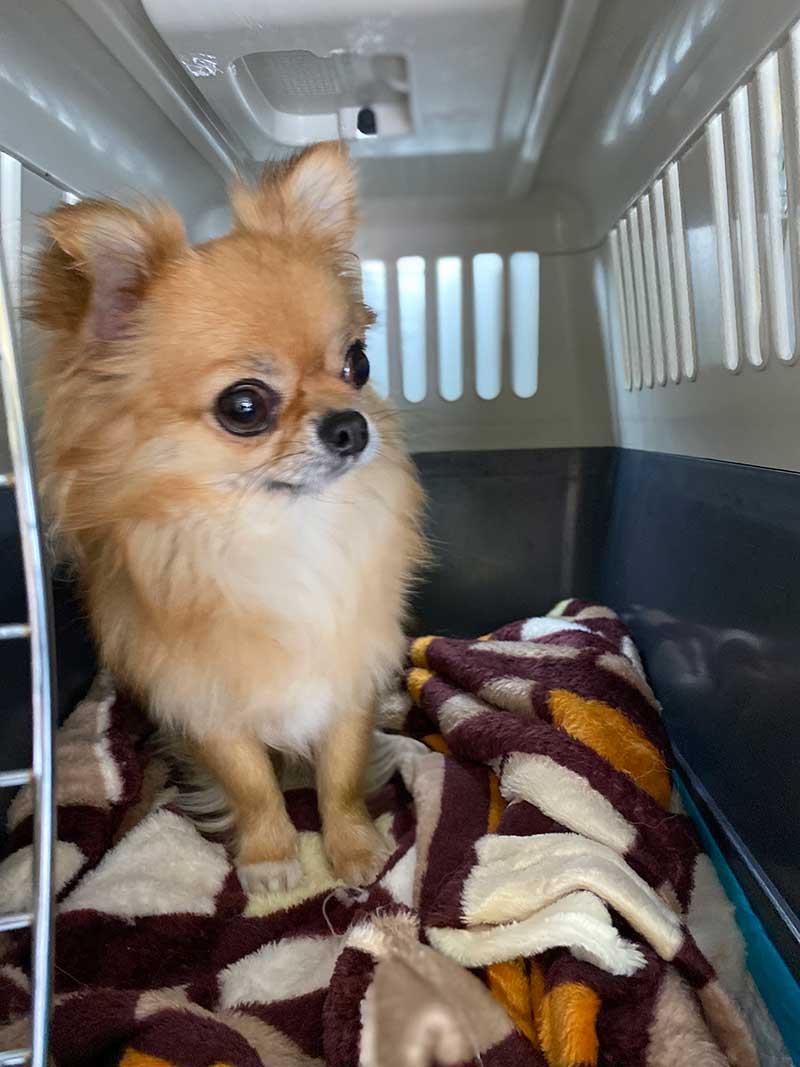 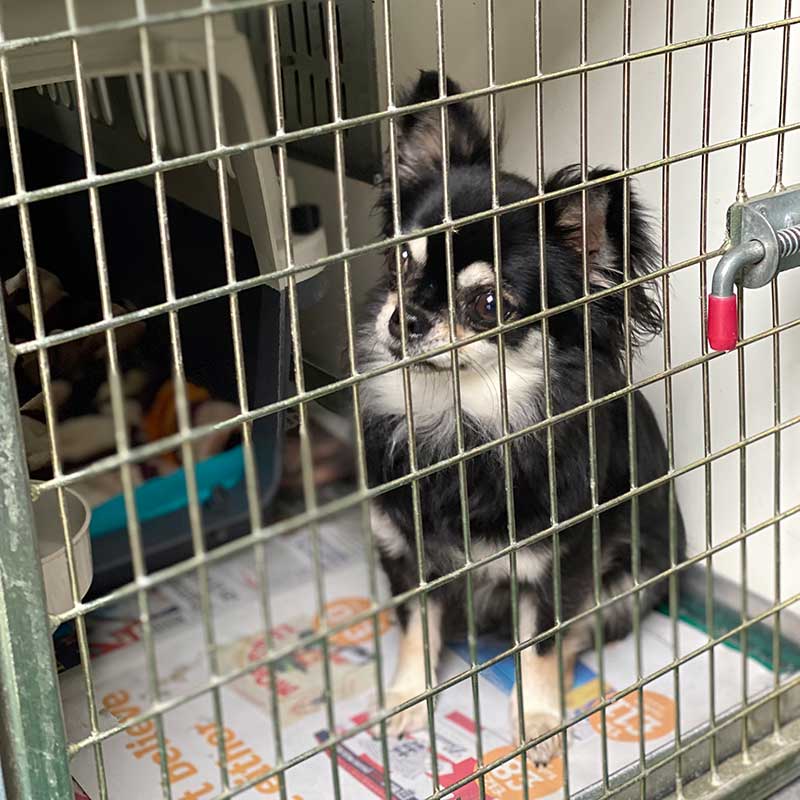 Ginger, a dog from Scotland to France

Gorgeous Lab Ginger belongs to Arindam and family, who relocated from Aberdeen to the French city of Pau. Ginger had to wait a few days for his rabies vaccination to come into date before he could travel, so he boarded locally. Courier Ricardo travelled to Scotland to pick him up for his journey to our Surrey base, from where courier Anthony drove him to Pau.

Ginger is quite a nervous dog and has a few health conditions, so we made sure he took all his medication and had plenty of water and attention.

Once Ginger and his family were reunited, Arindam wrote to say:

“Last night we were reunited with Ginger and the happiness was enormous. I would like to thank you all for all your help & roles in the process. From day 1, you have been very good in communication & handling things like paperwork, sending payment receipts on time etc. Both Ricardo & Anthony kept me informed throughout the journey. And Julia, you have been accessible all along, and provided the tracking from time to time, which was a big breather for the anxiety we had while Ginger was travelling. This was very important for families like us, who don’t do it very often. It felt so professional but with a personal touch. And even after such a long journey, Ginger was not exhausted. All in all, I had a very positive experience. I would look forward to using your service again in future, in particular when we move from France.” 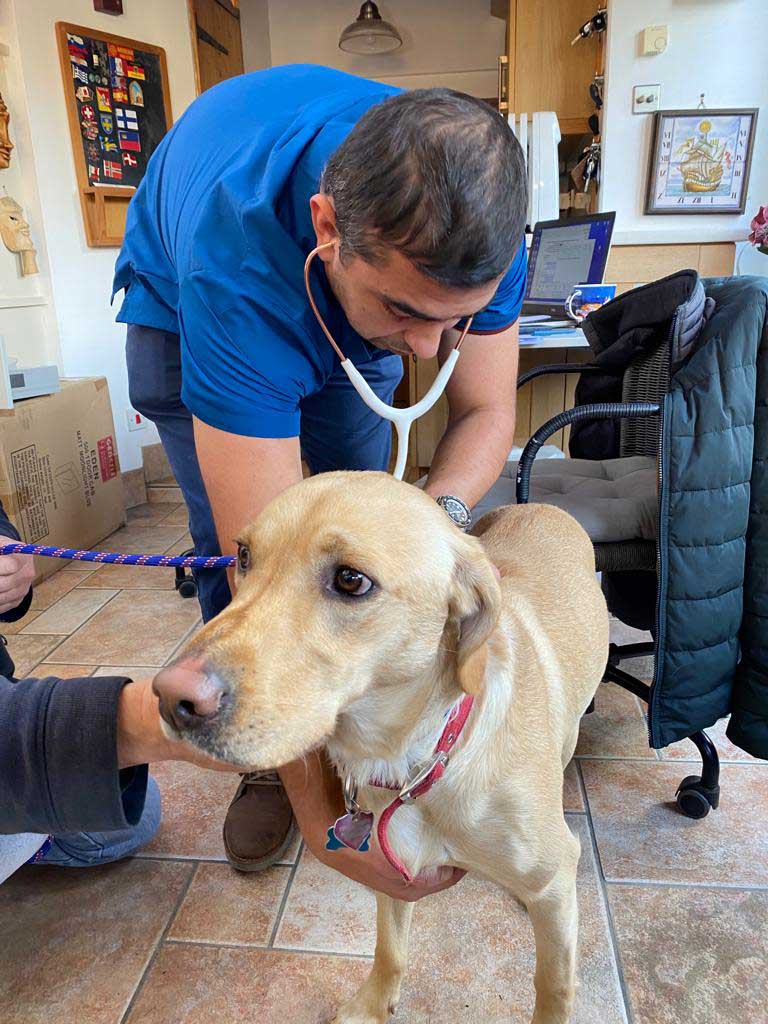 A quick vet check before Ginger set off for France 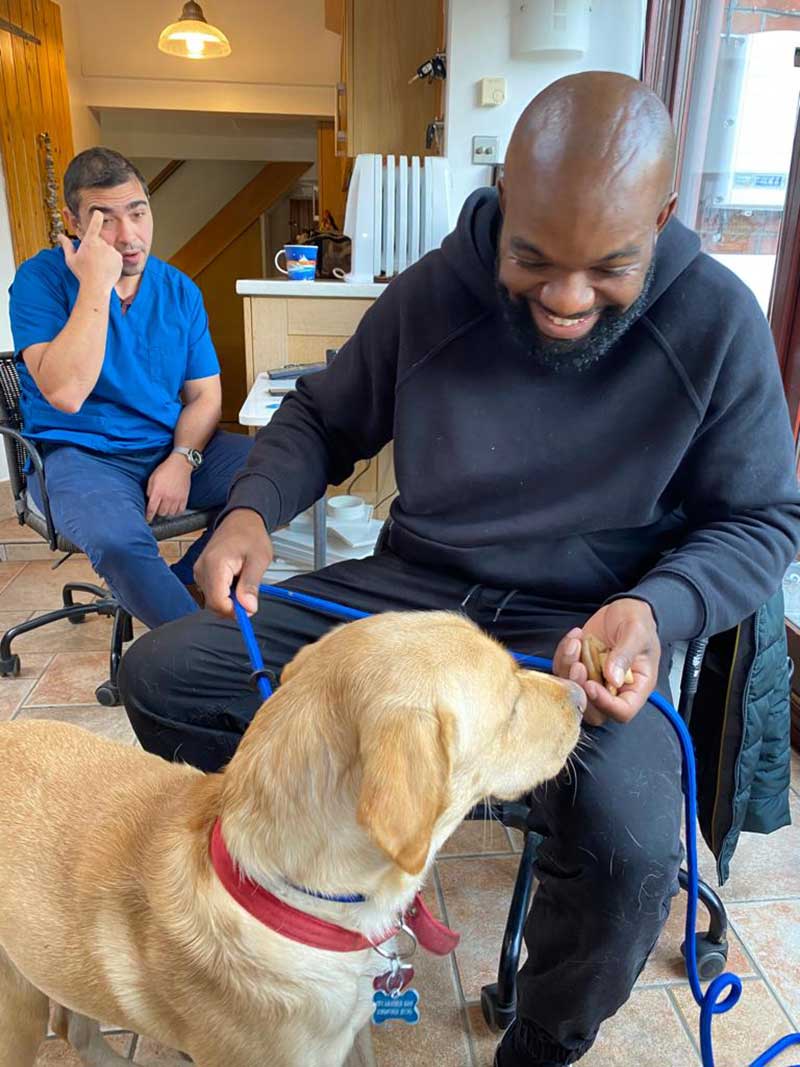 Courier Anthony getting to know Ginger

Tula, a cat from Berkshire to the Netherlands

Tula was due to move from Berkshire to Groningen at the same time as her siblings and family, but she ran away! Fortunately, she showed up three months later, so her family asked us to transport her. Courier Paul was thrilled to see how much joy and happiness her family felt on being reunited with her. 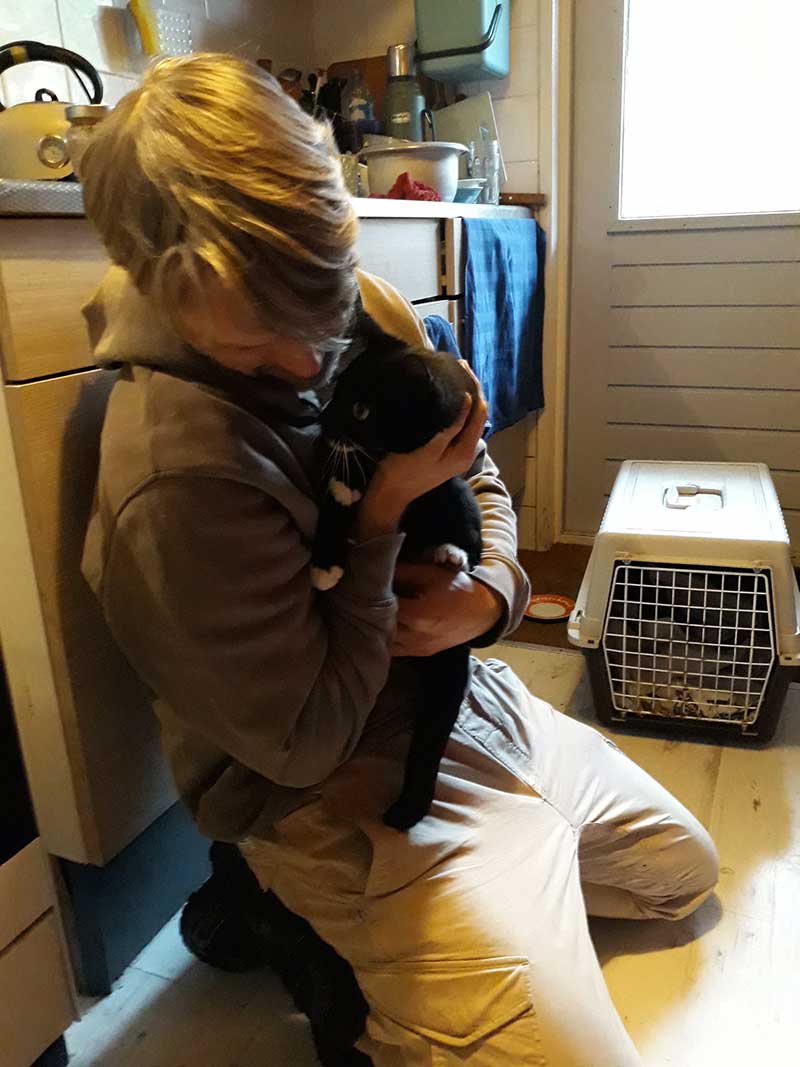 Tula the runaway, finally back with her family

Bertie, a dog from the UK to Sweden

Two-year old Pug Bertie also travelled with courier Paul, from Hertfordshire to northern Sweden, where his family were waiting for him. 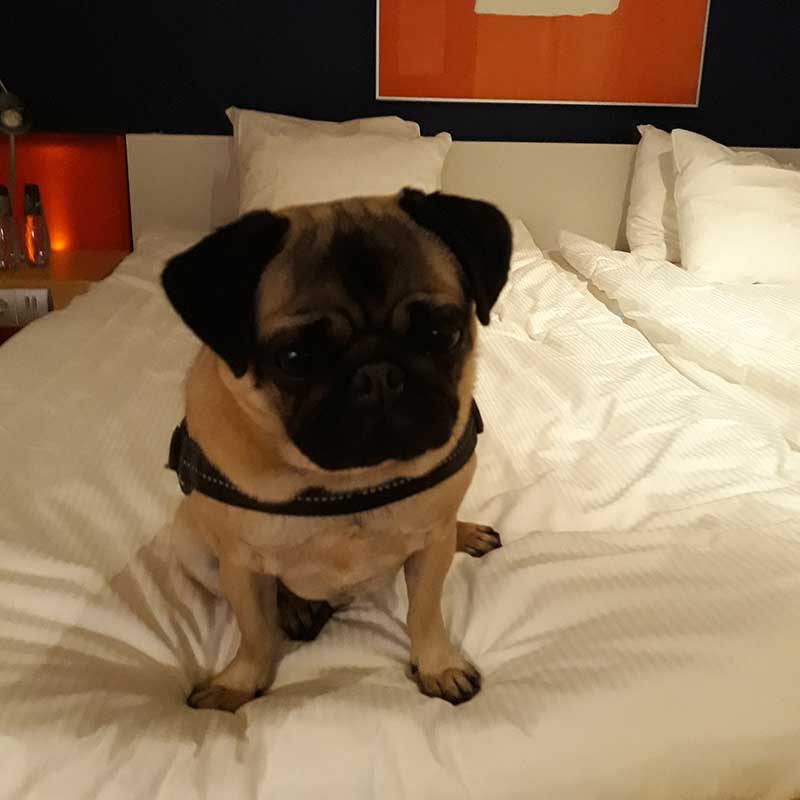 The weather was very cold on through Scandinavia, so courier Paul brought Bertie into his hotel room overnight

Vigo, a cat from the US to Ireland

Wonderful (mostly) white cat Vigo flew from Chicago to London Heathrow airport. On Vigo’s arrival, however, the vet spotted a problem with the rabies entry in Vigo’s paperwork. While that was being researched, we then heard that the wrong microchip number was also in the paperwork. To make sure the right cat had travelled, we asked owner Ryan to identify Vigo from a photo. Fortunately, Vigo’s markings are quite distinctive and Ryan confidently confirmed this was indeed his cat.

Two whole days later the vet in Chicago at last established there had been a mistake and clarified the rabies entry. So courier Trevor could finally take Vigo home to Ryan in Ireland. 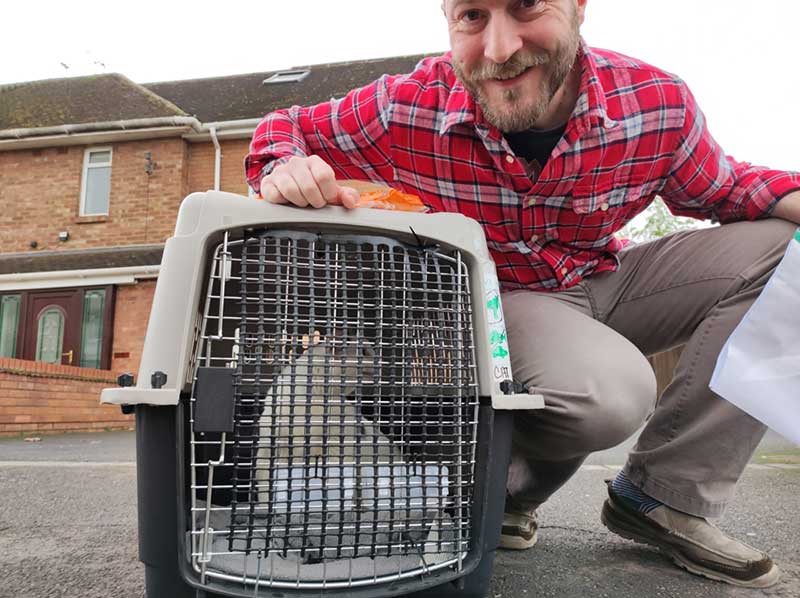 Ryan takes delivery of Vigo at last. Ryan is a five-star owner — he stayed calm and helpful throughout the whole process of verifying his cat. 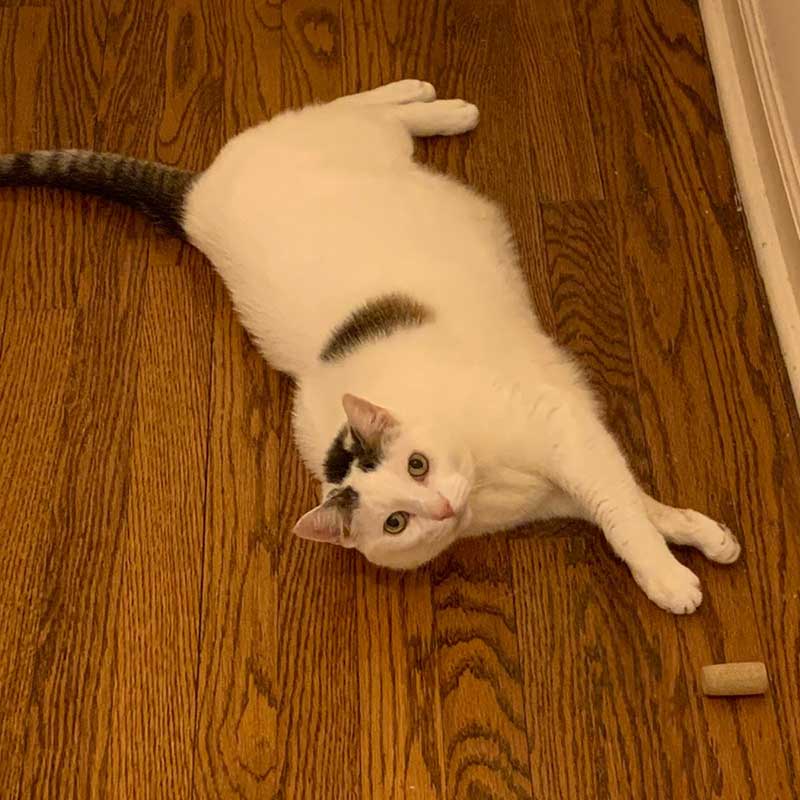 Vigo happily settled in at home

Vodka, Whity, Agage and Tequila, 4 dogs from Rome to Barcelona

Fabian and his wife have an enormous family of rescued cats and dogs. When they moved from Italy to Spain, they were able to transport their smaller pets themselves, either by road or as baggage on their flights.

However, these four big dogs — Vodka, Whity, Agage and Tequila — needed a different sort of journey, so Fabian turned to Animalcouriers for help. Courier Huw collected this delightful quartet in Rome and delivered them in Barcelona just over 24 hours later. 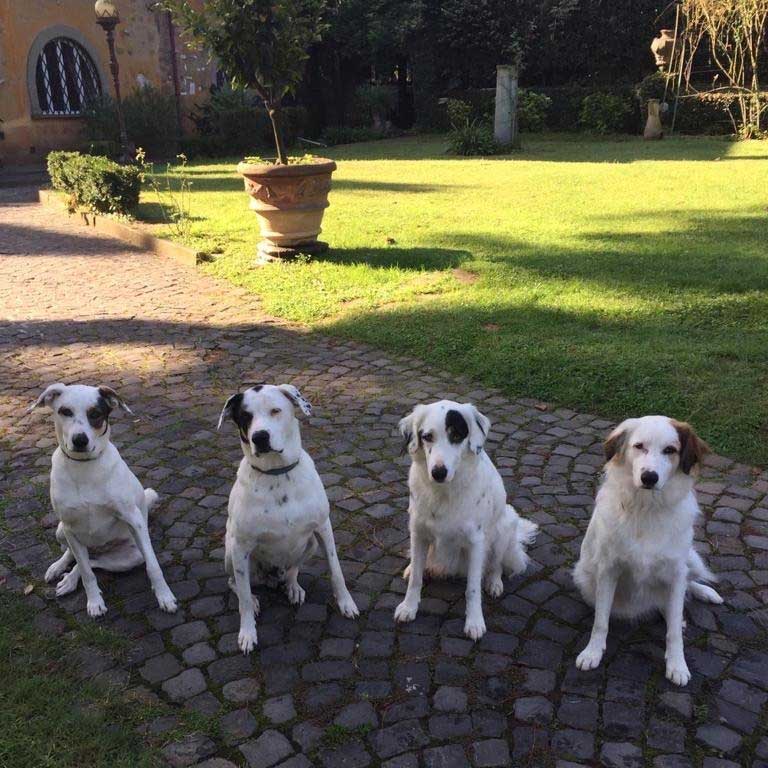 Such a well behaved gang of hounds! 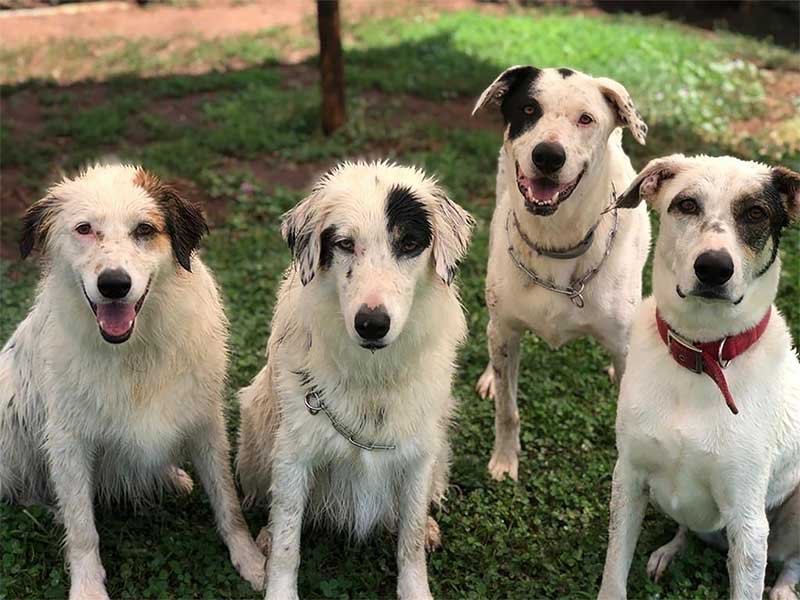 Every one a winner

Piper, a puppy from the UK to Bermuda

Courier Helen had the pleasure of collecting adorable 12-week-old Cocker Spaniel puppy Piper in Marlborough, due to fly to Bermuda. She homeboarded little Piper overnight, who enjoyed playing with all the dog toys, shoes and toes she could find. After a tasty dinner, she settled down in her comfy bed under the kitchen table, waking refreshed the next morning and ready for the drive to Heathrow Airport to catch her flight. 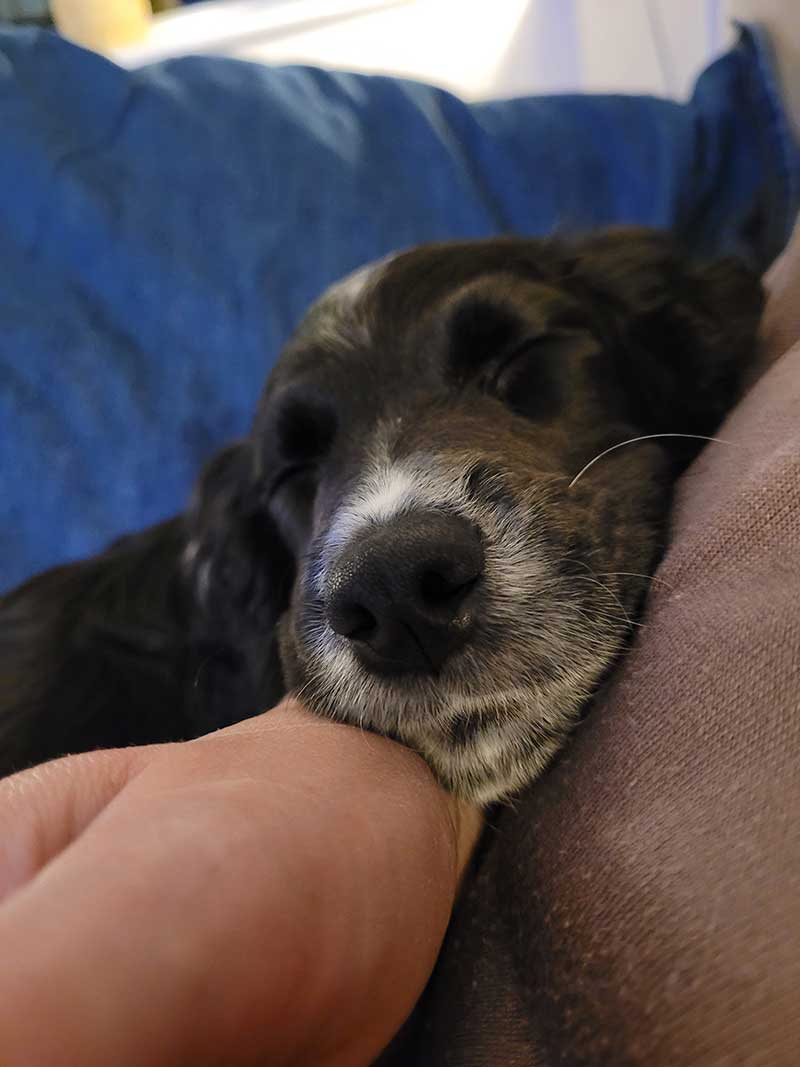 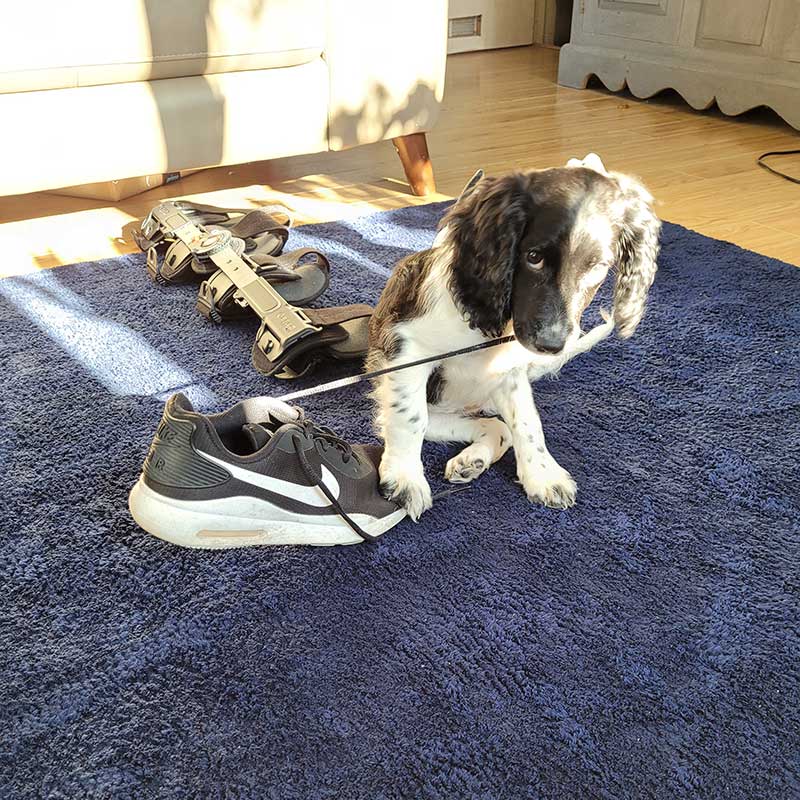 Piper up to no good 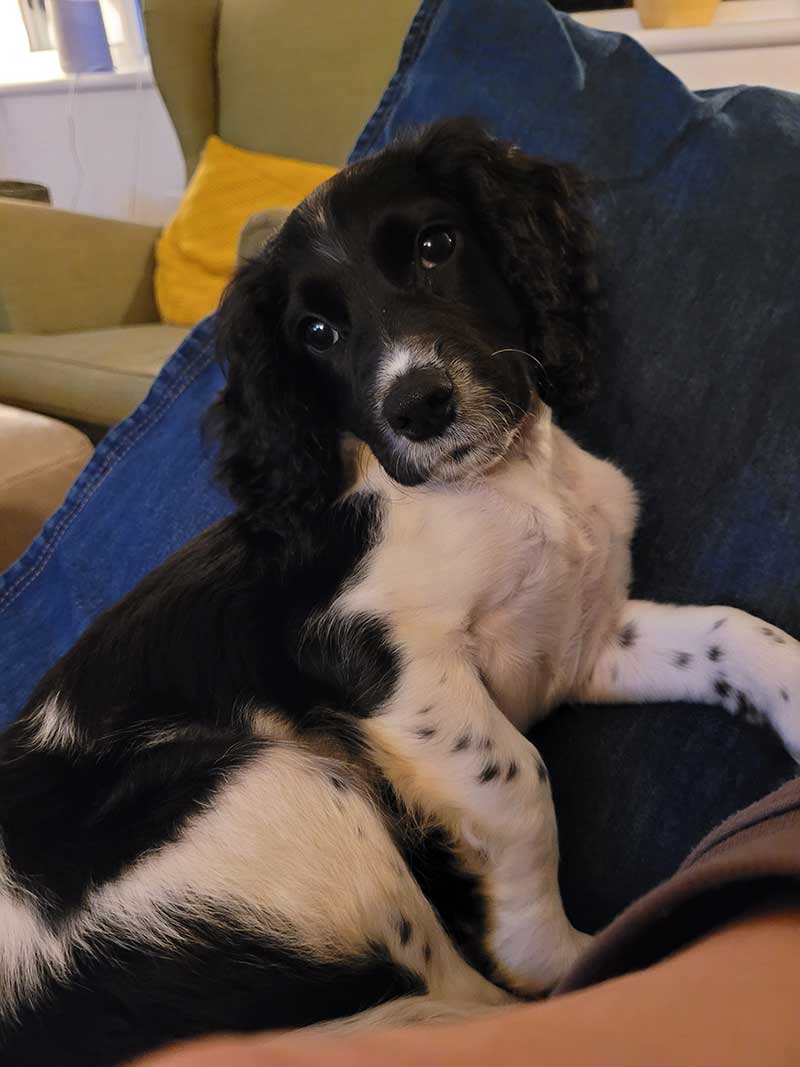 Does she know just how cute she is?