Reuniting more Ukrainian cats, dogs and a rat with their owners in the UK

We’ve had the pleasure of reuniting more Ukrainian cats, dogs and a rat with their owners in the UK. At the same time as Nimo the tortoise was travelling with us, our couriers met cats, dogs and a fancy rat called Lili, all heading to the UK to rejoin their families. Here are some of their stories, which remind us all how important our pets are to all of us, how hard it is to be apart from them, and the joy and relief that come with being back together.

It’s why we’re offering free road transport for Ukrainian family pets. If you can contribute in any way, please head over to our supporter’s GoFundMe page.

First, though, let’s introduce you to Joker, a cat who travelled out with us from Surrey to Germany

Joker, a cat from England to Germany

Handsome Joker, who belongs to Allana and family, joined us in London for his journey to Munich. Unfortunately the family’s plane was cancelled, so Joker got there before them! Fortunately, friends were on hand to welcome and take care of Joker until his family caught up. 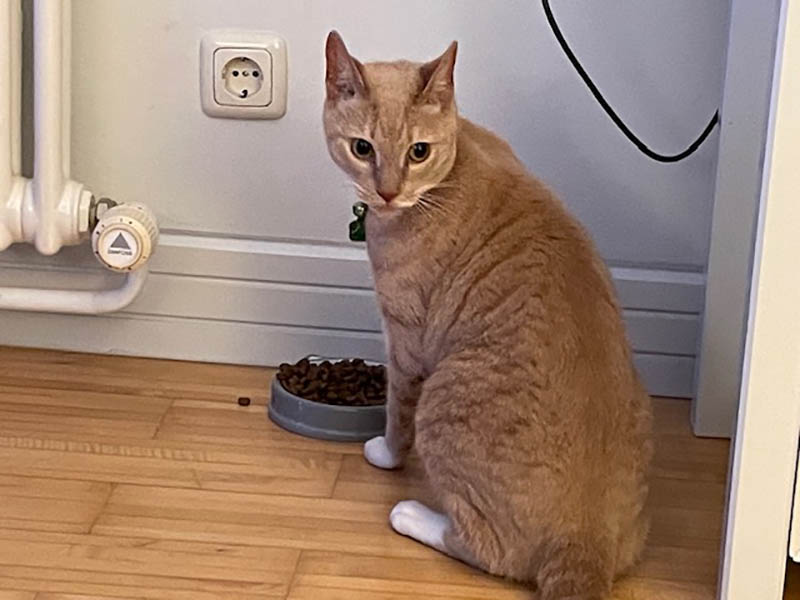 Joker looking settled in Germany. His ginger fur is well set off by his four white mittens!

Lili, a fancy rat from Czechia to Hereford

Darling fancy rat Lili belongs to Natalia’s 10-year-old daughter. The family had already travelled to the UK, leaving Lili in the temporary care of a friend in Prague. Courier Gwen, who collected Lili in Prague, was happy to share her hotel room with Lili, and reports that she loves bananas!

“A massive thank you to all of you for transporting Lili from Prague to England. We are so grateful, and we couldn’t have done it without you. It was a long journey, and so it was very reassuring to have the updates and pictures. Her 10-year-old Ukrainian owner was absolutely thrilled to be reunited with her, and has hardly stopped kissing her. Lili means so much to her, and it would have been awful if they could not stay together. We are all delighted!” 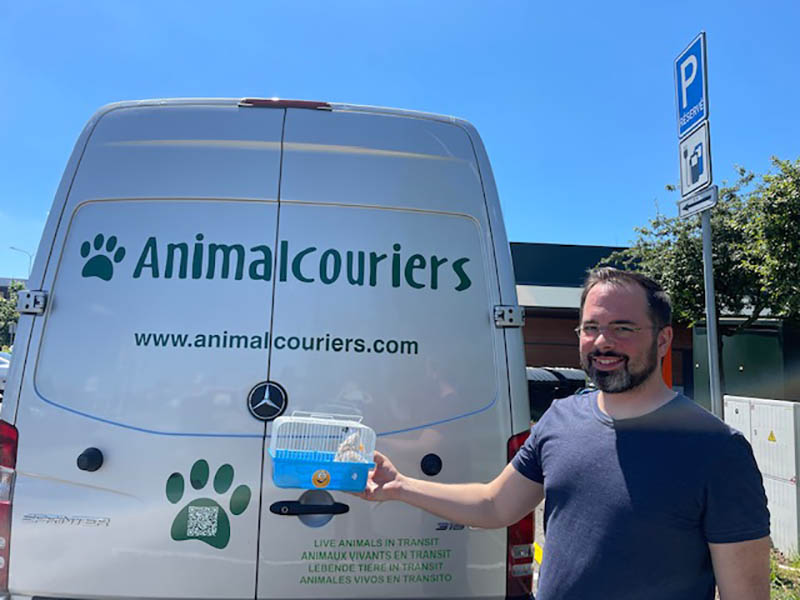 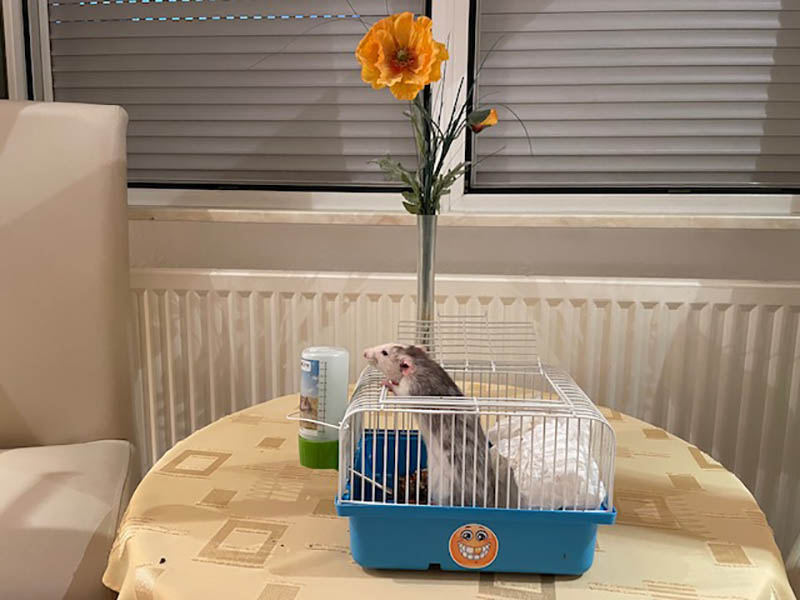 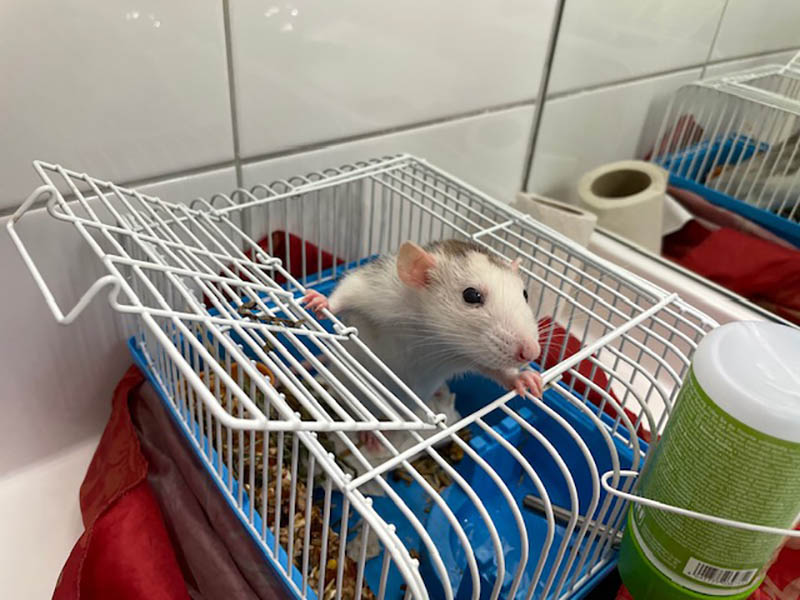 Lili popping up to say hello 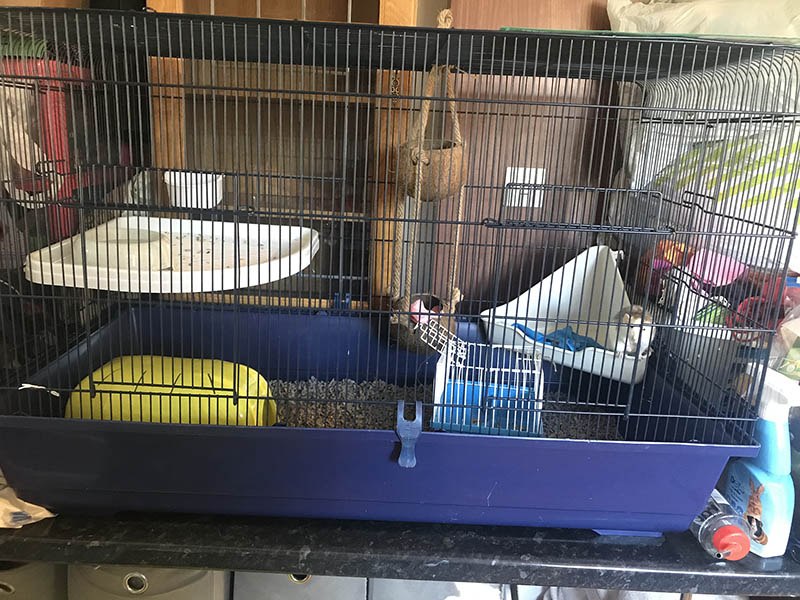 Lili at her new home 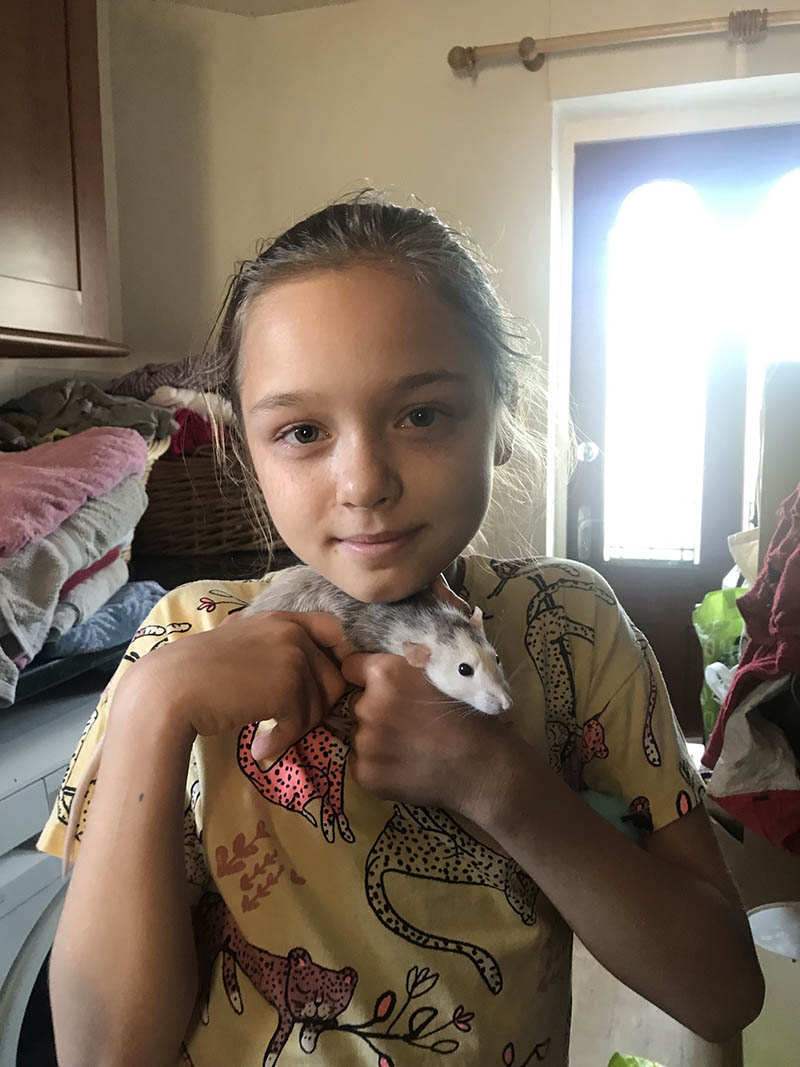 Reunited with her owner 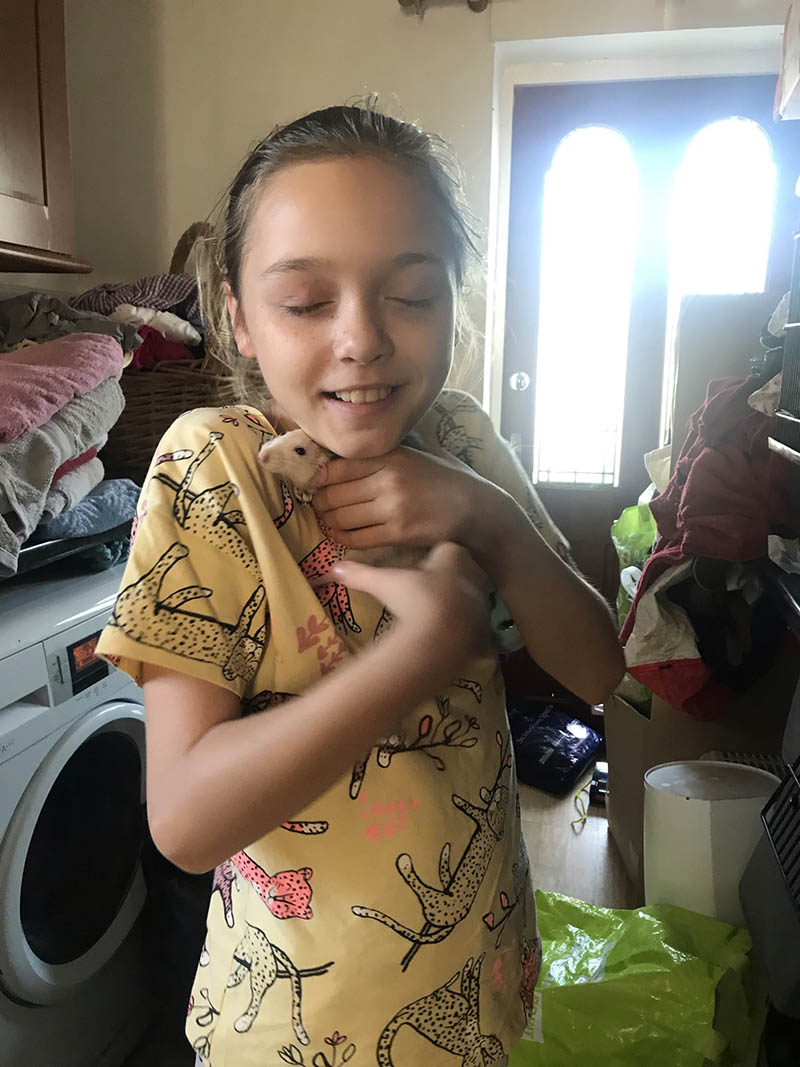 Jessy, a dog from Slovakia to Bedford

Having fled Ukraine with her gorgeous Cocker Spaniel Jessy, Kateryna left her in the care of friends in Bratislava while she made her own way to the UK. There, she met her sponsors, Pat and David.

We collected Jessy in Bratislava for her journey to Calais. Courier Gwen stayed in touch with Kateryna so she knew how her precious Jessy was faring every step of the way. 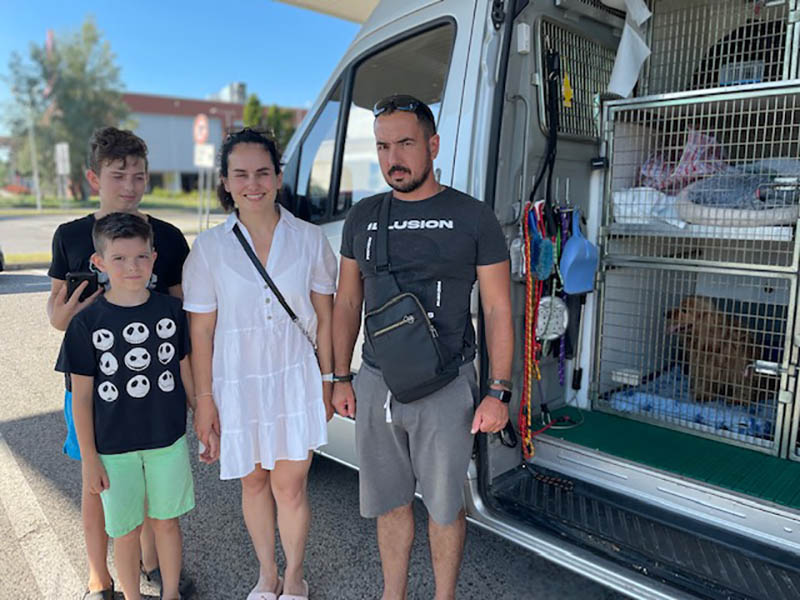 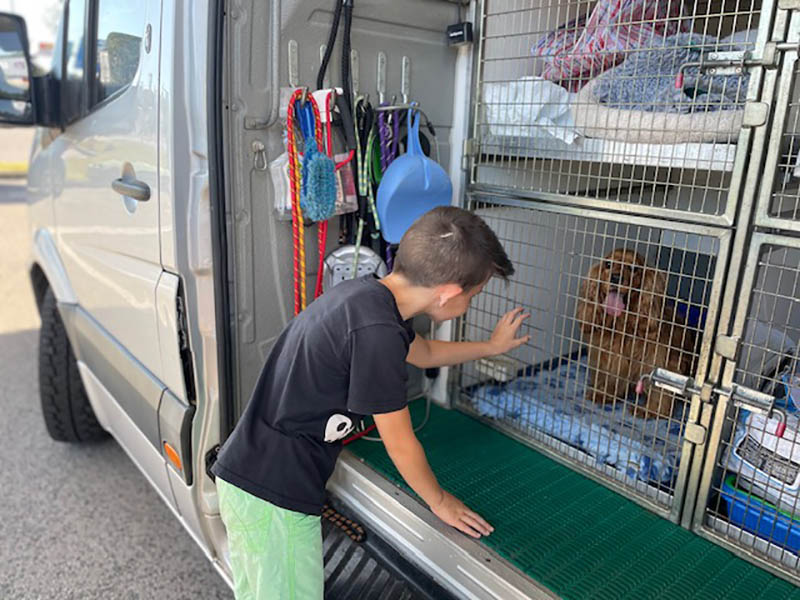 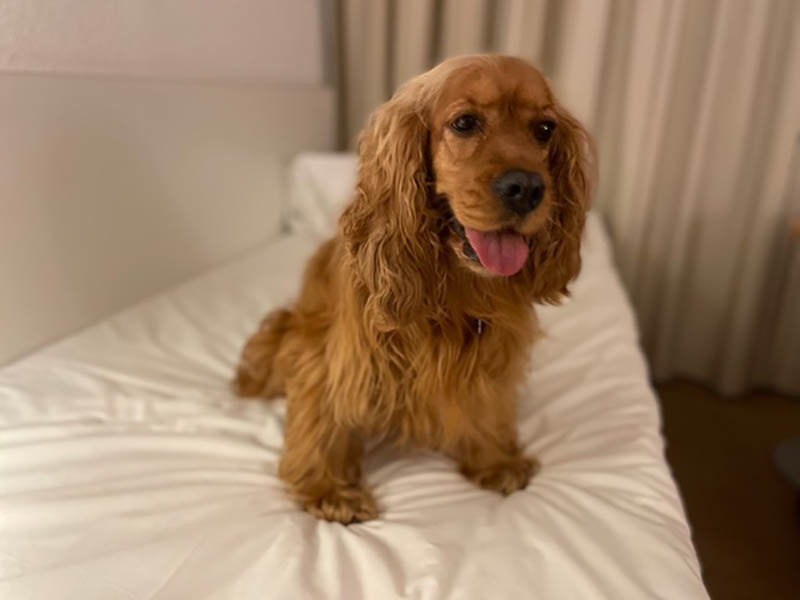 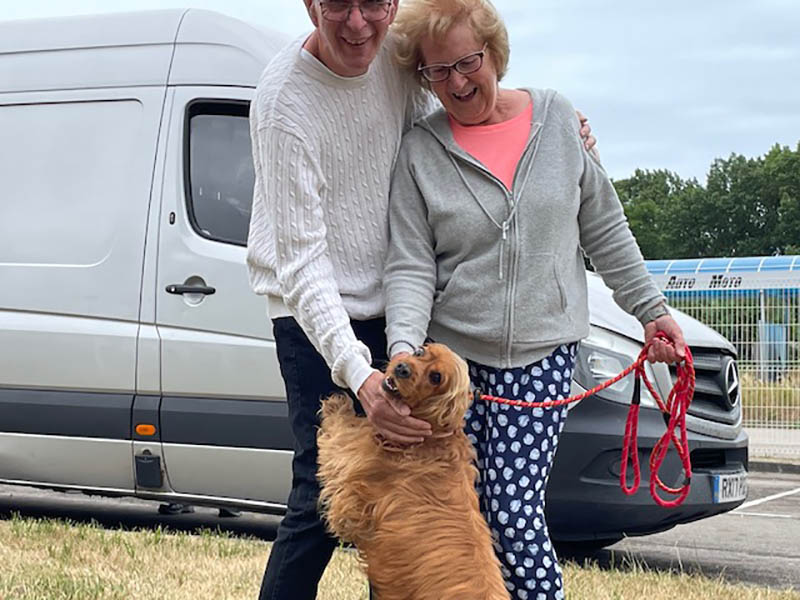 The terms of Kateryna’s visa meant she couldn’t travel to Calais to meet Jessy, so her sponsors Pat and David came instead 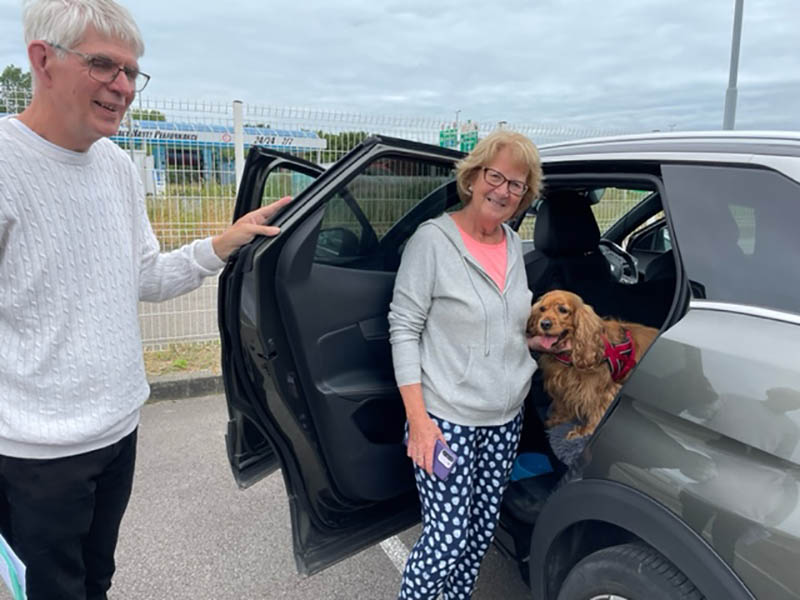 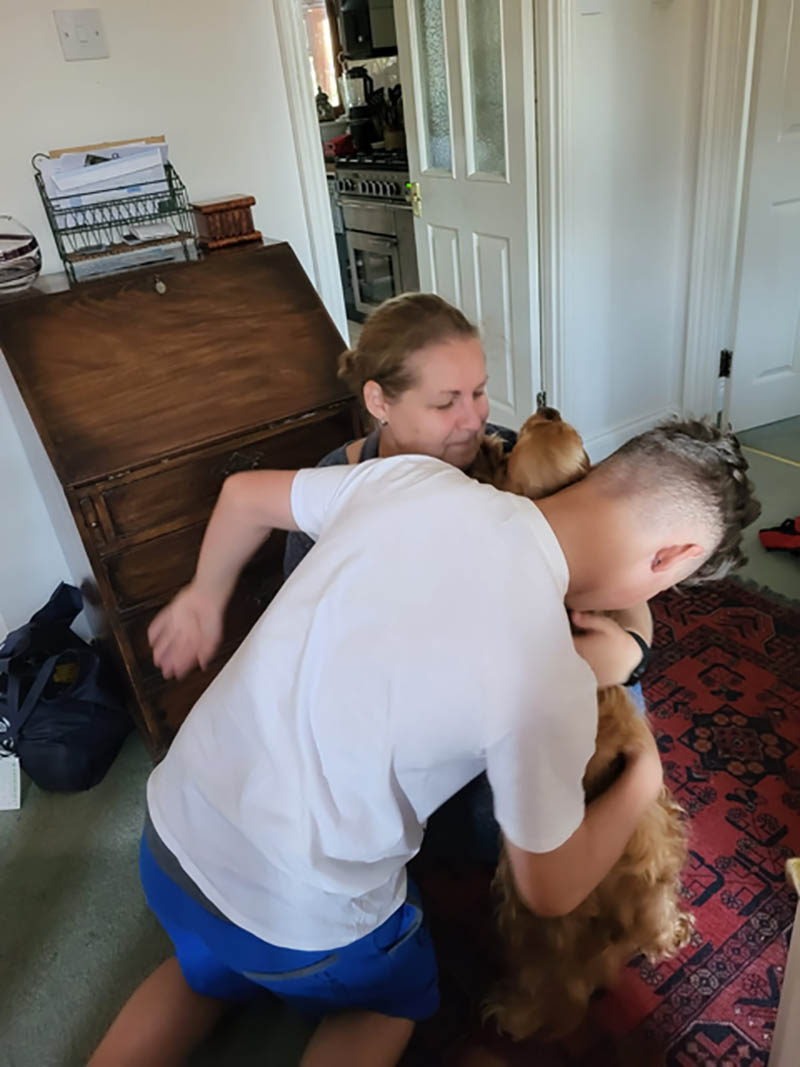 What a reunion for Jessy with Kateryna and family!

Claudia and Zosia, 2 cats from Poland to North Yorkshire

On the outskirts of Warsaw we met up with Robert, whose delightful black cats Claudia and Zosia travelled with us to England. 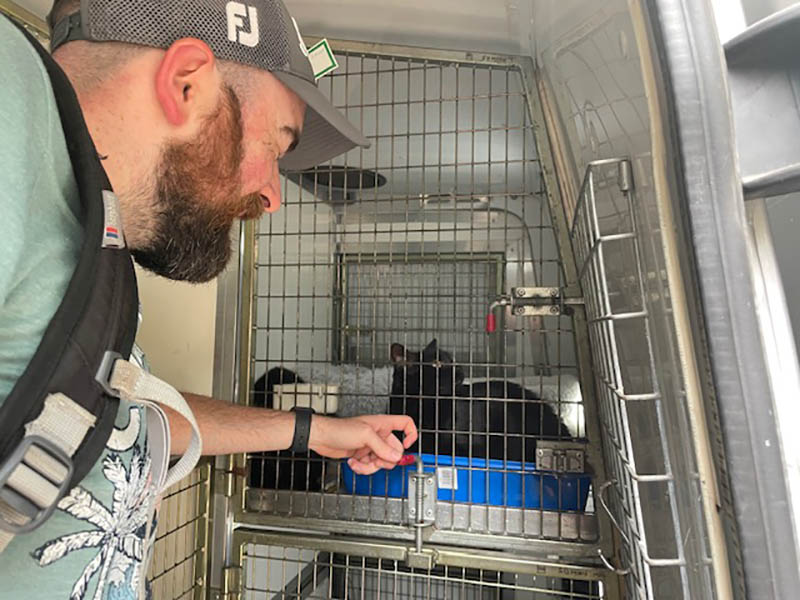 Robert seeing Claudia and Zosia away. A friendly pair who were happy to share a bedroom in our van.

Chucha, a cat from Poland to West Sussex

Yulianna’s cat Chucha was a late addition to our trip. Yulianna, already in England with her sponsors Clive and Yvonne, had left her cat in the loving care of her daughter in Warsaw. 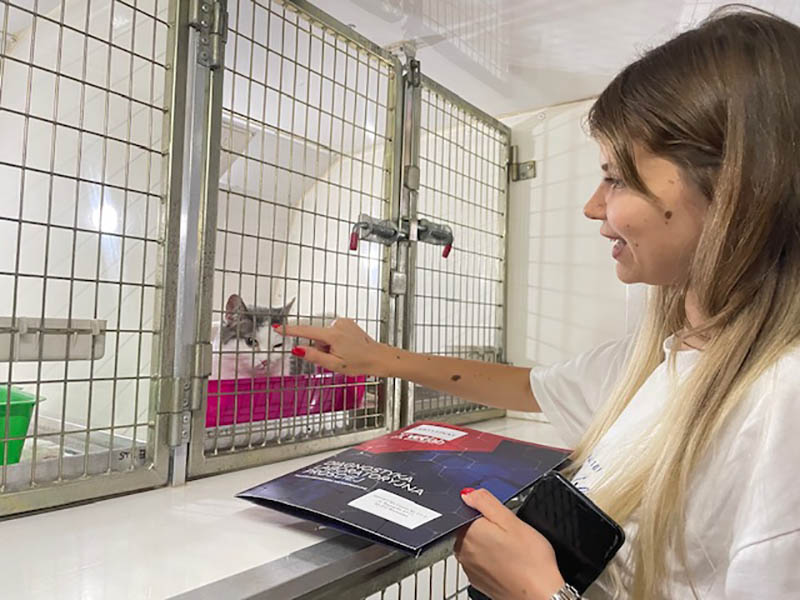 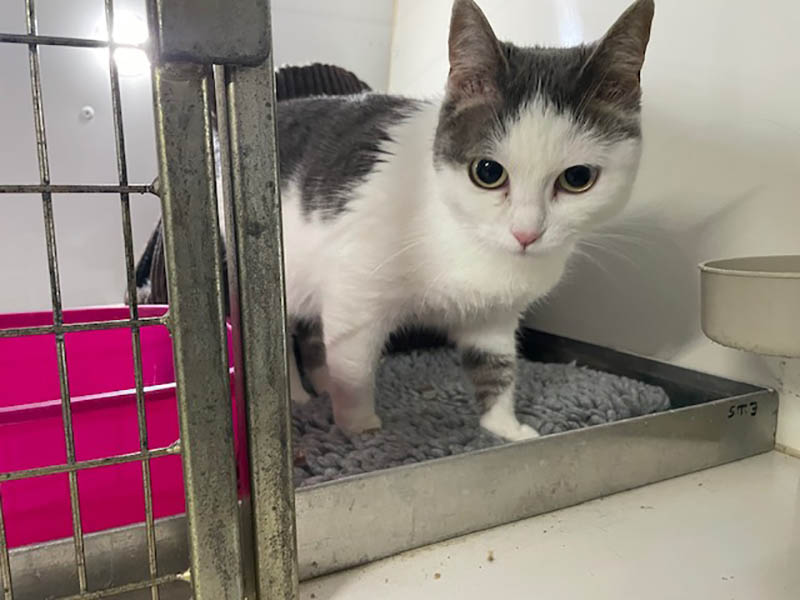 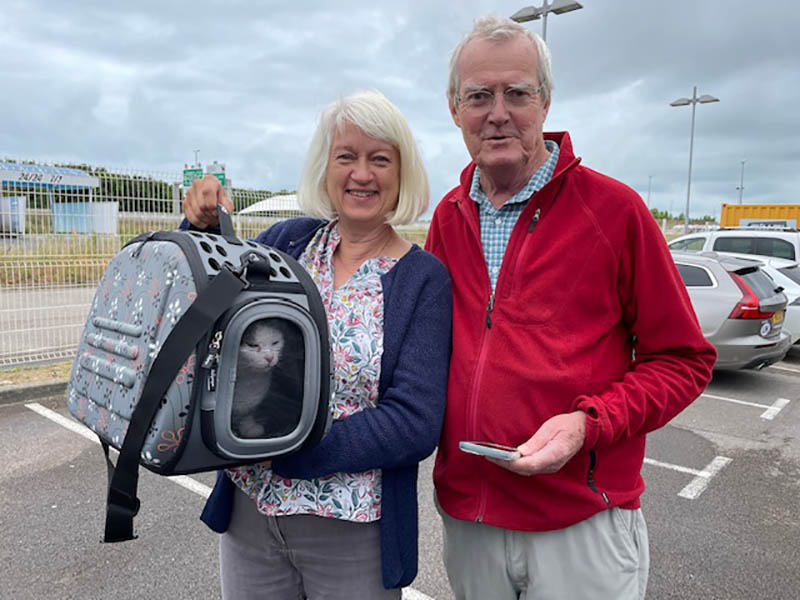 Like Kateryna, Yulianna wasn’t able to travel to Calais, but her sponsors Clive and Yvonne came over to collect Chucha from us

Markiza, a cat from Poland to London

Silver tabby Markiza belongs to Anna. It was a quick goodbye in Warsaw as Anna had to dash to catch her flight to the UK. 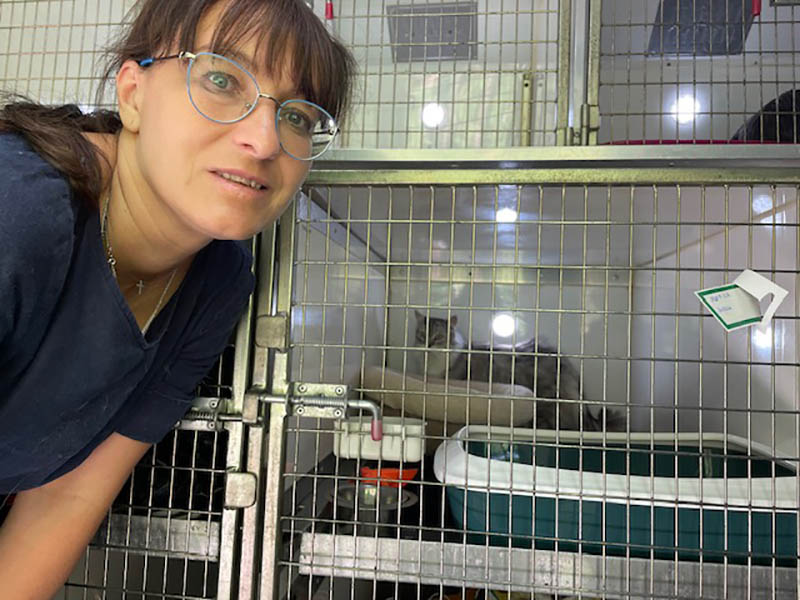 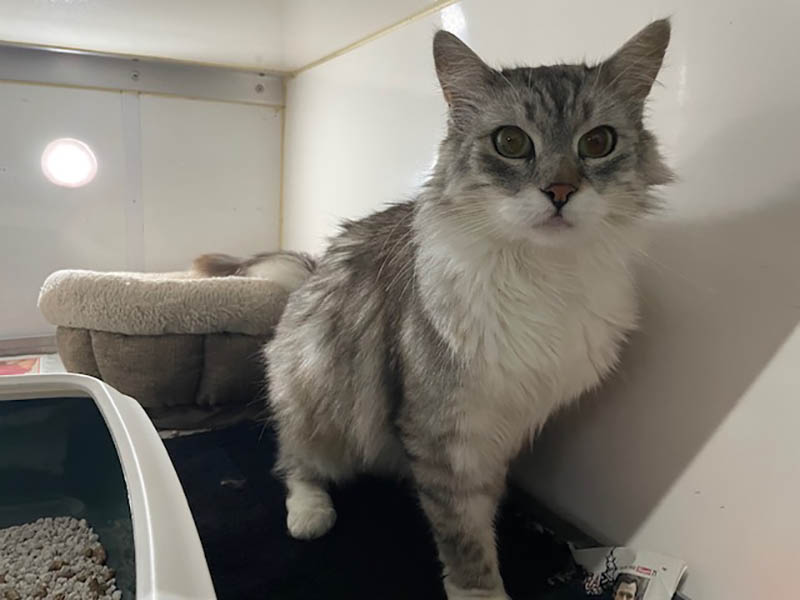 Sima, a cat from Poland to Buckinghamshire

We collected Anastasia’s Norwegian Grey cat Sima from Ivona’s Hotel 4 Pets in Warsaw — the same splendid pet hotel where tortoise Nimo stayed. Anastasia was already in the UK at the home of her sponsor Juliet.

A late change in APHA guidelines meant that a pet’s owner or their sponsor should be in attendance when a Ukrainian pet crosses the border into the UK with its special licence. Unfortunately, Anastasia’s visa didn’t allow her to travel, and Juliet was also unable to be present.

Anastasia had to decide whether to reapply for Sima’s special licence (but the first one had taken two months to come through), or request special permission for Animalcouriers to bring Sima in on her behalf. Fortunately, APHA understood Anastasia’s extreme situation and allowed Sima to travel with us so that she could be reunited with Anastasia.

Over the moon, Anastasia posted a heartfelt message on Facebook to give hope to other Ukrainian families working hard to get their pets into the UK:

“Transporting a pet to Britain was one of the most stressful experiences of my life. There were so many requirements and conditions changing all the time! Now, however, my pet is there, purring happily and playing with me. A while ago that seemed impossible. The most difficult part was the logistics — my cat was in Poland the whole time while the licence was being prepared. And when we received the licence, it turned out that it’s impossible to plan the route and find transport for cat and a traveller without a private car according to the conditions of licence. To our great joy, Animalcouriers came to our rescue. They picked up our cat from Poland, built a route specifically according to APHA requirements and brought our cat straight home. They made it possible, and I am very grateful for all the support, understanding and willingness to help that they gave me. Despite the many difficulties we encountered, our pet was reunited with us. All the worries are now behind us. I would like to thank Animalcouriers and also show my support to all the people who are now looking for ways to bring in their pets. Don’t give up hope of being reunited with your furry friend. Seeing your beloved little one nearby, safe and happy is definitely worth to give it a go!” 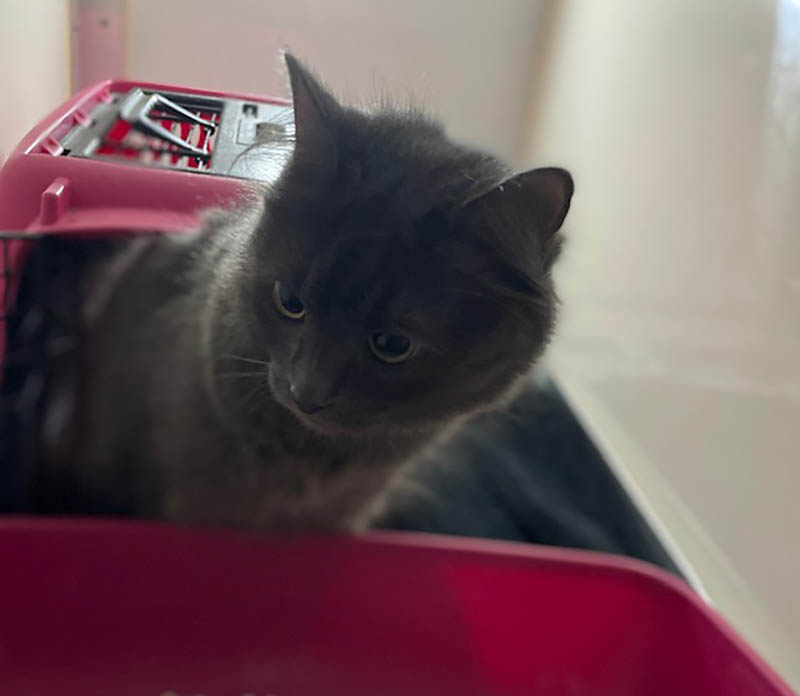 Adorable Sima on board with Animalcouriers 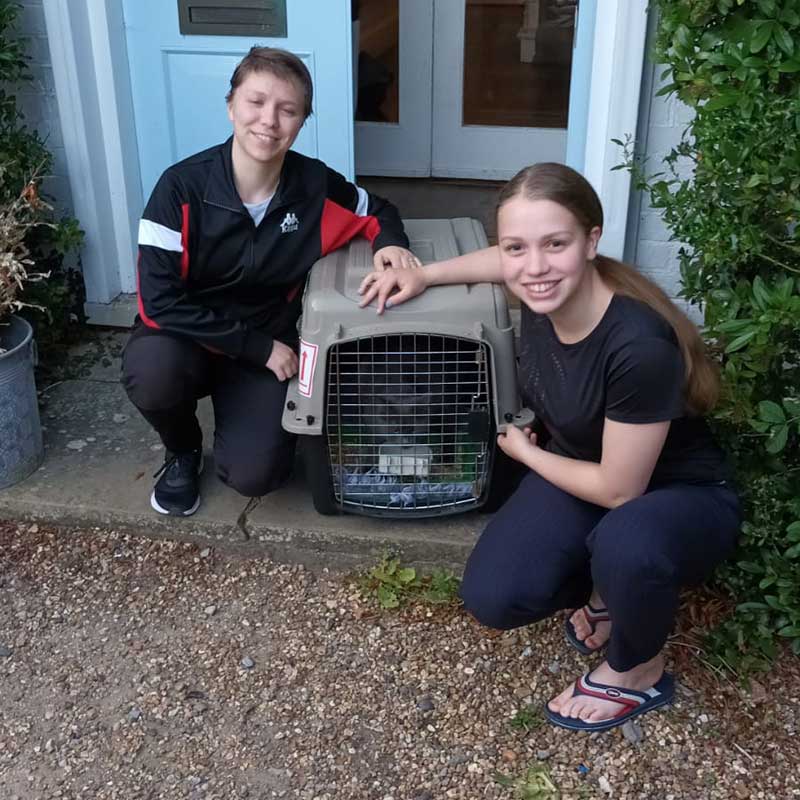 Sima at her new home in the UK. Anastasia said: I just wanted to thank you one more time for helping with Sima. We missed her so much and it was such a relief to finally meet her. You made this happen — thank you so much! 🤗🥰🐈‍🐾🌻

Jessi, a dog from Calais to Scotland

Already en route for Calais with our Ukrainian passengers from Czechia, Slovakia and Poland, we heard about Olha, her mum Daria and their dog Jessi, a Springer Spaniel. Originally from Mariupol, Olha was studying economics in Kharkiv before she and her mum decided to leave Ukraine with Jessi and head for the UK.

They needed transport from Calais to Dover, where they would meet their UK sponsor Clare, who was driving down from Glasgow to collect them.

Courier Gwen was waiting in her hotel at Calais to hear that Olha, Daria and Jessi were nearby. With no news, she became worried and called Olha. Olha explained that she and her mum had only made it as far as Brussels, their previous train having been delayed; and now they wouldn’t reach Calais station until late. Olha said they would try to find a taxi to bring them to the hotel. Courier Gwen immediately offered to meet them at Calais station. She says: “When they stepped off the last train of their long journey, with four large suitcases in tow, and their dog’s crate, I realised how much these women had gone through to make it to Britain and still be positive and thankful for what they have, especially for Jessi.”

The next morning, things were brighter, with Olha and Daria alongside courier Gwen in the Animalcouriers van and Jessi safely in her bedroom in the back. 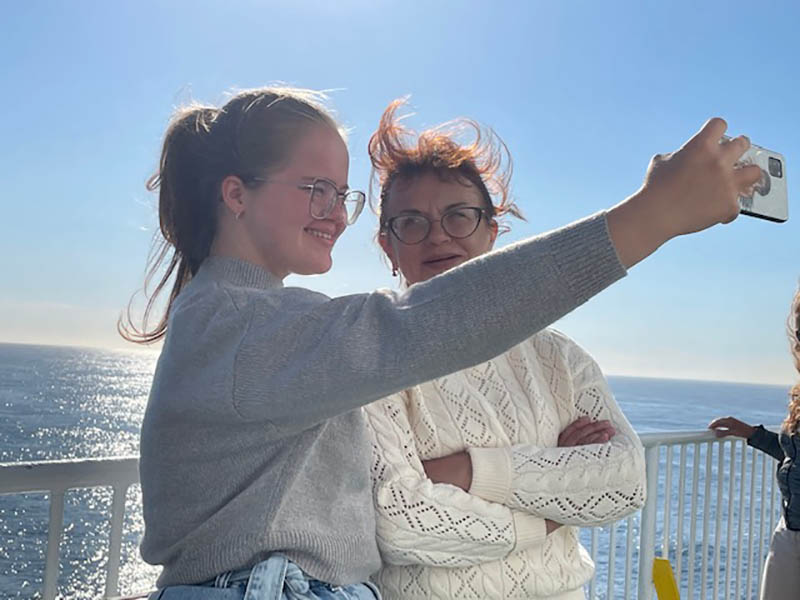 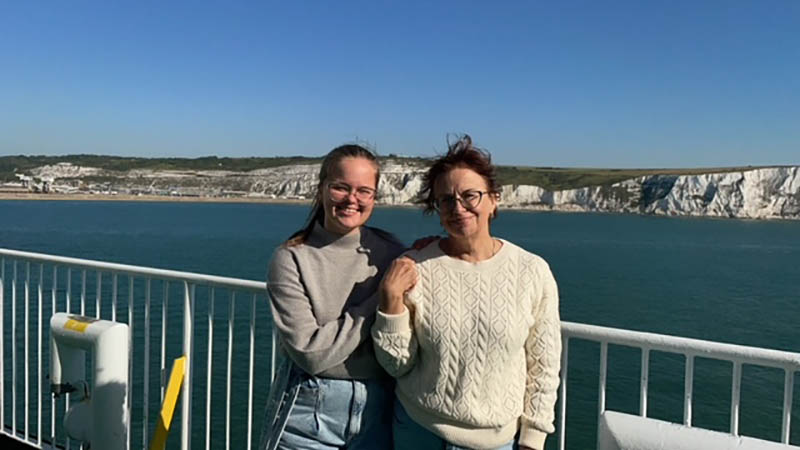 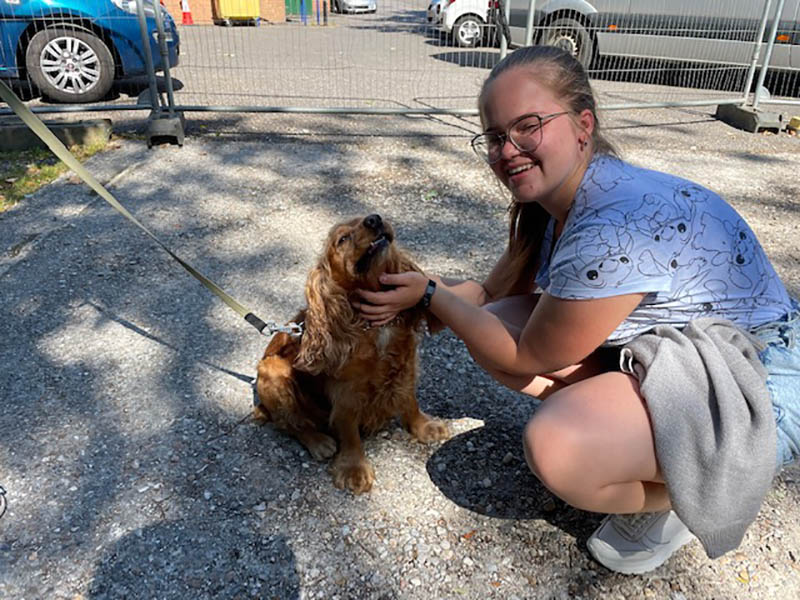 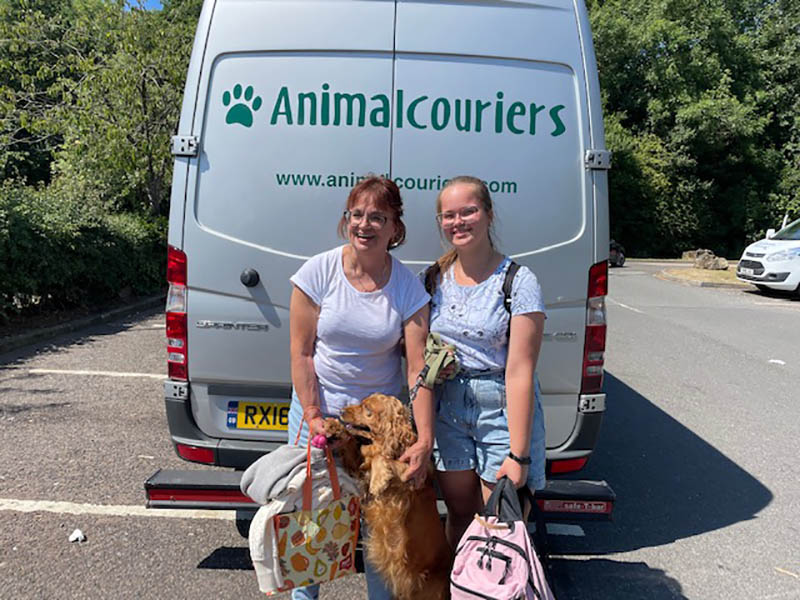 Olha and Daria with Jessi, waiting to meet sponsor Clare for the first time 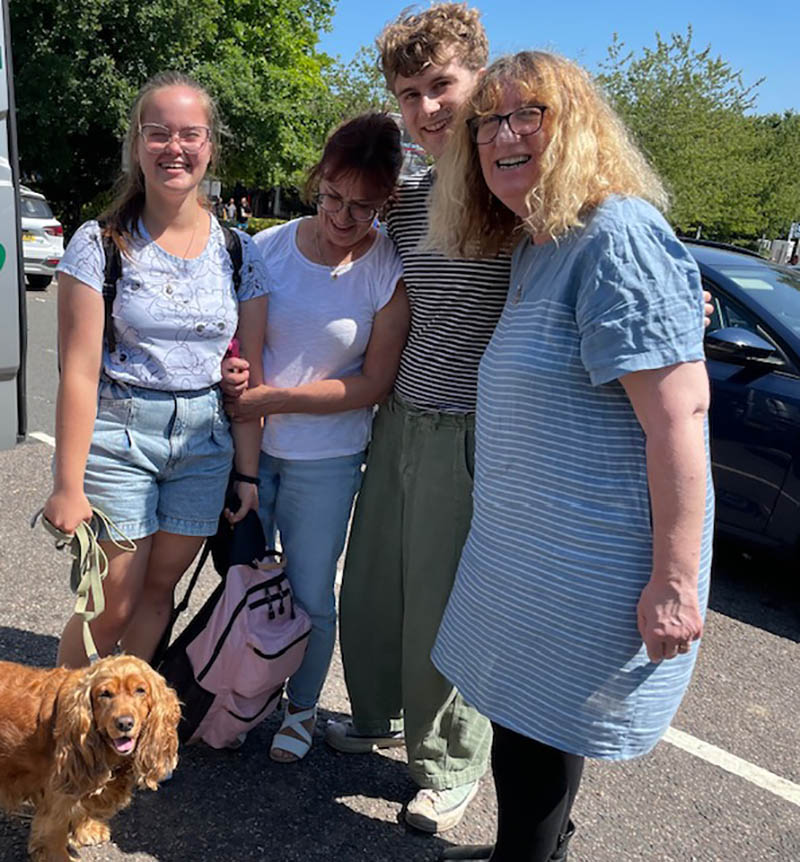 Olha, Daria and Jessi with their sponsors Clare and Fergus, ready to make the last leg of their journey to Scotland