The Calais 5 from Ukraine are free and home at last

The Calais 5 from Ukraine — two dogs and three cats — have at last reached their new UK homes.

Animalcouriers collected these five pets in Warsaw on 21 April on the strength of a phone conversation with the UK government’s Animal and Plant Health Agency (APHA), who assured us they would be granted licences to enter the UK.

However, by the time we reached Calais with dogs Ricci and Leia, and cats Snowy, Scruffy and Toffee, all the UK’s quarantine spaces had been allocated. So the pets weren’t allowed to cross the Channel to the UK.

Disappointed to say the least, we placed the pets in a kennels and cattery in Calais run by friends, hoping for better news soon.

However, nothing seemed to happen, and we became concerned that APHA had lost sight of the pets’ need to travel to the UK. The families were struggling with stress and worry about the seemingly uncaring attitude towards their pets, and not knowing when they might be reunited.

Animalcouriers took the responsibility for these five Ukrainian family pets very seriously. Courier Gwen travelled back to Calais to check on them and update their families about their welfare. We also covered all the costs associated with their move from Warsaw through to their arrival in the UK.

Eventually, with no response to calls, emails and letters, we asked our MP to intercede on the families’ behalf. Paul, the UK sponsor of Leia’s family, did the same. Suddenly, things started to move, the silence was broken, and the licences were received. The pets were given permission to travel to the UK with home isolation in place of a stay in quarantine kennels.

So we set off for Calais to collect the pets and were able to reunite Ricci, Leia, Snowy, Scruffy and Toffee with their families on 18 May, a month after we’d collected them in Warsaw.

Gorgeous Pug Ricci belongs to Olga, who was beside herself with happiness when she learned that Ricci was finally able to join her in the UK. When we confirmed we were on our way with Ricci, Olga said:

“Thanks a lot! I still can’t believe that it will be possible to hug Ricci tomorrow!”

Home isolation means Ricci can’t go out of his home environment for three months, but he’s allowed to run around Olga’s little garden. 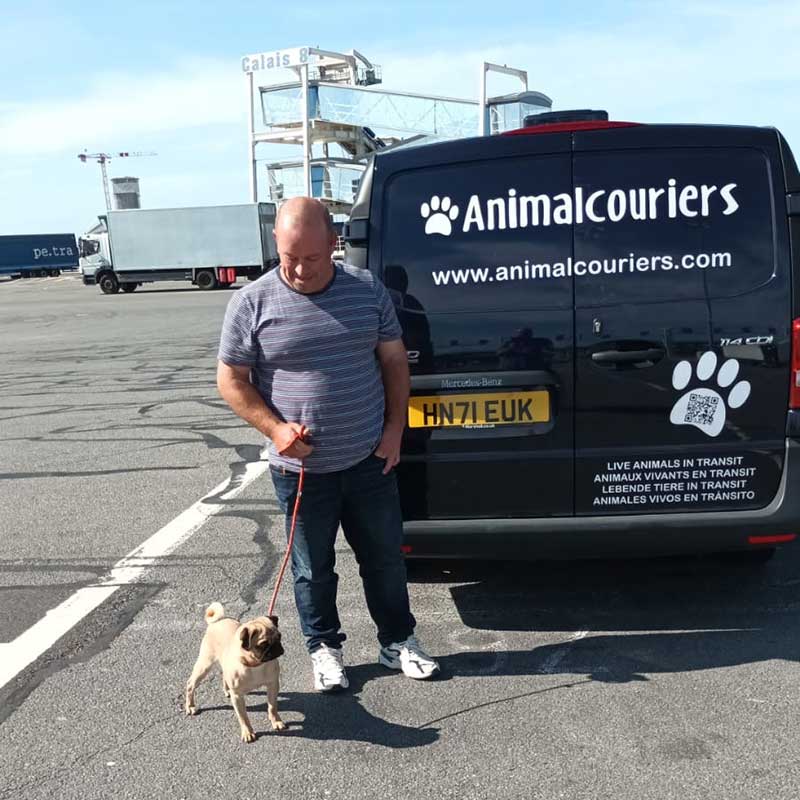 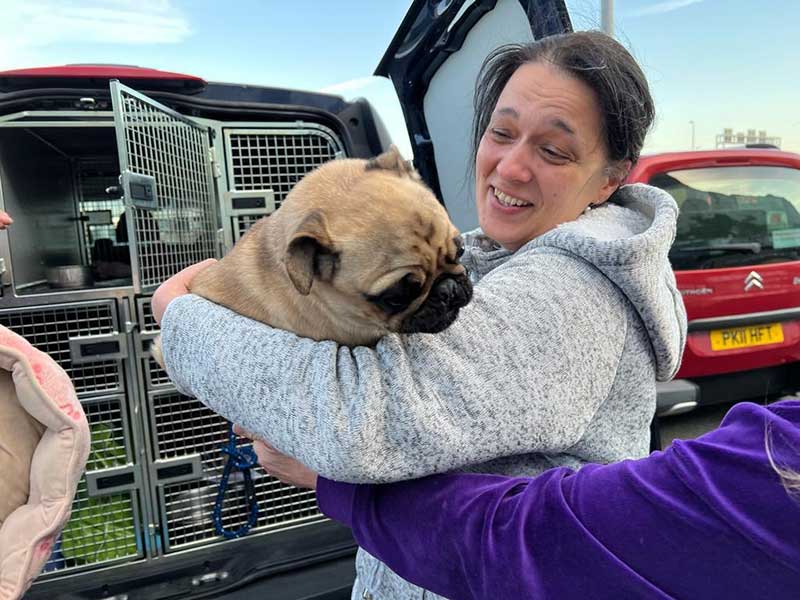 Ricci reunited with Olga in Dover 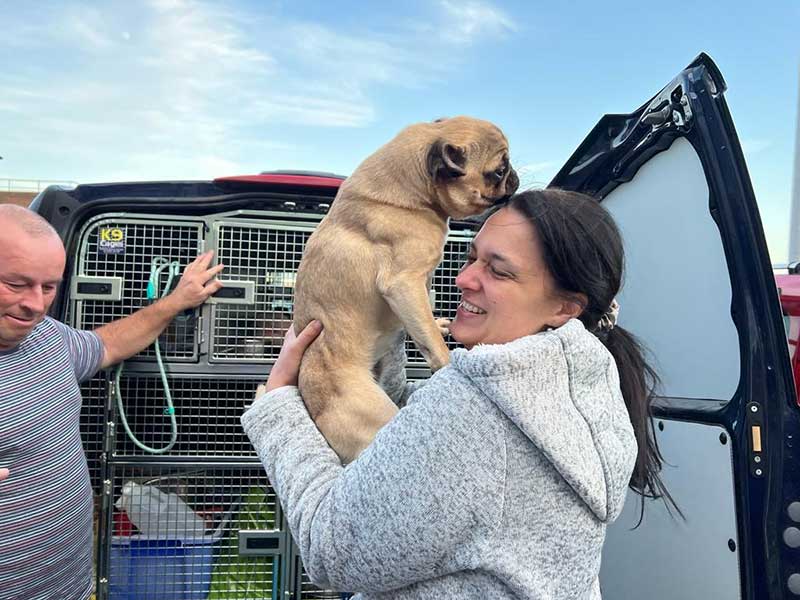 What a wriggly fellow! 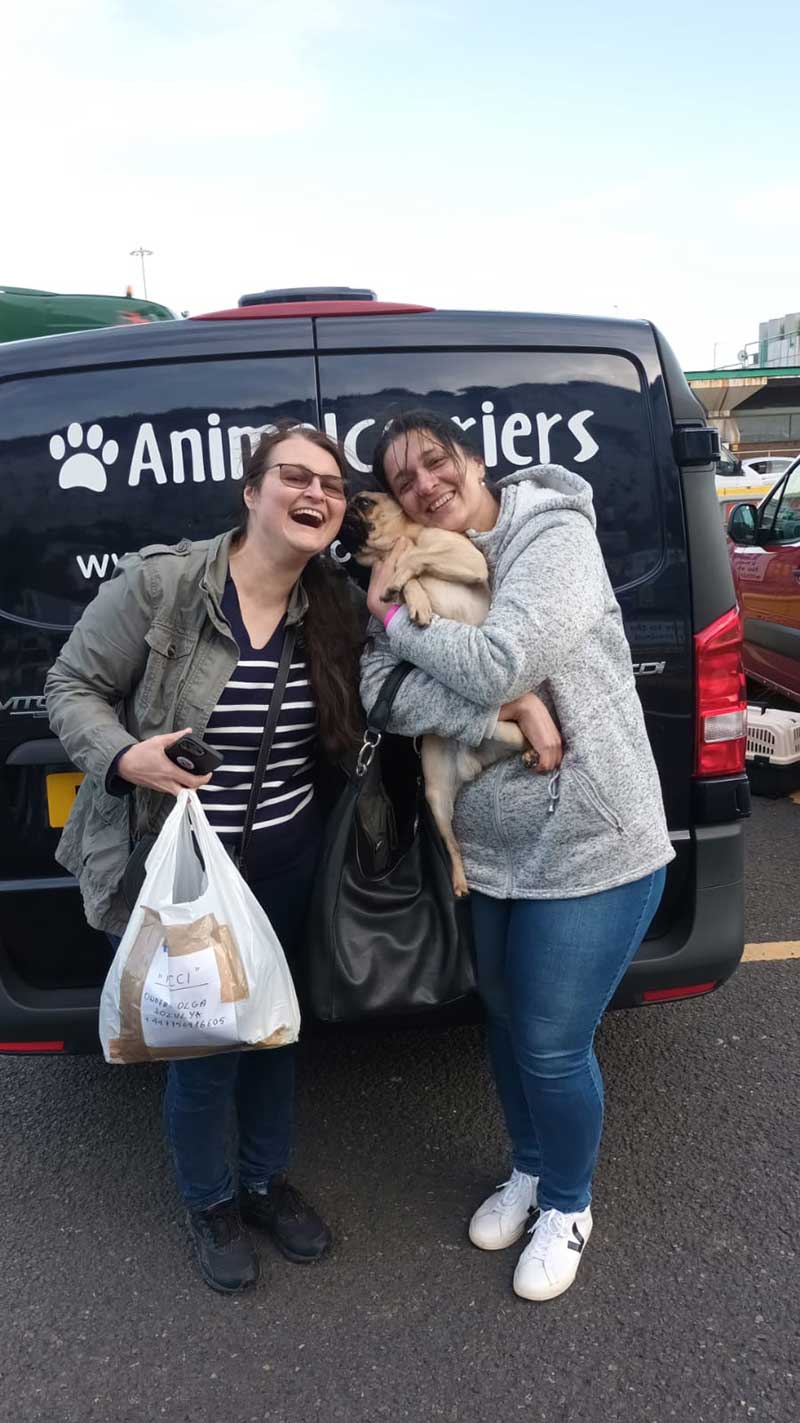 Olga wrote to say: “Thank you for bringing Ricci to me, we are so happy.”

These three adorable sibling cats belong to Liudmyla and family. 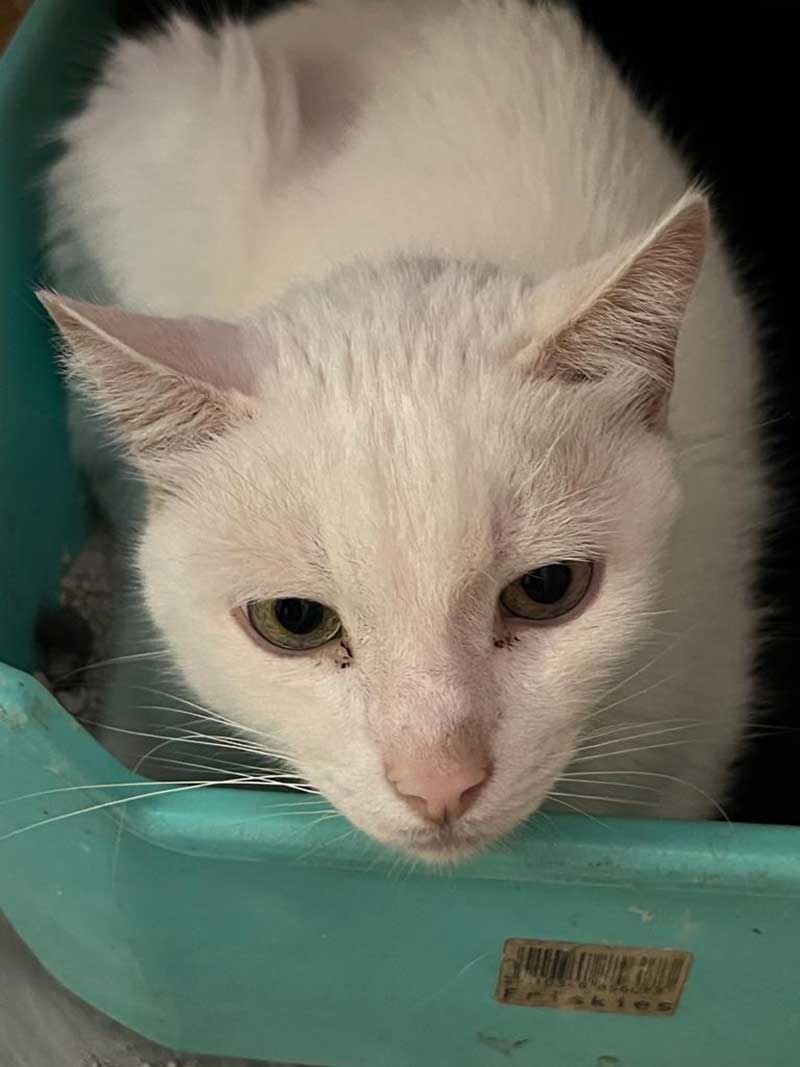 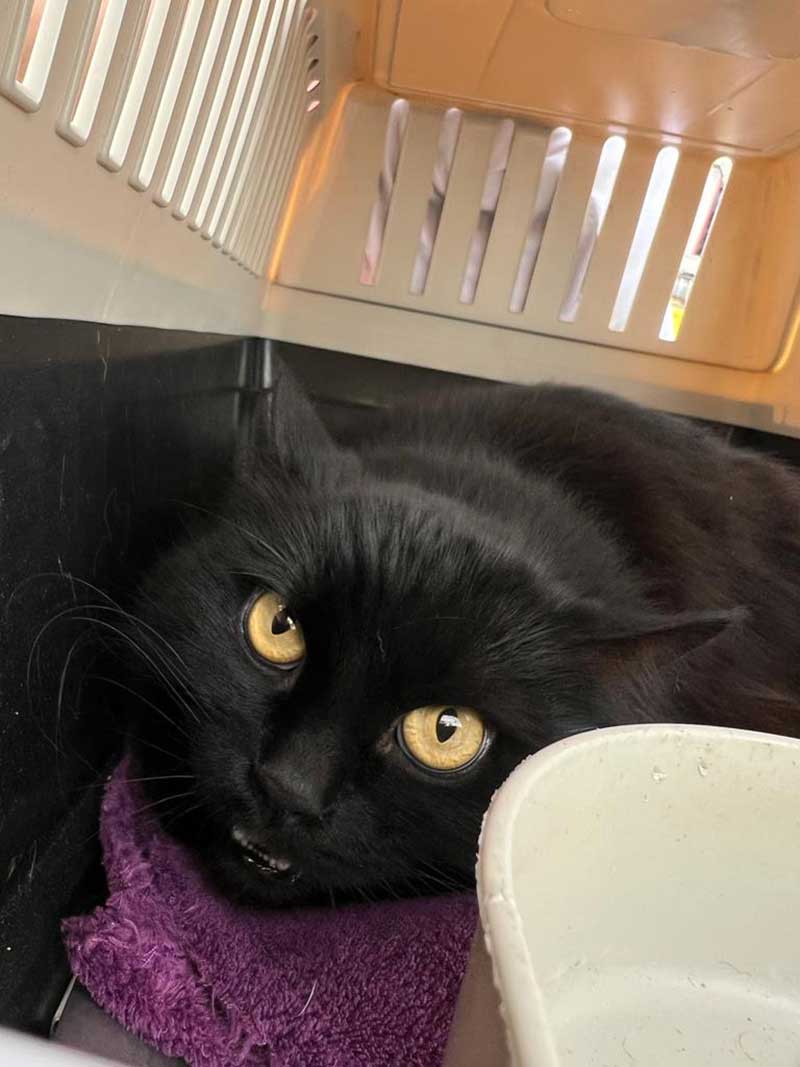 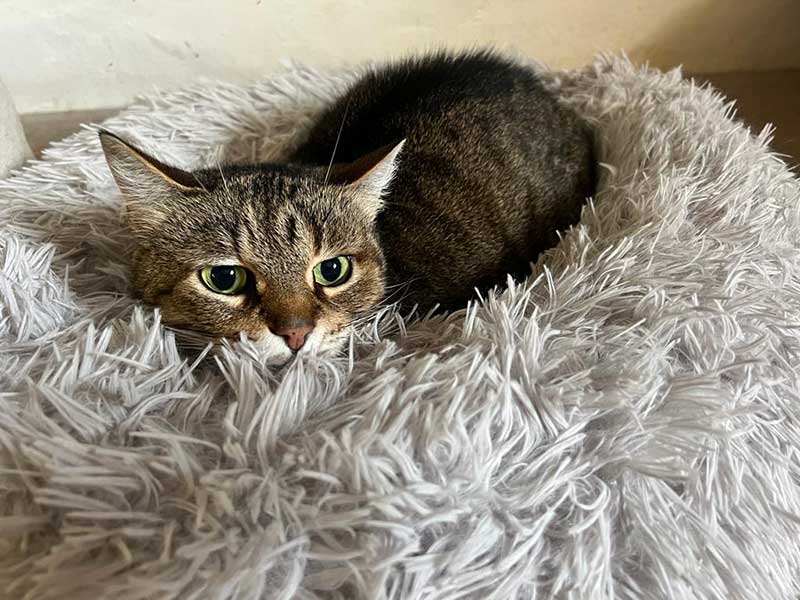 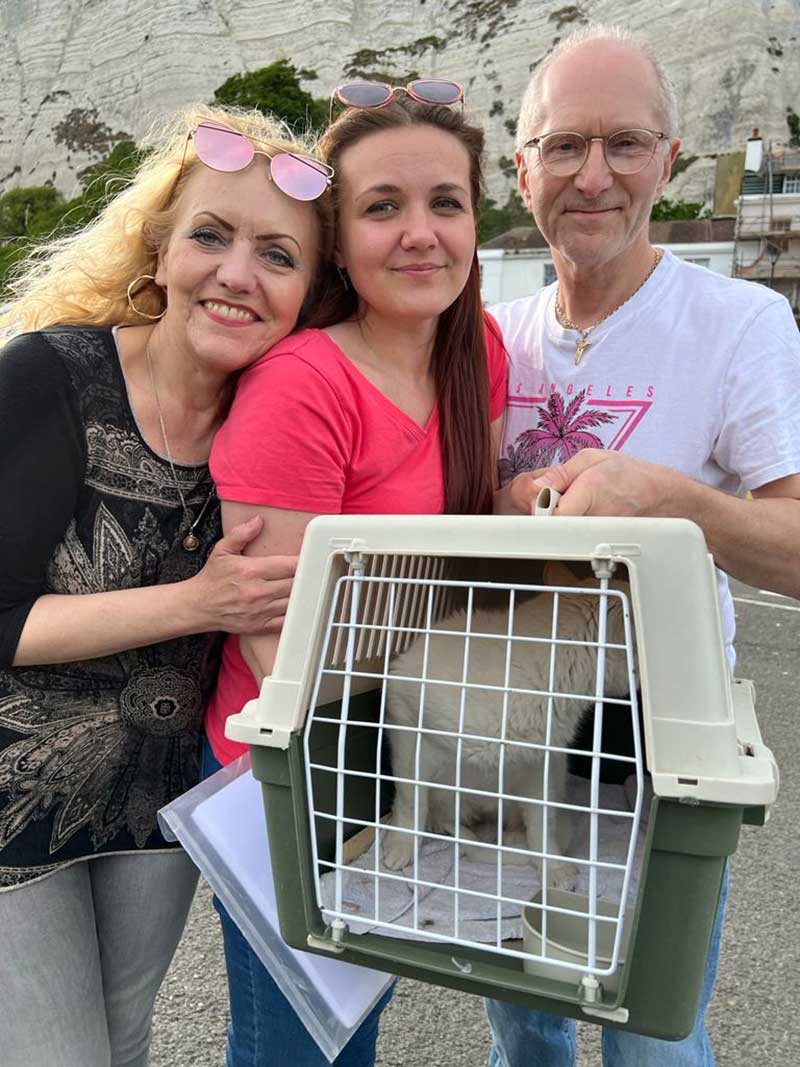 Broad smiles from Liudmyla, her daughter and brother-in-law, standing with Snowy in front of the white cliffs of Dover

Yuliia, Liza and Yelyzaveta at Dover looking out for the ferry with Animalcouriers and Leia on board 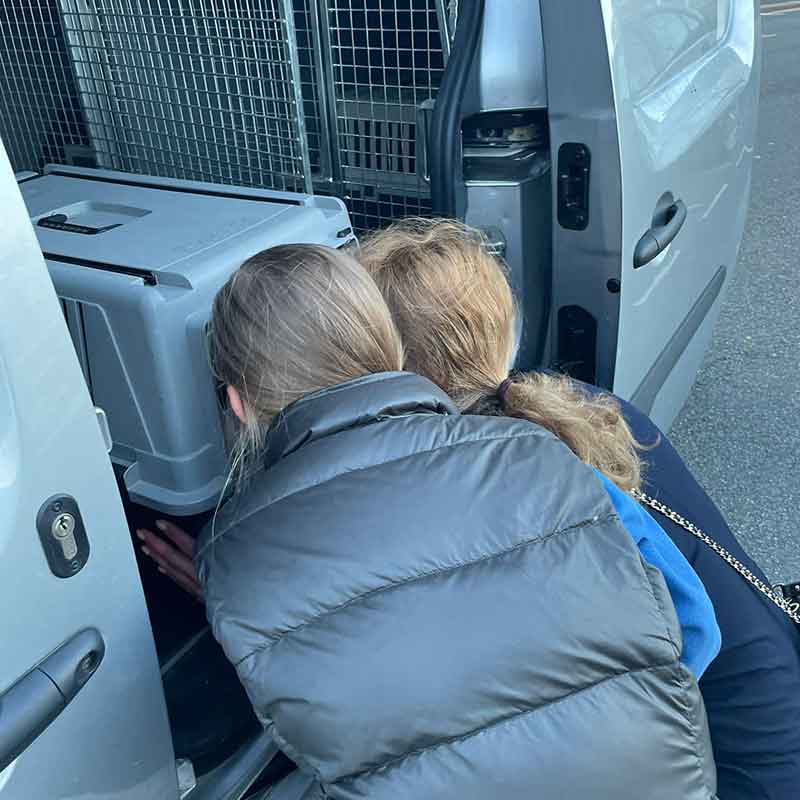 So pleased to see Leia again after such a long wait

Leia at her UK home — like Ricci, she’s isolating at home for three months. She has a little private garden for going out, created for her by sponsor Paul. Her family report that she has settled down very quickly and they are really pleased to have her home with them. 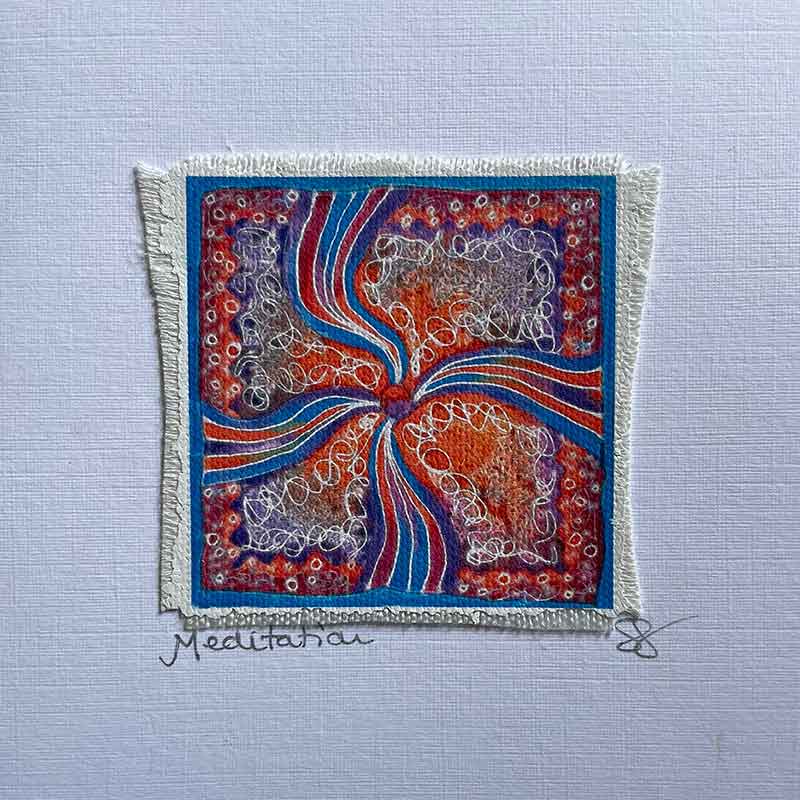 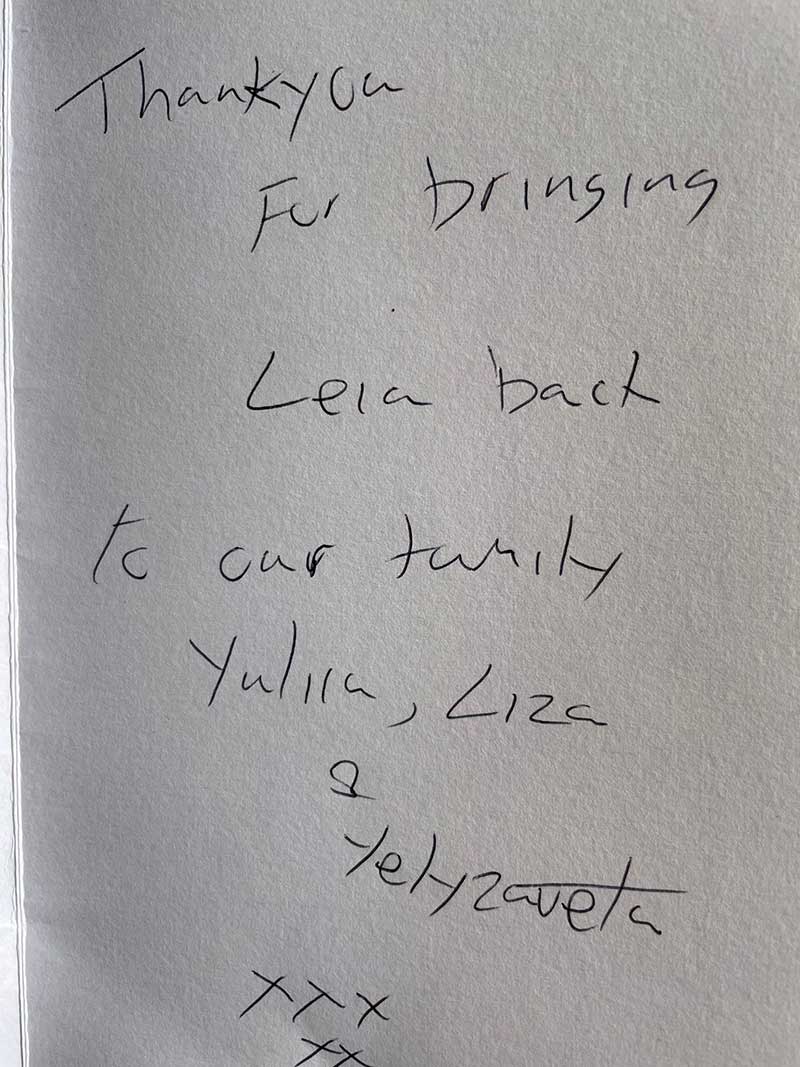 …accompanied by a very sweet note