Two Animalcouriers vans left the UK recently, travelling south through France, Spain and Portugal. Given the cold weather, with a wind chill of -5C, we chose the overnight crossing from Portsmouth with Brittany Ferries, to ensure that pets and couriers were somewhere warm for the night.

On arrival, Courier Marc took a westerly route towards Portugal through France and Spain, with two cats and five dogs on board. Meanwhile couriers M and Mathew drove down the eastern side of France on their way to Almeria via Barcelona, carrying five dogs, two cats and a pair of fancy rats. 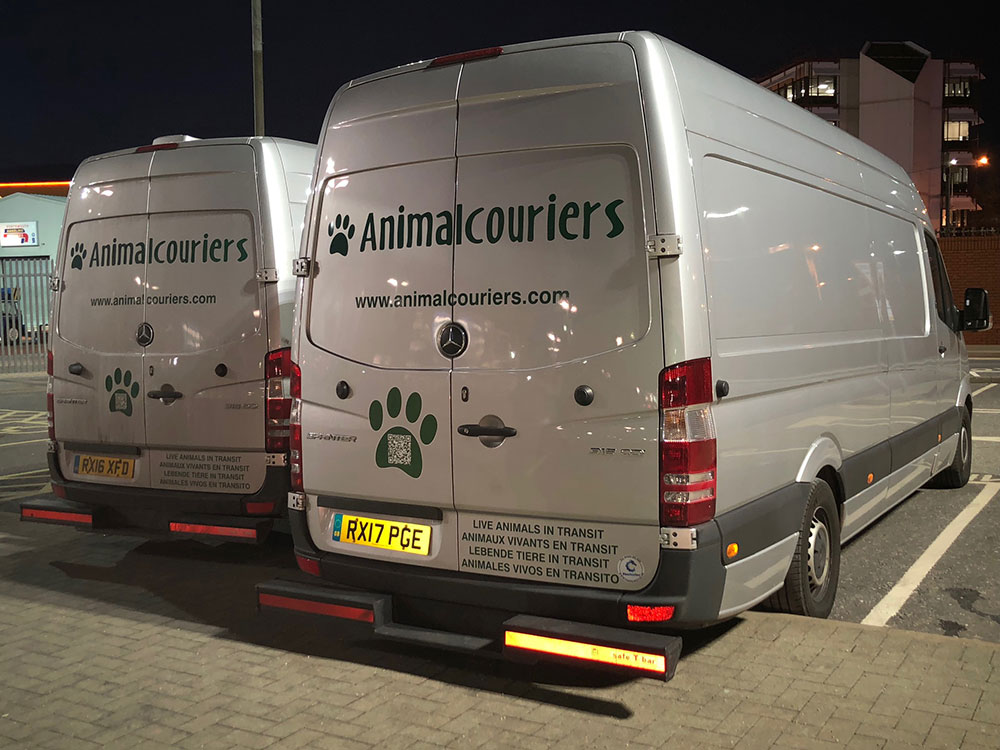 Our two vans waiting to check in at Portsmouth… 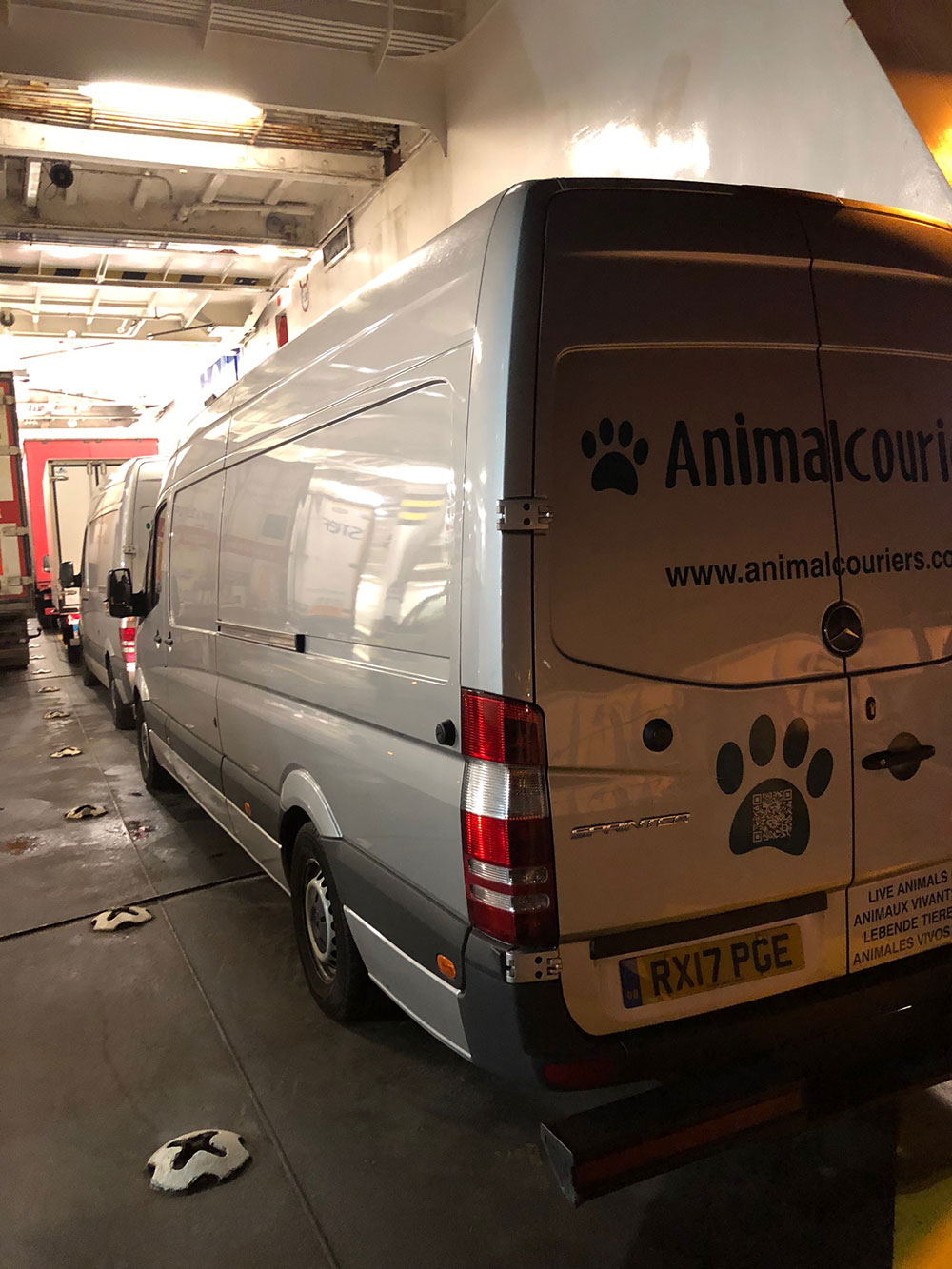 …and safely on board the ferry 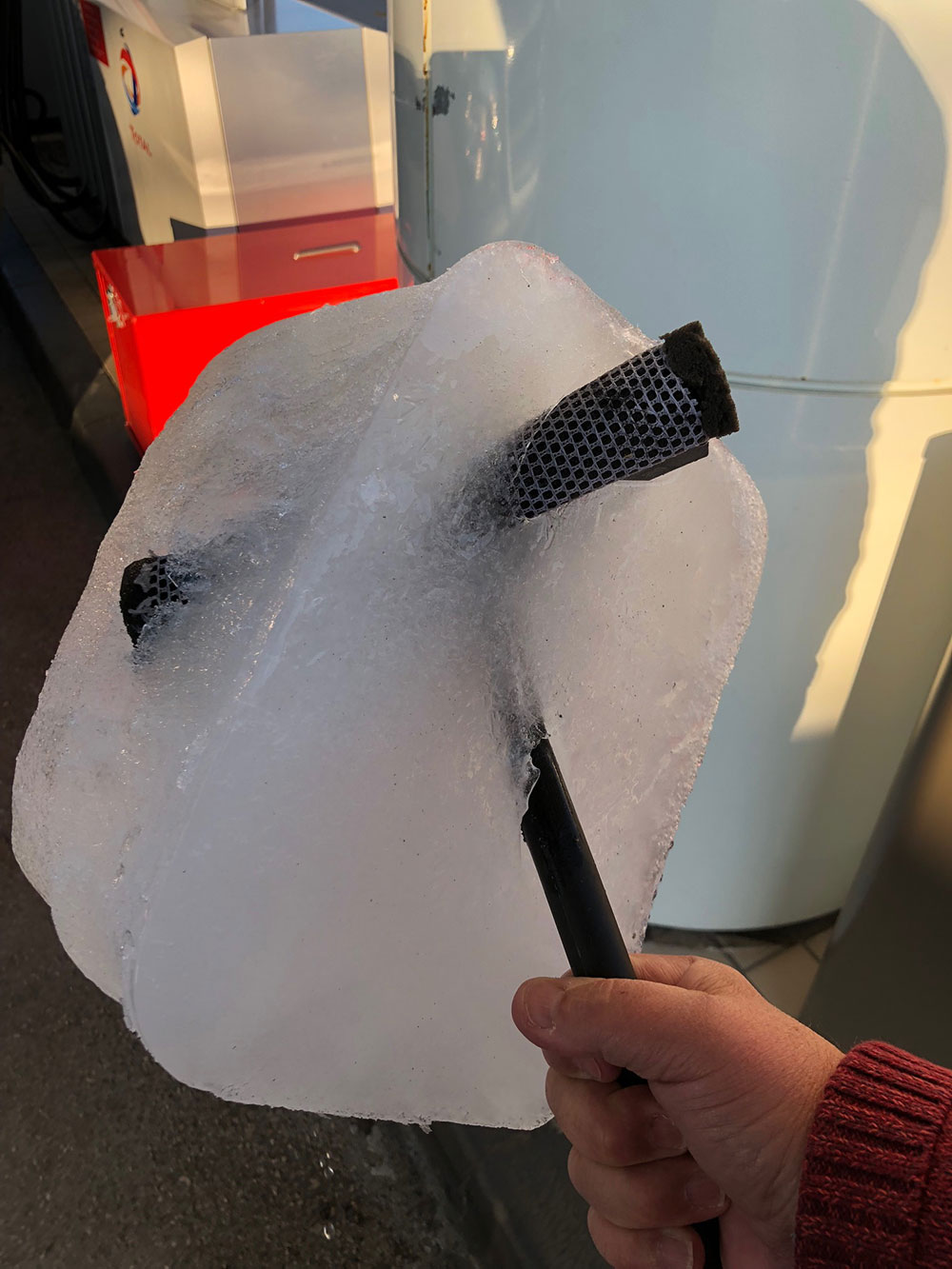 A sign of how cold it was in the middle of France — when we stopped for fuel, courier M noticed that the fuel station’s ice scraper had turned into an ice lolly! 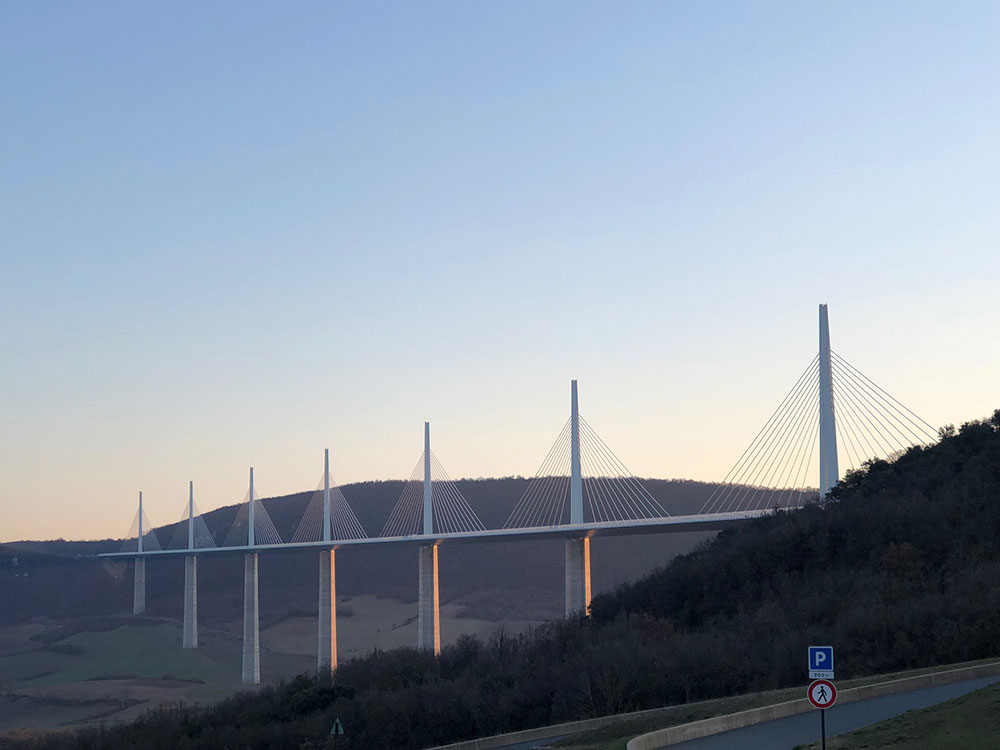 The Millau bridge striding across the landscape

Jet-black Utah belongs to Maria, who’s been working in Leeds for a while. Now she’s relocating back to Madrid with her beloved cat. 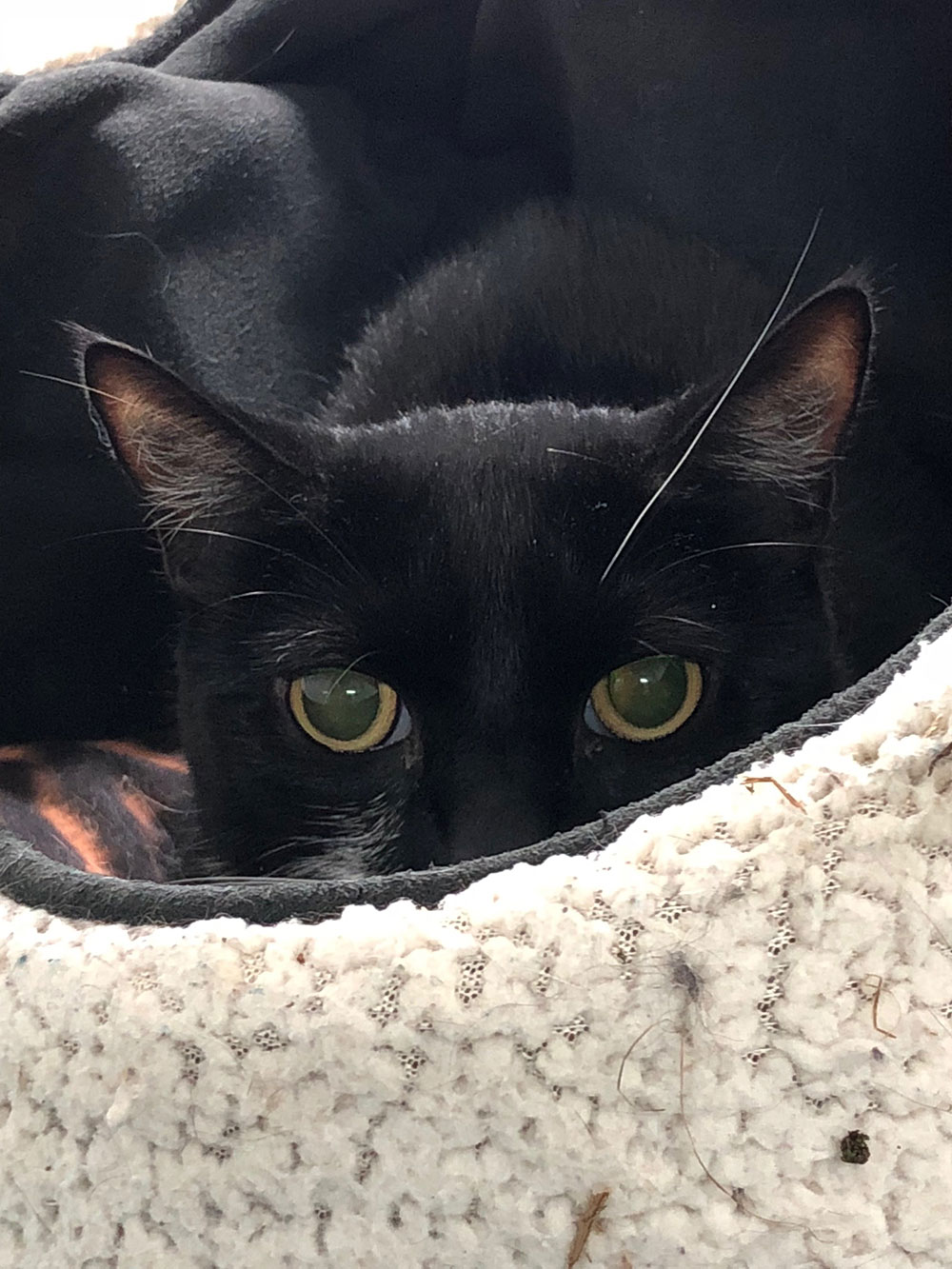 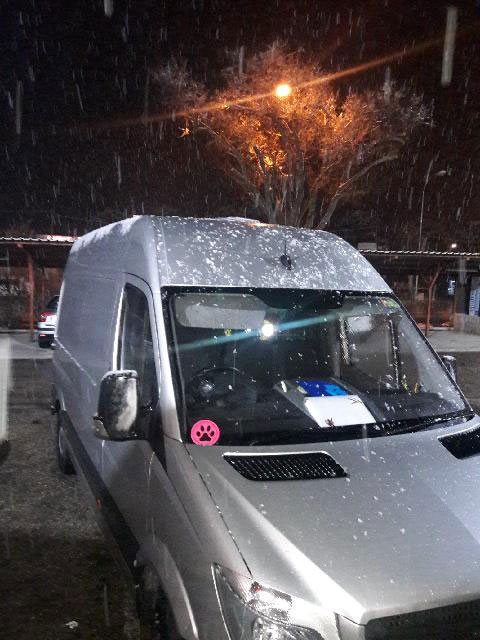 Snow awaited Utah in Madrid — so not much more clement than Leeds really!

An adorable pair of pugs, Spike and Millie belong to Deborah and family, who’ve relocated from London to Lisbon for work, and are very excited about their new jobs. 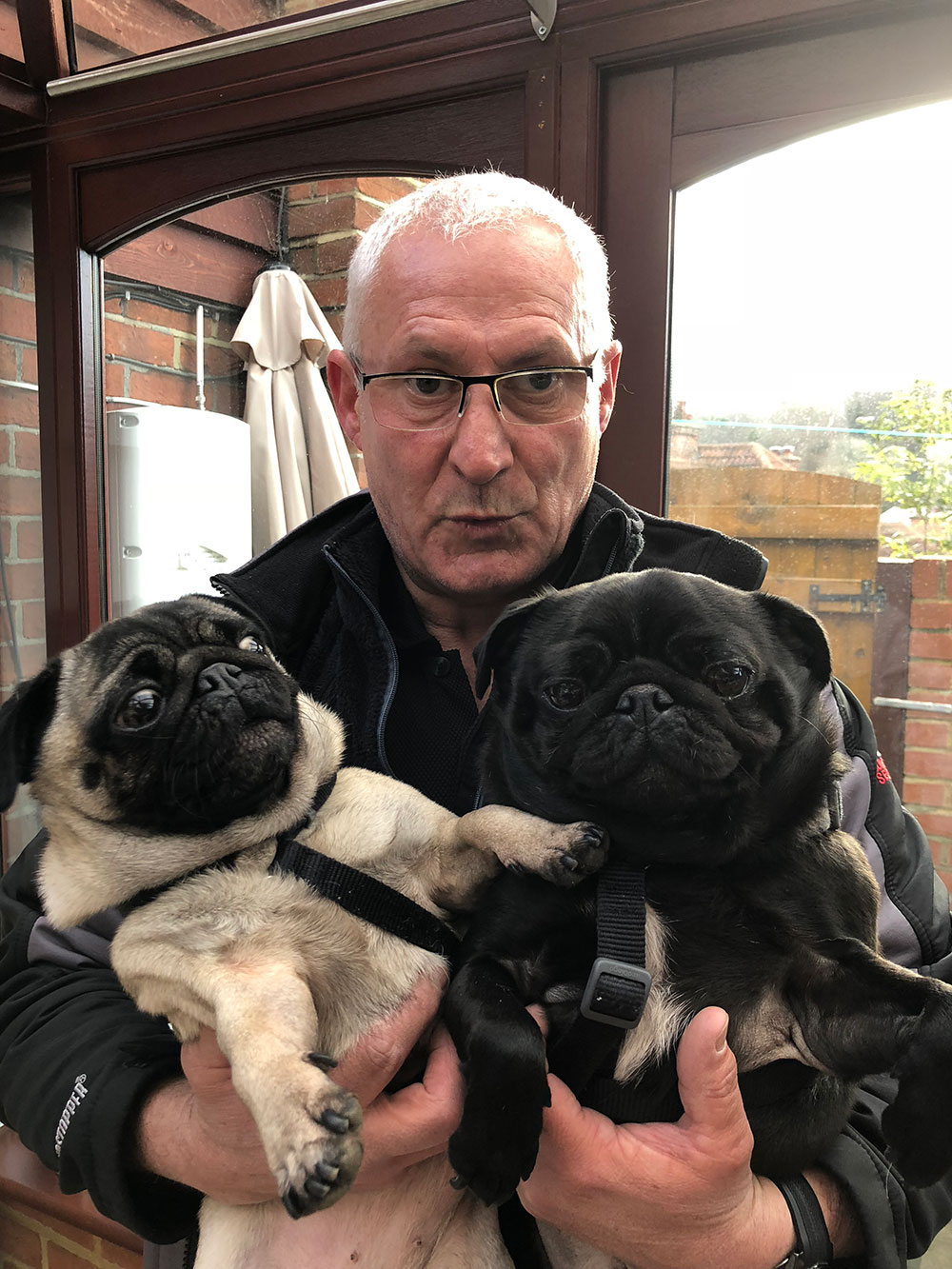 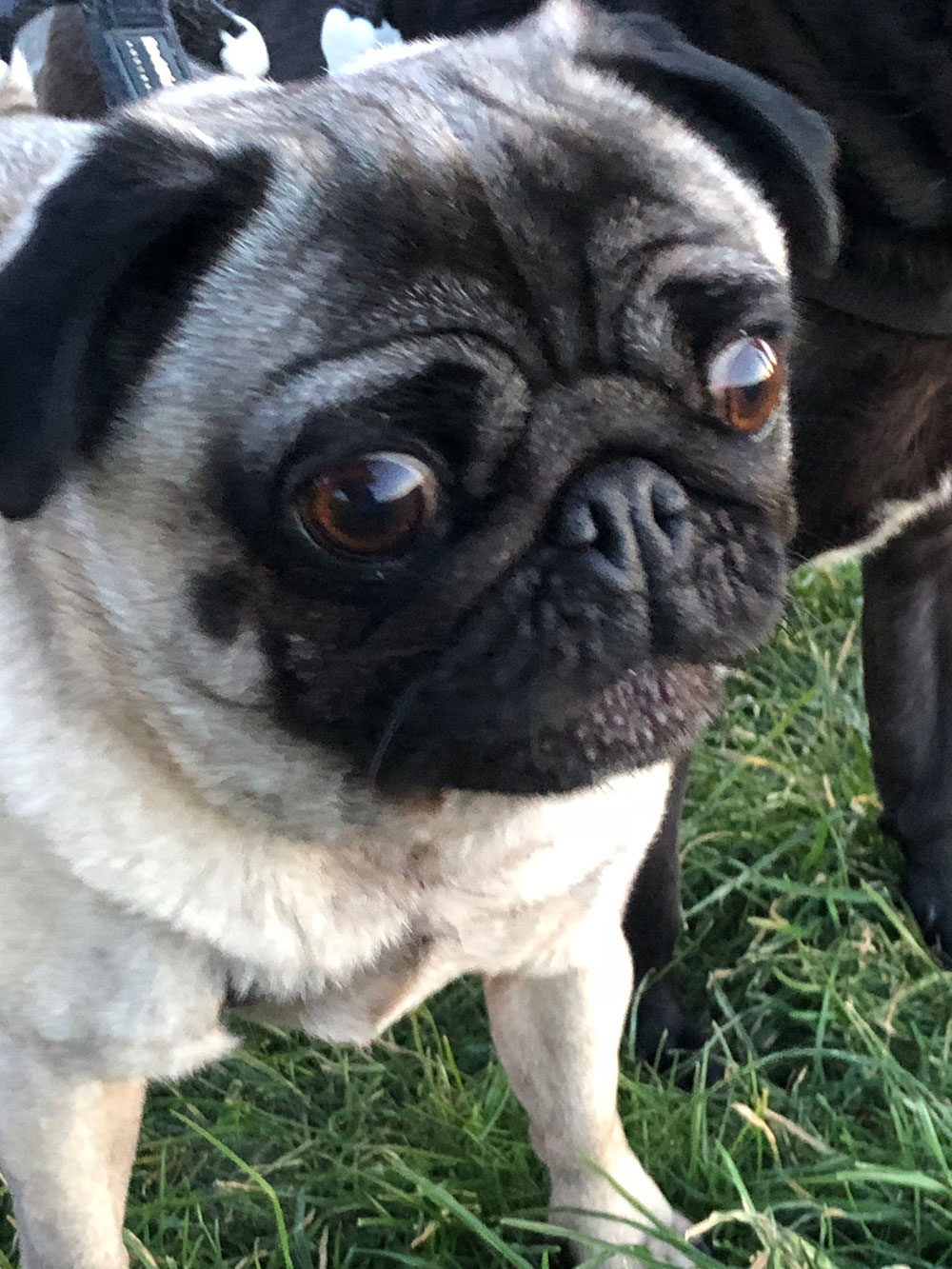 A winsome look from Millie 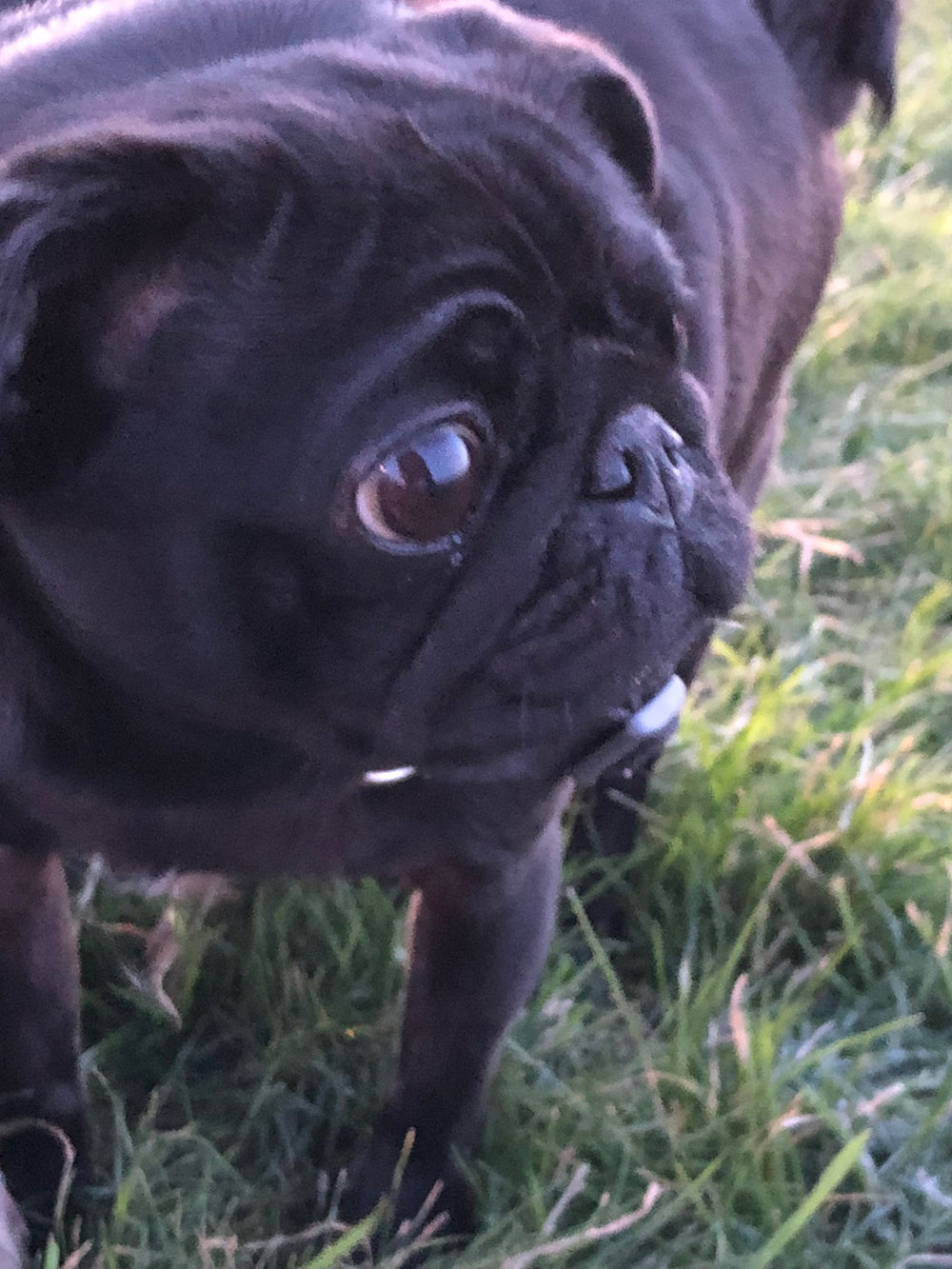 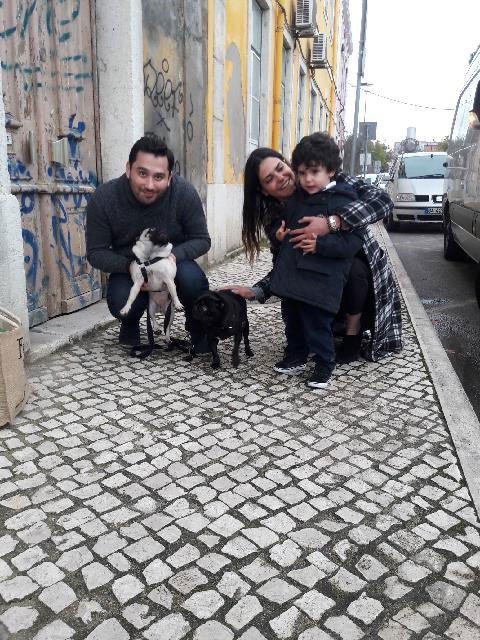 Happy reunions for Millie and Spike in the Portuguese capital

Jack Russell Daisy also homeboarded briefly with courier J, and was the perfect house guest. She hails from Essex and her new home is near Estepona in Spain. 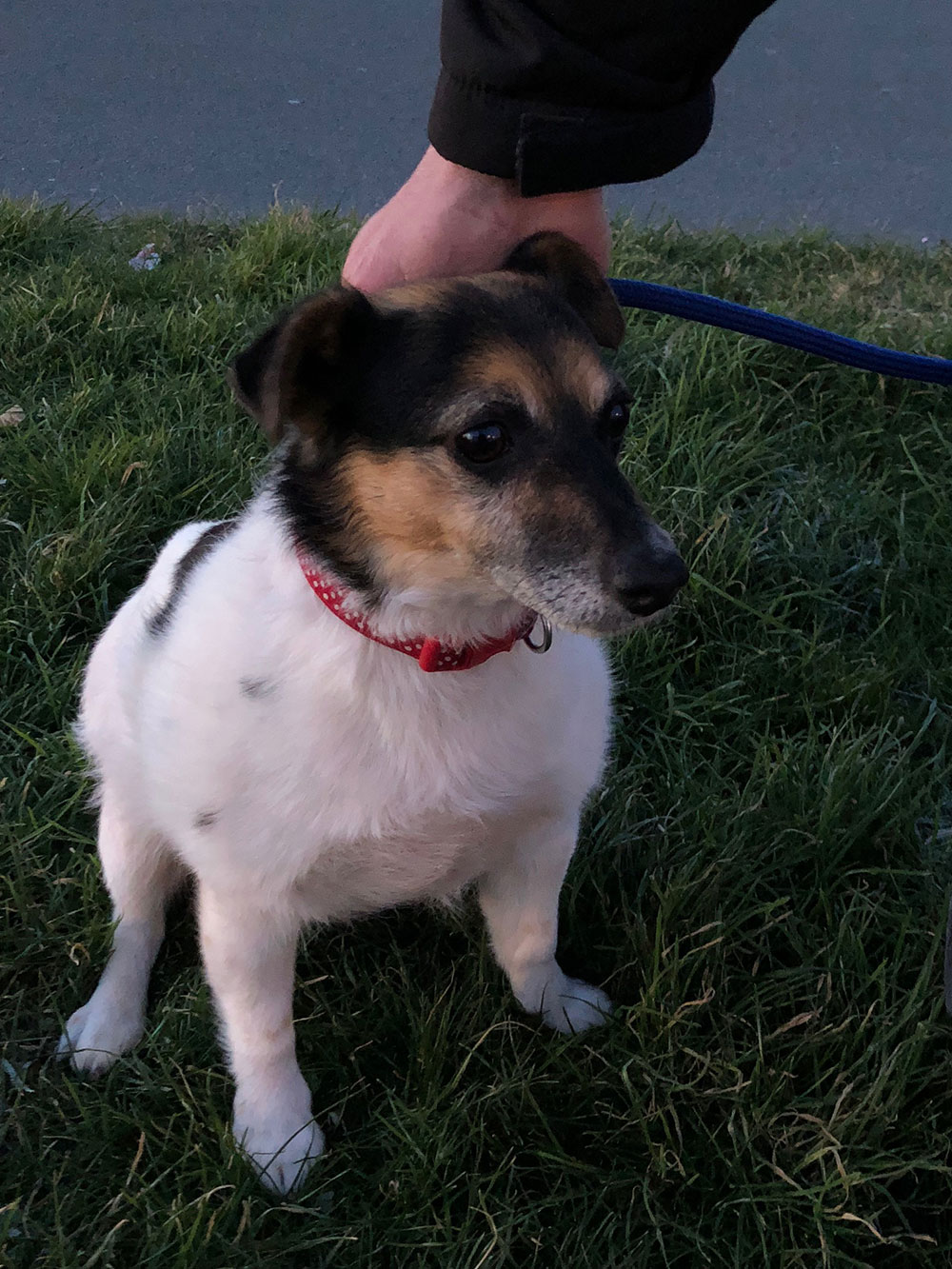 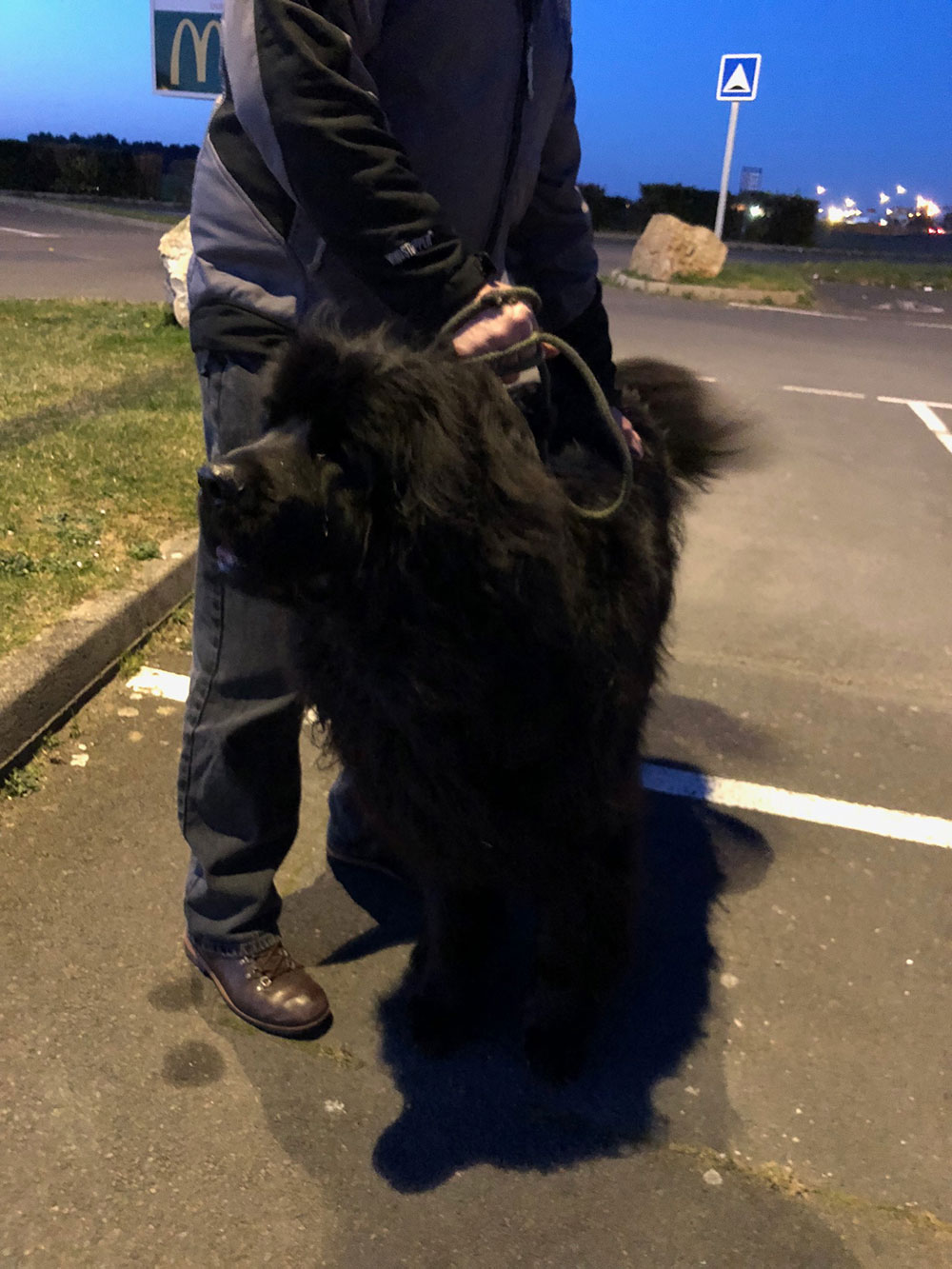 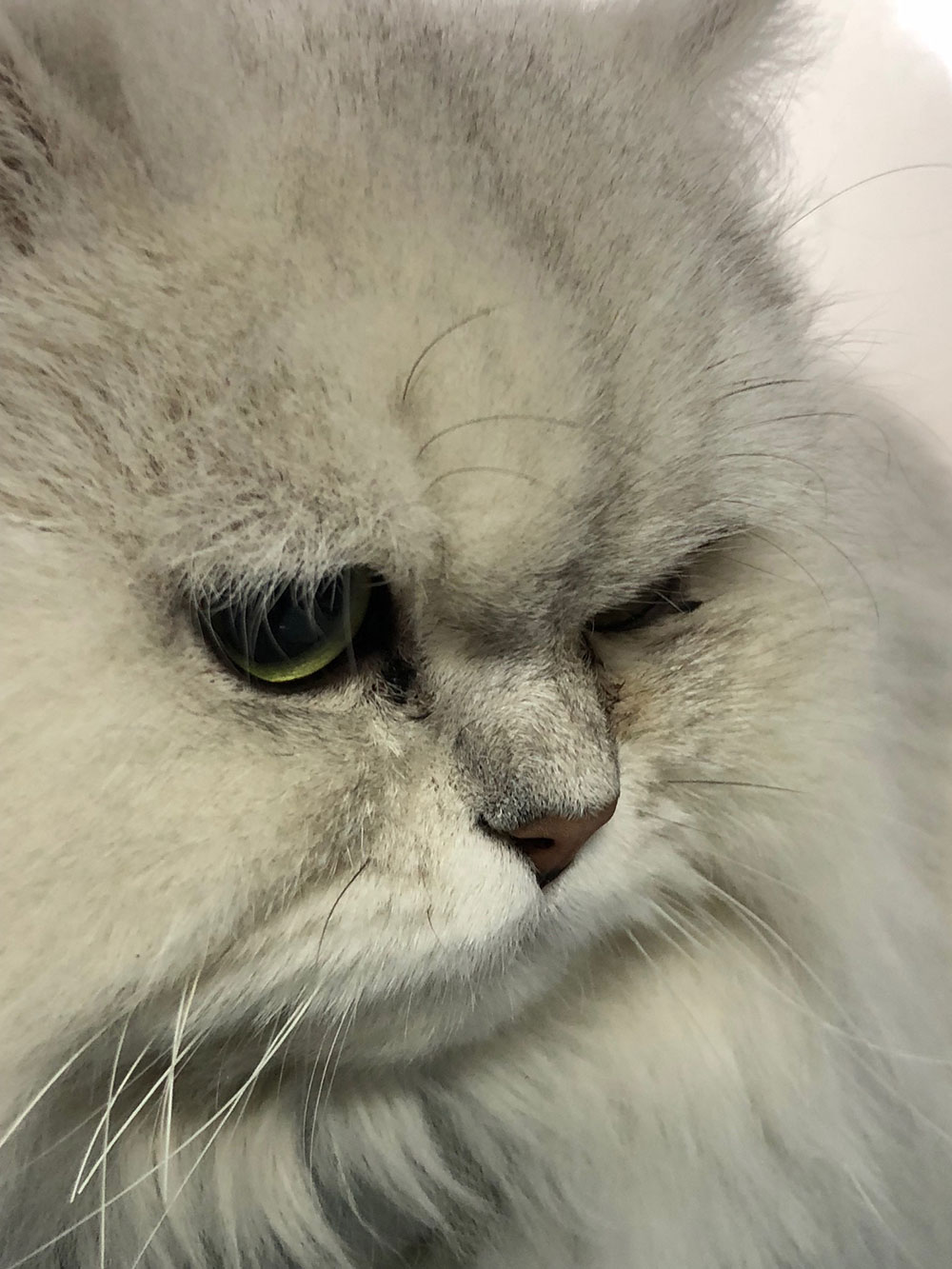 Lovely Staffie Levi started her journey in Lochore in Scotland, and is travelling all the way to Benalmadena in Spain. Her owners were really anxious about her travelling, but they needn’t have worried — she’s taken the whole experience in her stride! 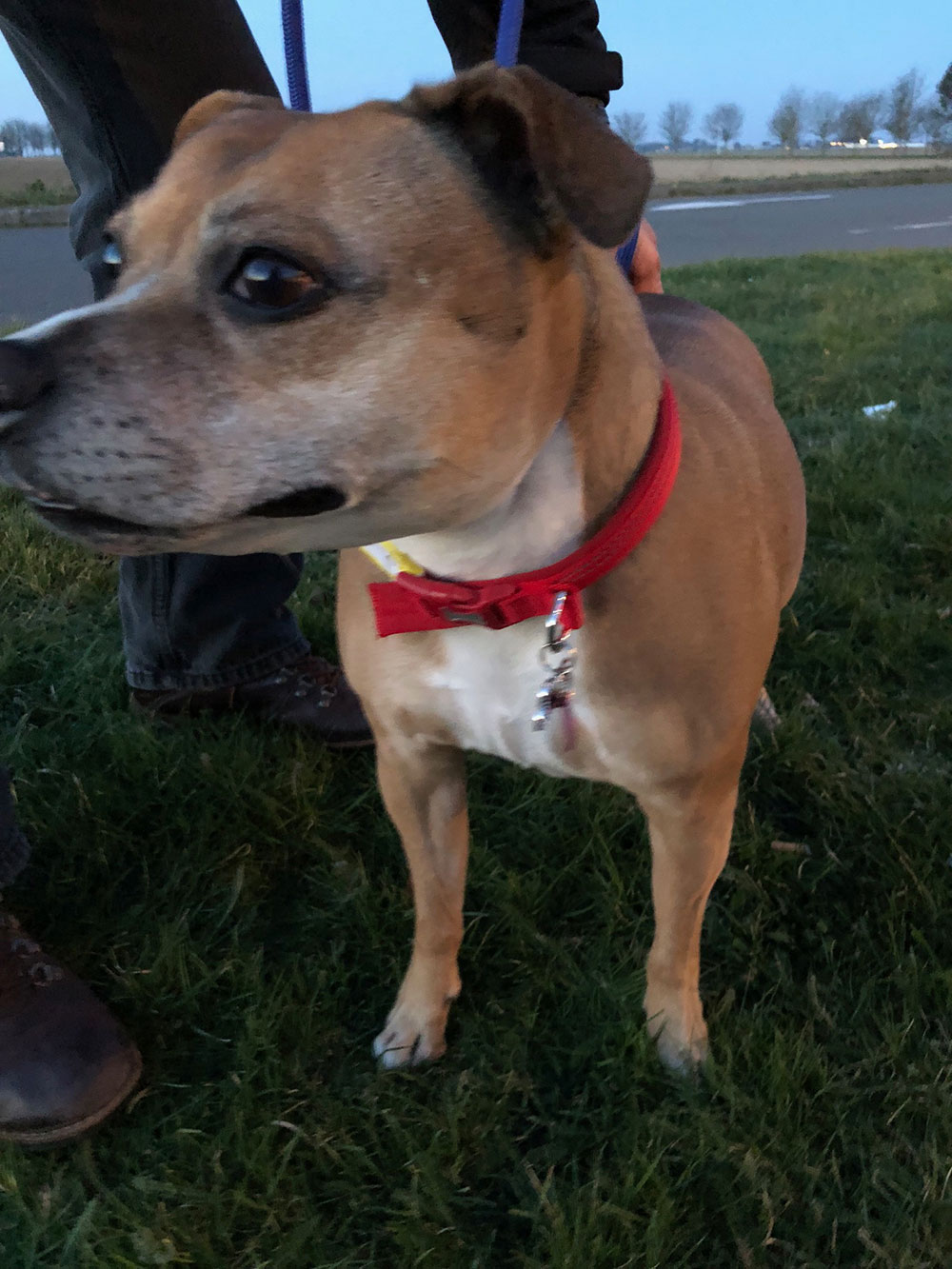 Fancy rats Mel and Koko travelled with us from Bristol to Montgat, near Barcelona. 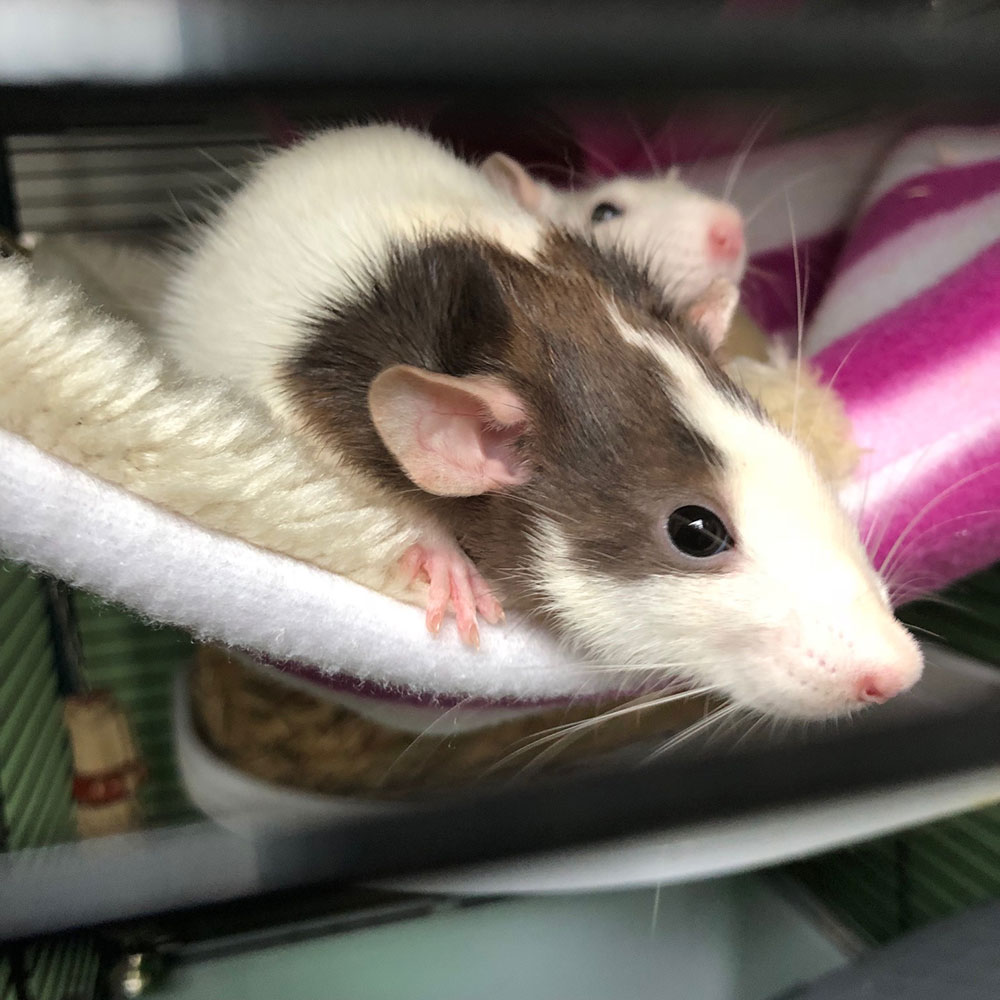 Mel and Koko waking from a deep sleep — what cute faces! 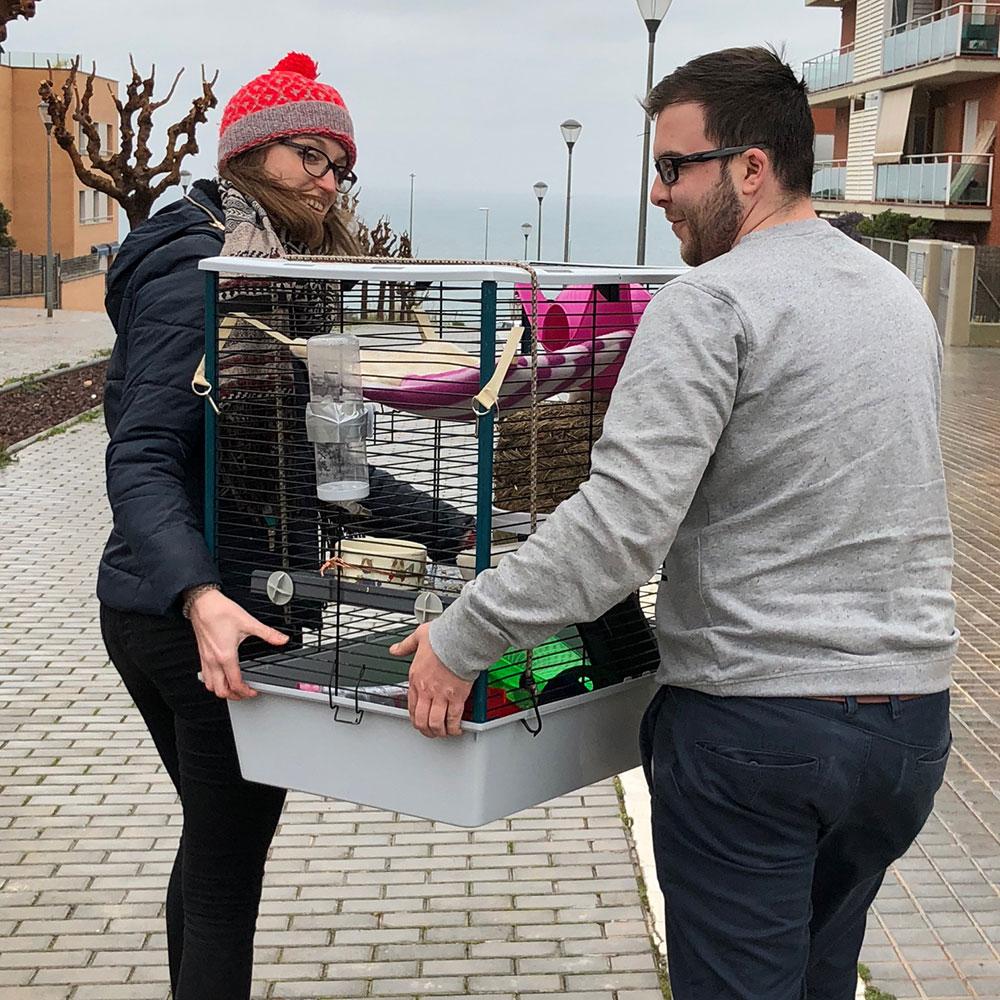 Beatriz taking delivery of the rats with a little help from courier Matthew — who should have put his coat on — it was uncharacteristically cold and wet for Catalonia!

A pair of very good-natured cats, Elvis and Ada stayed with courier J for a few days before the trip, which allowed her to discover their lovely personalities. They’re relocating with owners Paul and Sally from West Sussex to Alicante. 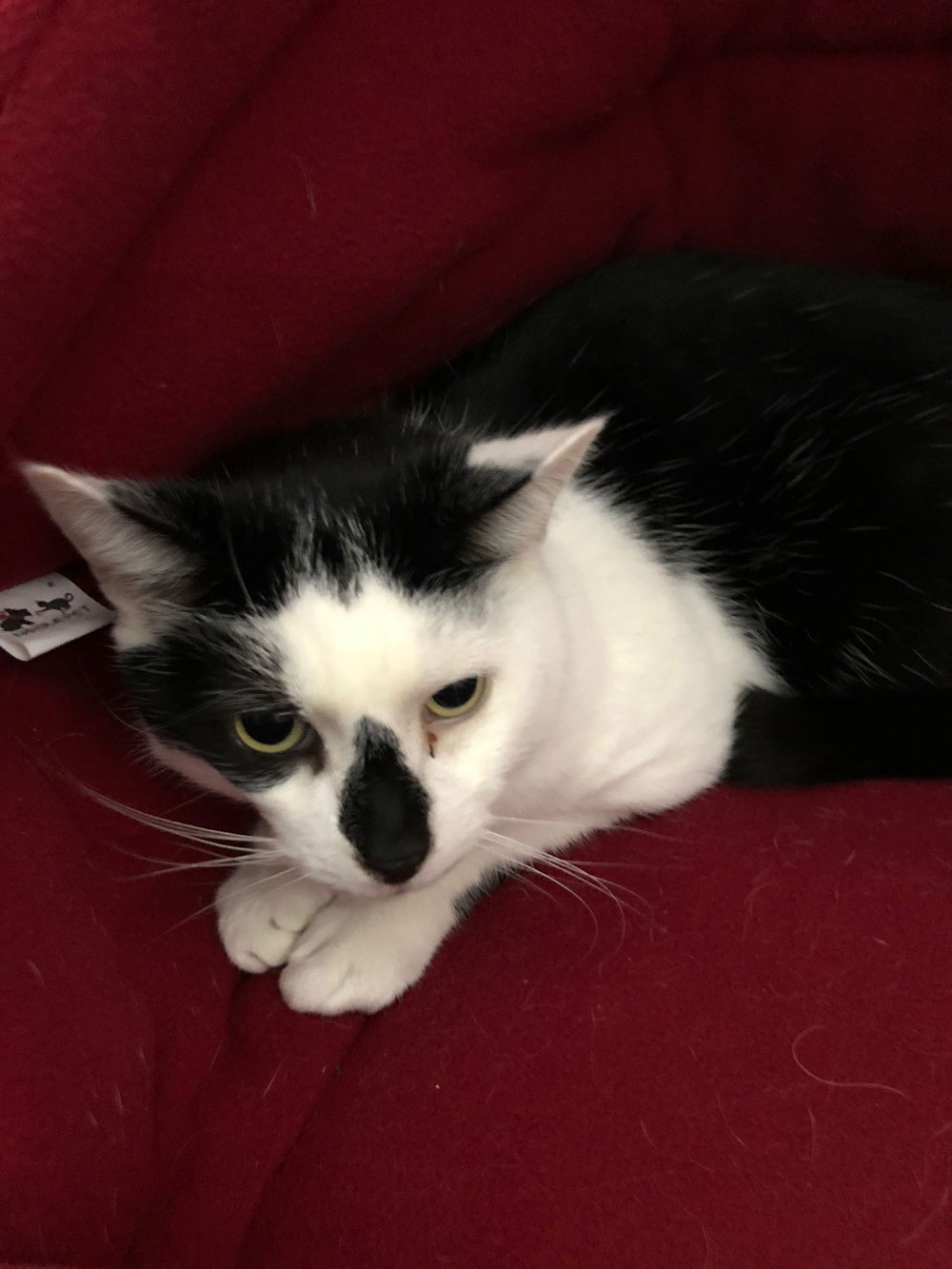 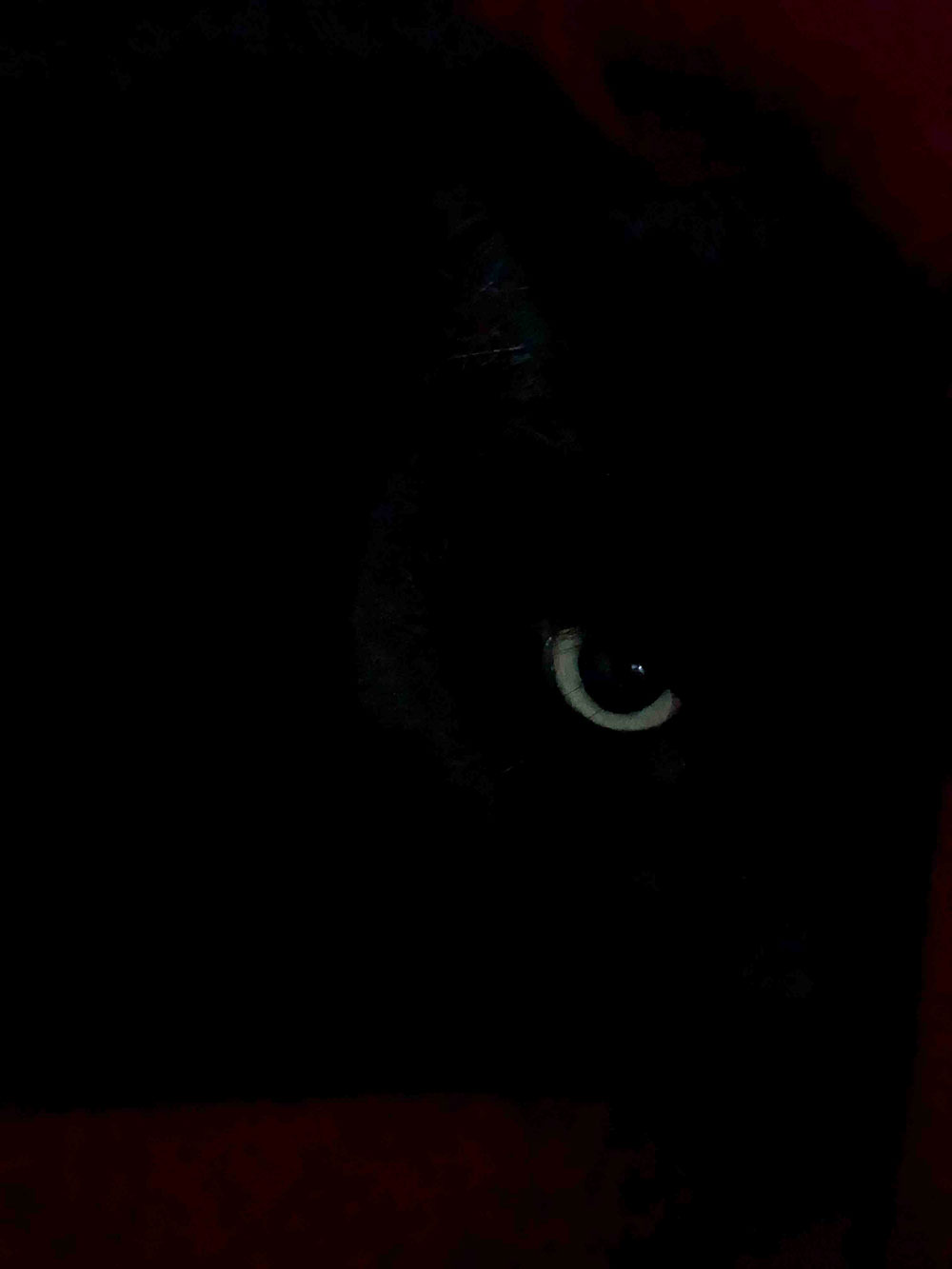 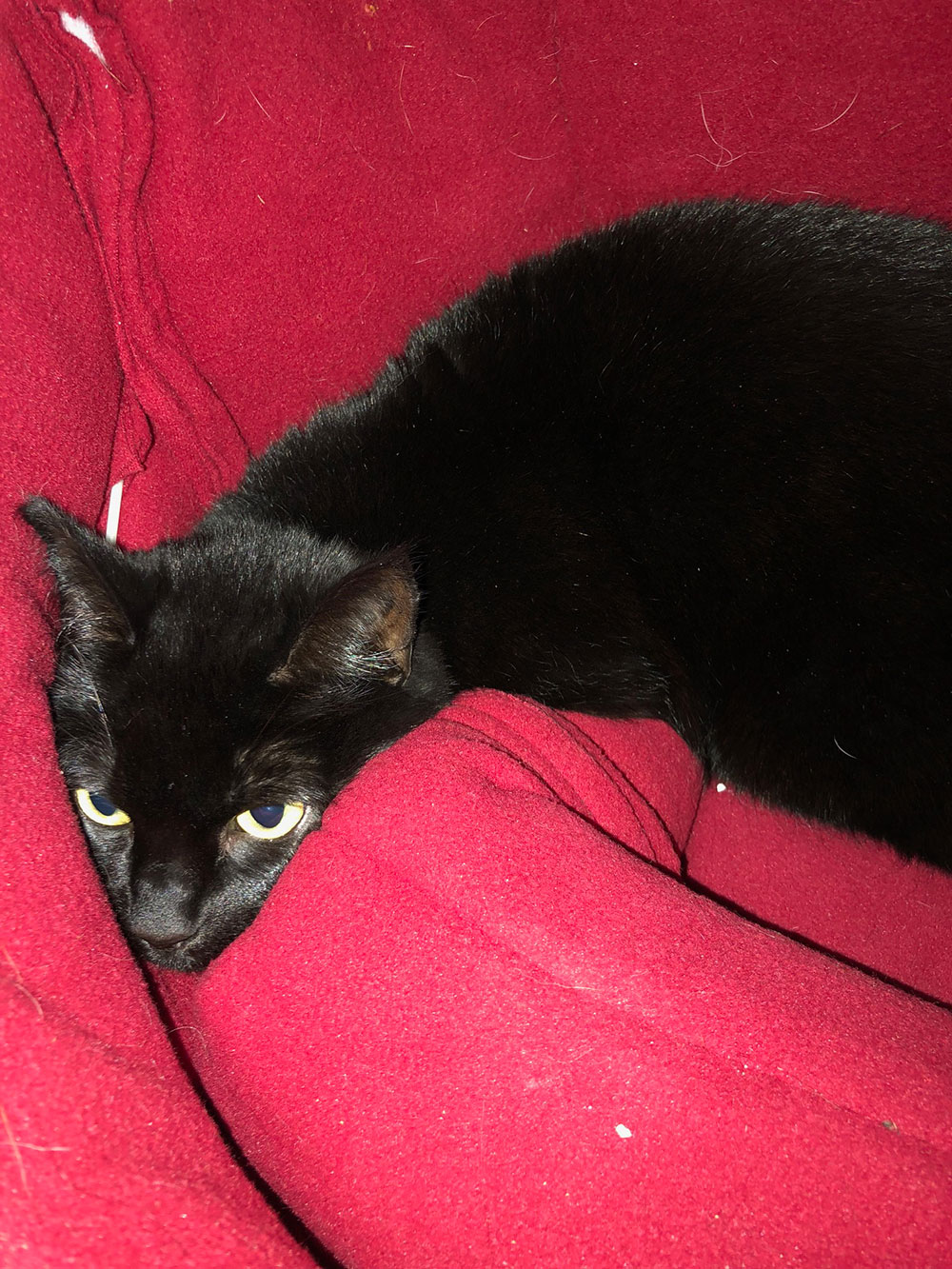 The gorgeous girl herself, Ada 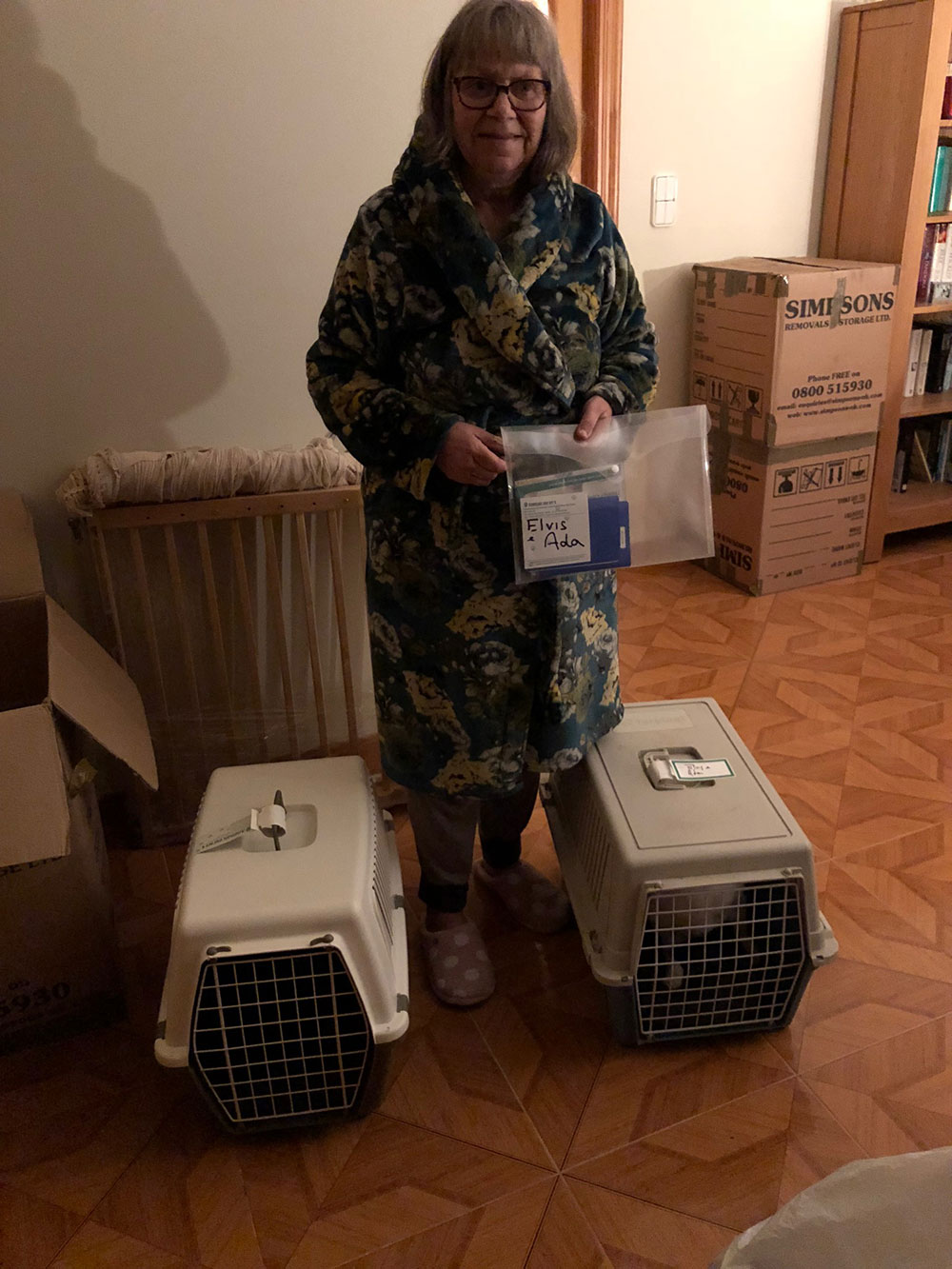 Reunion with Sally in Orba — looks like there’s plenty of unpacking to do!

German Spitz Sam and Shih Tzu/Poodle cross Teddy are moving with owners Mary and Colin from Kent to Alicante. A very charming pair of dogs who are clearly devoted to each other. 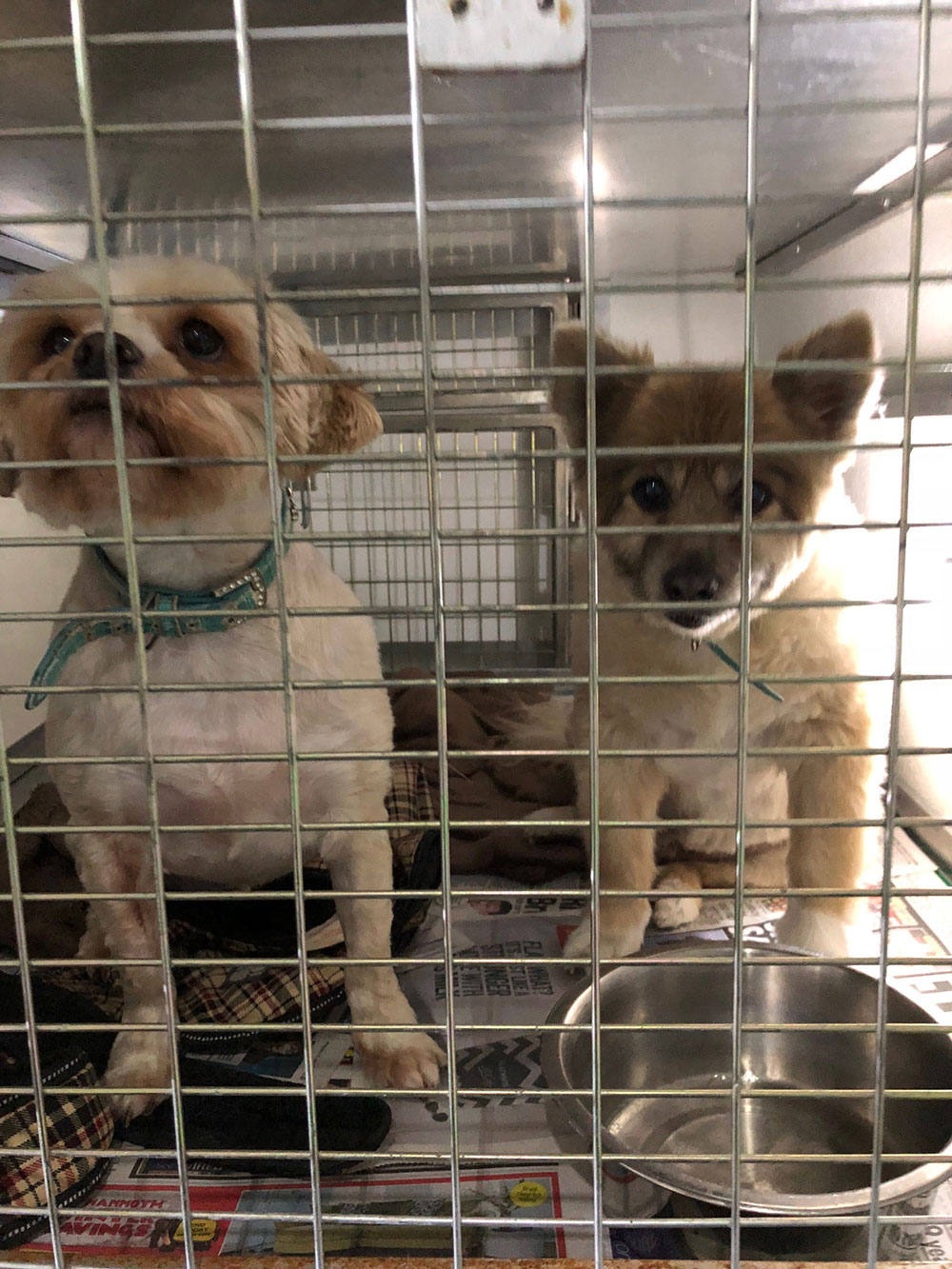 Teddy and Sam sharing a bedroom in our van 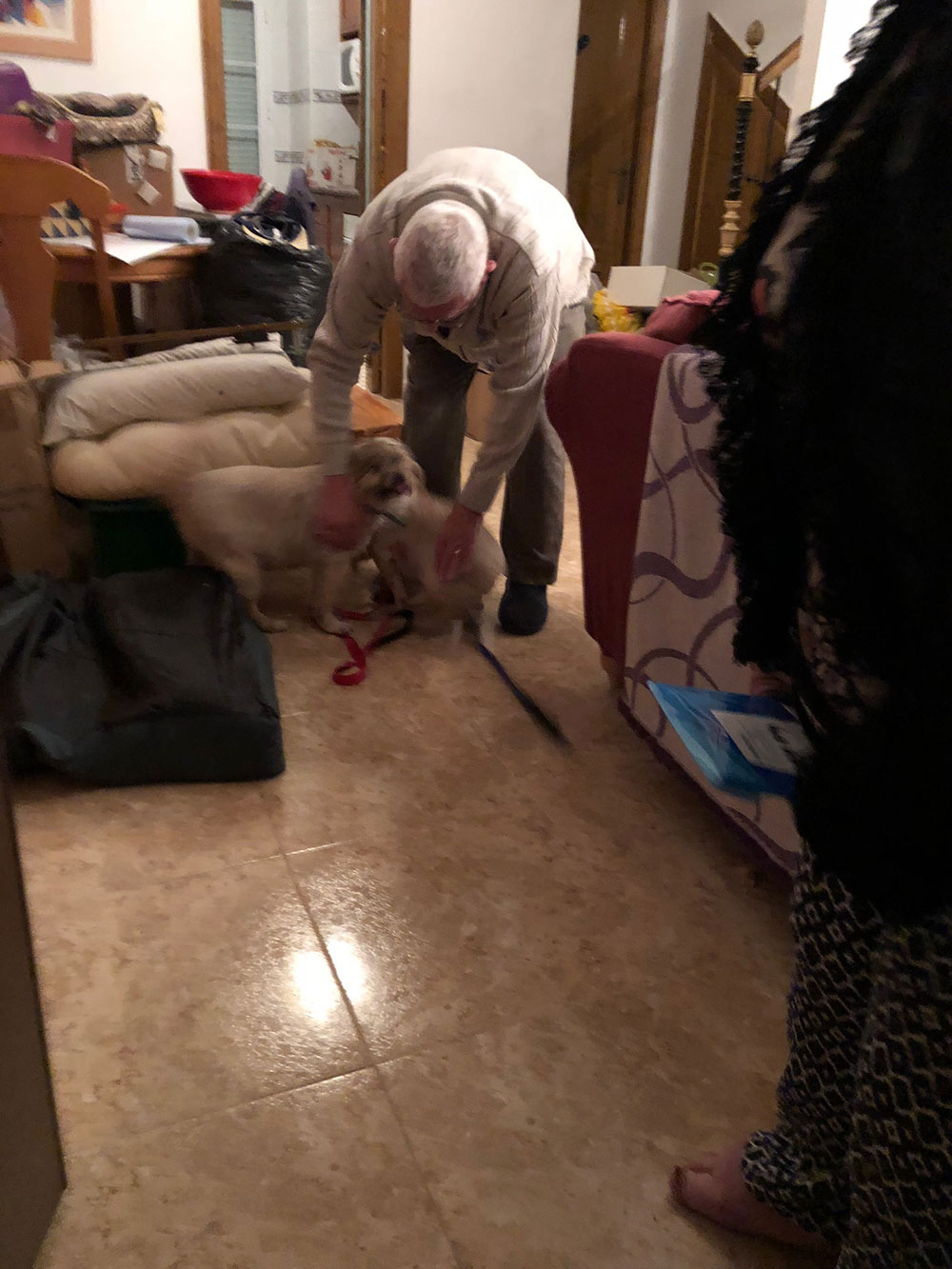 Excited — and therefore blurry — reunions for Teddy and Sam in Orihuela

Two sorts of Jack Russell — Lulu is a Parson’s while Myrtle is a mini. They belong to Jenny and her daughter who’ve moved from Essex to Torrevieja. They homeboarded with courier J ahead of the trip, who reports that Lulu, in particular, is quite a character, who made it her business to claim every dog toy in the house. Courier J had to intervene from time to time to ensure fairness and justice among the canine crew. 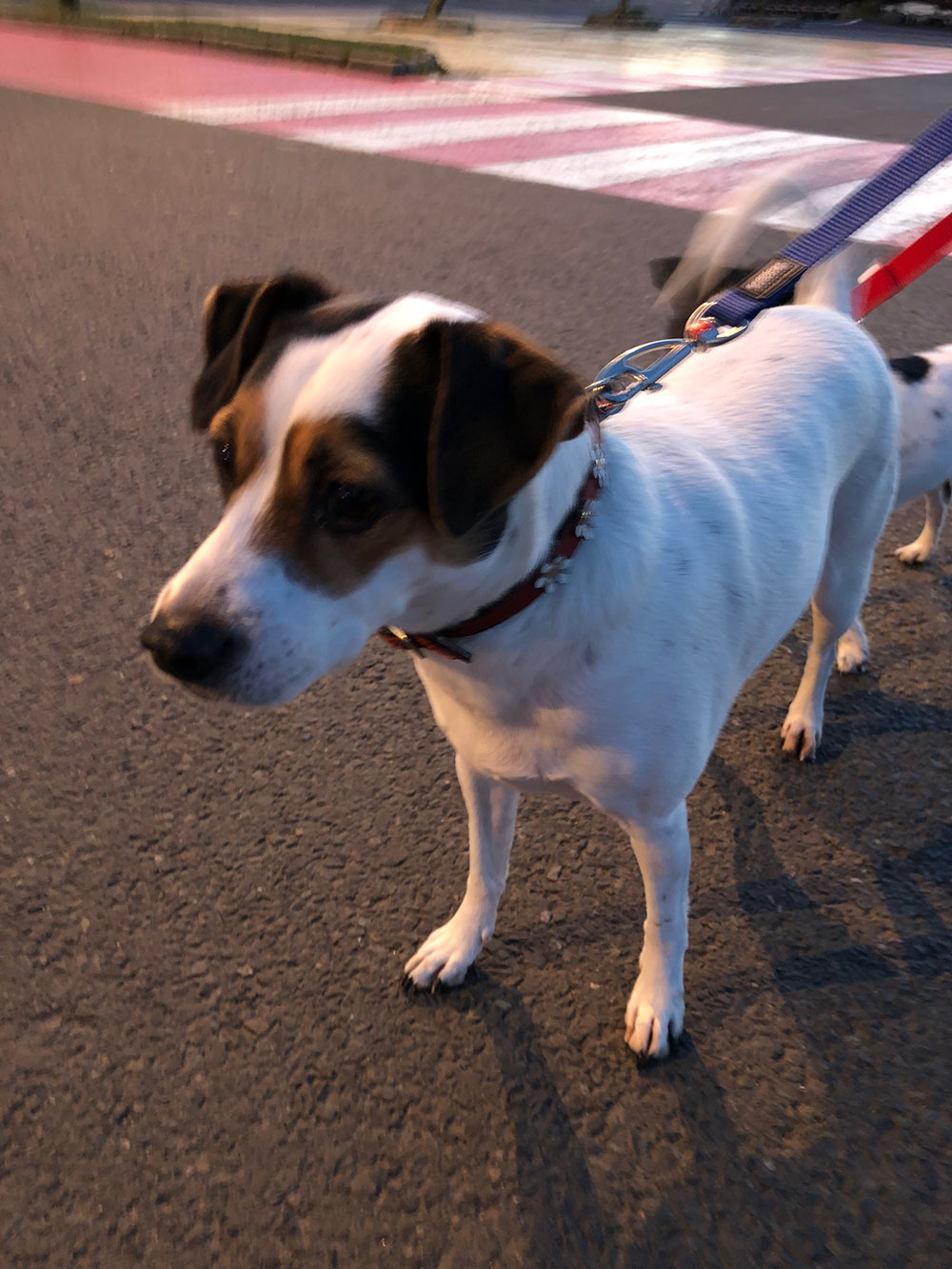 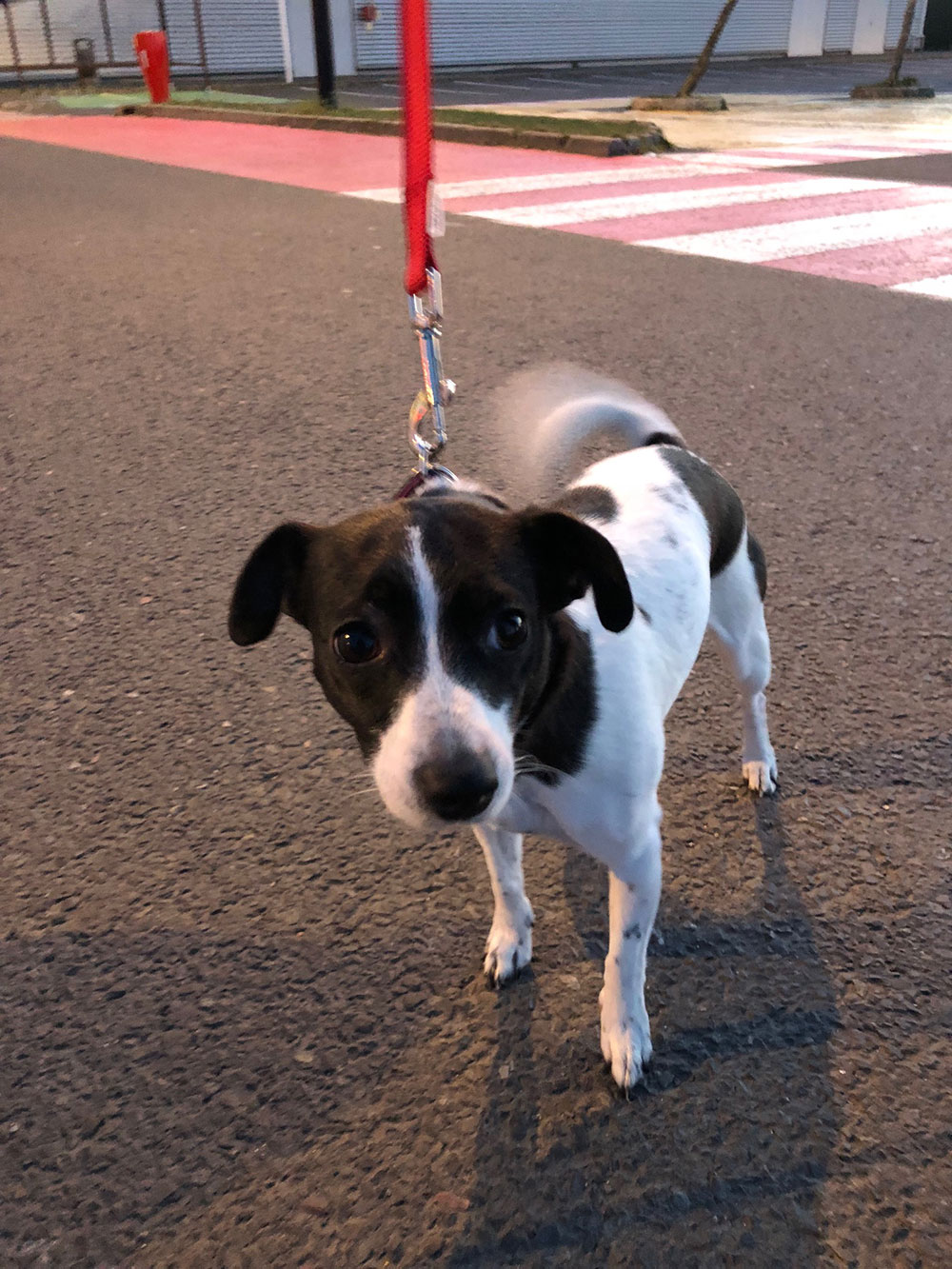 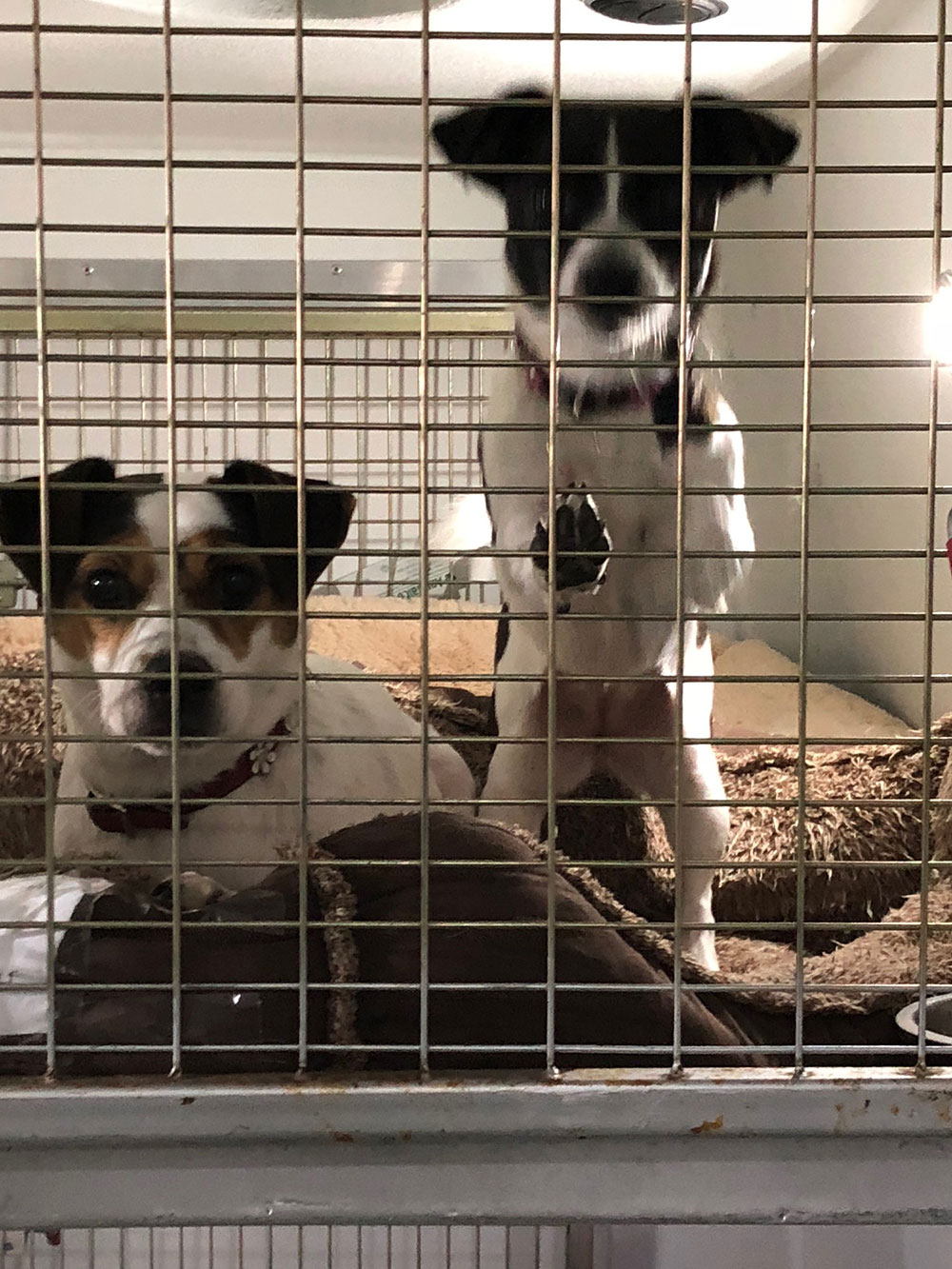 Lulu and Myrtle in their travelling bedroom 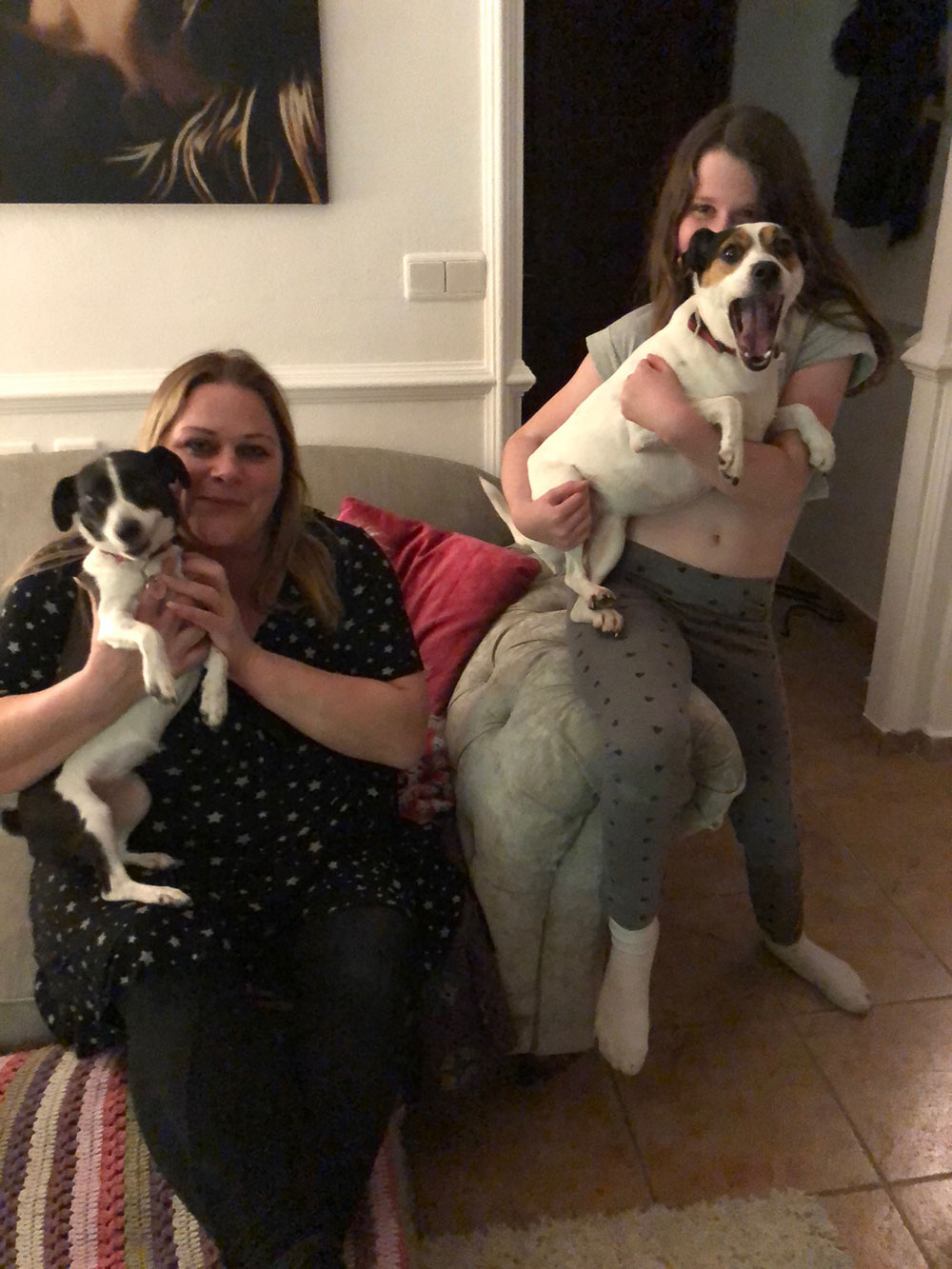 Gentle Bearded Collie Fred travelled with us from Devon to rejoin owner Richard in Murcia. 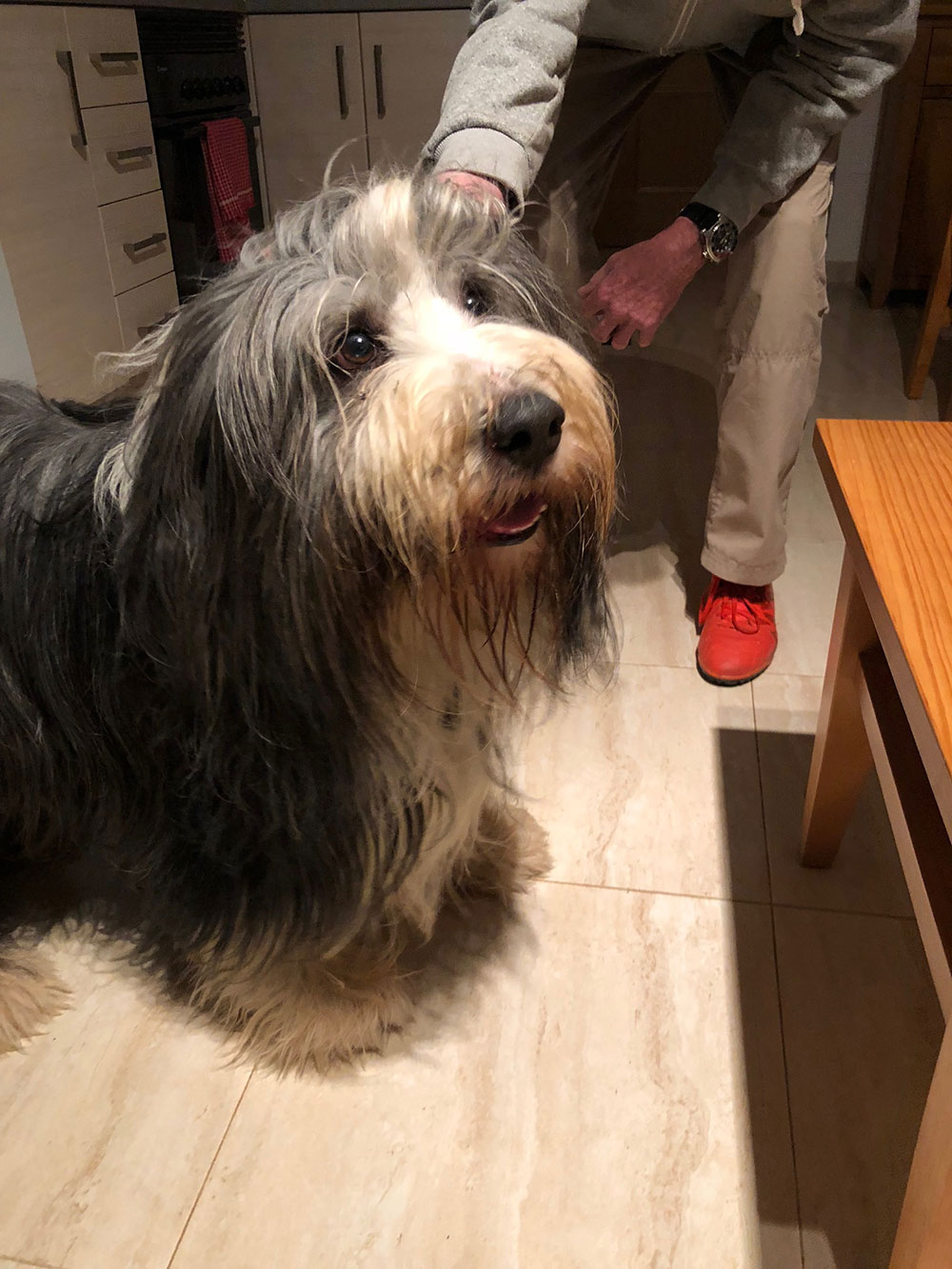 Fred was so pleased to see Richard again when they were reunited in Carmoli. 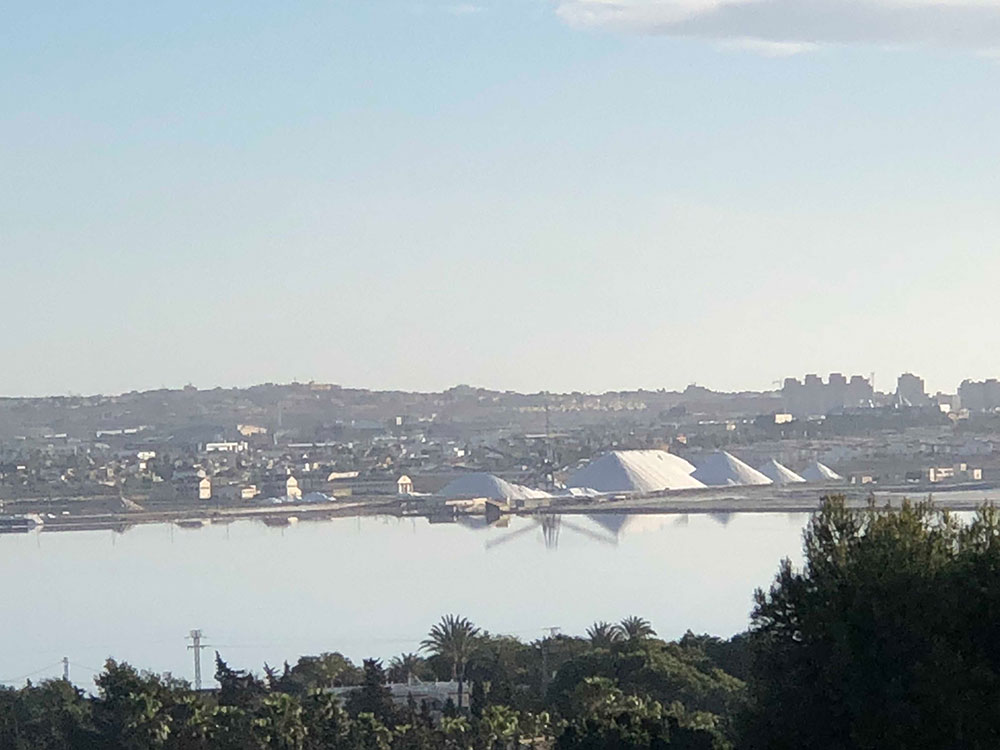 View over the salt lake at Torrevieja — you see the salt heaps in the distance. We make the most of the opportunity to enjoy some slightly milder weather before heading north again.