As part of our contingent of 30+ pets travelling to the UK, these four puppies and one older dog are flying from Greece. Accompanied by courier Becca, they took off from Athens airport and landed at Paris Charles de Gaulle, where Courier Valerie was waiting to take them the rest of the way via Eurotunnel.

These four puppies are 17 weeks old and growing fast. Left in a dustbin near Athens, they were lucky enough to be found before it was too late, and taken to the vet. With vaccinations and pet passports all sorted, they’re now on their way to a new life with Laura in London. 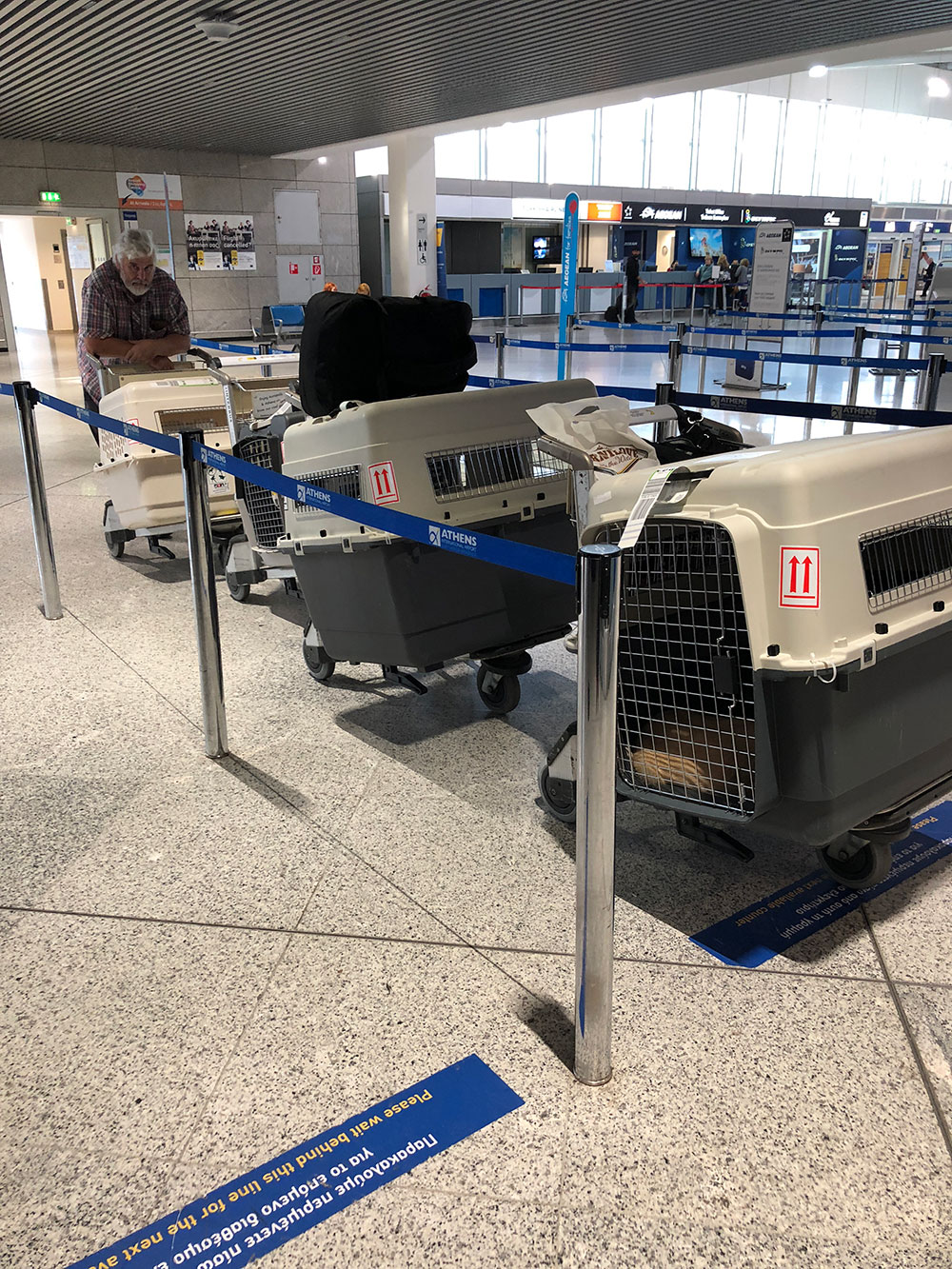 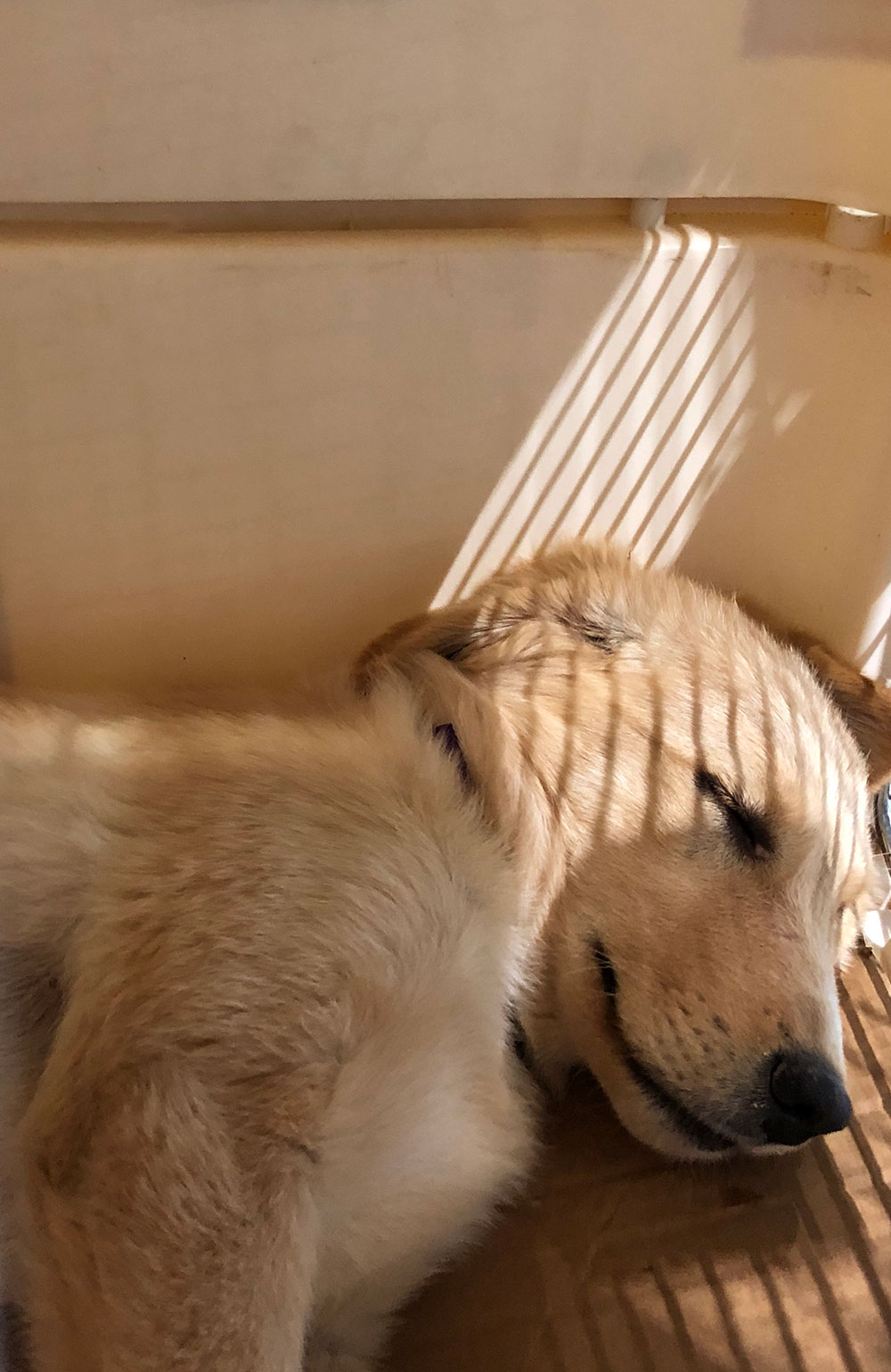 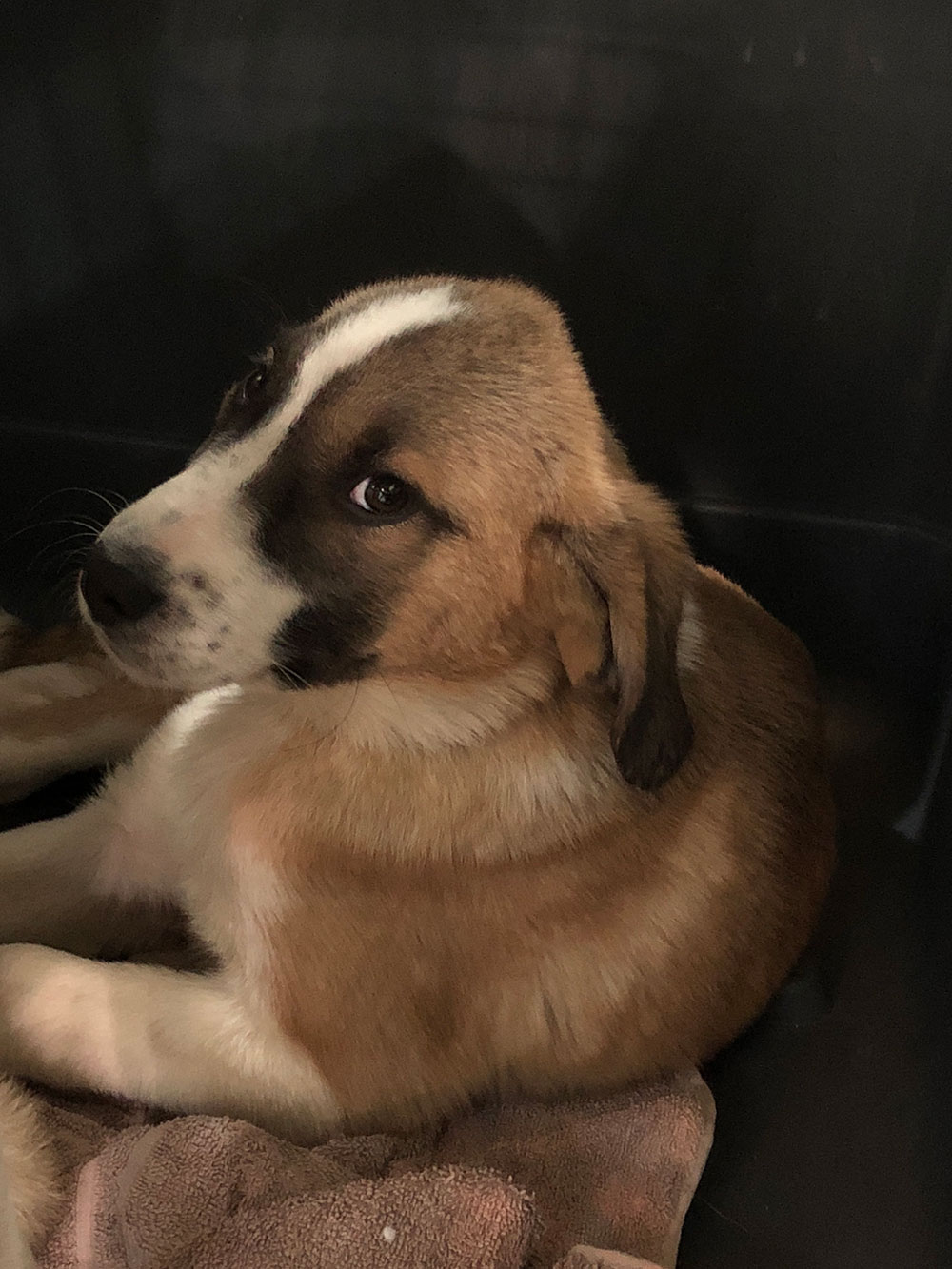 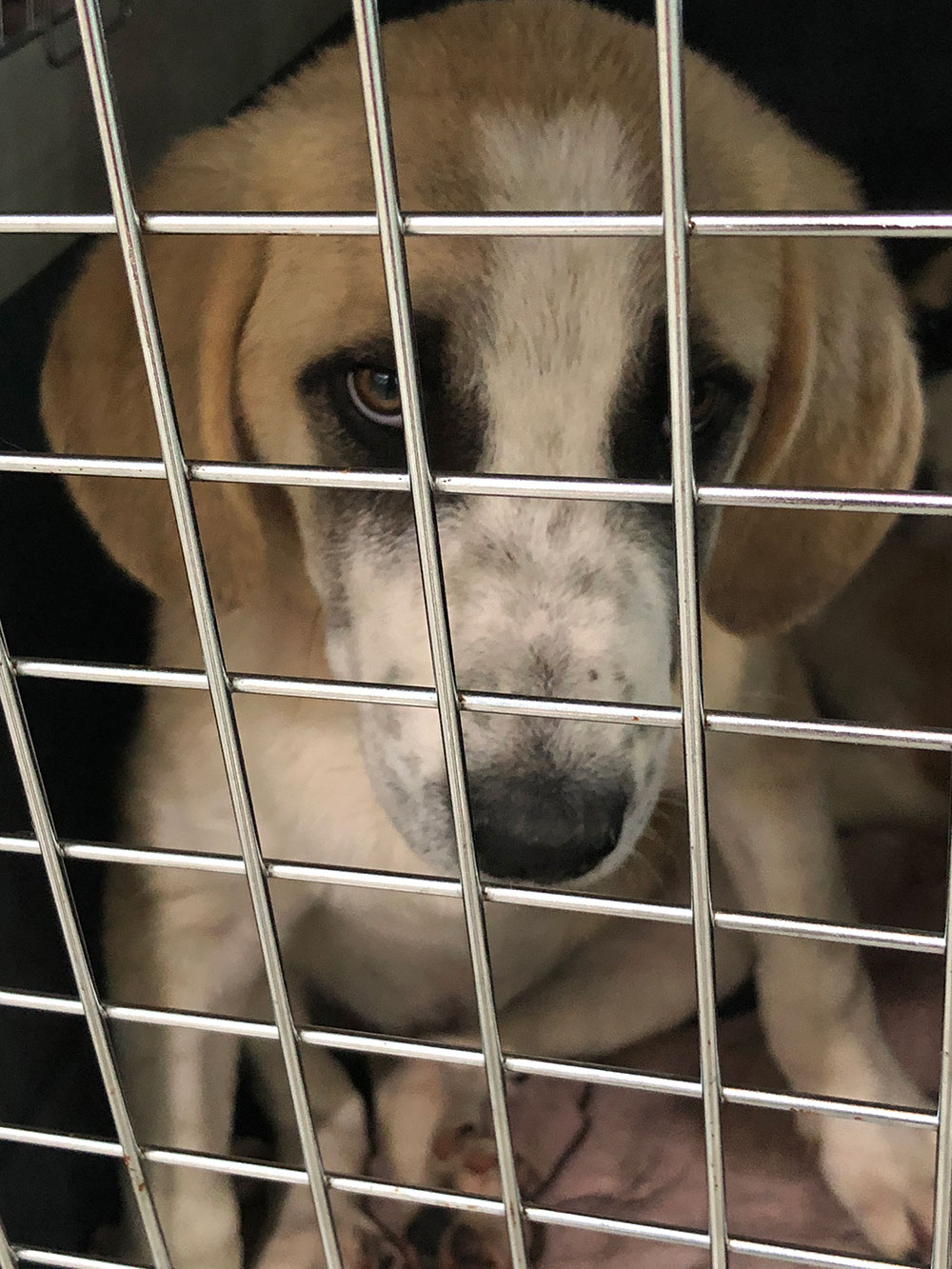 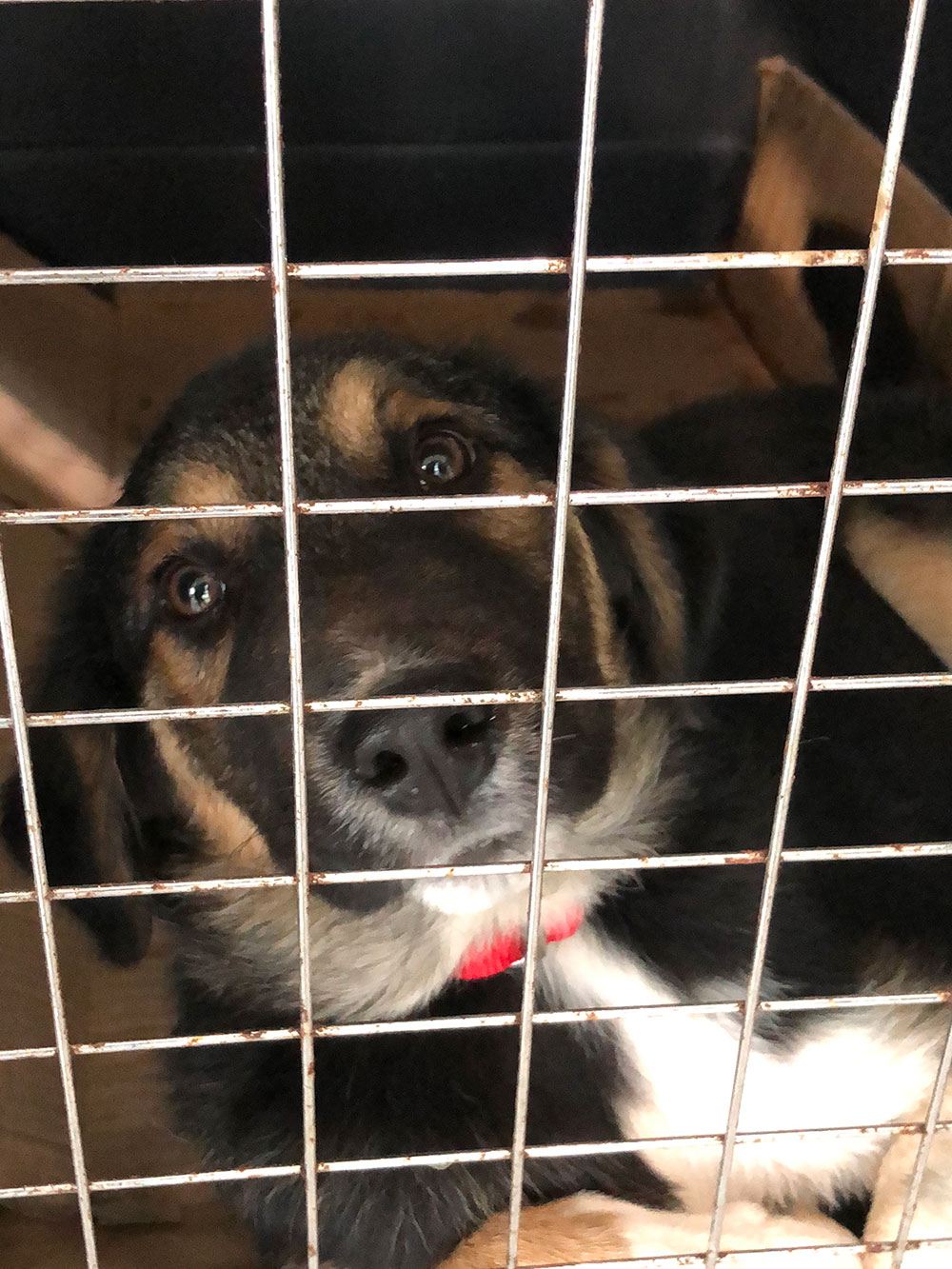 An alert expression on Bob’s face 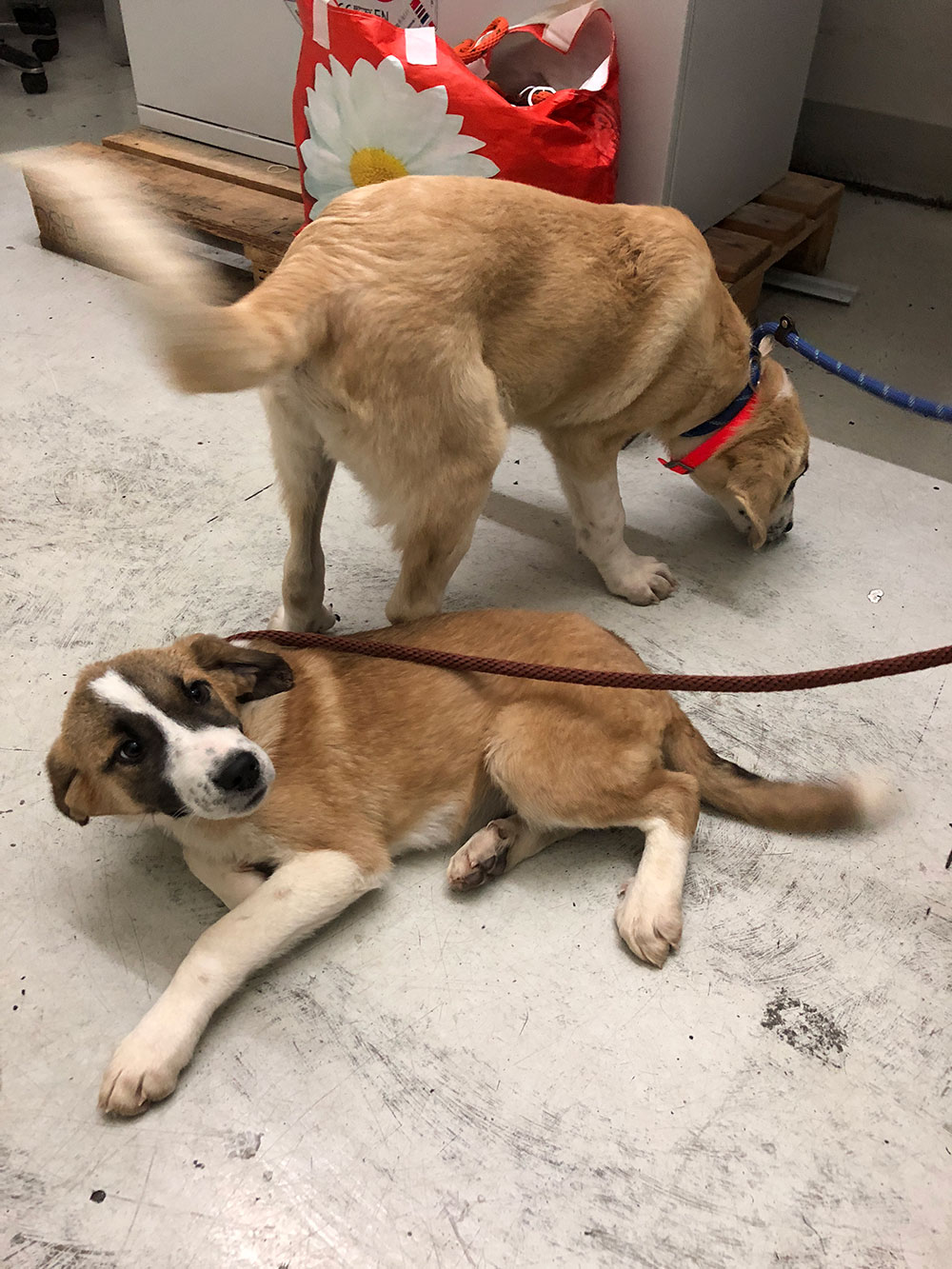 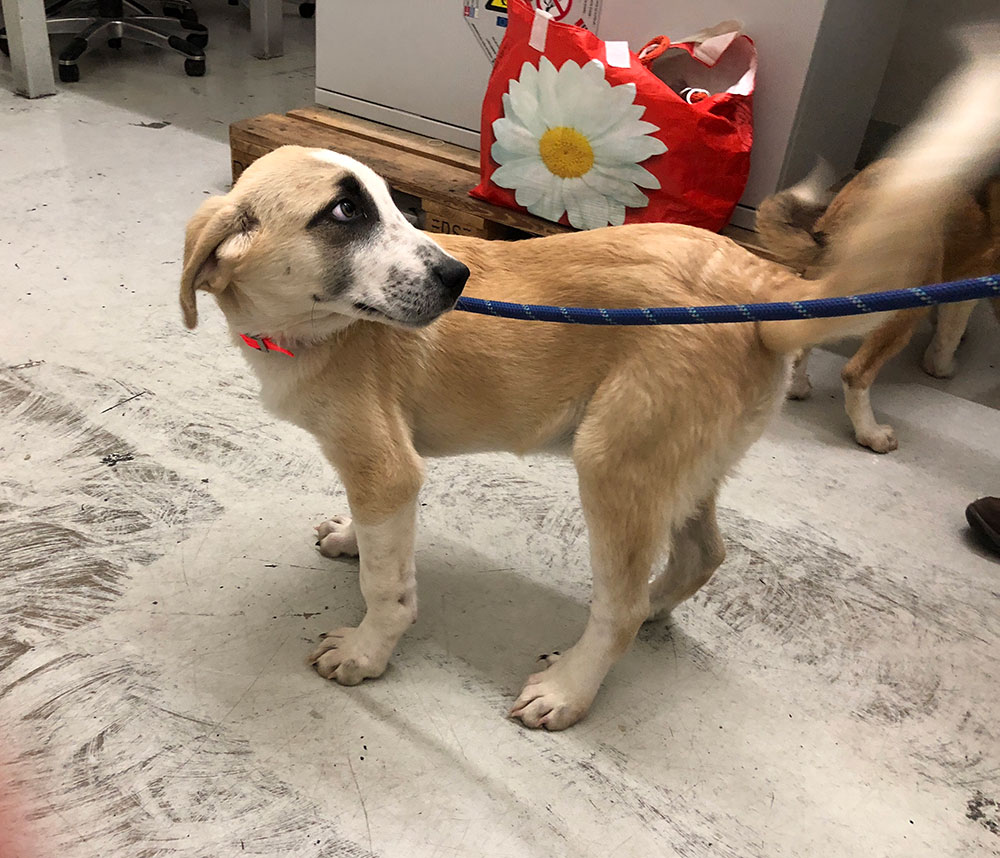 Smudge wagging his tail while he waits 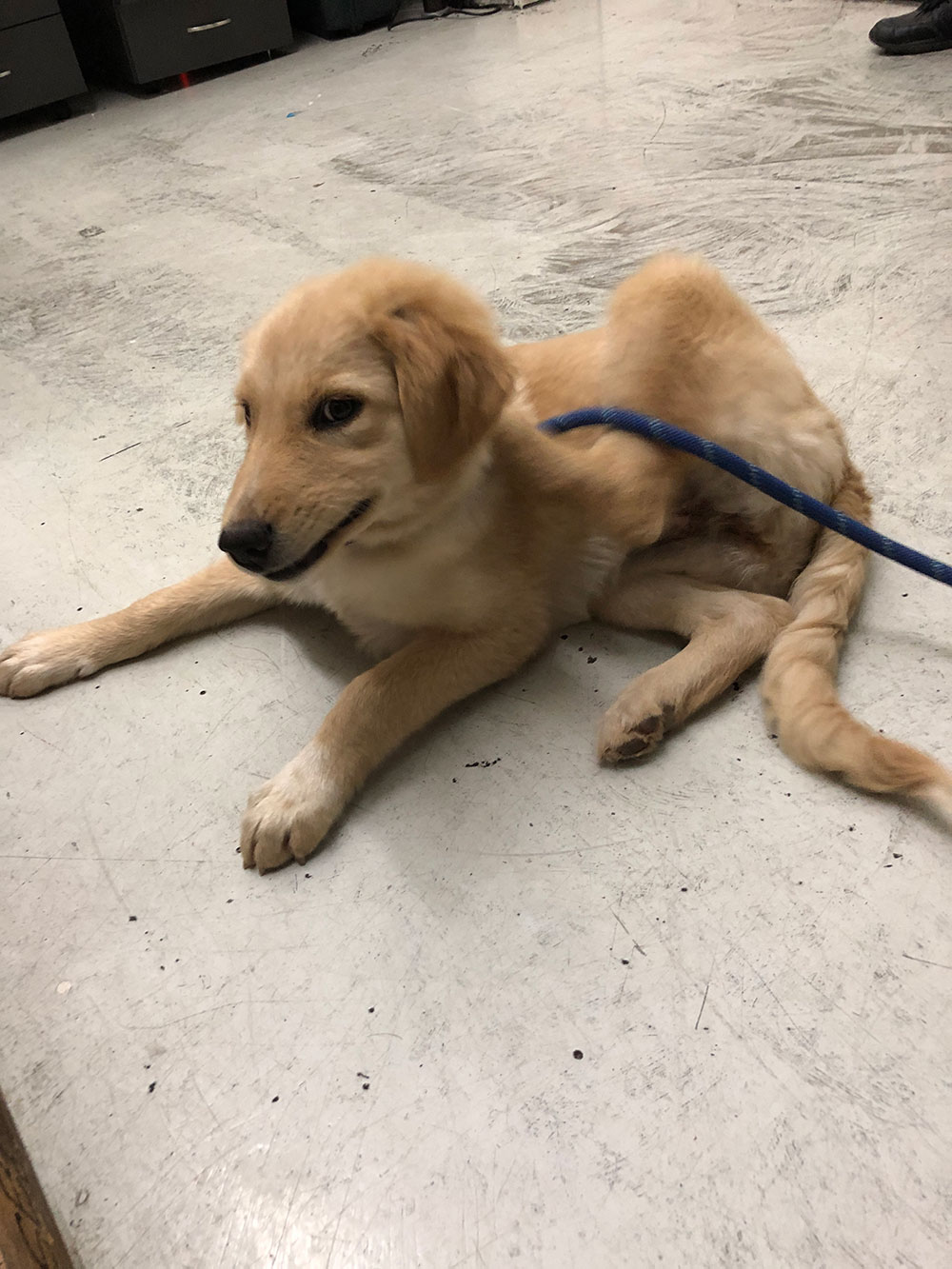 Winnie scratching an itch behind her ear 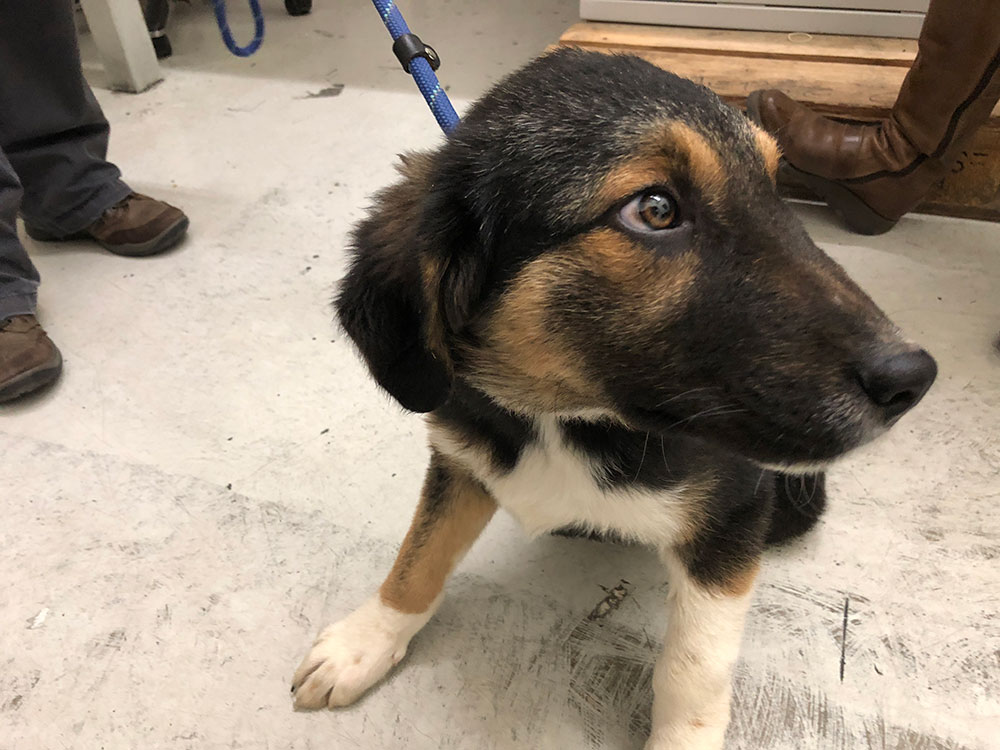 Bob keeping an eye on everything

Eric hails from Lesvos, where he was one of many dogs who had to make a new life on the streets when the disused military base, that had been their home, was closed down. Injured in an accident, Eric was fortunate to be found by Emily and Sophia, two nurses from London. Having overseen his veterinary treatment, they left him to recover in the care of Rebecca (of Lesvos Stray Dog and Cat Adoptions) while they set about finding him a home in the UK.

During check-in at Eurotunnel in Calais, it turned out that Eric had received the wrong parasite treatment, so he couldn’t immediately enter the UK. Our couriers oversaw his correct treatment and transfer to kennels for a brief stay. Couriers J and M will scoop him up on their way to Eurotunnel today with another group of dogs from Greece — more about that trip in a separate post.

Eric is still looking for his forever home; Emily and Sophia will watch over him in the meantime. 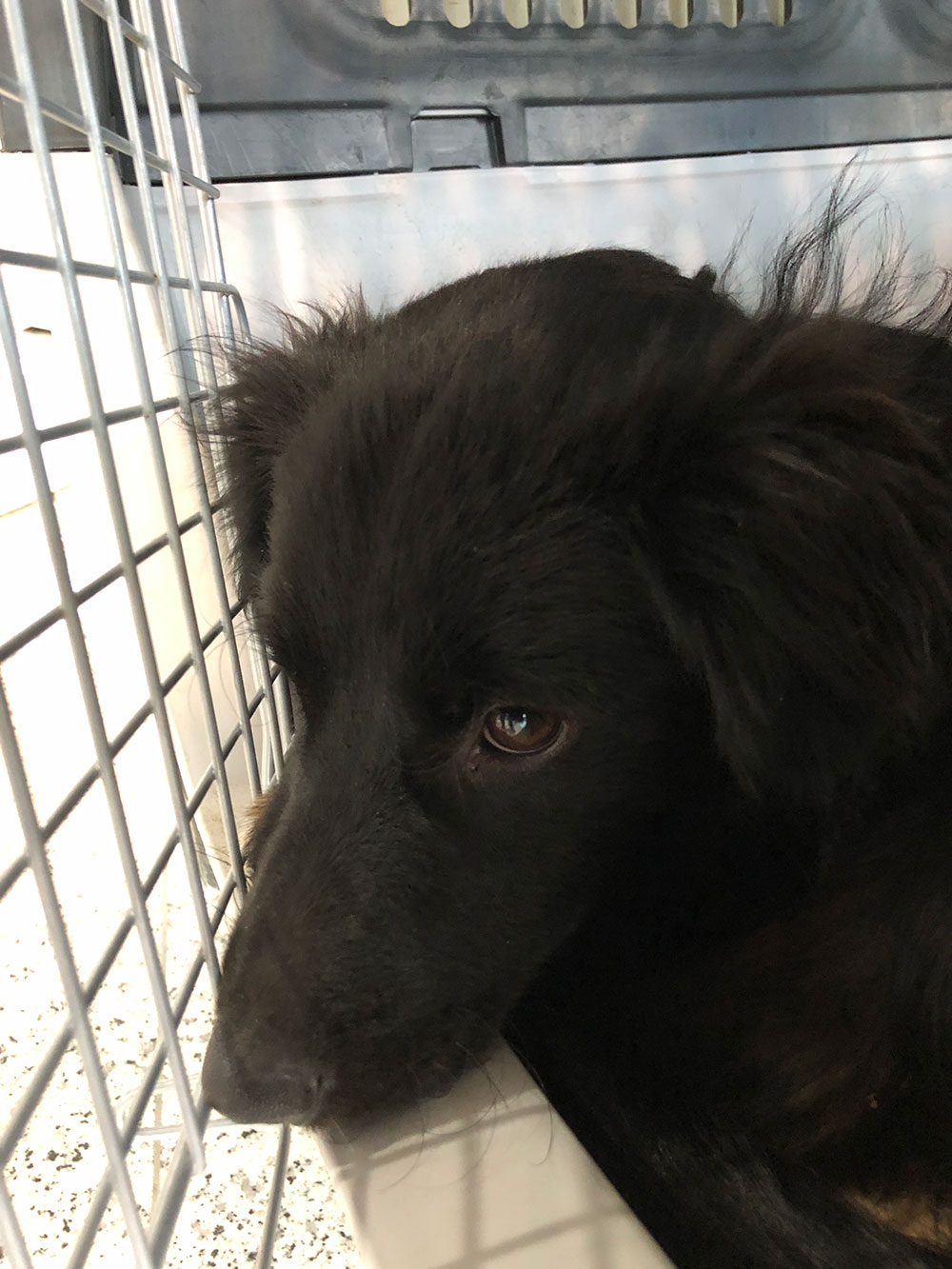 Handsome Eric in his travel box 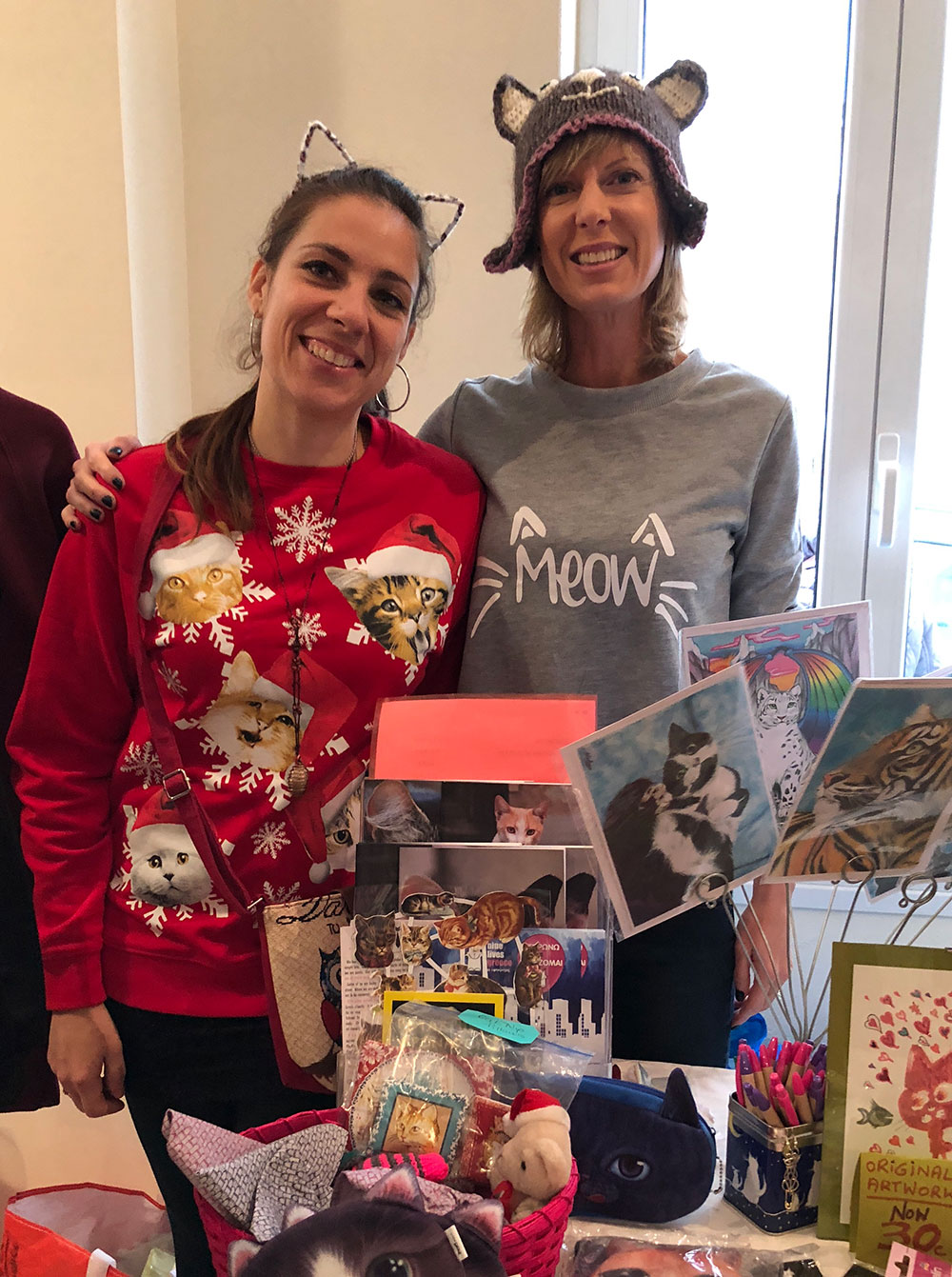 On our way back from seeing courier Becca and her charges off, there was time to join in the hustle and bustle of the Nine Lives Greece Christmas bazaar