Meeting a cat from Italy, and dogs and a rabbit from Greece

Having delivered all their passengers from the UK, couriers M and J collected Pipi the cat from Italy. They then headed to the Italian port of Bari, where courier J hopped on the ferry to Patras in Greece.

We transported Pipi to Fondi last year for her owner Jane. Now it’s time for Jane and her partner to return to the UK, and Pipi is once again travelling with Animalcouriers.

We had fun and games rounding up Pipi. We told Jane that Pipi was OK, but a bit annoyed with us, to which Jane said:

Haha 😂 she is feisty but really a good girl!! We call her the principessa 👸 as she is a bit of a princess! 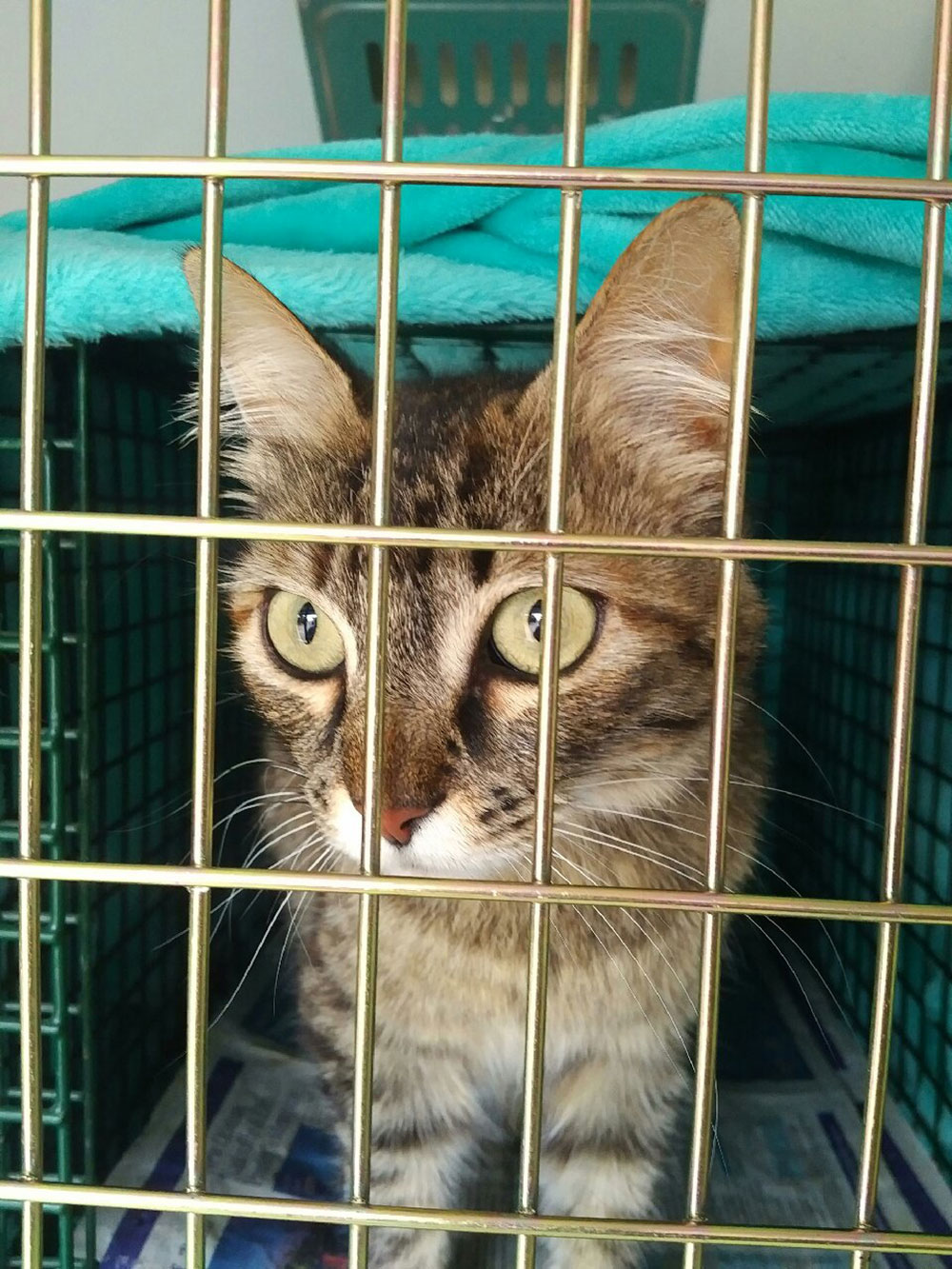 From Bari to Patras

Courier J boarded the ferry at Bari with travel boxes for nine dogs on the island of Lesvos, who are travelling to the UK via Paris Charles de Gaulle. Our friendly, dependable pet taxi driver Akis met courier J at Patras port, took the travel boxes to Piraeus port, and put them on a ferry for Lesvos, where Rebecca (Lesvos Stray Cat and Dog Adoptions) collected them. 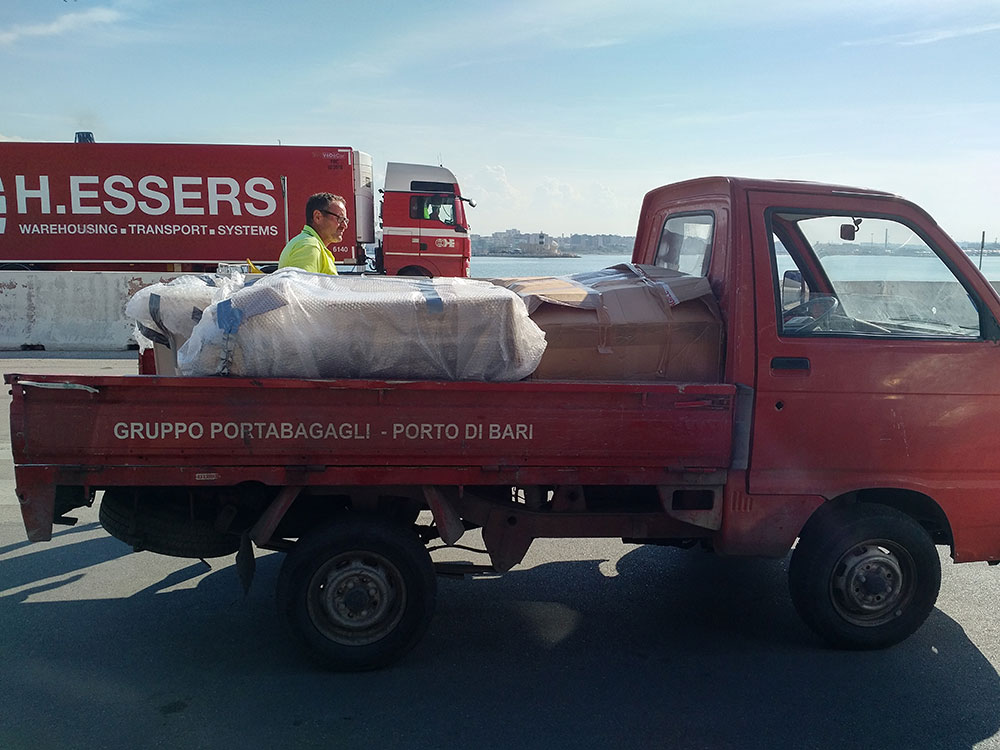 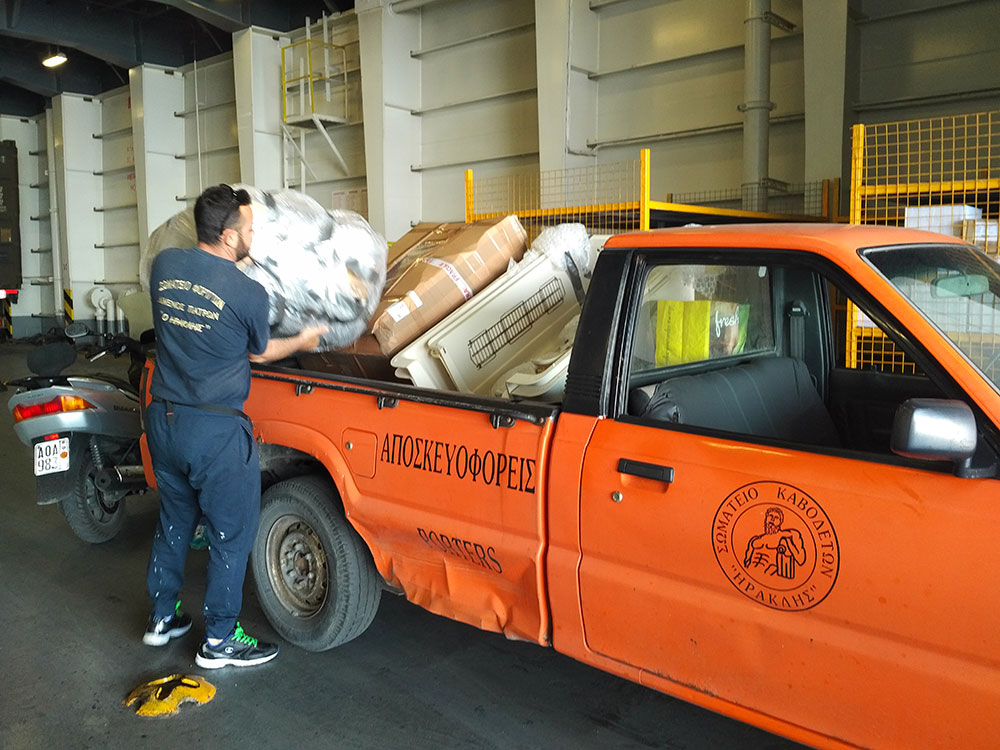 Another small truck was needed at Patras! Courier J received so much help, and at no charge. Thank you, port support staff at Patras! 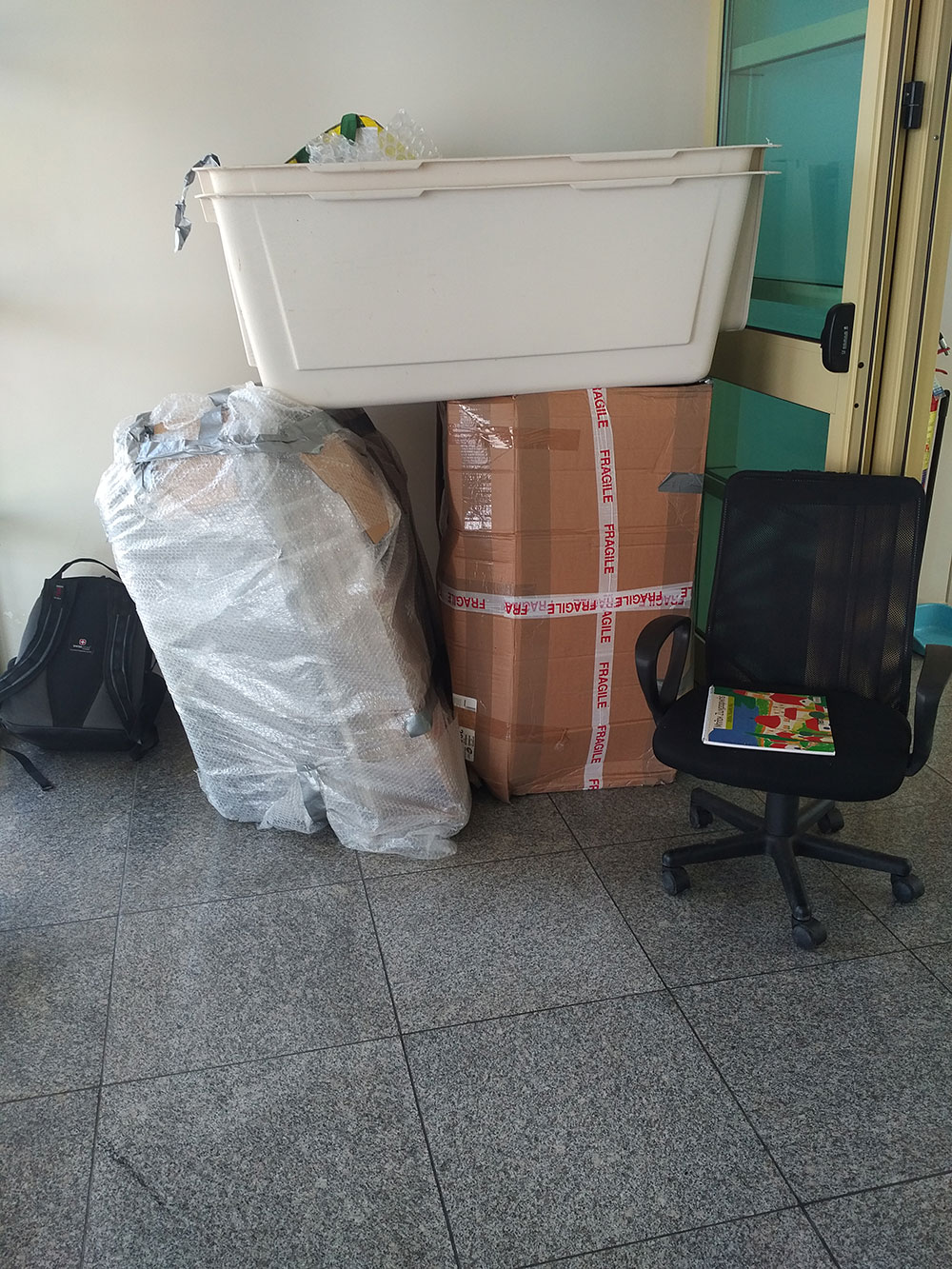 Waiting for Akis at the passenger terminal, sketching to pass the time 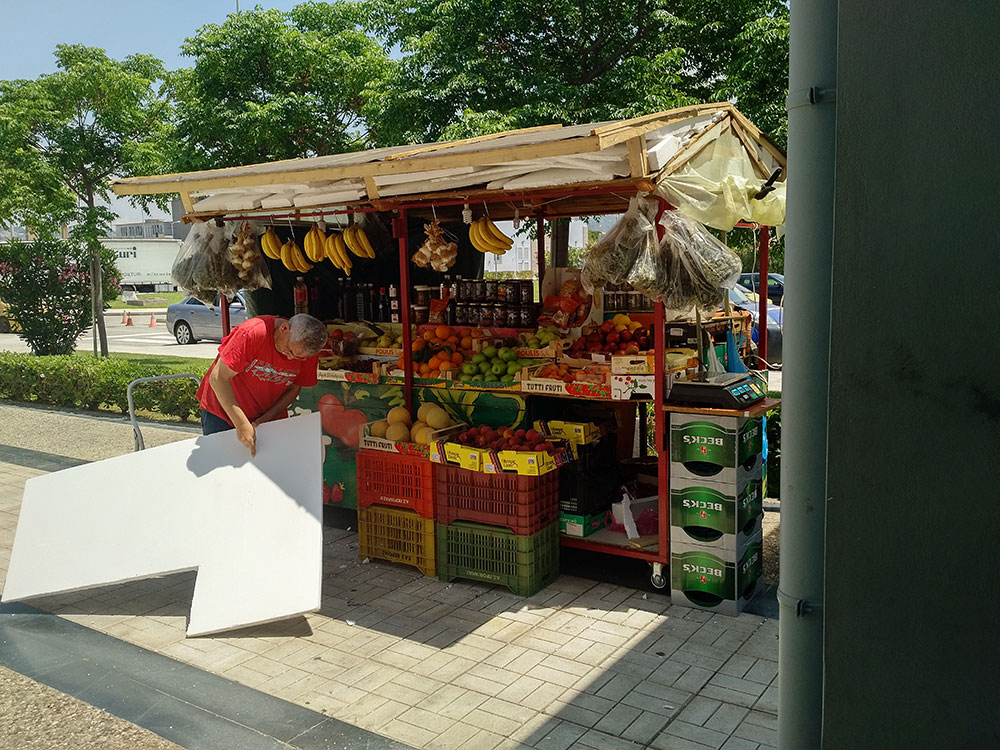 With a few minutes to spare to have a quick look around this international ferry terminal, courier J noticed that a lot has changed over the past few years.. When austerity kicked in, there were closed windows, everything was quiet and there were just a few people waiting in departures. Now, instead of feeling like a ghost town, it’s much busier, with traders and shops appearing. That’s good news for this part of Greece.

From Patras to Ancona with Boomer, Hector and Samson

As well as collecting the travel boxes brought by courier J, Akis had gone on ahead to the Palace Hotel to collect UK-bound passengers travelling by road: dogs Boomer and Hector, and rabbit Samson. Akis helped courier J get onto the Ancona-bound ferry, where the dogs travelled in the onboard kennels, and Samson shared courier J’s cabin. 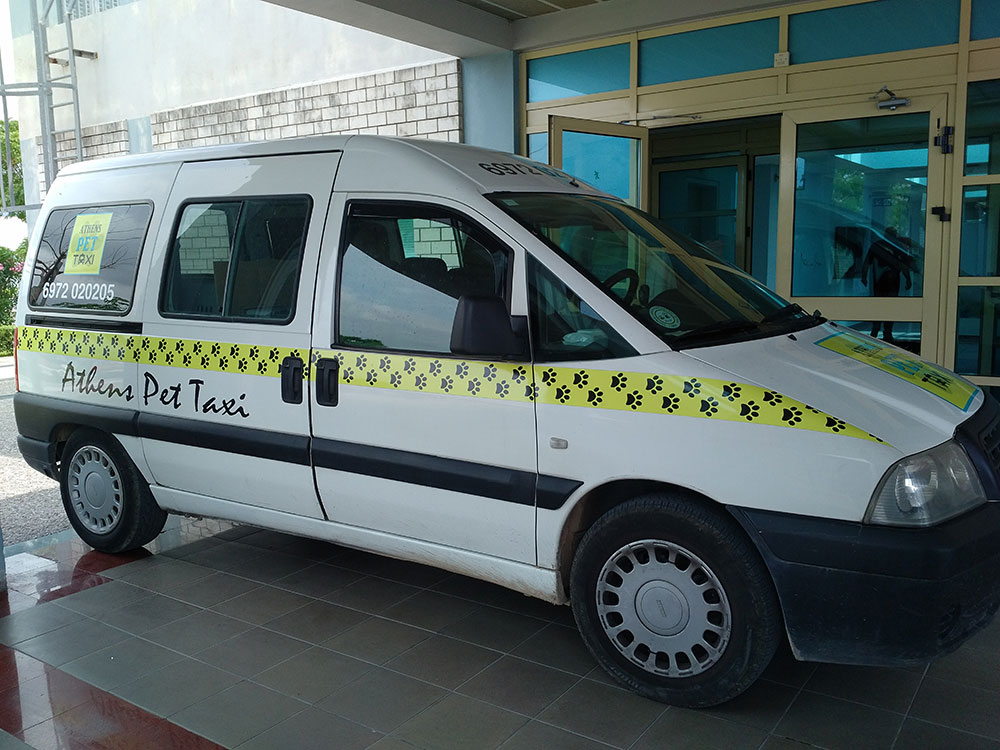 Dependable Akis arrives, calm and collected. He had to get a special pass to come into the port. 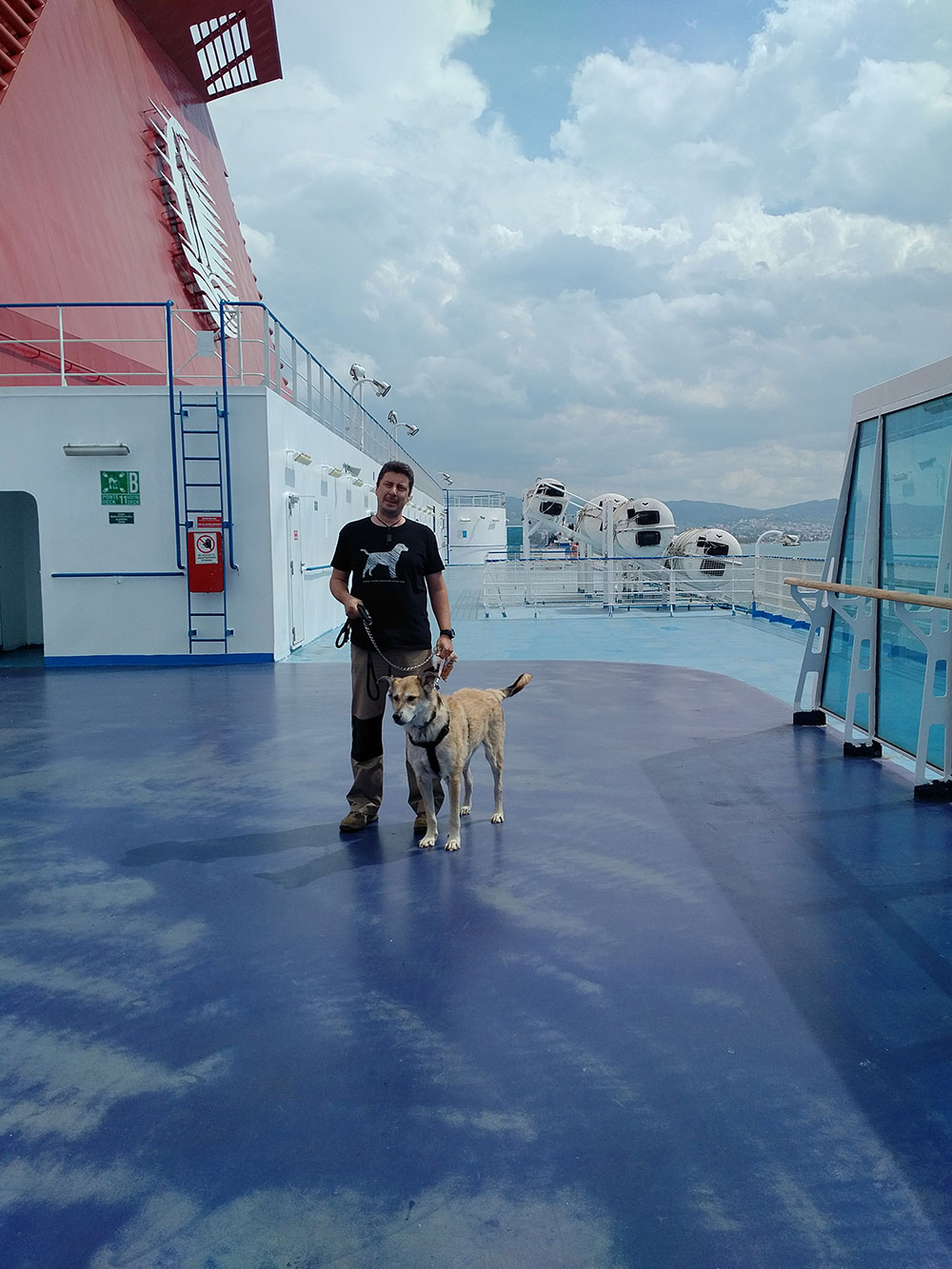 Akis on deck with Boomer, a handsome, sensitive Labrador/Alsatian cross from Athens. He’s on his way to Nottingham to rejoin owner Allan. 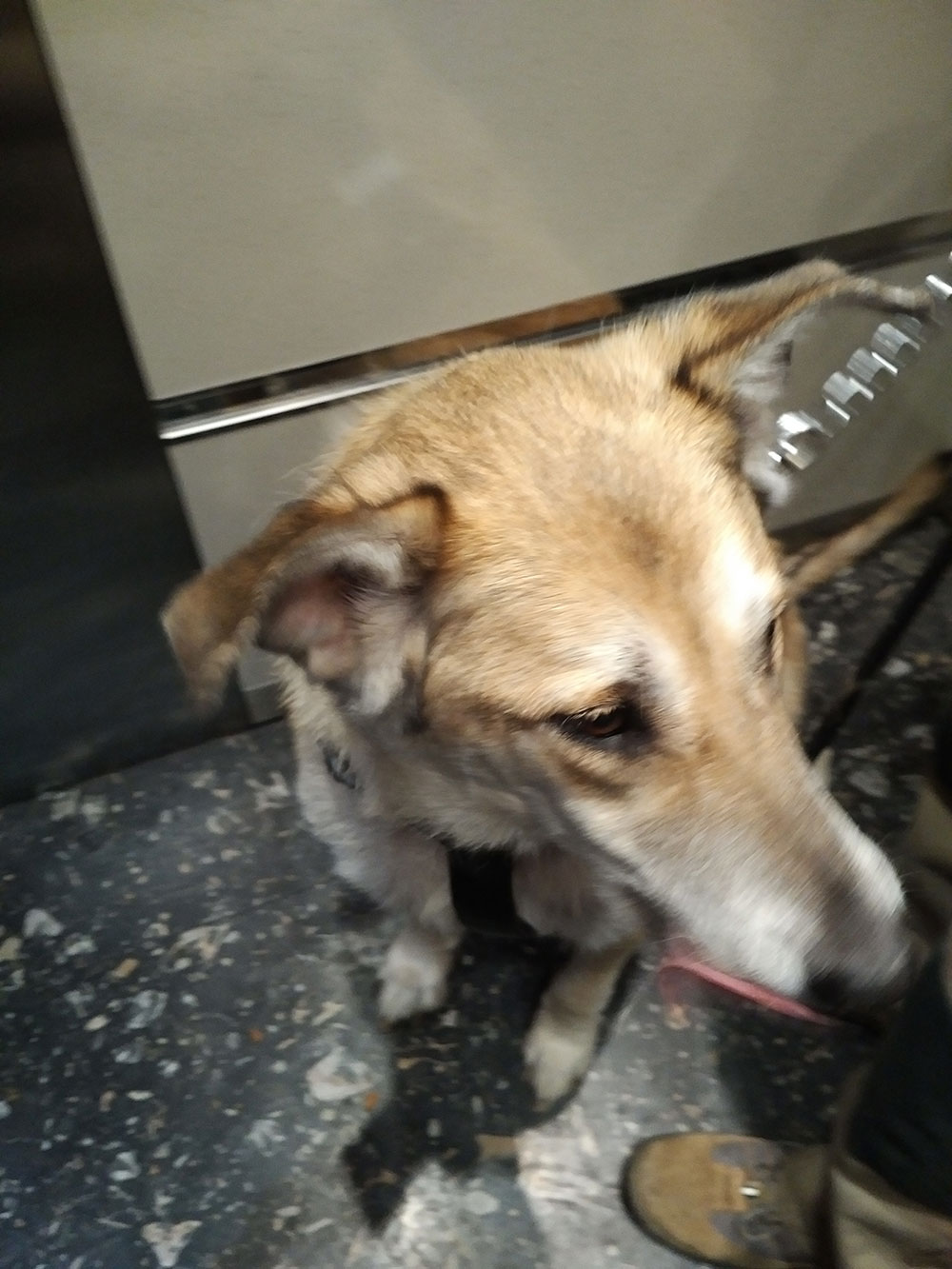 In the lift with Boomer, on the way to the onboard kennels 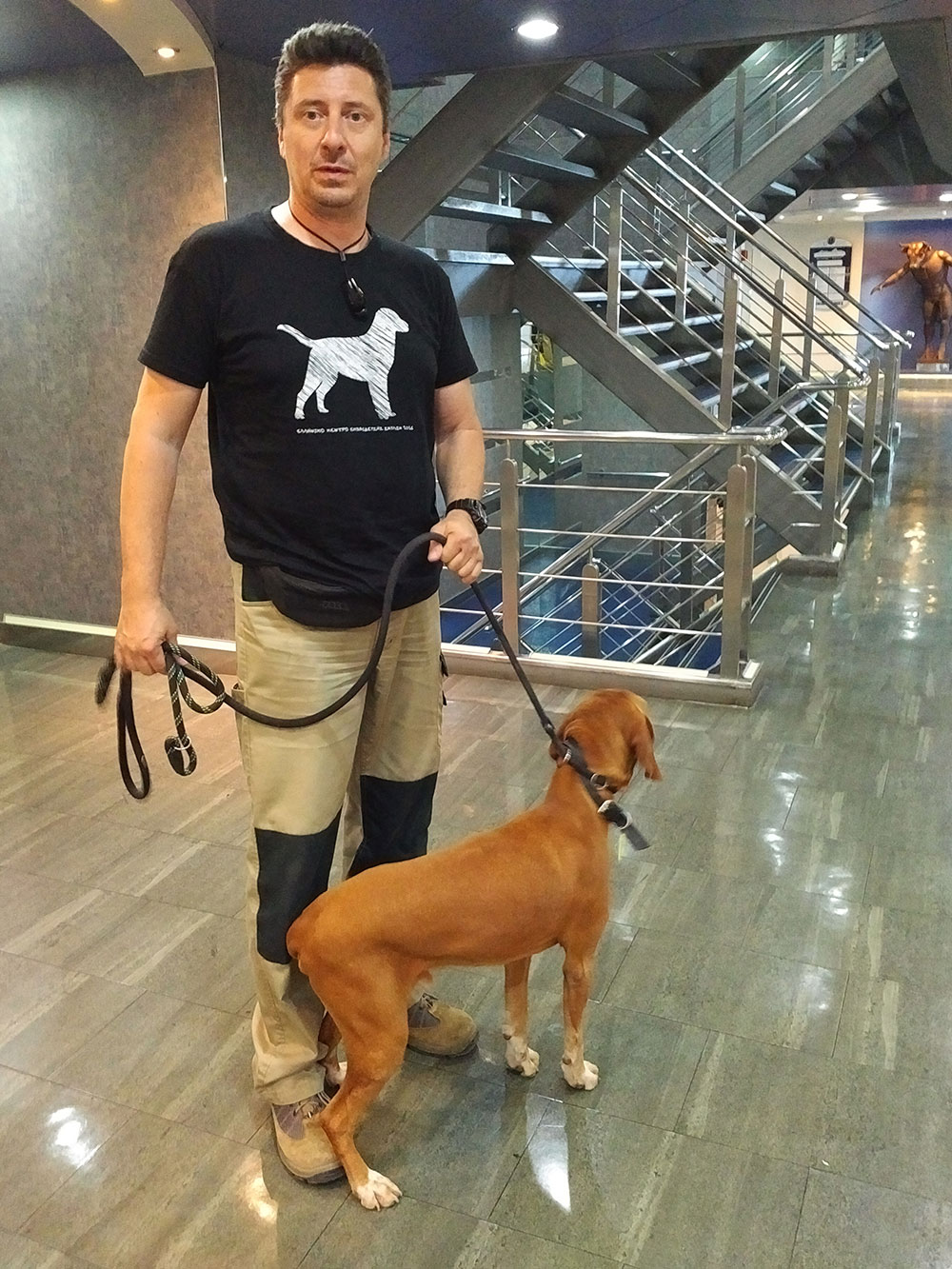 Akis walking Hector, a gorgeous Visla, who’s travelling with us from Athens to rejoin Evangelia in London. 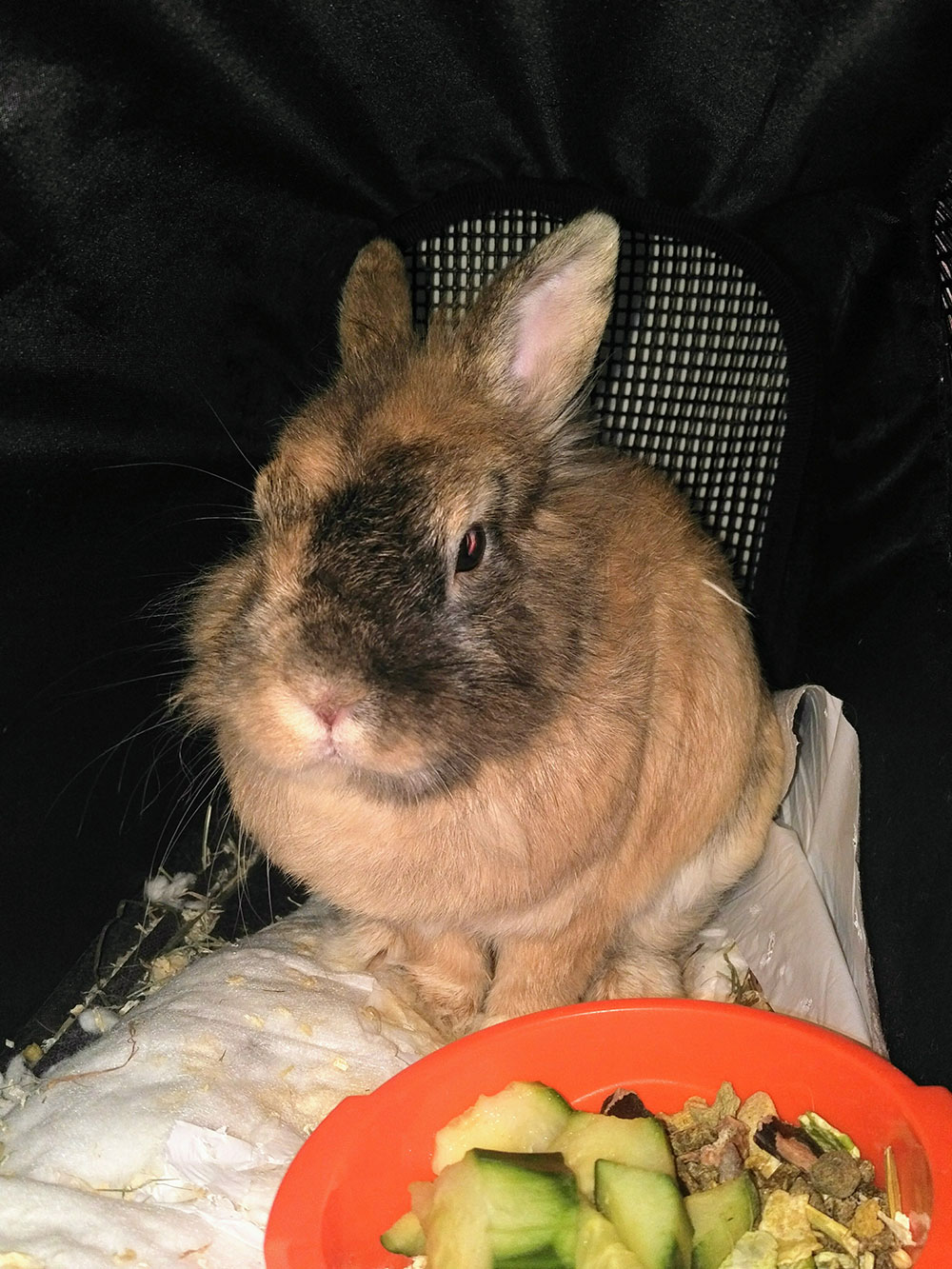 Rabbit Samson, who belongs to Anna, seems to be enjoying the cruise. 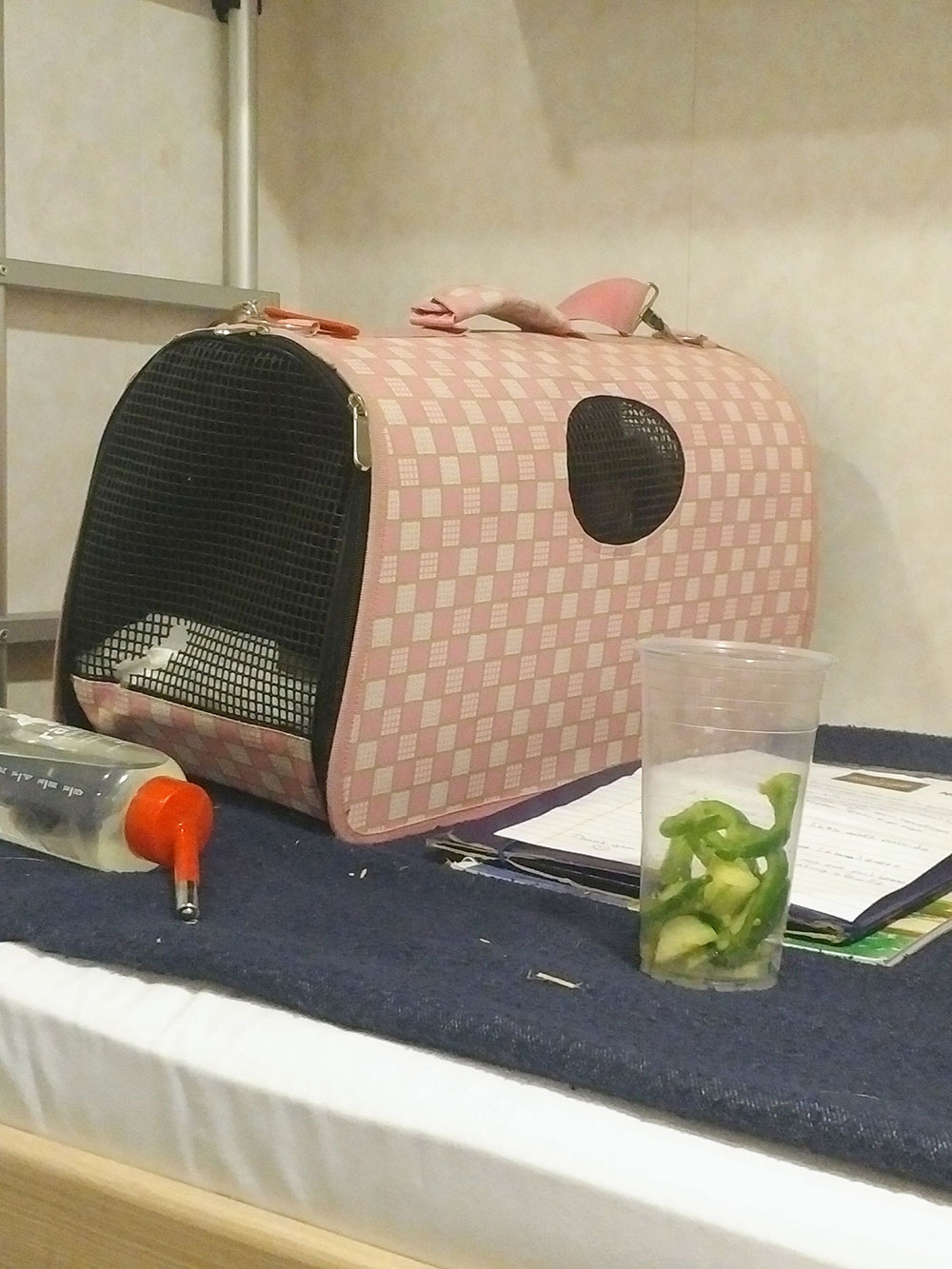 He’s based on the spare bed in courier J’s cabin. One of his favourite foods is cucumber, and there’s plenty of it on a Greek ferry!

22 hours after leaving Patras, the ferry docked at Ancona in Italy, where courier M was waiting to meet courier J. There was help on hand as we disembarked, with port security, amused but supportive, giving us clearance to come and go between the ferry and our van to get everyone settled in. 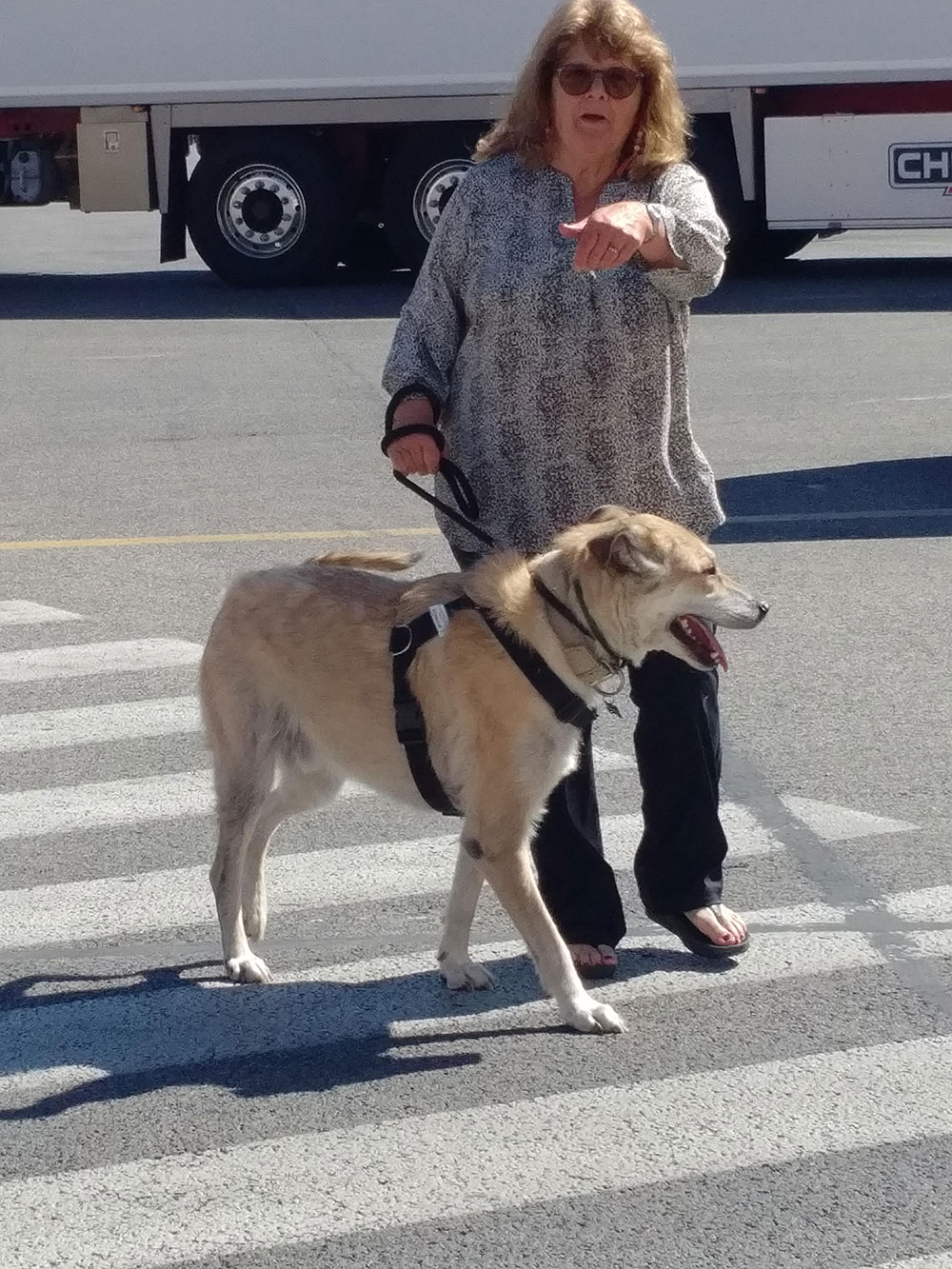 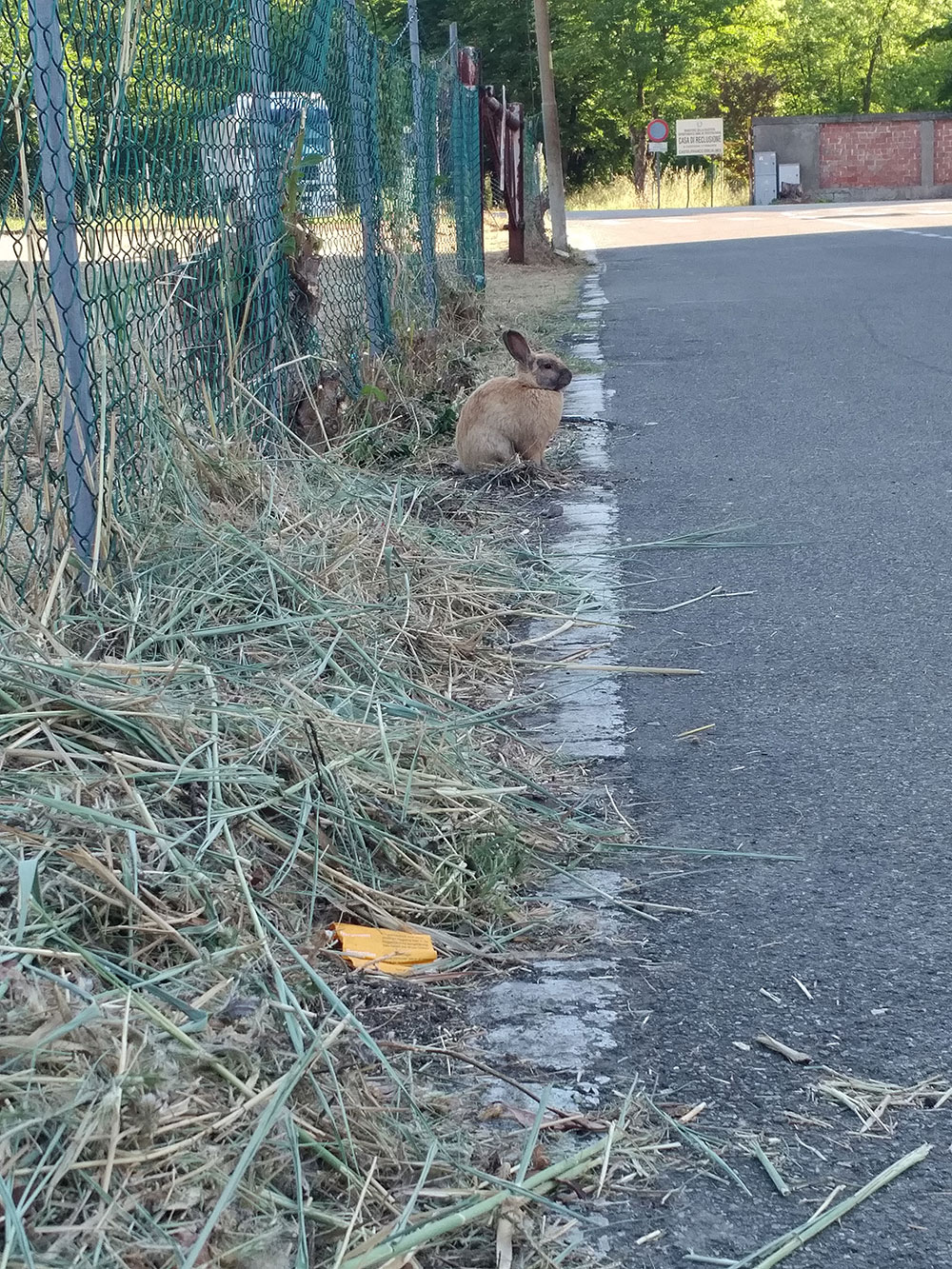 In a field near our hotel, we saw a small colony of rabbits which had escaped from a nearby petting zoo and made it their new home

On the way back to the UK, we stopped off in Milan so that courier J could catch a flight back to Lesvos, to help get the nine dogs ready for the journey to the UK.

Courier M continued on to the UK with Pipi, Boomer, Hector and Dylan. He’ll then make his way to Charles de Gaulle airport to meet courier J and a colleague, who are flying with the Lesvos dogs to Paris. 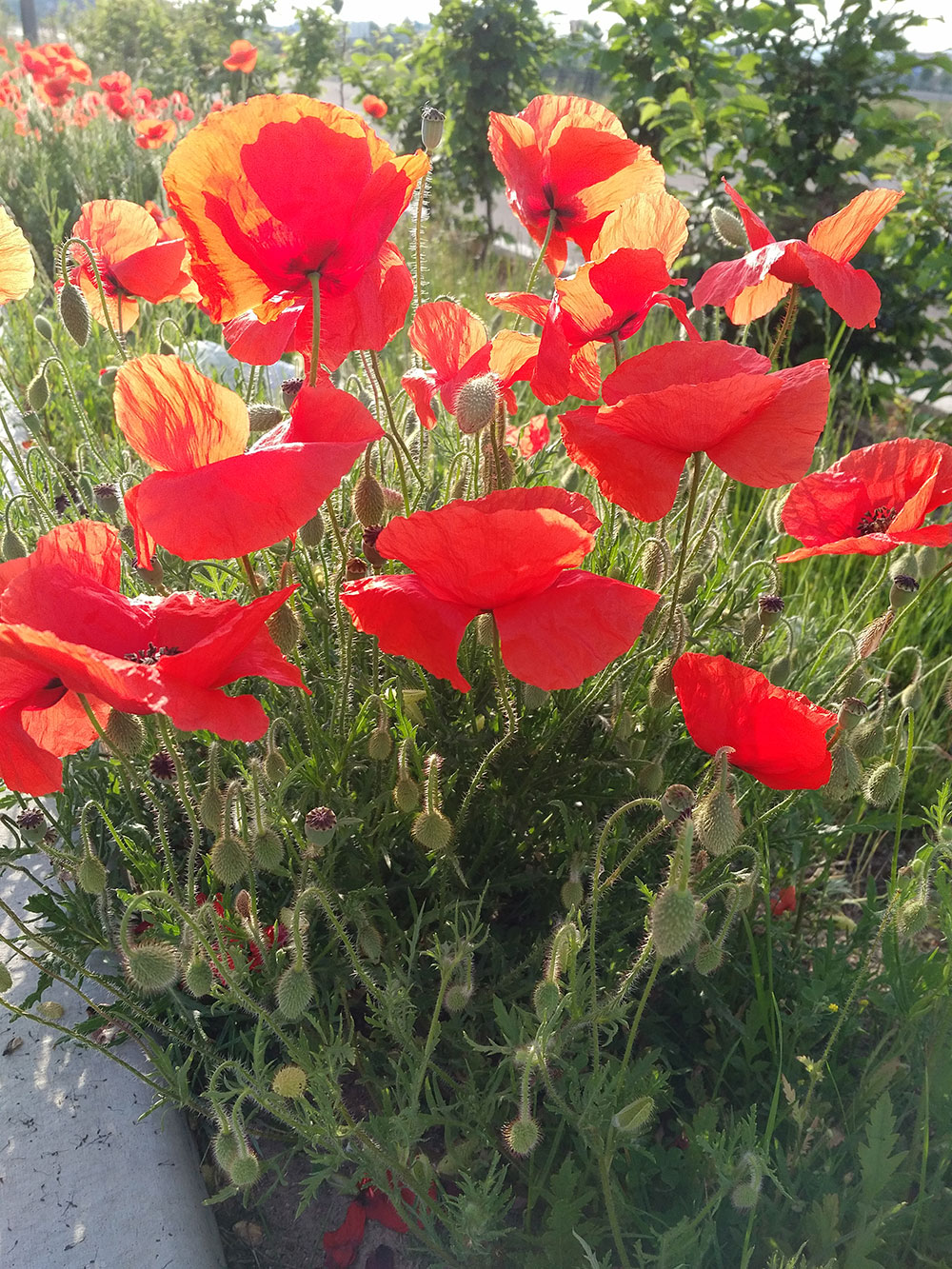 Spotted in northern France — poppies, a symbol of the First World War, are in bloom everywhere. Together with the graveyards in this part of France, they’re a poignant reminder of all those very young men who lost their lives in battle.