Pets take off for the Middle East; and we catch up with recent passengers from Greece

While our couriers have been on the road with pets travelling in Europe, several intrepid dogs and a kitten have boarded planes to travel further afield.

Lovely Lola was one of our first passengers to the United Arab Emirates this year, when she flew to Dubai in January. Her owner had moved there just before Christmas and was keen for Lola to join him as soon as possible.

Lola flew with Emirates, and Dubai Kennels and Cattery took care of her clearance and transfer to her home. 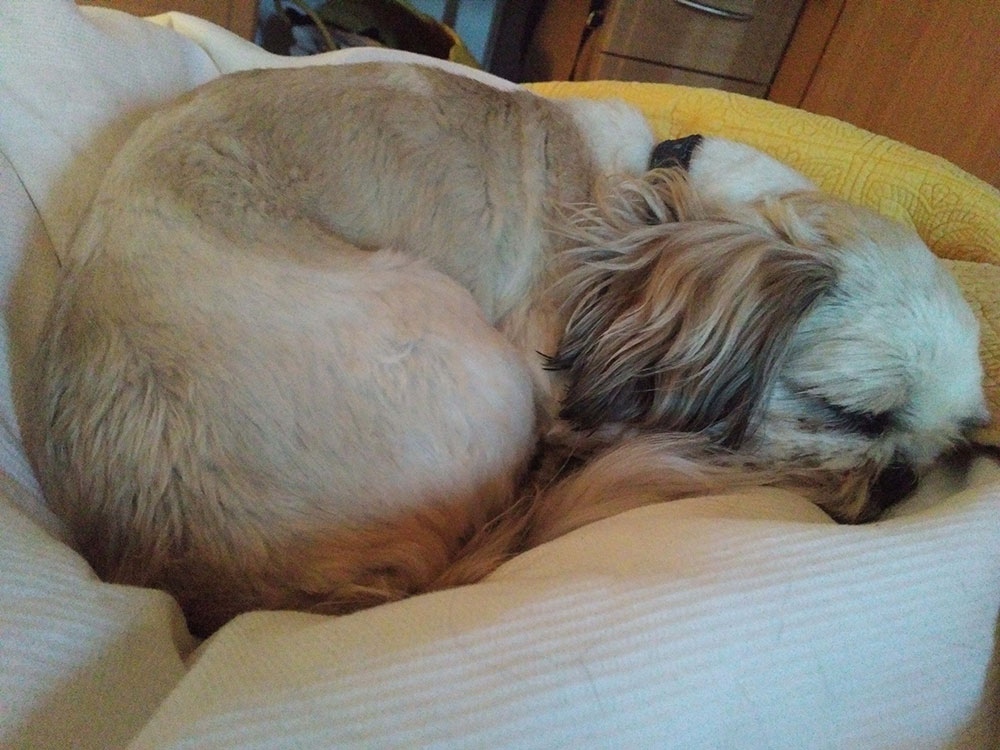 Lola homeboarded with Animalcouriers before her flight. She certainly knows how to take it easy!

Pretty young kitten Poppy also jetted off to Dubai. Her owner was rather anxious about how Poppy would manage travelling, but she seemed to take it in her stride. After being reunited with Poppy, her owner wrote to say:

“This was my first ever experience sending a live animal abroad! Finding the right company — and people who care — was the key. When I saw her at the Dubai Kennels and Cattery office, I was so happy!”

Like Lola, Poppy flew with Emirates, and had her clearance and transfer handled by Dubai Kennels and Cattery. 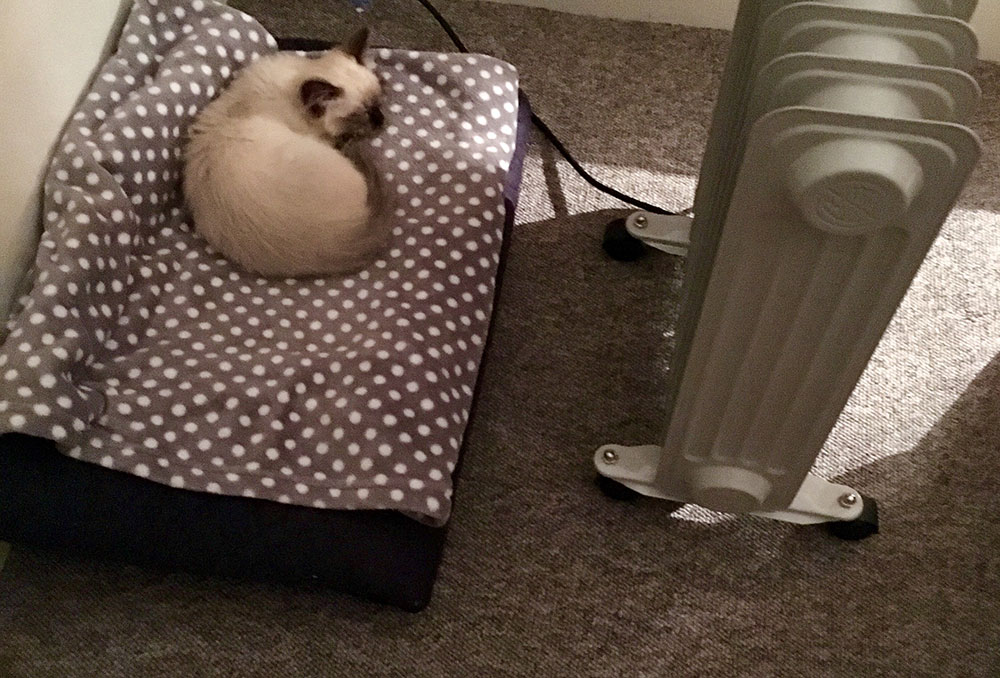 Poppy before she left the UK — we feel sure she’ll enjoy the warmer climes of Dubai!

After their holiday in Portugal, we brought this dynamic duo back to the UK. When they were ready to rejoin their family in Saudi, Animalcouriers organised their paperwork and their Lufthansa flights.

Once the vet had completed their export health certificates, the paperwork was taken to the Saudi Embassy to be legalised. RF Consular Services did a great job ensuring the paperwork was back in time for Fox and Nim to check in for their flight. 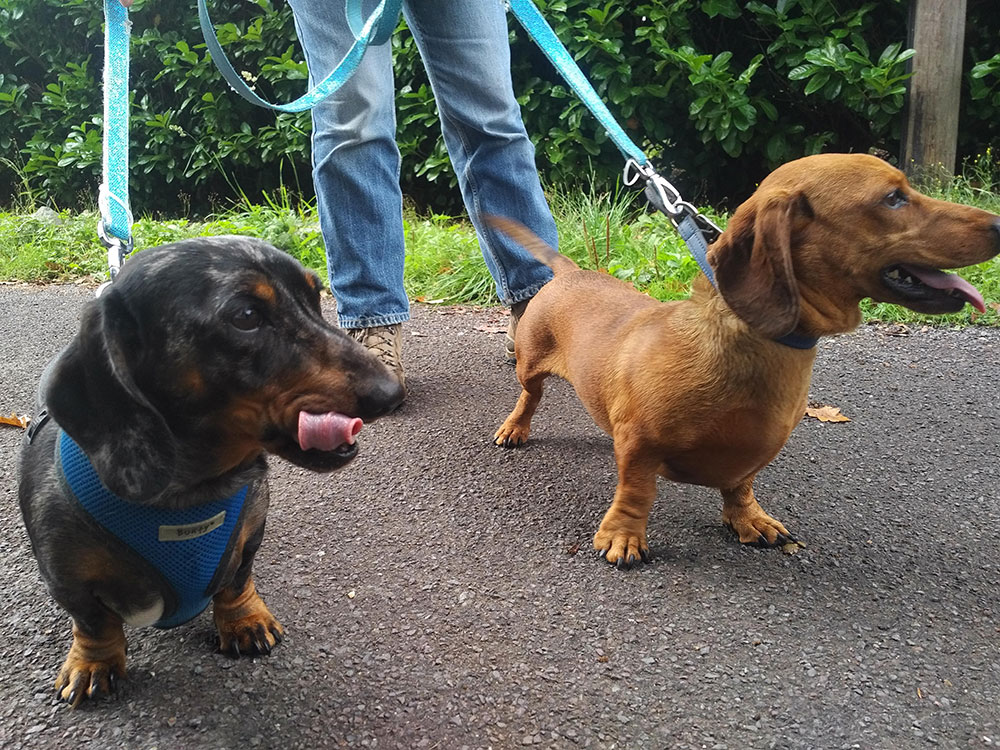 Shortly before Christmas, this cute pair of West Highland Terriers flew with Gulf Air to Bahrain to meet their new family. They homeboarded with Animalcouriers while we made the arrangements. Delmon Pet Relocators organised their import paperwork and clearances. 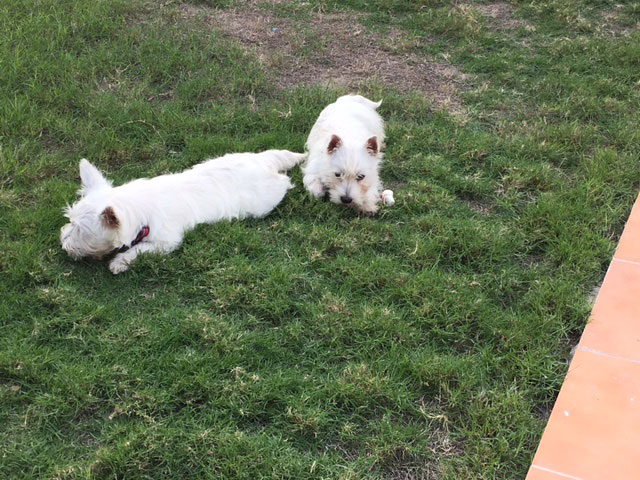 Inseparable Iona and Skye were playful and entertaining houseguests 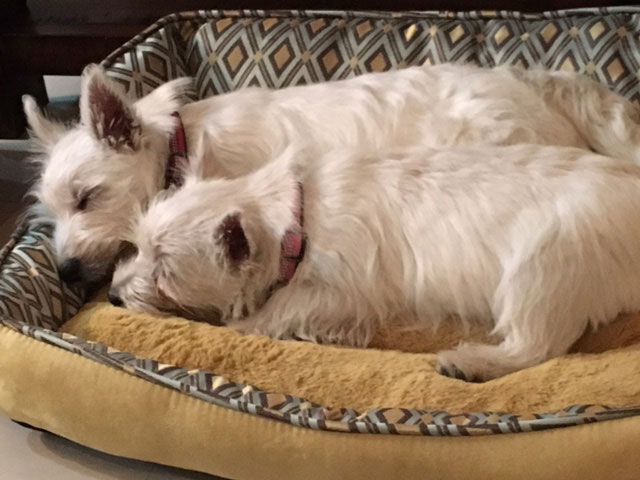 Even this energetic pair occasionally need some downtime

Coco travelled on our most recent road trip from Greece. Rescued on Lesvos, and with her trip to the UK sponsored by the Wild at Heart Foundation, this gorgeous girl has a new home in Scotland with Raymond. He reports that Coco has settled in very well and they’re enjoying each other’s company. 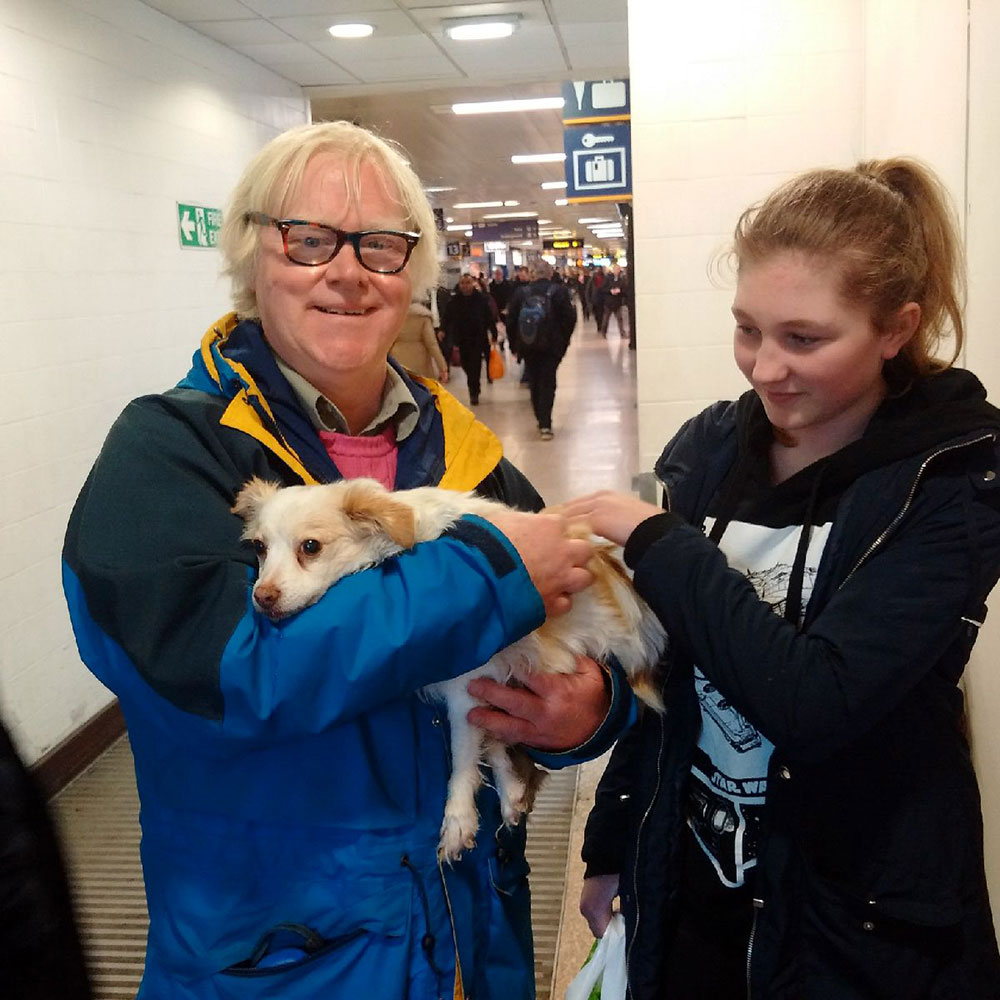 Coco with Raymond and his granddaughter Yvonne, preparing to board the Glasgow-bound train at London Euston 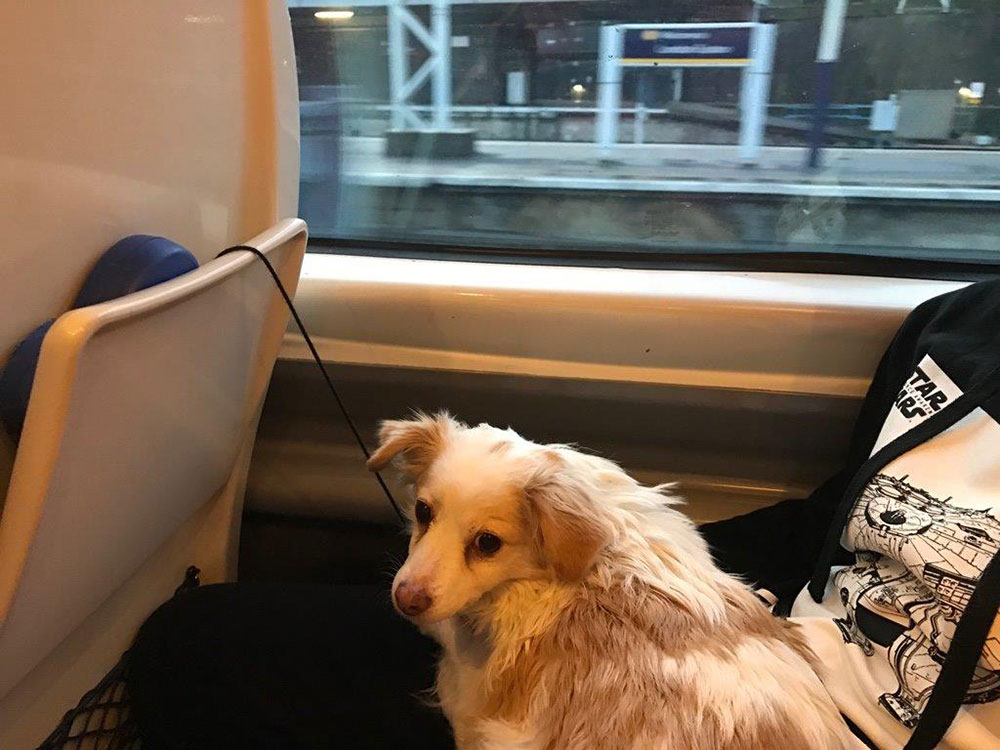 The story of Cinnamon and Derek is a truly touching one. Like Coco, these two dogs hail from Lesvos. Clever Cinnamon, a Mytilene port stray, attached herself to Royal Navy crew member Sam, who decided to adopt her. Rebecca from Lesvos Stray Cat and Dog Adoptions looked after Cinnamon and got her ready to travel to Sam’s family in Arbroath.

But when Cinnamon left, her friend Derek was bereft. Rebecca noticed him looking thin and dishevelled, so decided to try to find him a permanent home. Of course, the answer was obvious — Sam needed to adopt Derek as well! And brilliantly, he agreed to do so. 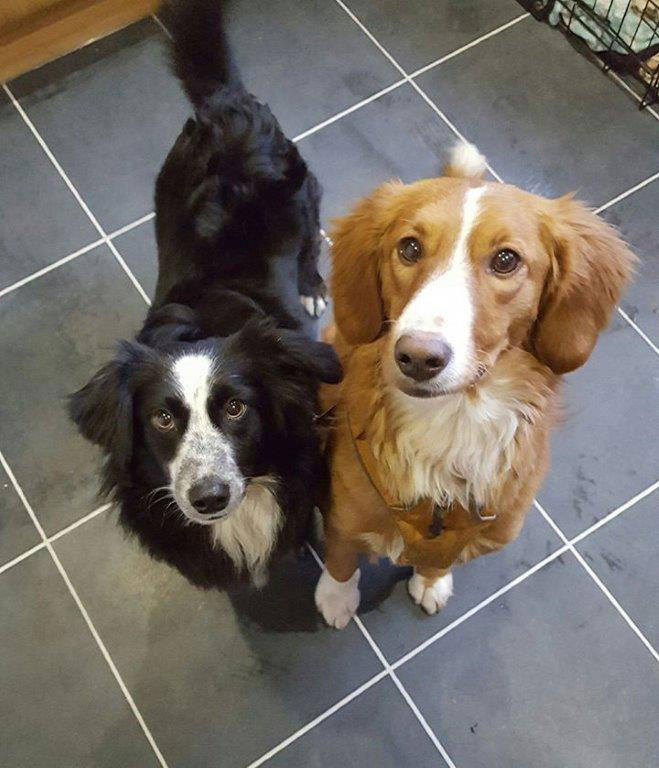 Derek and Cinnamon at home in Arbroath… 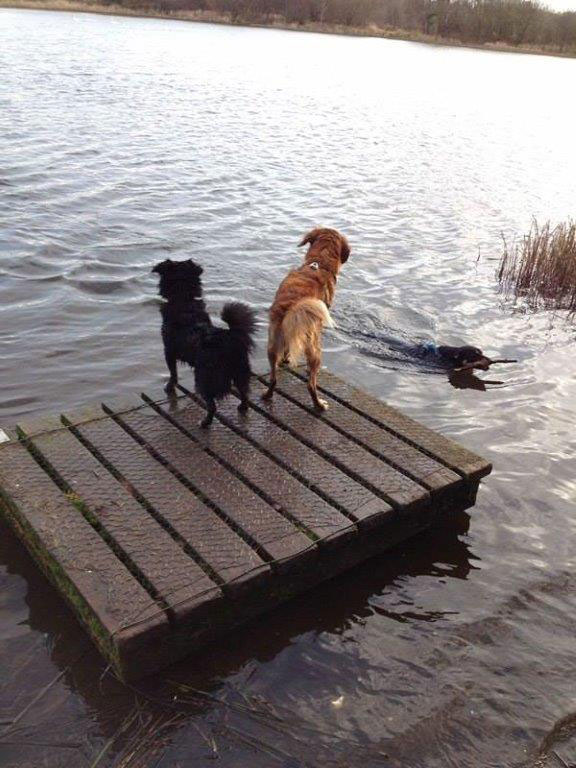 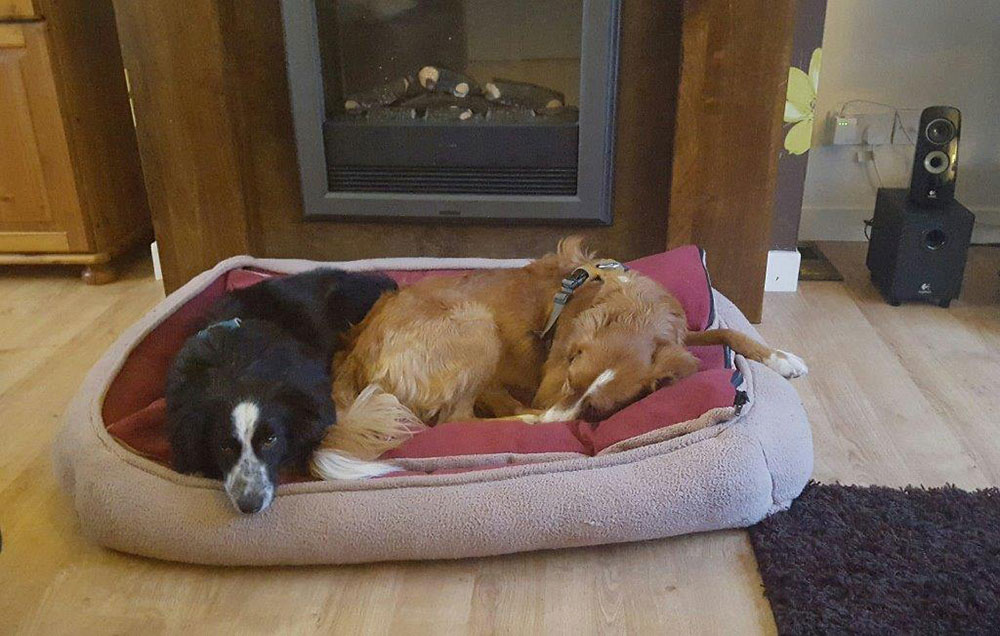