Six dogs and two cats from the mainland, and five dogs from the island of Lesvos, are travelling with us to the UK.

Akis, who runs a pet taxi service, did a sterling job to help round everyone up. After delivering Coco, Clifford, Squash and Georgie to their holiday destination on Paros, he headed over to Lesvos to collect our passengers from the island. He looked after them at his home overnight, then brought them to our meeting point the following morning.

Julius has been adopted from Lesvos by Andy. When Andy was volunteering at refugee camps earlier in the year, he befriended three stray dogs, and all three were lucky enough to be adopted by him!

He drove two home with him to Berkshire, but Julius wasn’t ready to travel at the time. Rebecca from Lesvos Stray Dog and Cat Adoptions helped out, and now Julius, is making the trip to the UK with us. 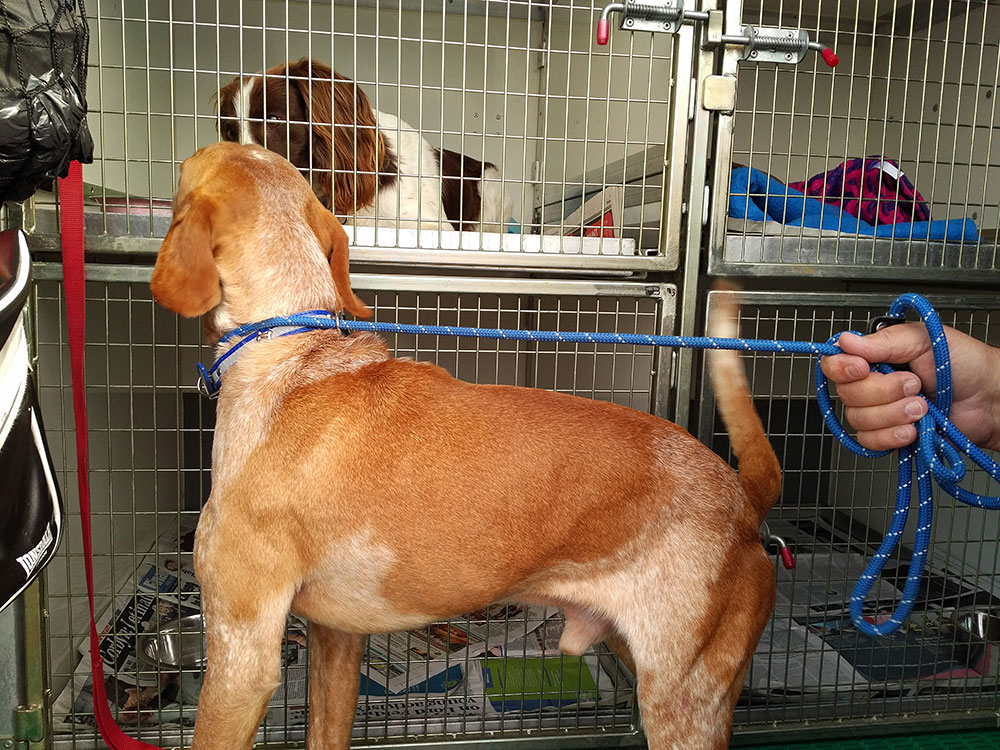 Julius greeting Chocco, one of our other passengers. Julius simply doesn’t stop moving — this is the only photo we have of him that isn’t just a blur!

These four lovelies have been adopted from Lesvos via the Wild at Heard Foundation website, and the foundation is supporting their travel to the UK. 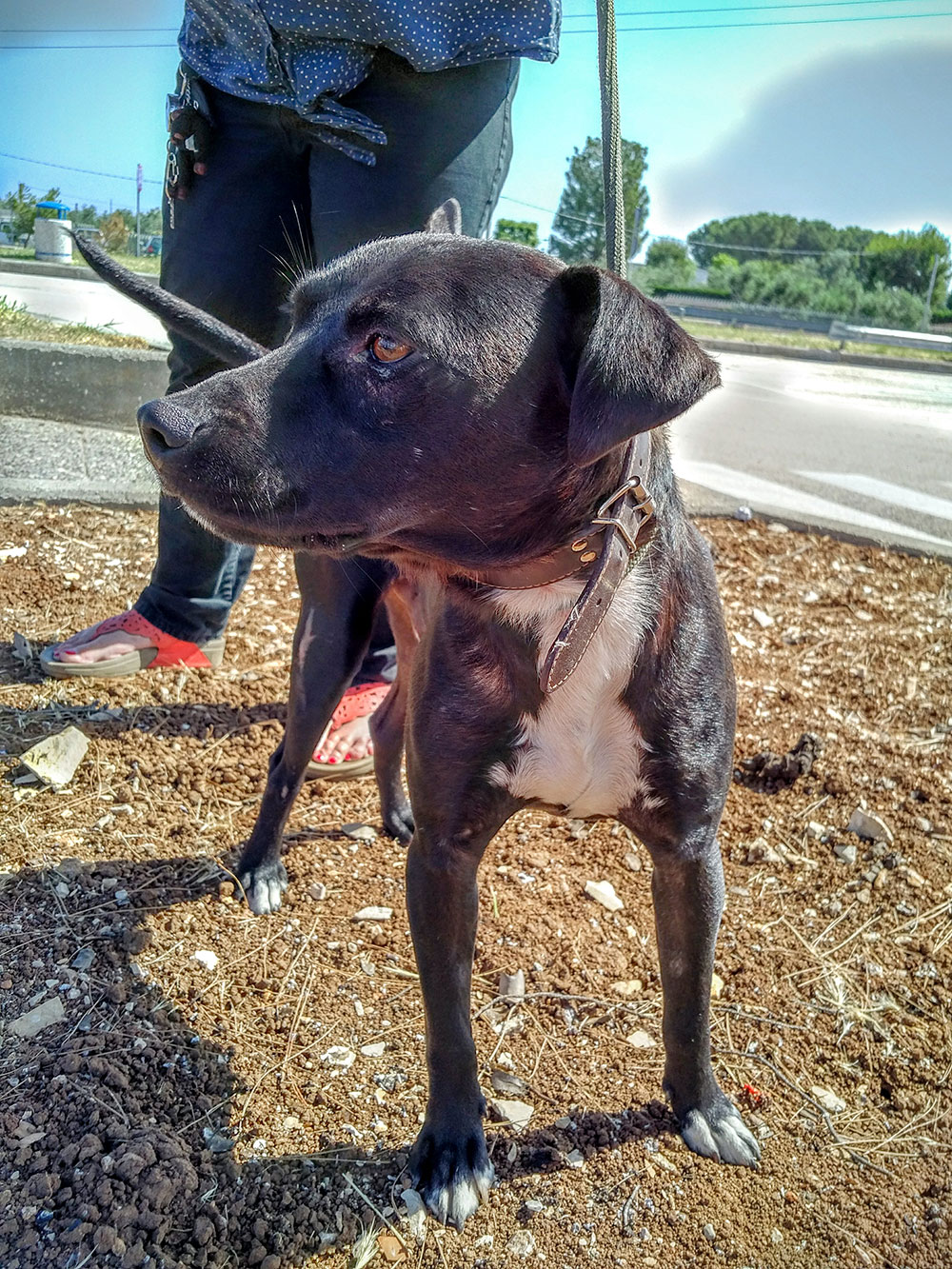 Handsome Blackie has been adopted by Natalya and Wayne and is on his way to them in Edinburgh. They adopted another dog from Lesvos last year, who also travelled with us. 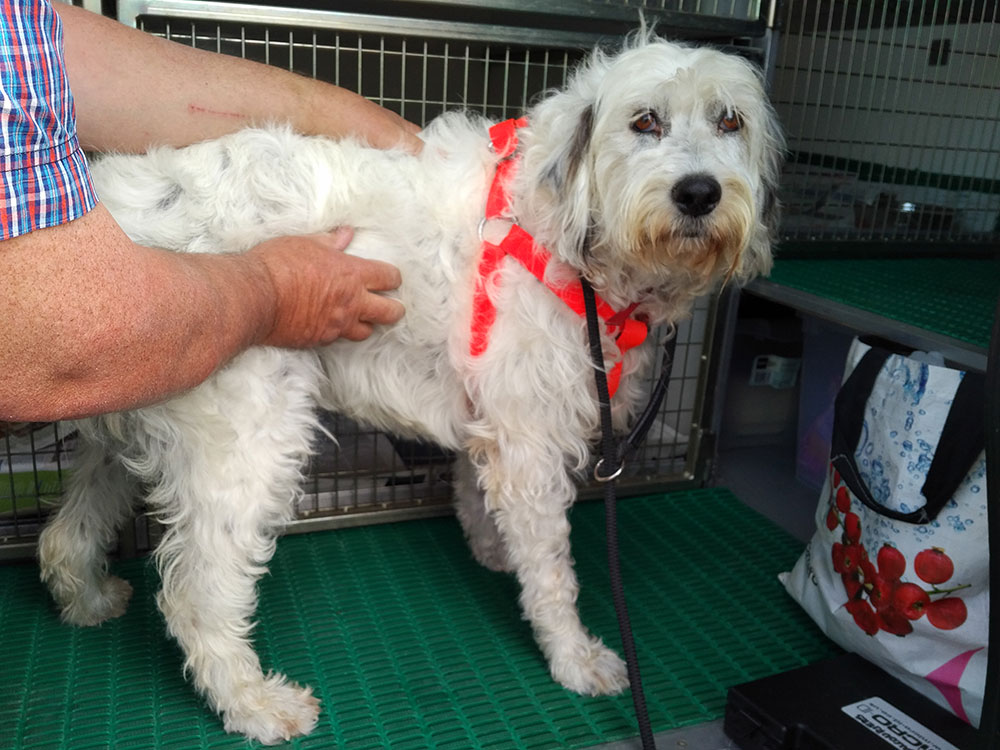 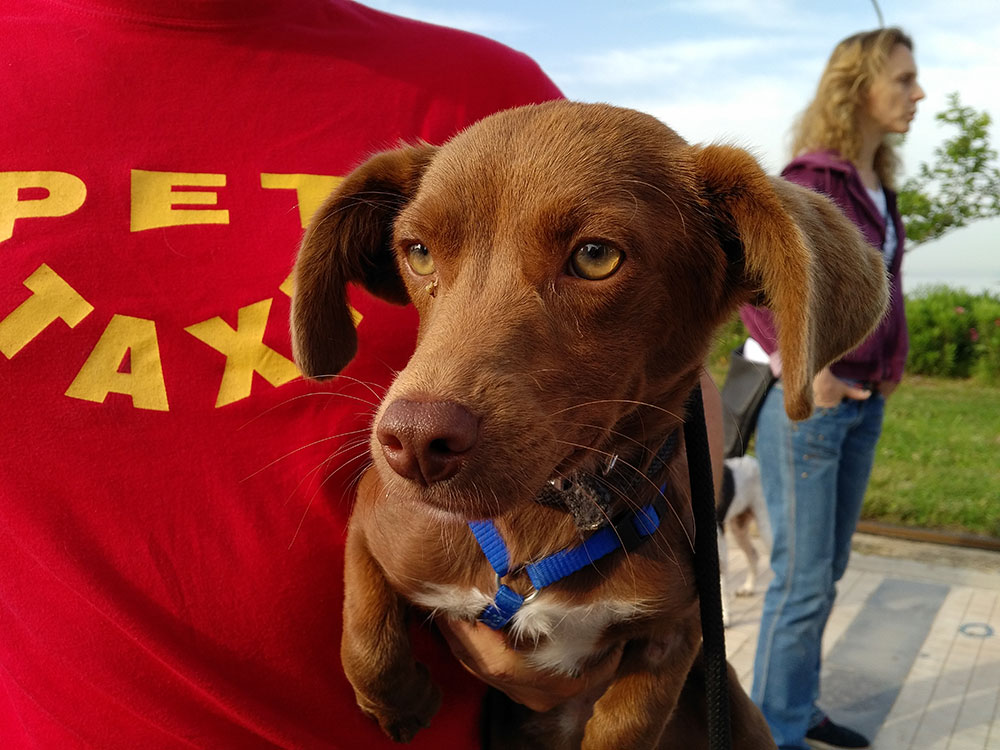 Little Leonard arriving with Akis — Leonard’s been adopted by Janice in East Sussex where, coincidentally, he’ll be living in St Leonards! 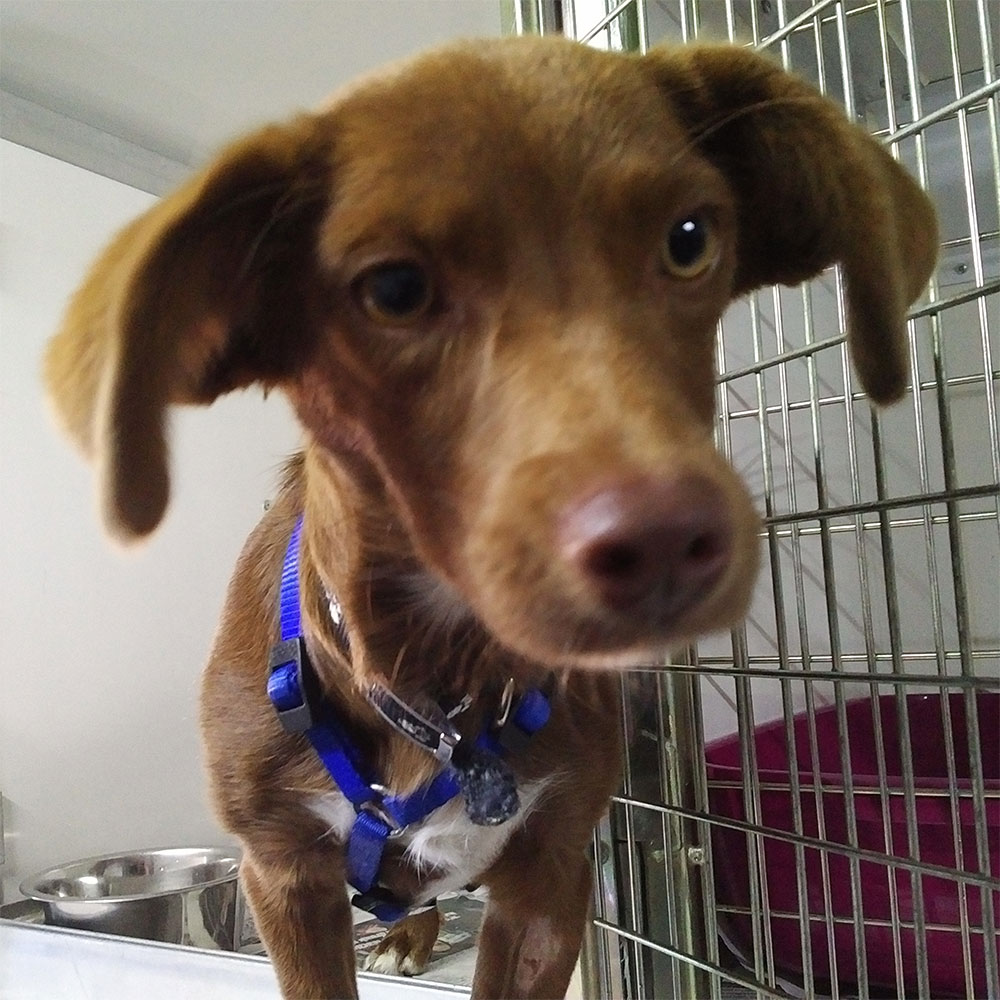 Leonard has a very good nose — he can smell a dog chew a mile off! 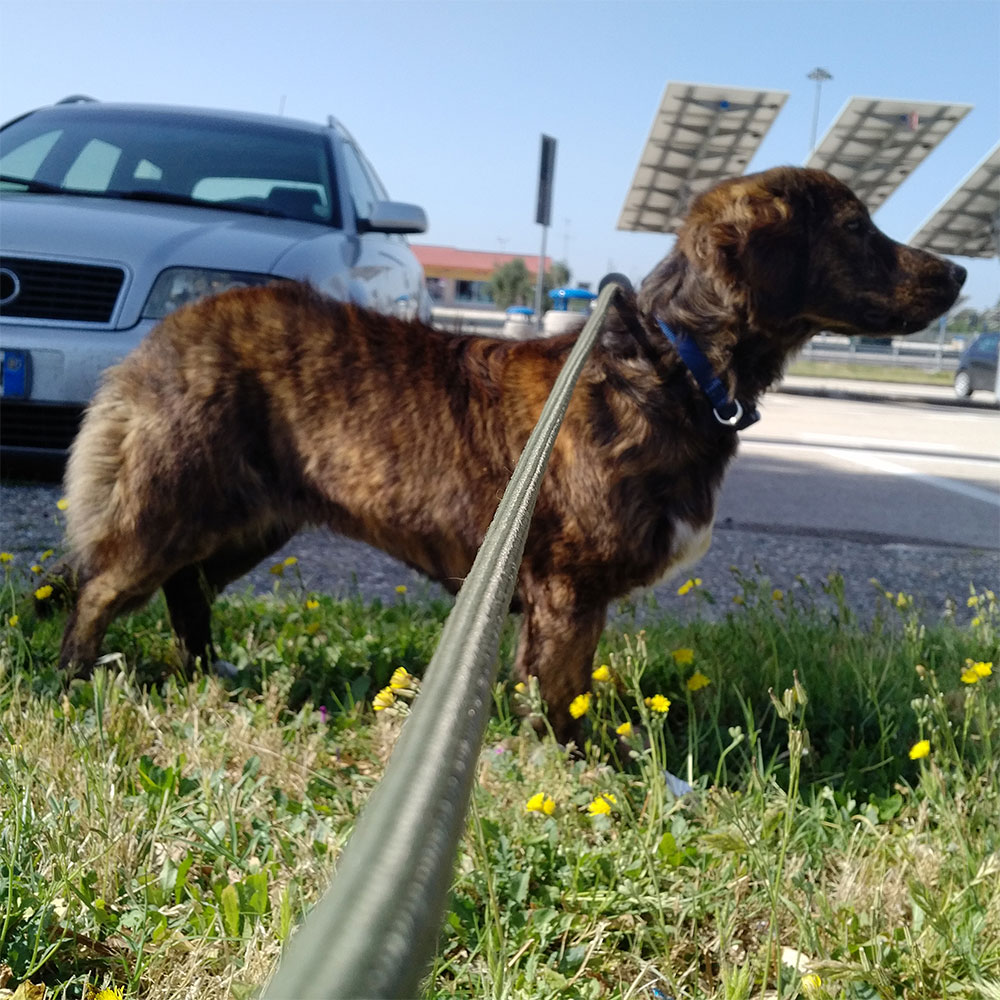 Glamorous Tess, who has quite the softest coat, has been adopted by Susan and is moving to Chelsea, where she’ll fit right in to London life

Chocco was found starving on the streets by Tracey, who immediately took him in. Now Tracey and her daughter are returning to the UK, and Chocco is travelling with us to join them there. 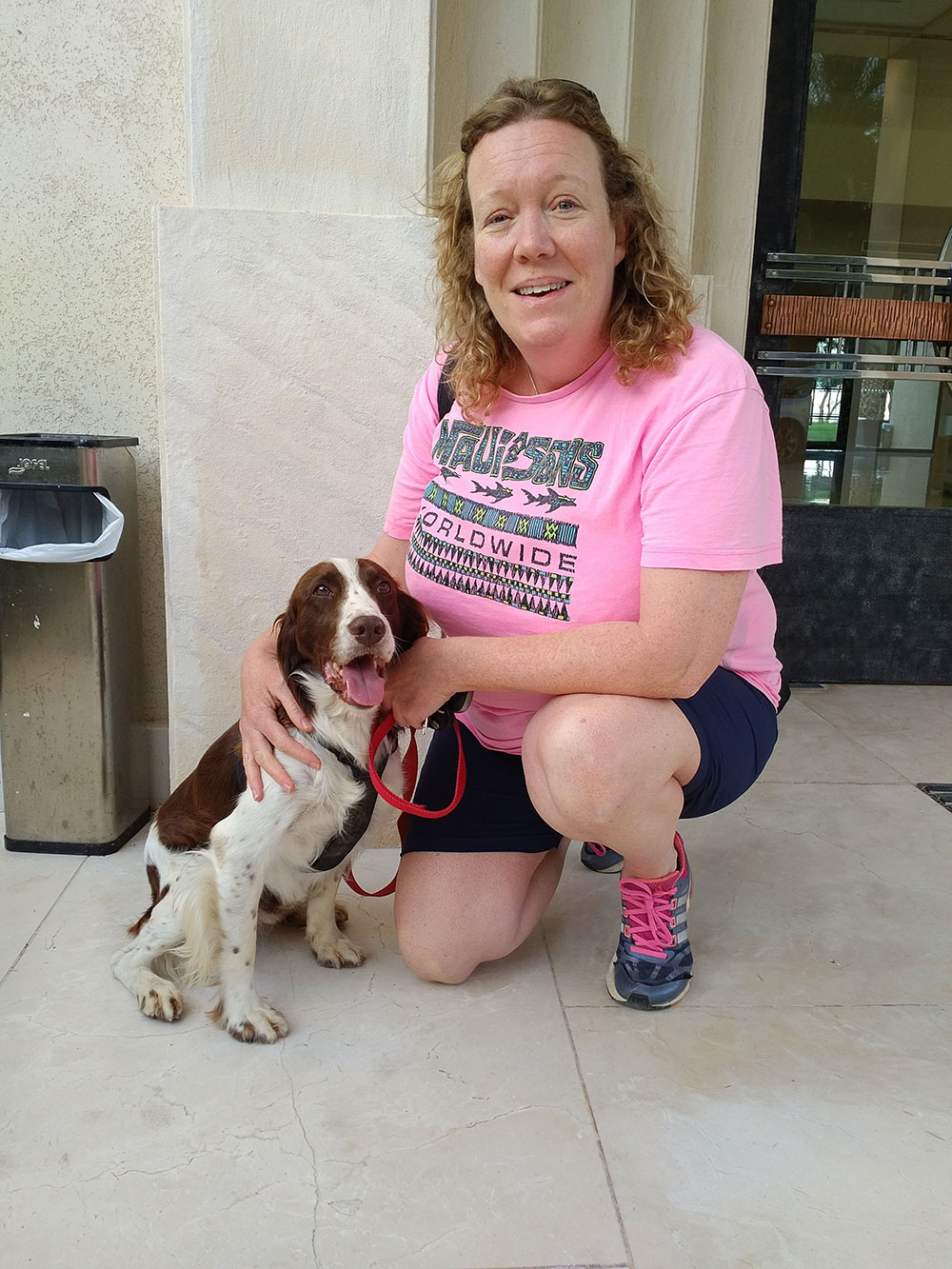 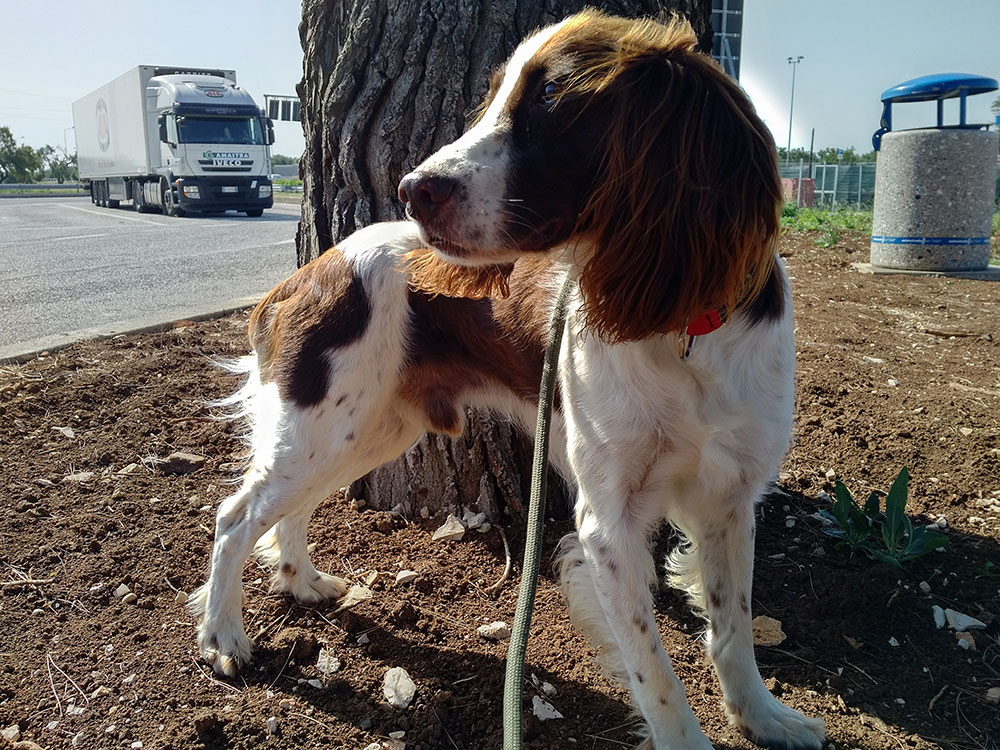 Chocco is very alert and interested in everything — people, birds, new smells…

Kiki and Martha from the Filozoikos Shelter in Athens brought us Sylvia, who was handed in to the shelter as a very young puppy. That was three years ago, during which time she’s never been beyond the bounds of the park where the shelter is situated. Kiki and Martha are over the moon that Sylvia has finally found her forever home in the UK. 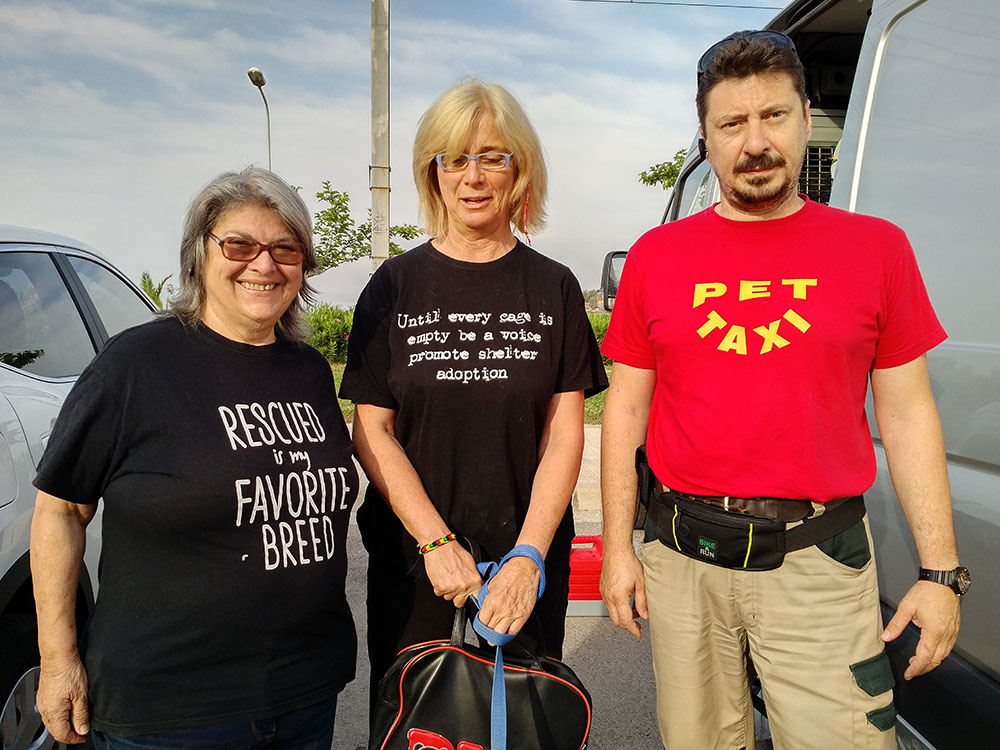 Kiki and Martha wearing special T shirts promoting shelter adoptions; with Akis, whose pet taxi service is a such a boon to us 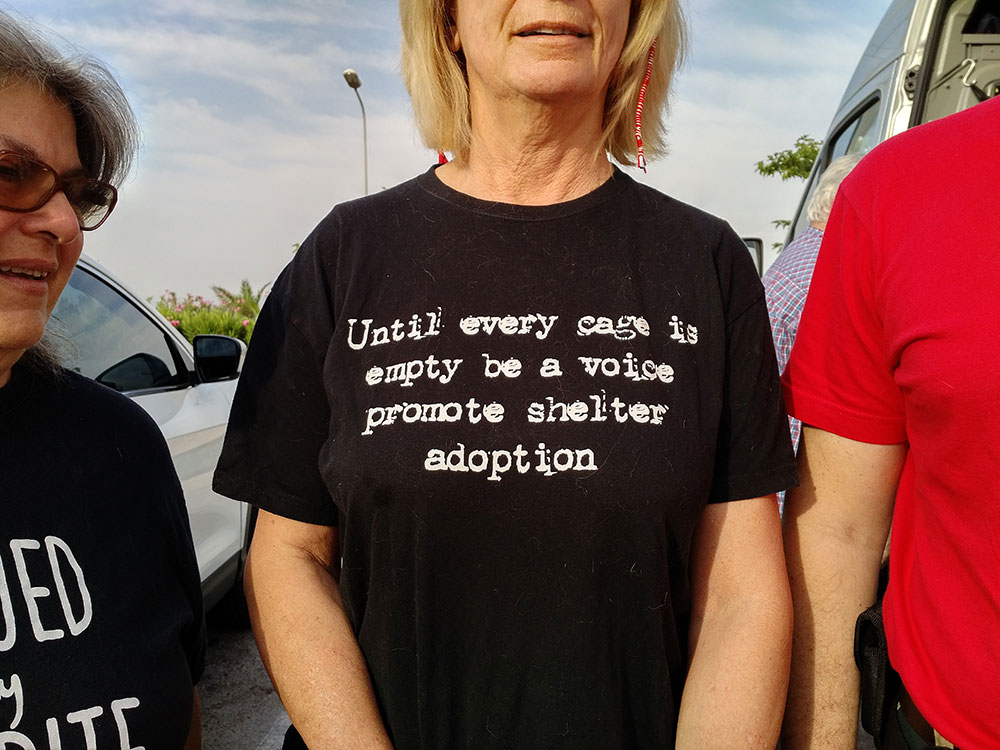 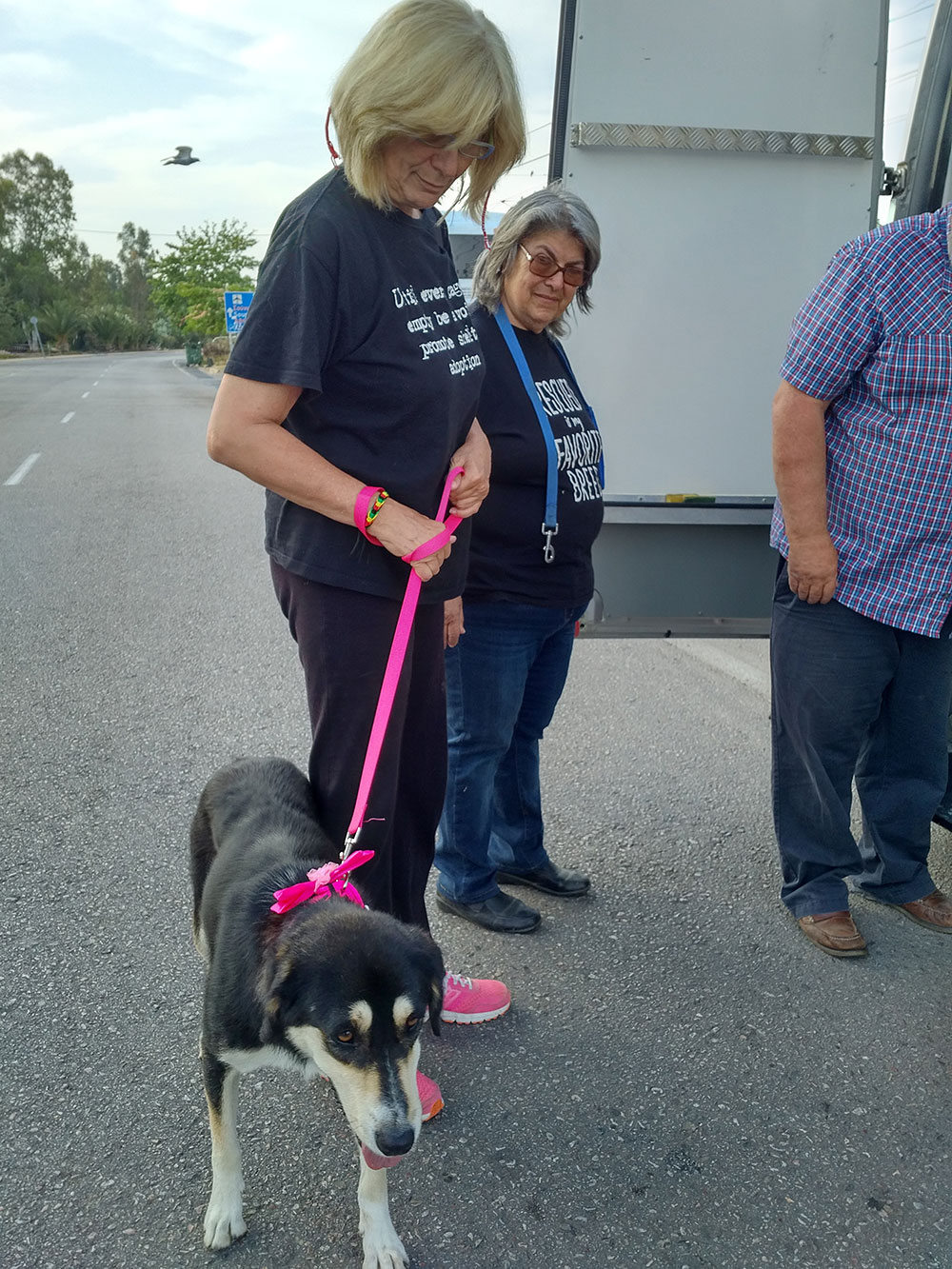 Sylvia with Martha and Kiki 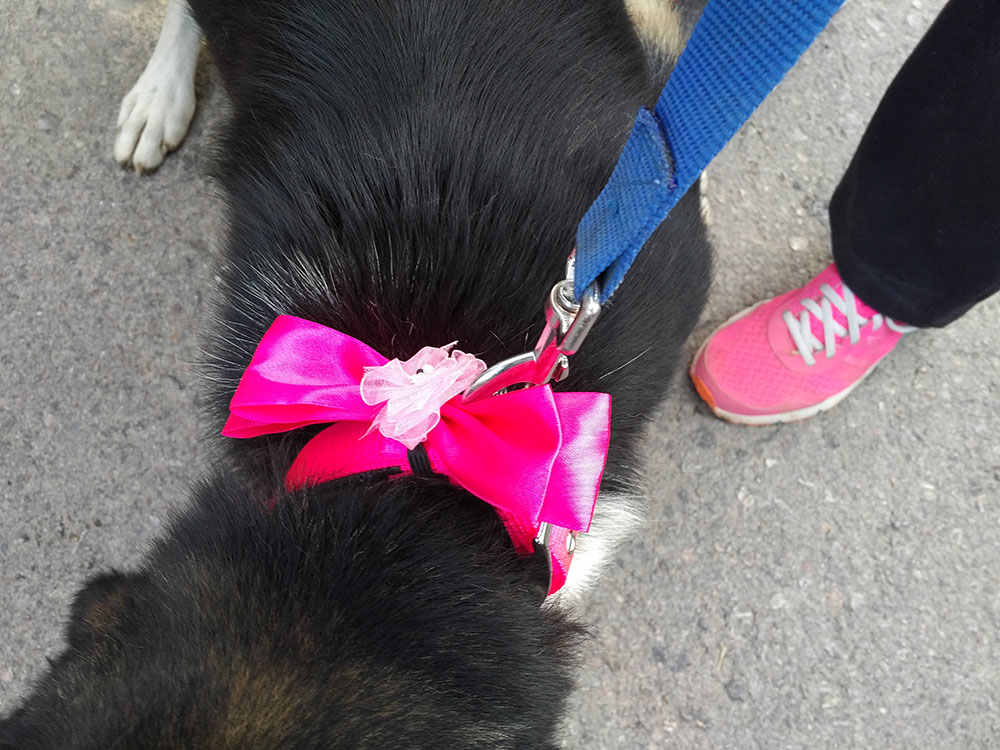 We would be thinking Martha had slipped up if a Filozoikos dog didn’t check in with a special farewell bow on its collar! 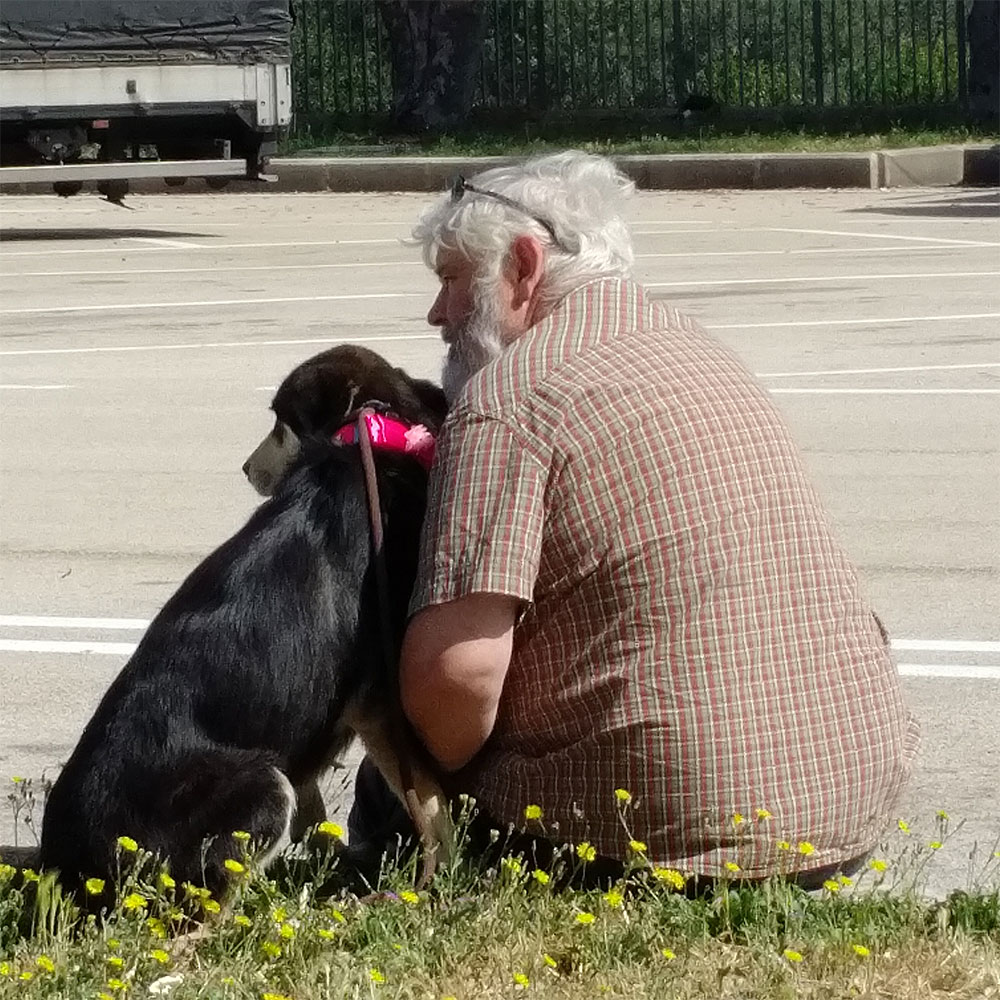 Sylvia is quite a shy girl, but very affectionate. Here’s courier M telling her a bit about life in the UK. 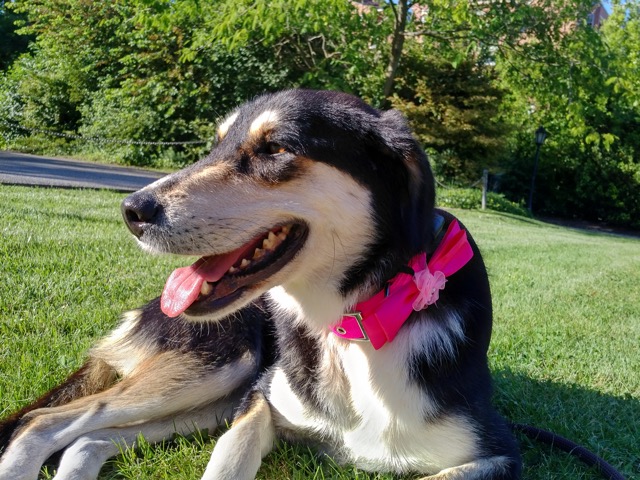 Lucky, a female ginger cat, was brought to us by Carol from Nine Lives Greece. Many of the cats rescued by Nine Lives are disabled, and Lucky is no exception, being partially sighted. So many stray cats struggle for the same sources of food and shelter that injured or sick ones often lose out as they simply can’t compete. These are the cats that Nine Lives takes in and tries to rehome. Aptly named Lucky is travelling with us to her new home in the UK. 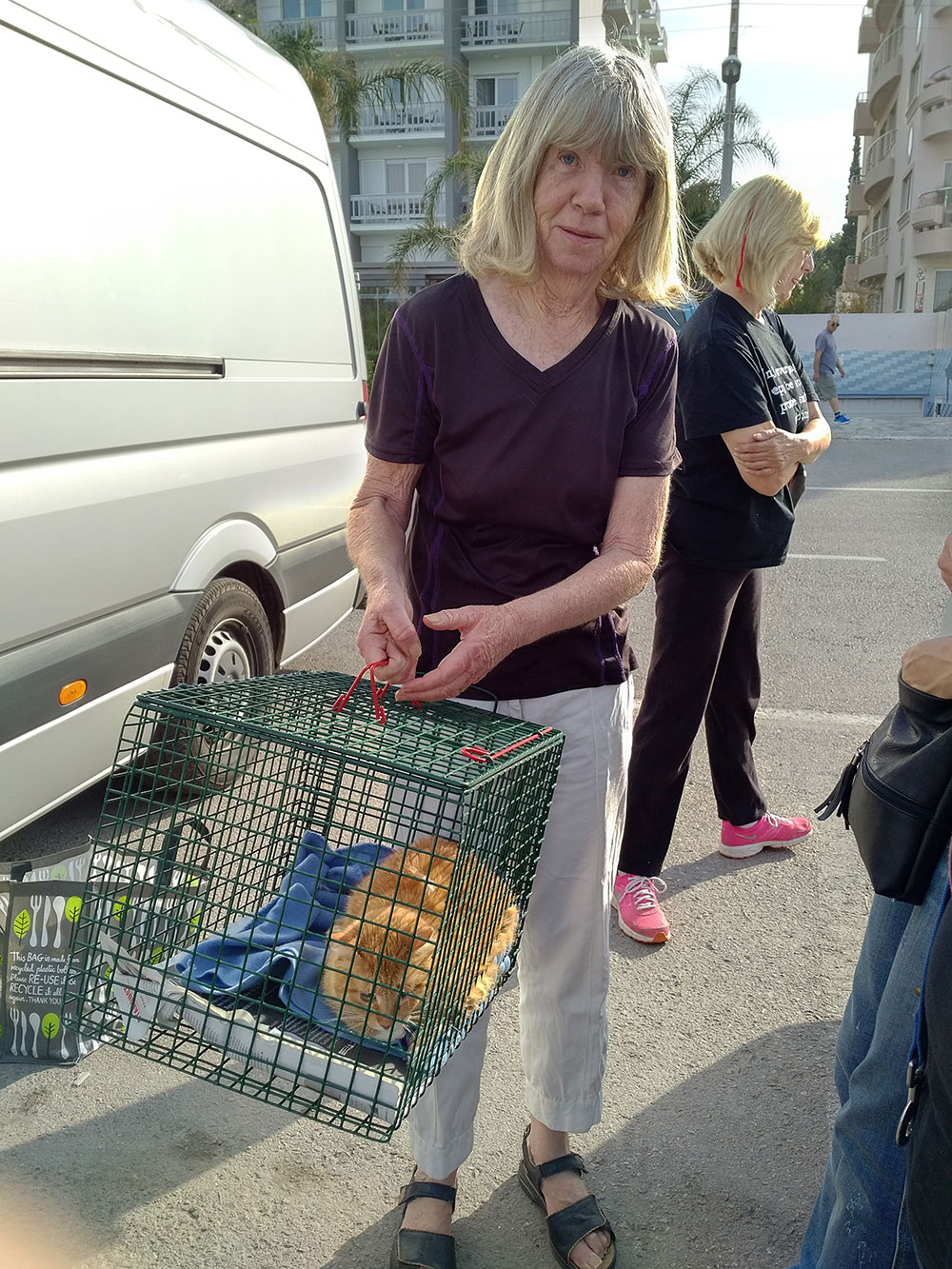 Carol, who delivered Lucky, is a board member at Nine Lives. She’s been involved in animal rescue for quite a while, having previously worked for Greek Animal Rescue in Athens. 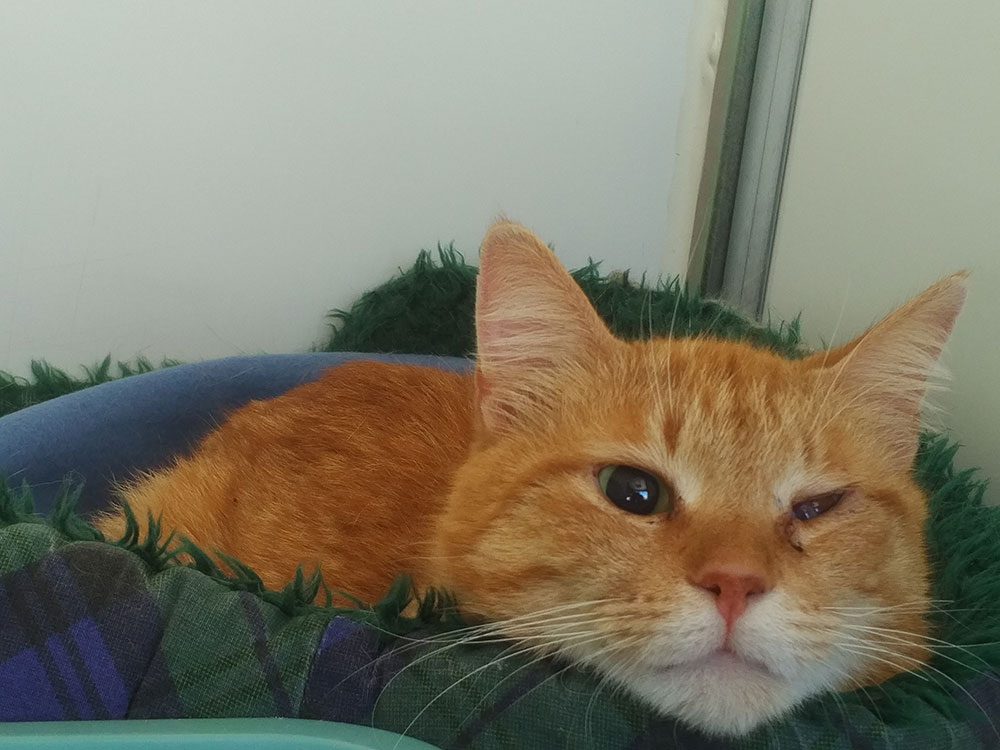 Darling young Lucky, chilling out for the trip

Christina came to meet us with Dimitra, a stray Pointer rescued from the Greek beaches. Dimitra is on her way to her new home near the Welsh beaches, where she’s been adopted by Ian and Alys. 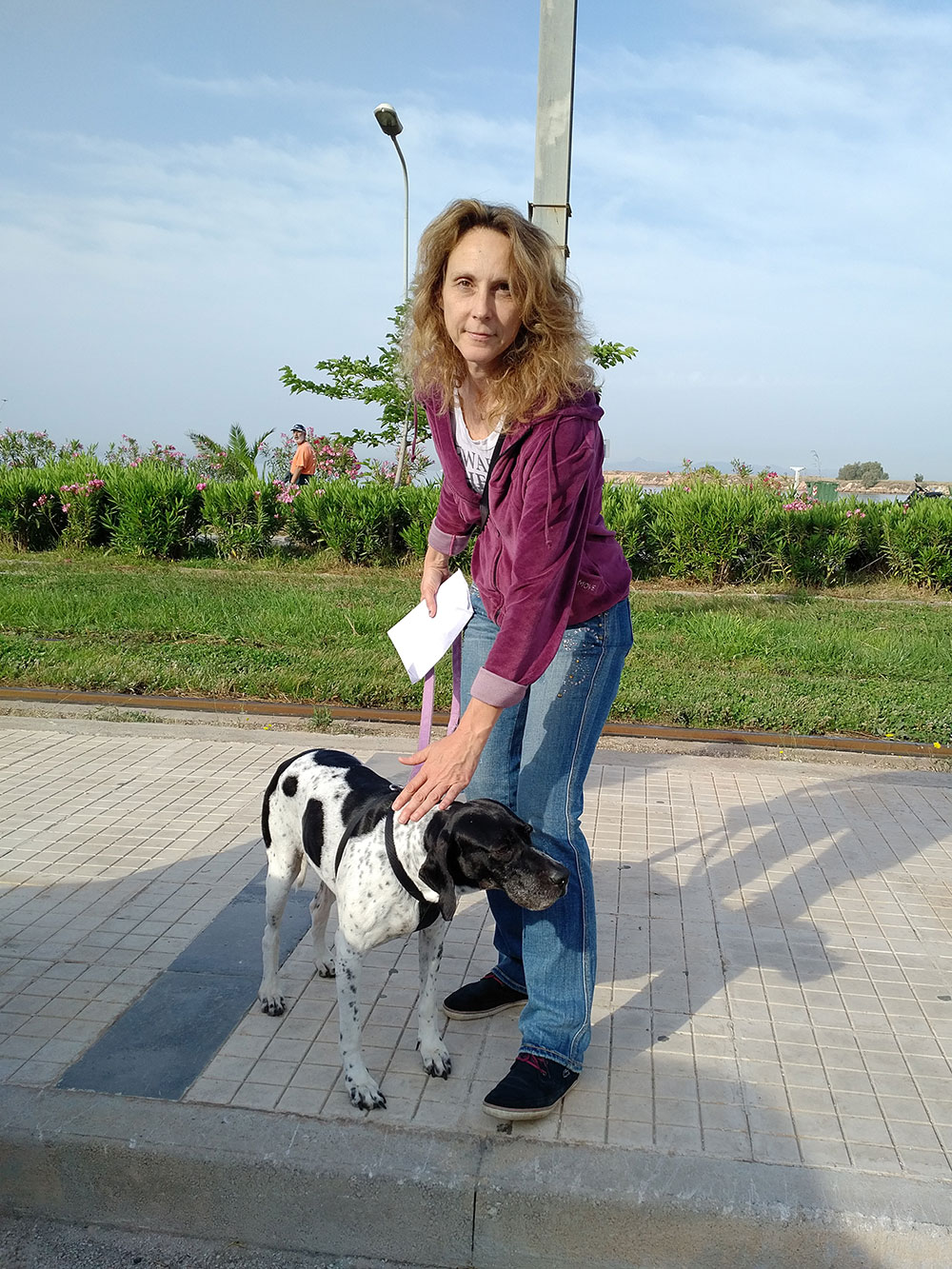 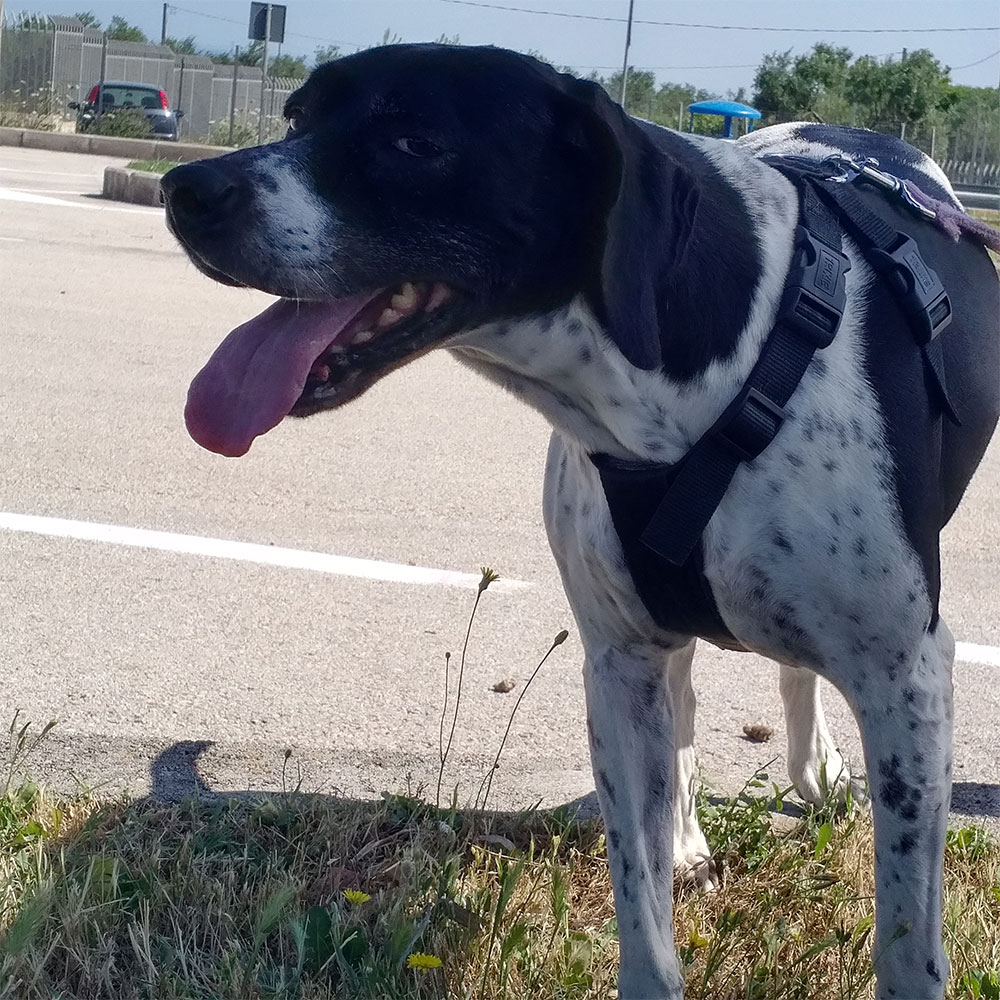 Dimitra walks well, wants to be your friend, and loves a cuddle and a biscuit! What more could you want?

Once the first set of passengers was on board, we headed to our second meeting point just of the A90. New road systems confused our poor satnav, so everyone was kept waiting a little longer than planned — but we were greeted with kindness and patience.

Kerry drove up from Preveza with German Shepherd Dog Moggie and Ozzie the cat (named after Ozzie Osbourne). Kerry is returning to the Essex area to be closer to her family. 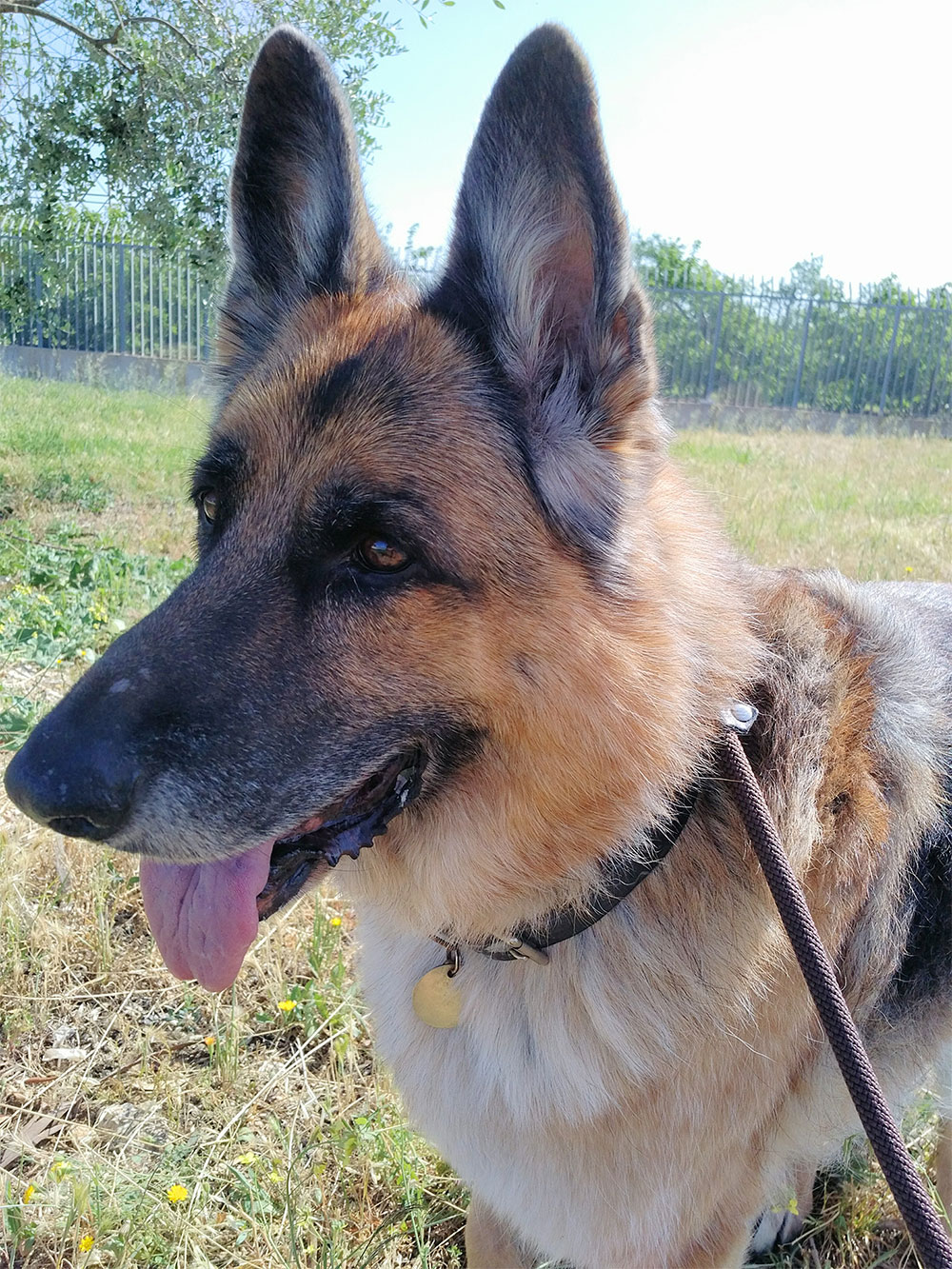 Moggie has such a sweet face 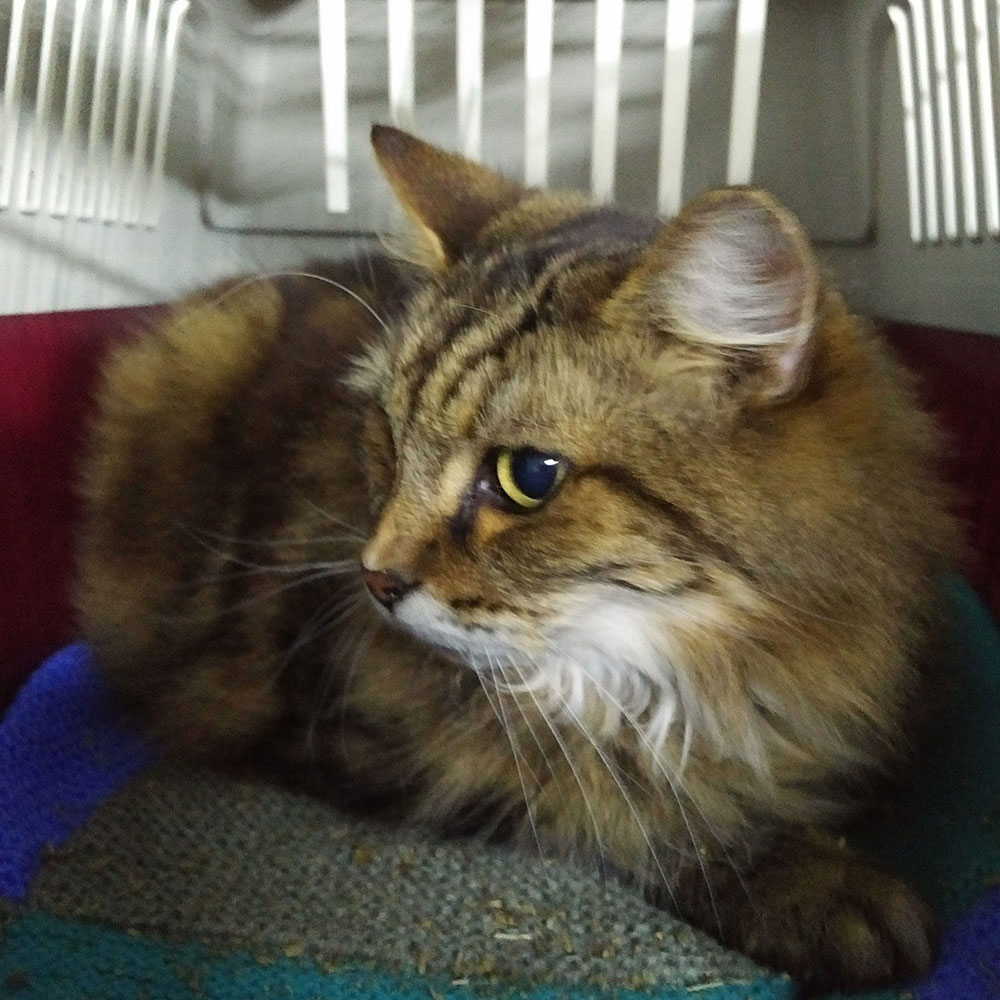 We think the feline Ozzie is rather better looking than his namesake!

Sara arrived with her rescue dog Kookie. Sara is relocating to Wales, and Kookie is travelling with us to join her there. 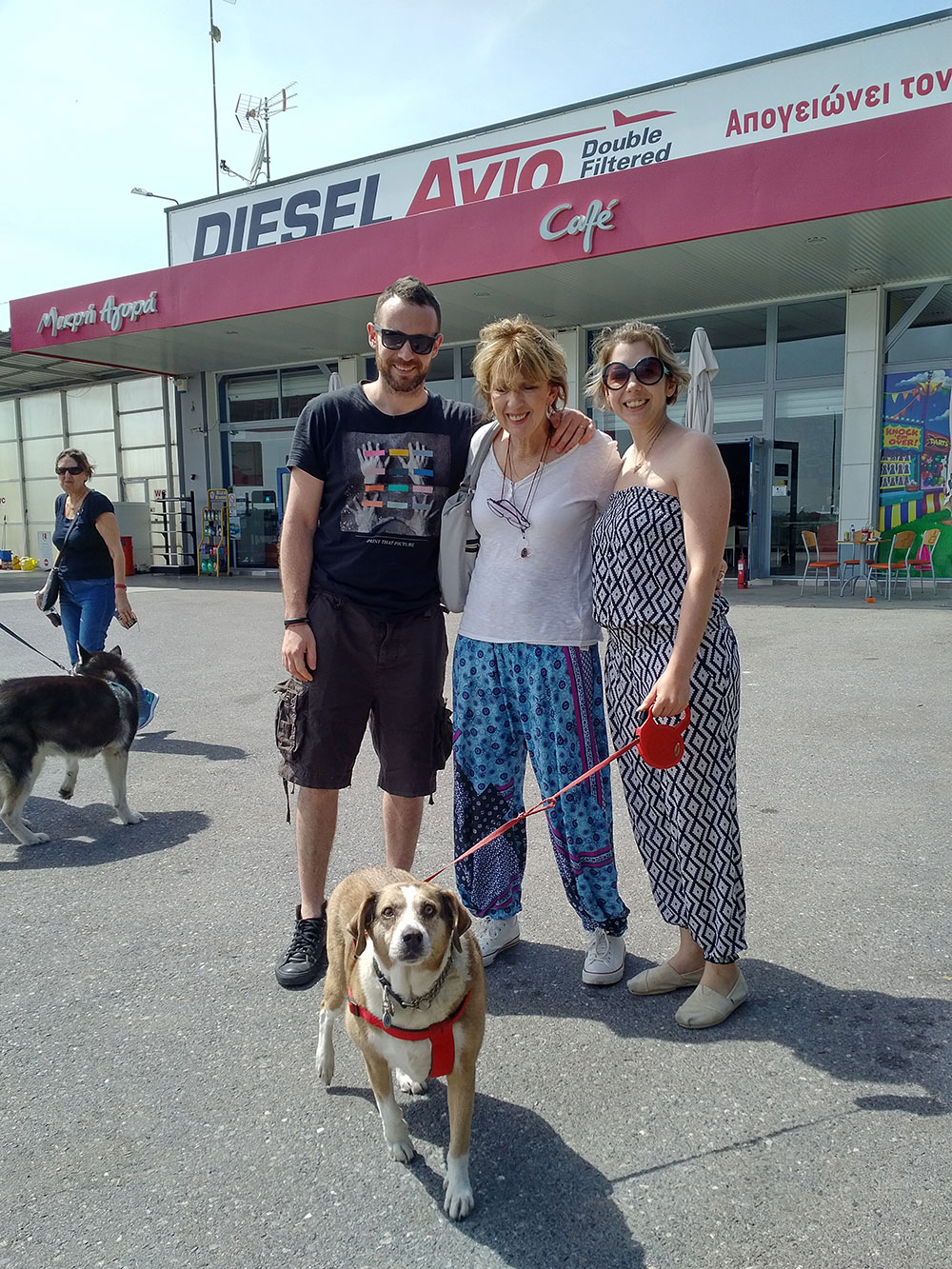 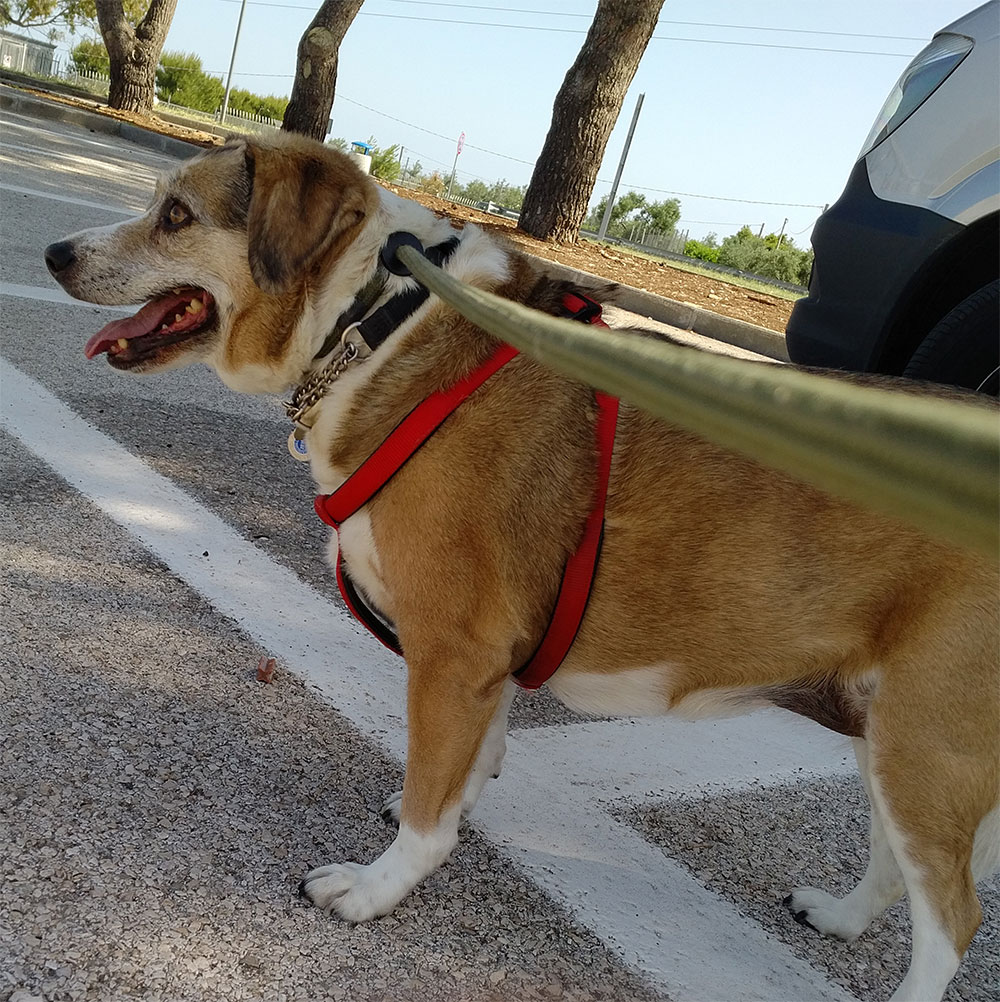 Kookie out walking, checking the passing cars for her family. Don’t worry Kookie, not long now til you’re reunited with Sara!

Eric was waiting with his grandparents to join the trip. He belongs to Eleni, who’s moved to the UK for work. She took her smaller dog with her, but had to wait until she had suitable accommodation for Husky Eric to join her. 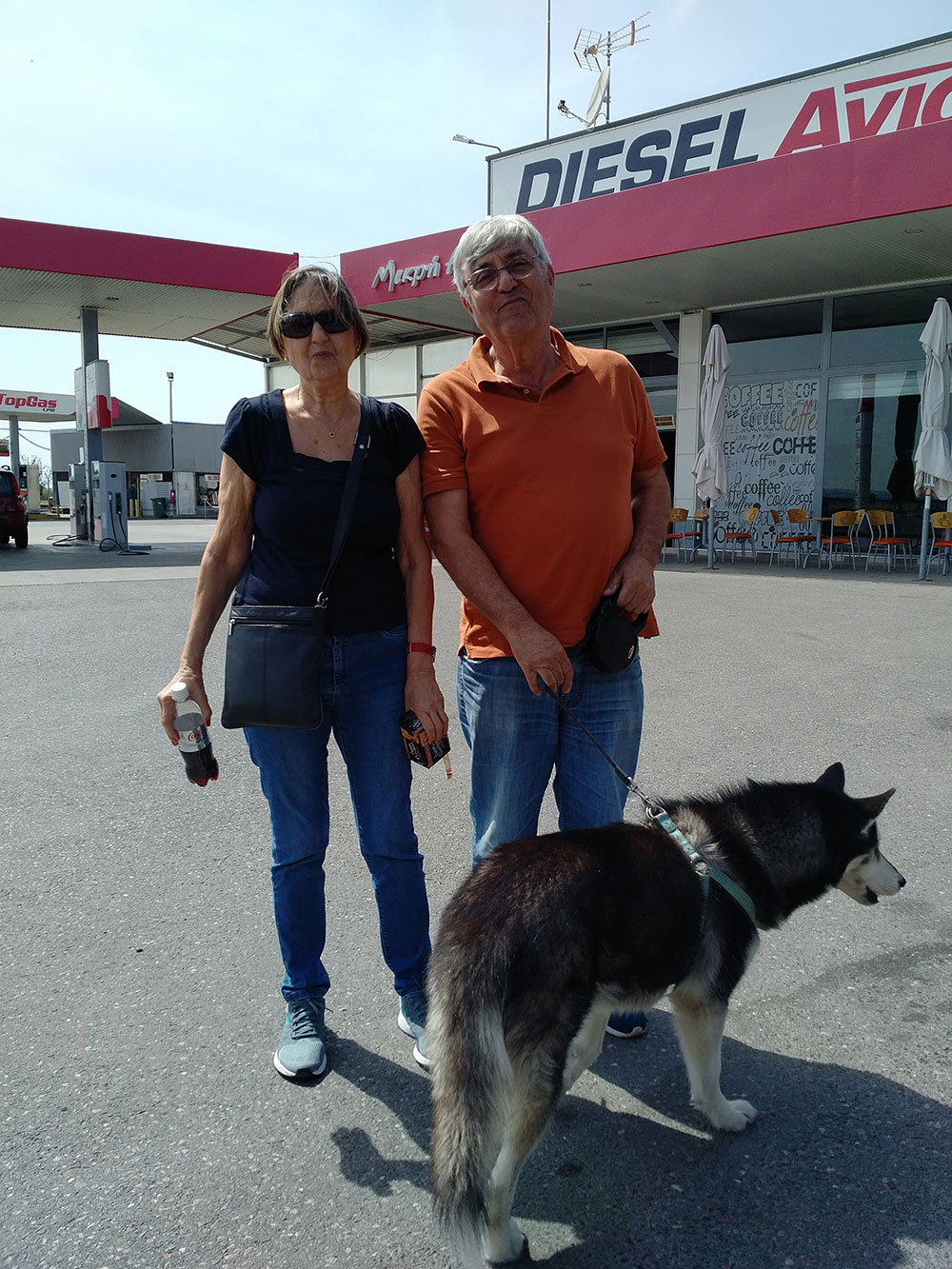 Eric has been in the loving care of Eleni’s parents 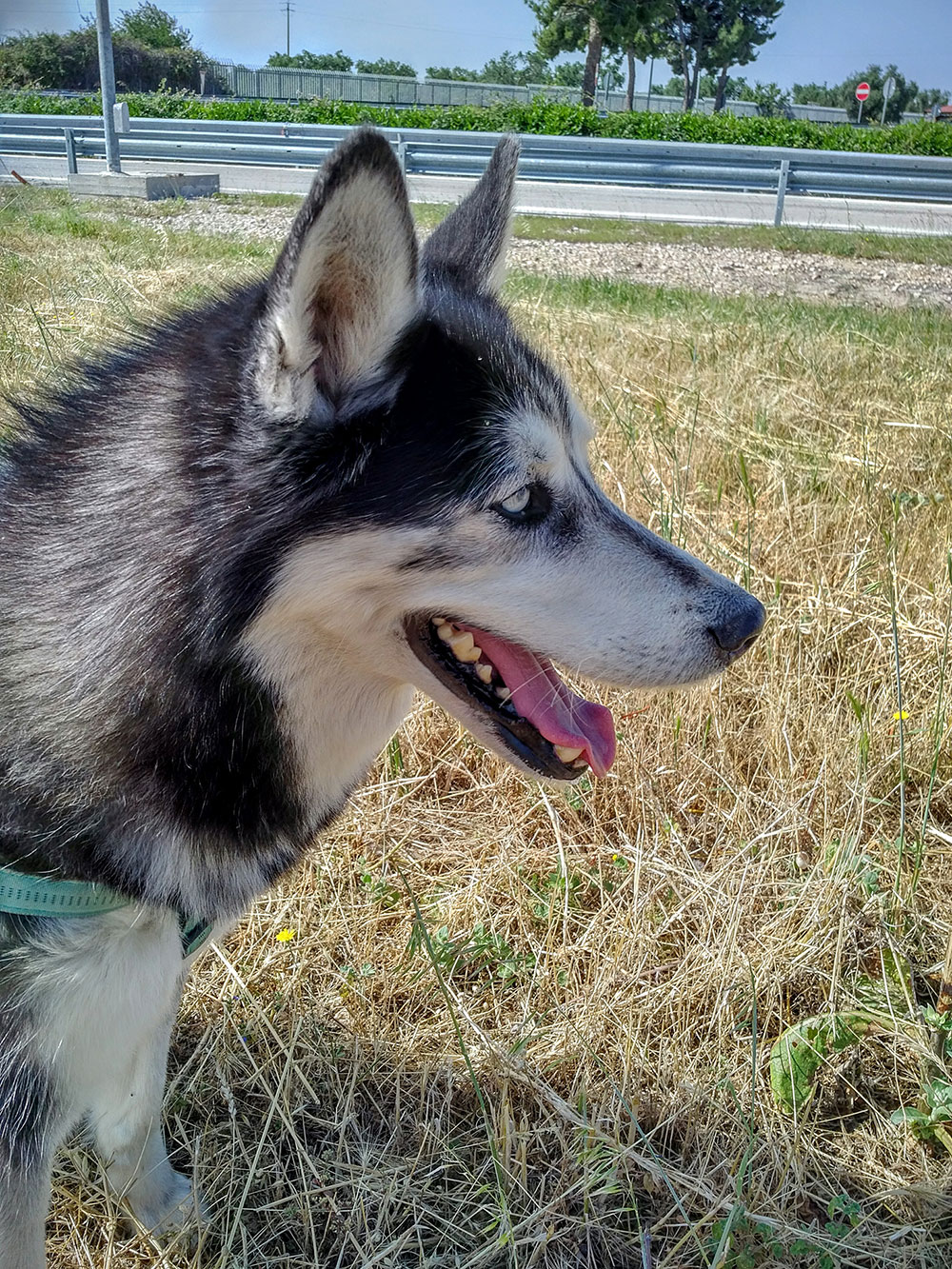 A closer look at gorgeous Eric

…a couple of critters spotted at Igoumenitsa who aren’t travelling with us: 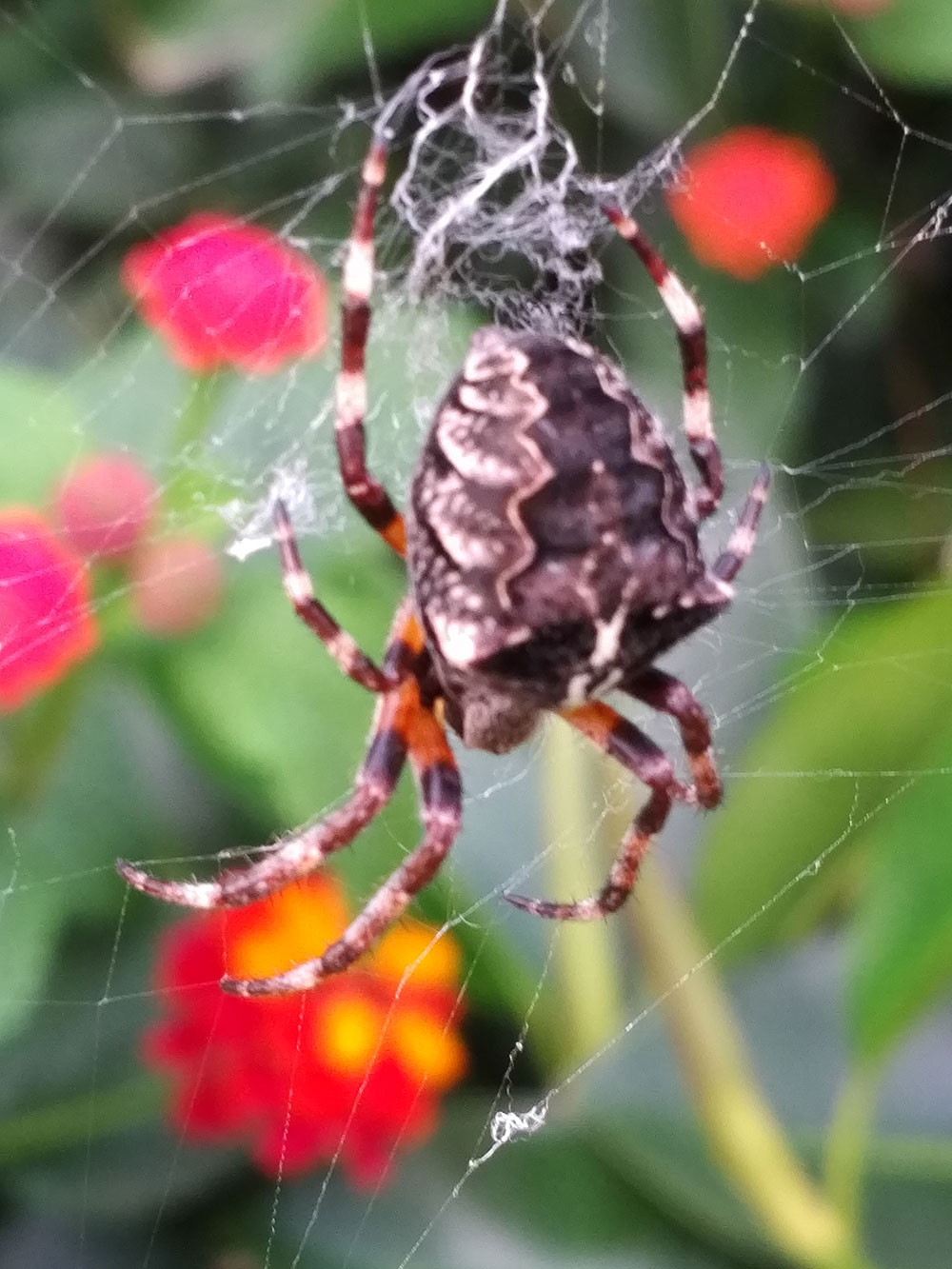 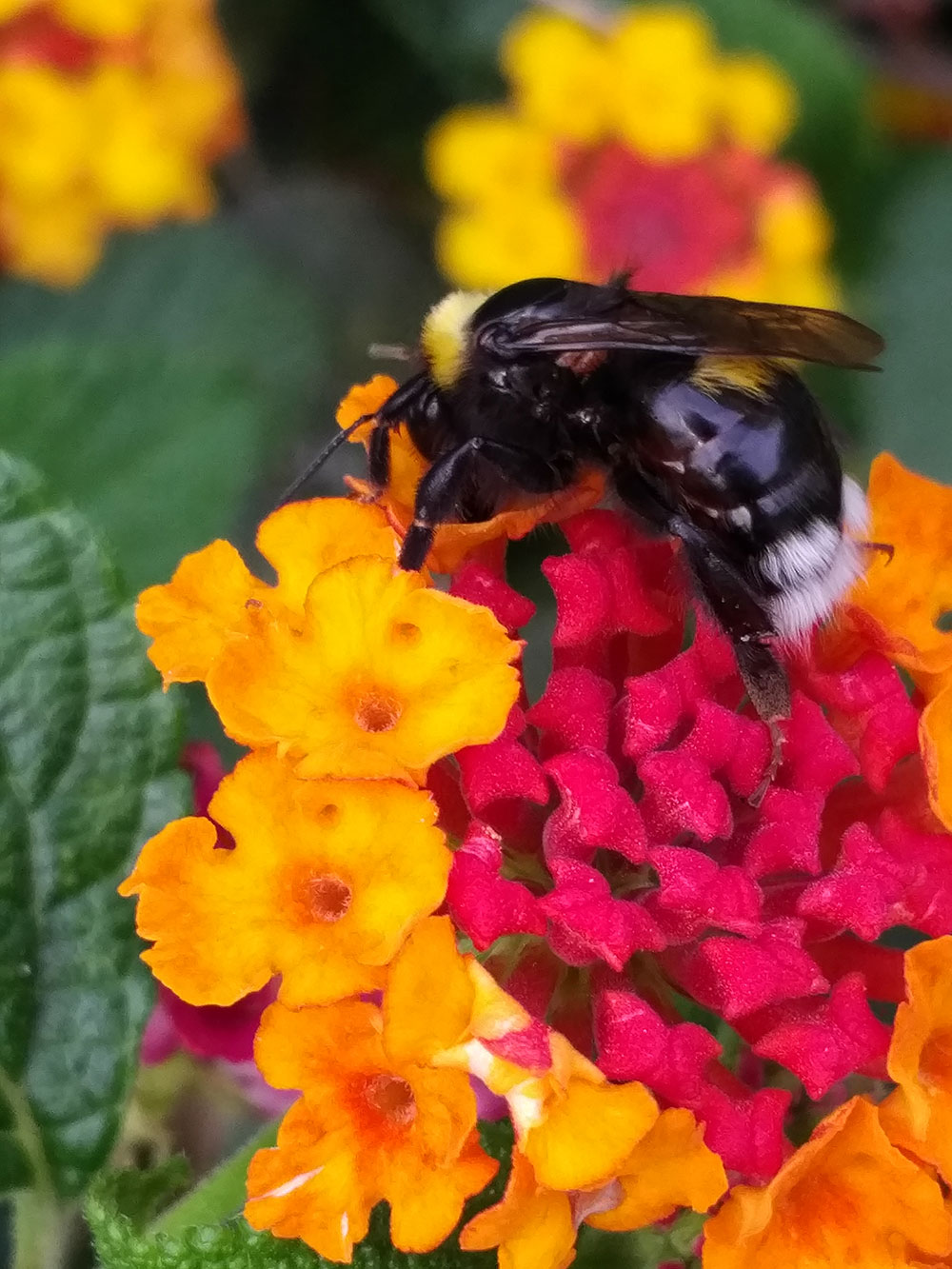