Animalcouriers recently set off on our first road trip of 2016, to bring pets from Greece to the UK. The weather in Athens has been so warm and sunny, it’s hard to believe it’s January. We received equally warm and sunny greetings from everyone who came to wave pets off on their way.

Colonies of cats live all around Athens, some of whom are lucky enough to be fed and cared for by local charities, volunteer groups and kindly individuals. 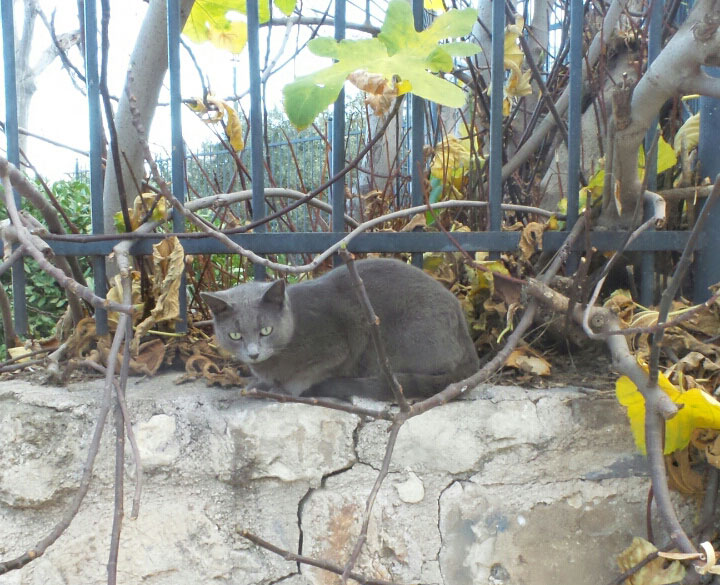 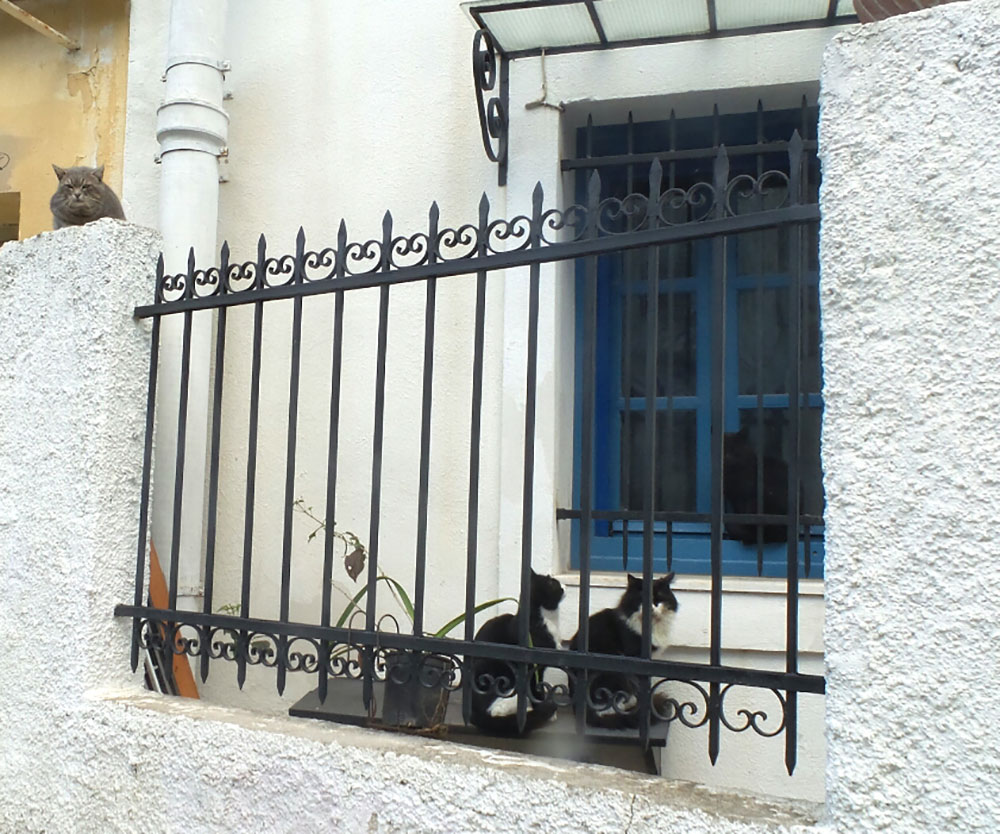 Perhaps the householder feeds this little group — they certainly look like they know it’s worth hanging around! 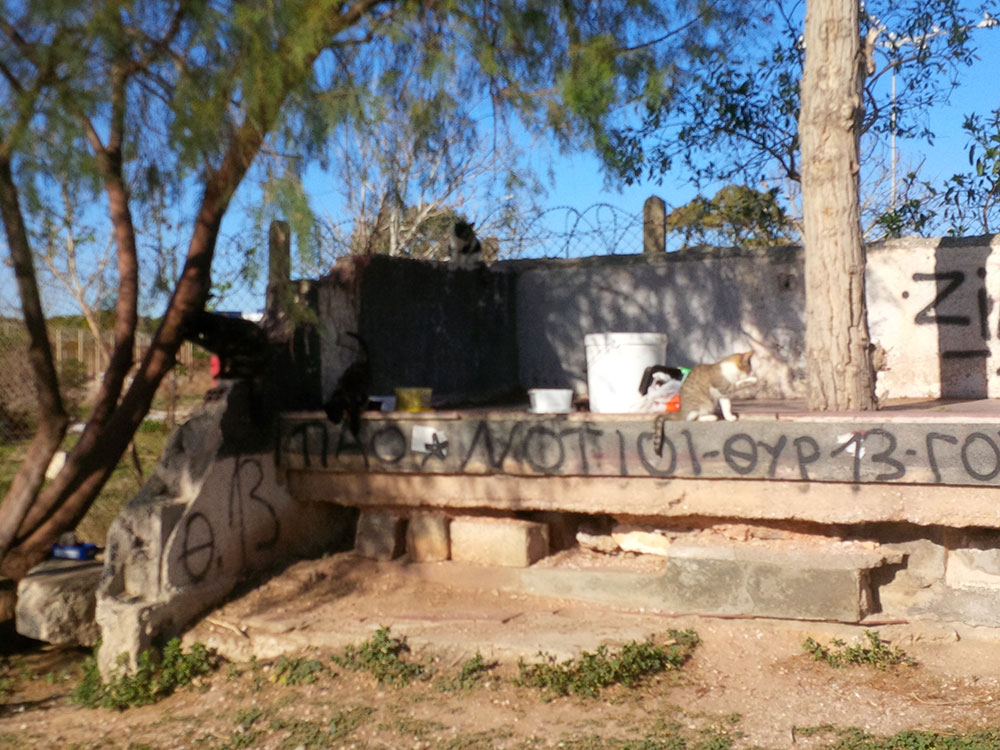 This group, near our hotel, seen licking their paws after snacking on whitebait, delivered by someone who clearly brings them a fishy breakfast every day

Stunning white cat Hooper belongs to Suzanne who lives in Edinburgh. Sonia, who’s been fostering Hooper until it was time to travel brought him to us accompanied by our old friend Cordelia.

Hooper is quite a character cat. He’s travelling in the bedroom just behind the driver’s cab, and keeps poking a paw round the side to remind us he’s there! 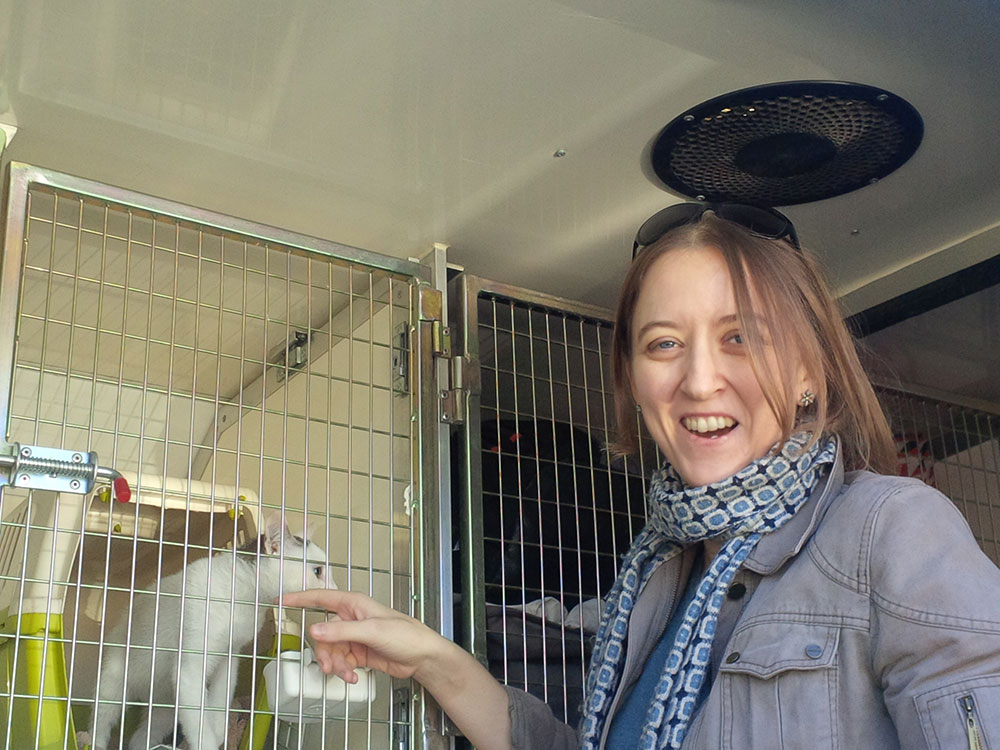 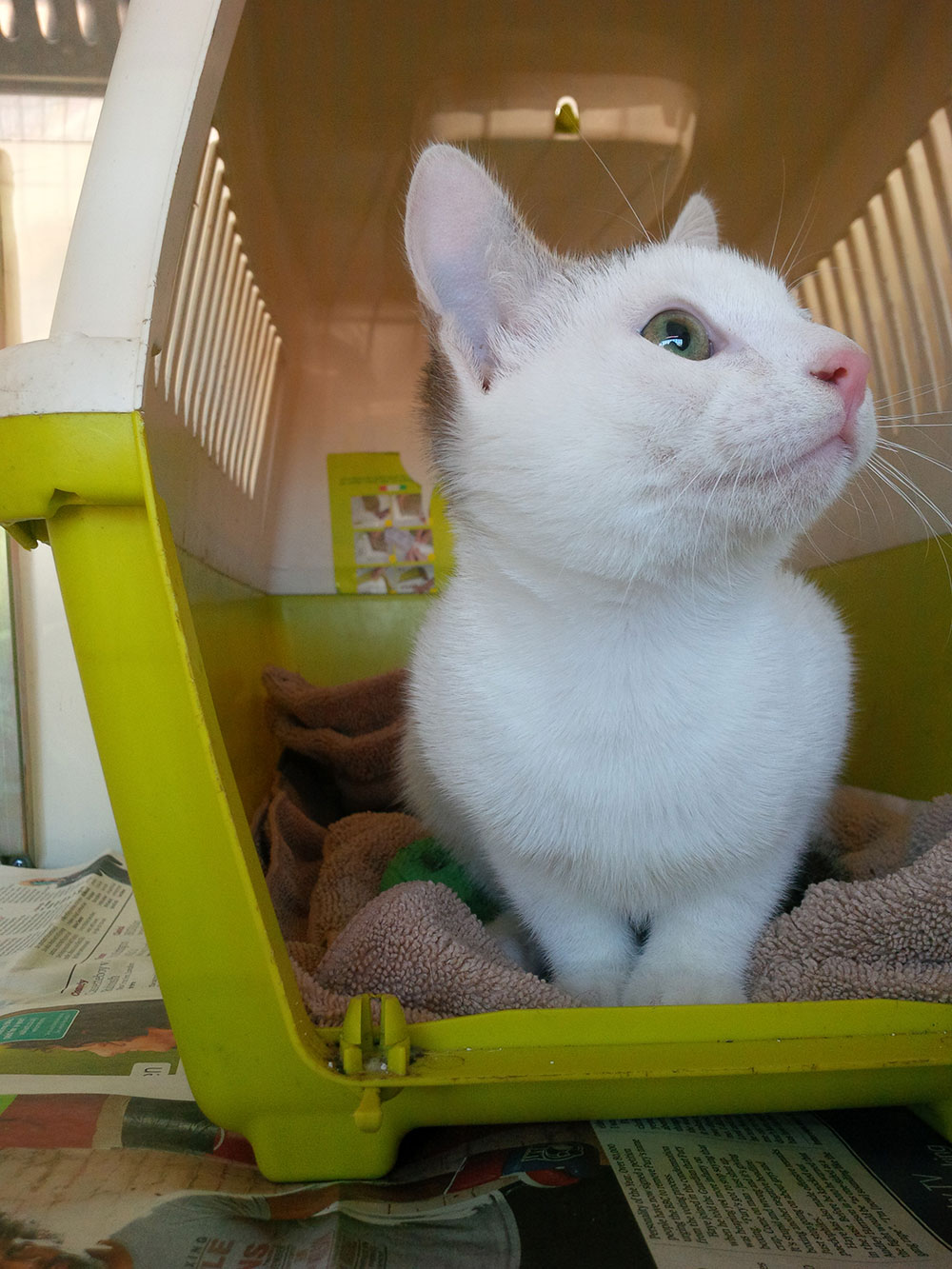 A closer look at handsome Hooper

Cute Griffon Jerry belongs to Katerina, who’s moved to Southend on Sea to ‎work with her partner. Themistokis and another friend delivered Jerry for his journey. Katerina is very excited that Jerry is on his way to join her. 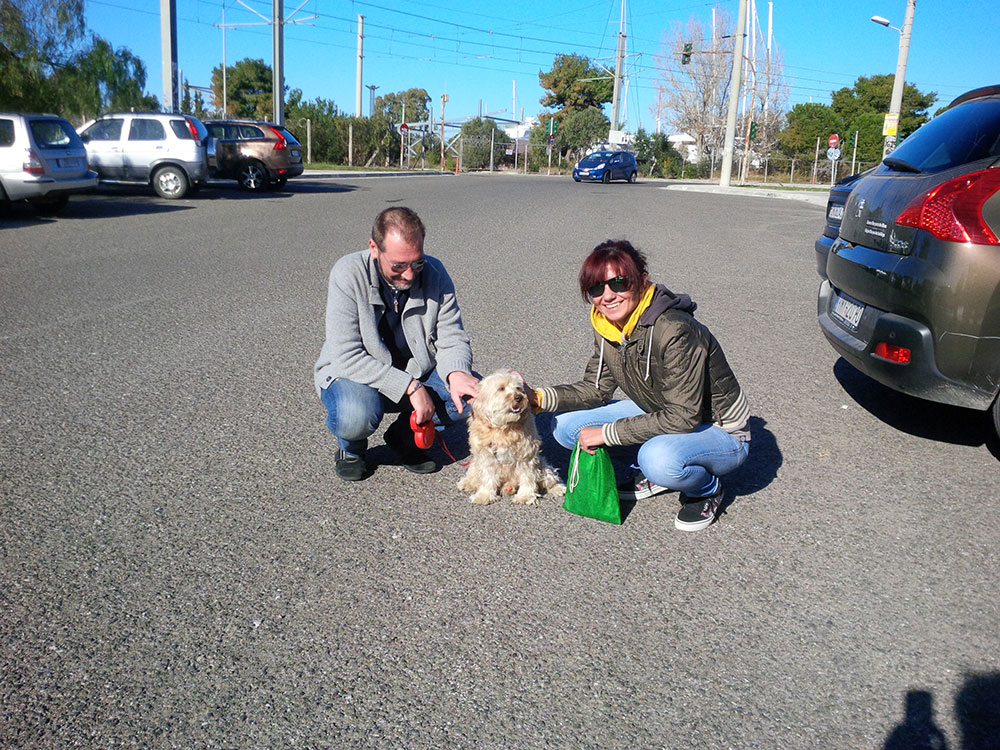 Jerry arrives in the Athenian sunshine 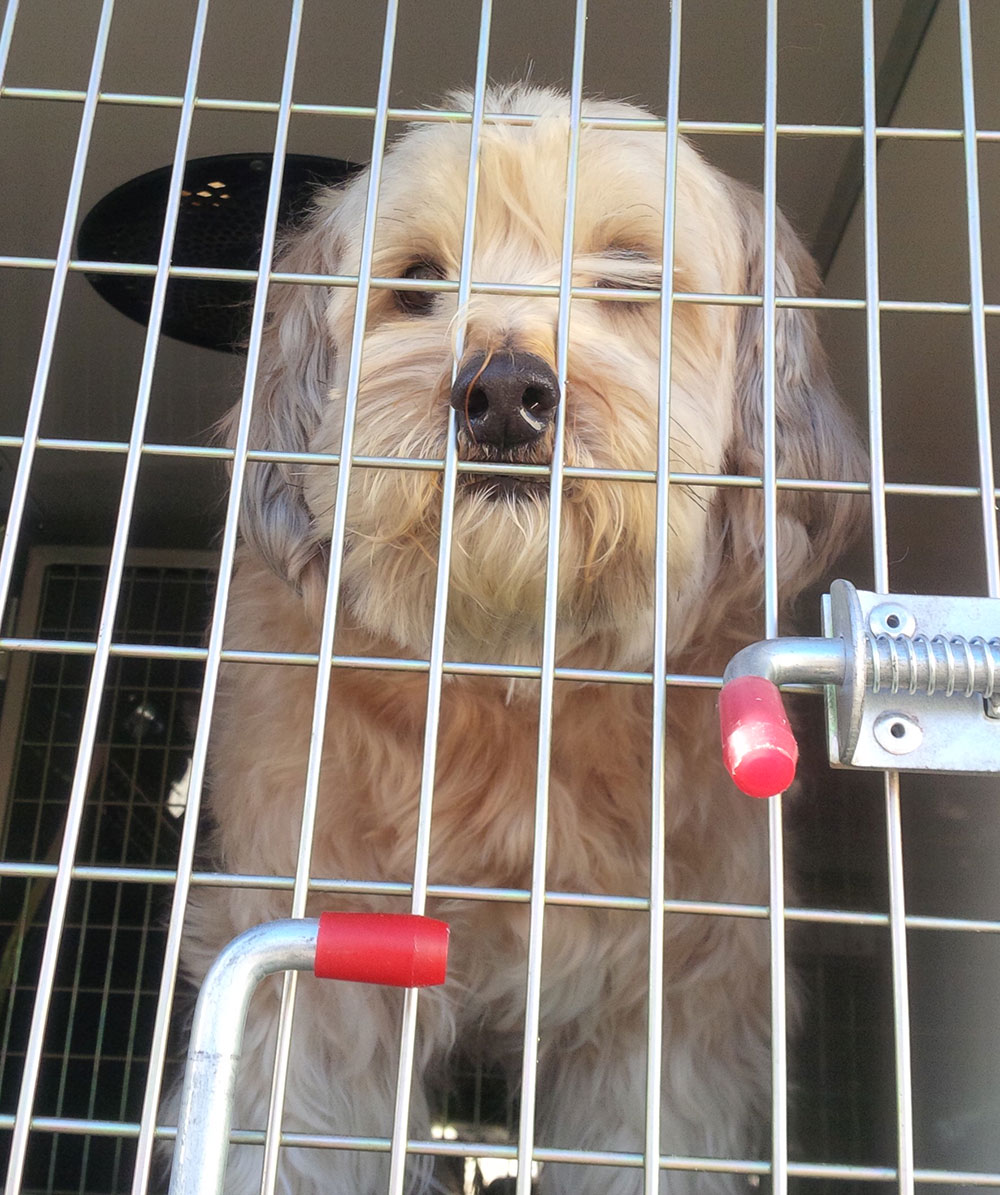 Jerry pressing his nose through the bars on his bedroom door, hoping it’s his turn next for a walk

Calle, a very pretty Husky cross, was brought to us by Angus. He flew in from London to Athens to see her on her way. Calle has been living with Angus’s mother-in-law, Sheila, who was rather sad to see lovely Calle go. 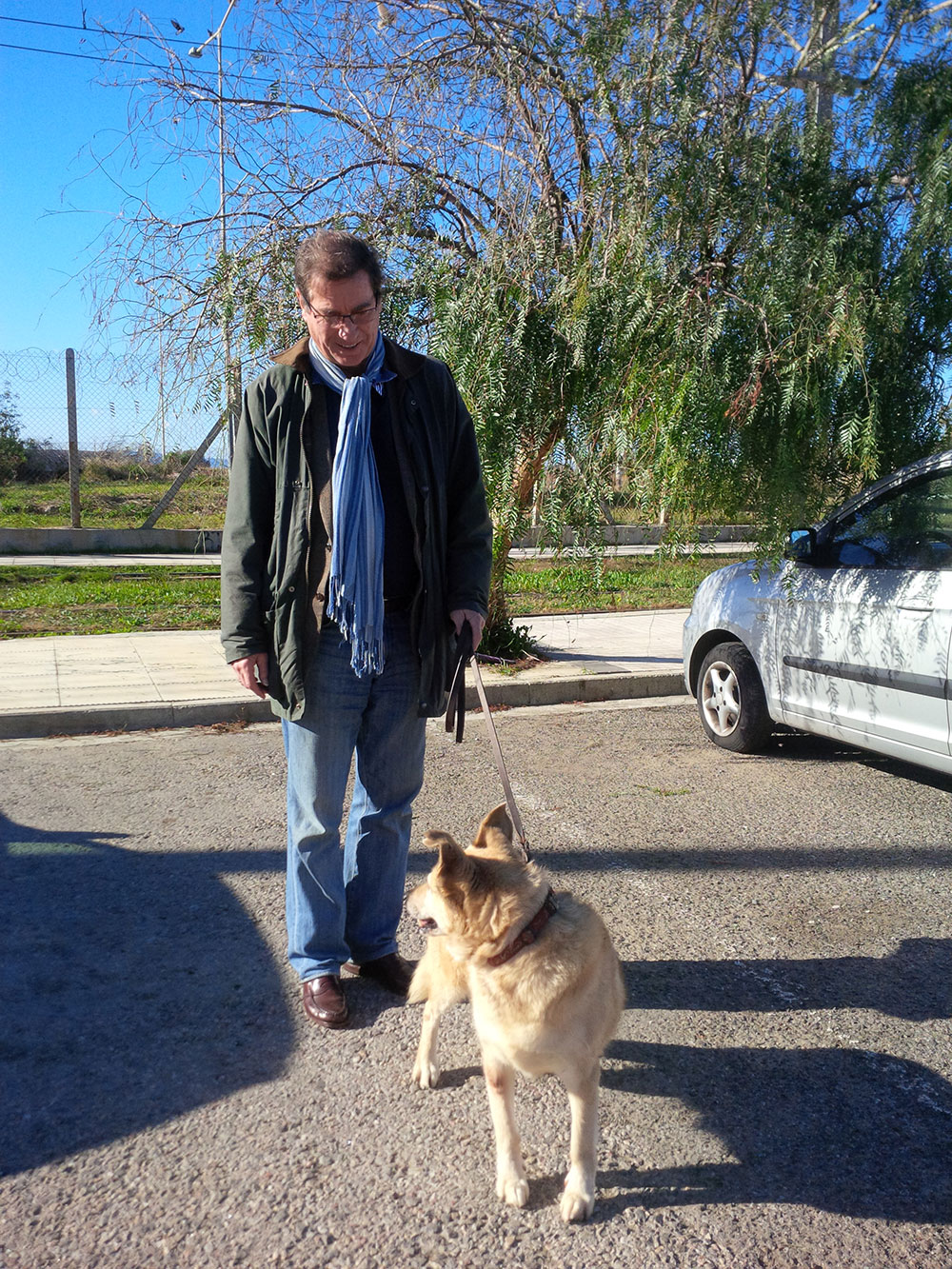 Angus with his dog Calle 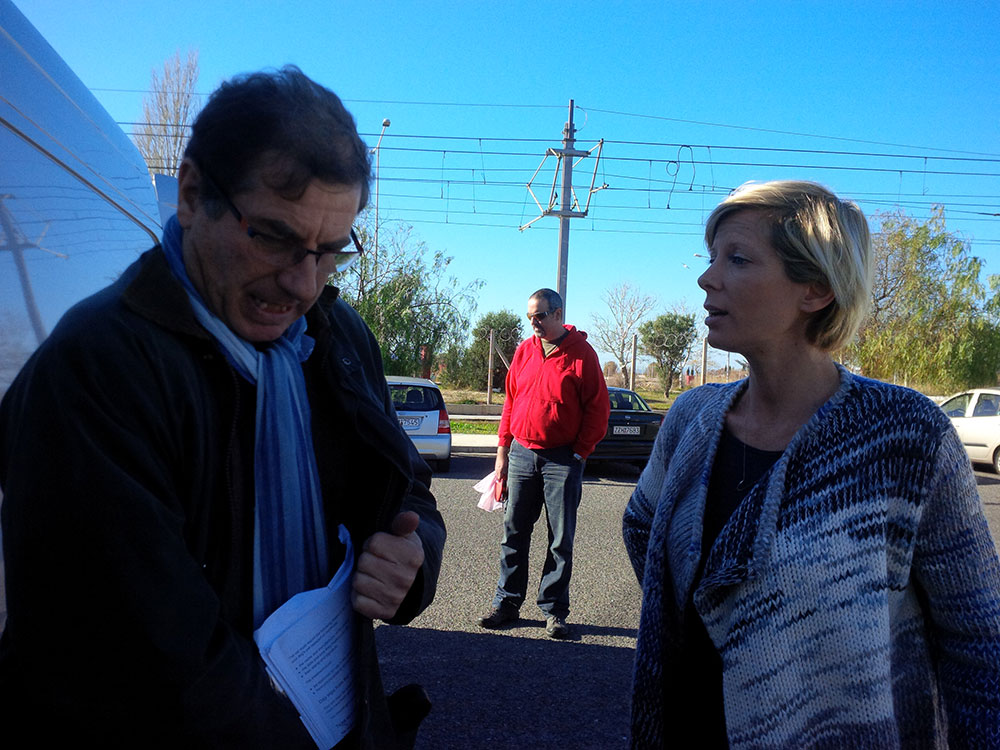 It turns out that Angus and Cordelia know each other, so they took the opportunity to have a catch-up chat by the side of our van

Gorgeous Rottweiler Djibril belongs to Panos. He relocated to London a year ago, and at last Djibril can join him. Panos’s dad, Konstantinos, arrived early with Djibril, so we took him for a walk on the beach to get to know him a bit better. 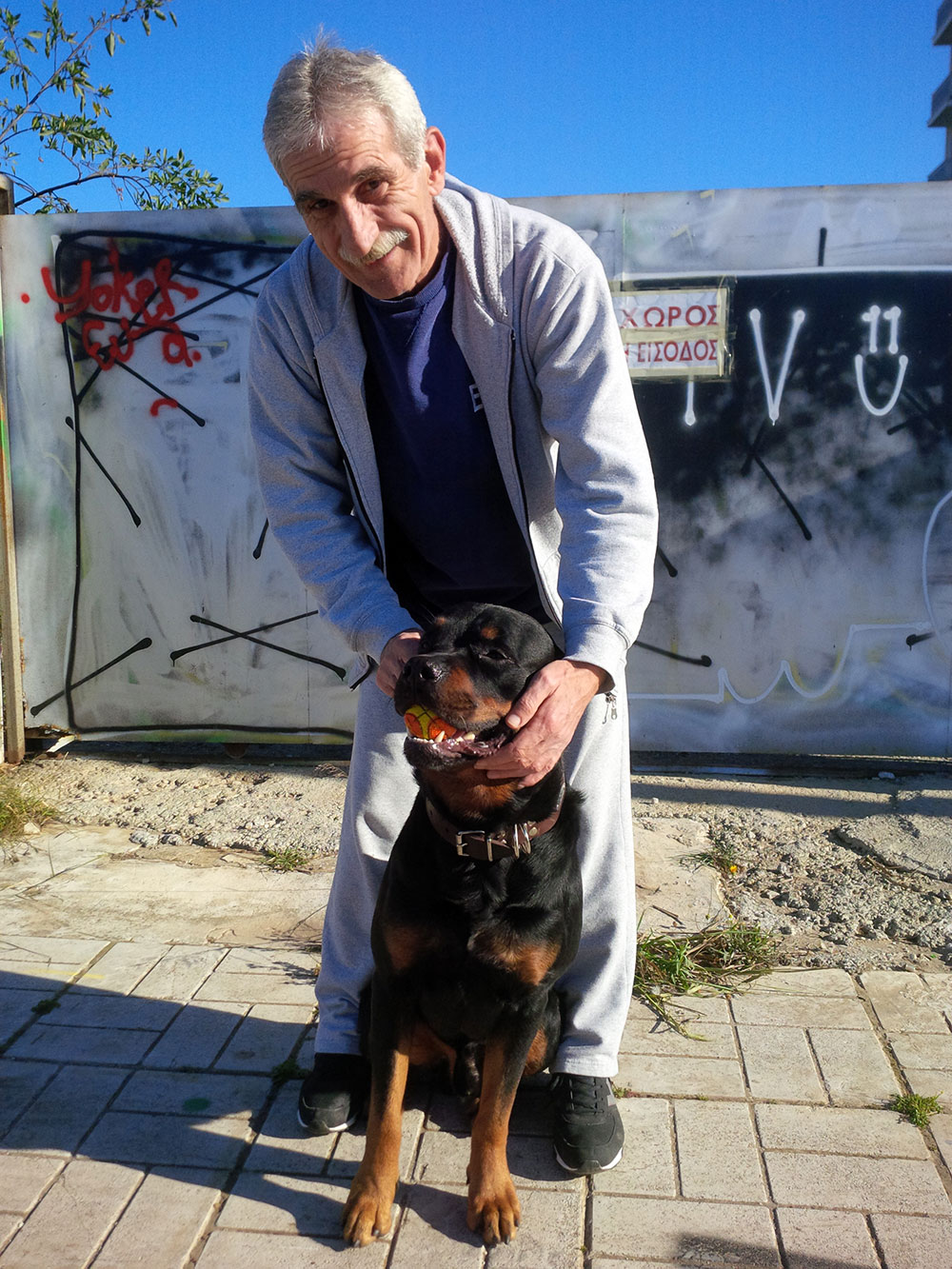 Konstantinos with Djibril (and a ball) 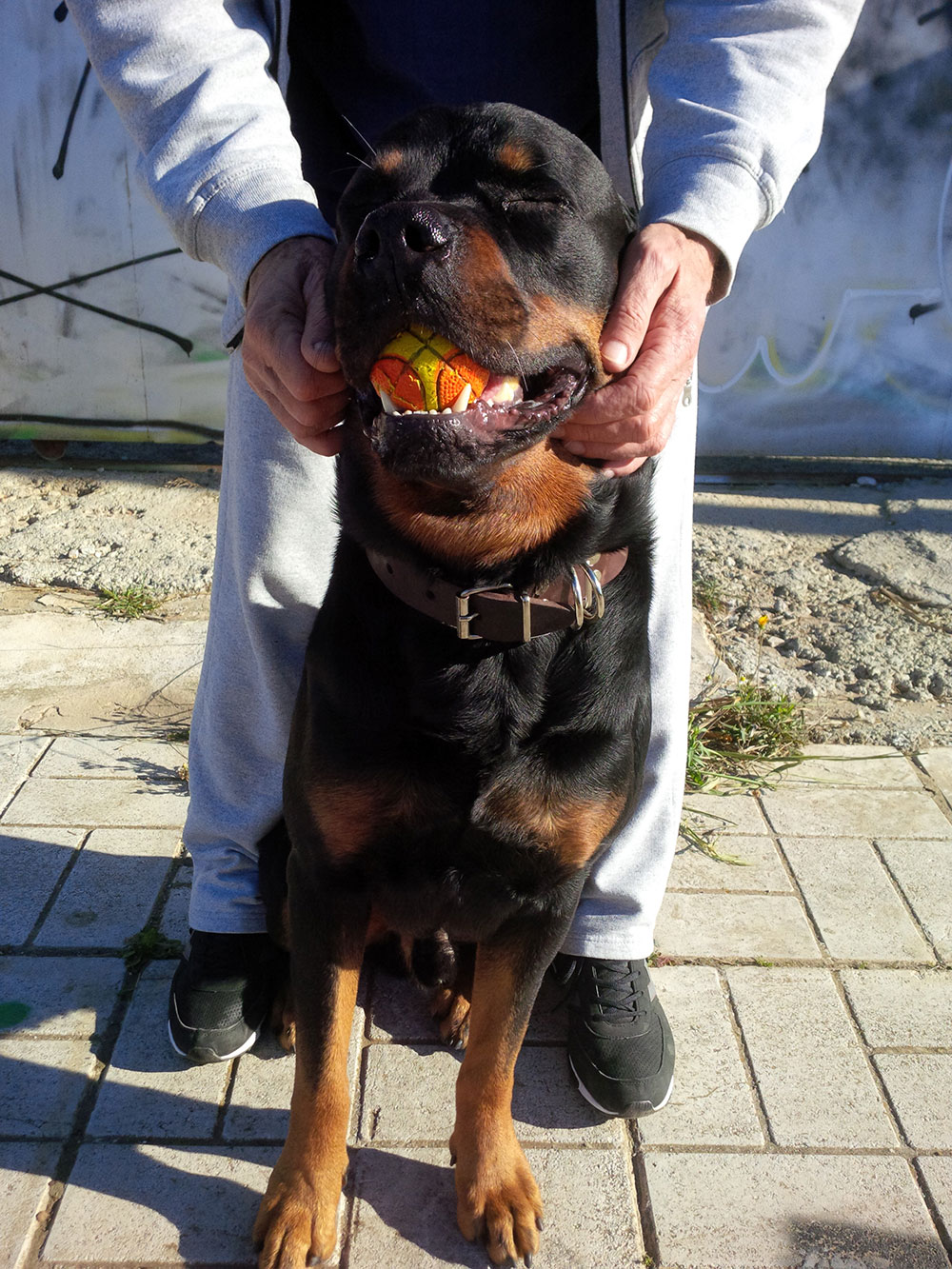 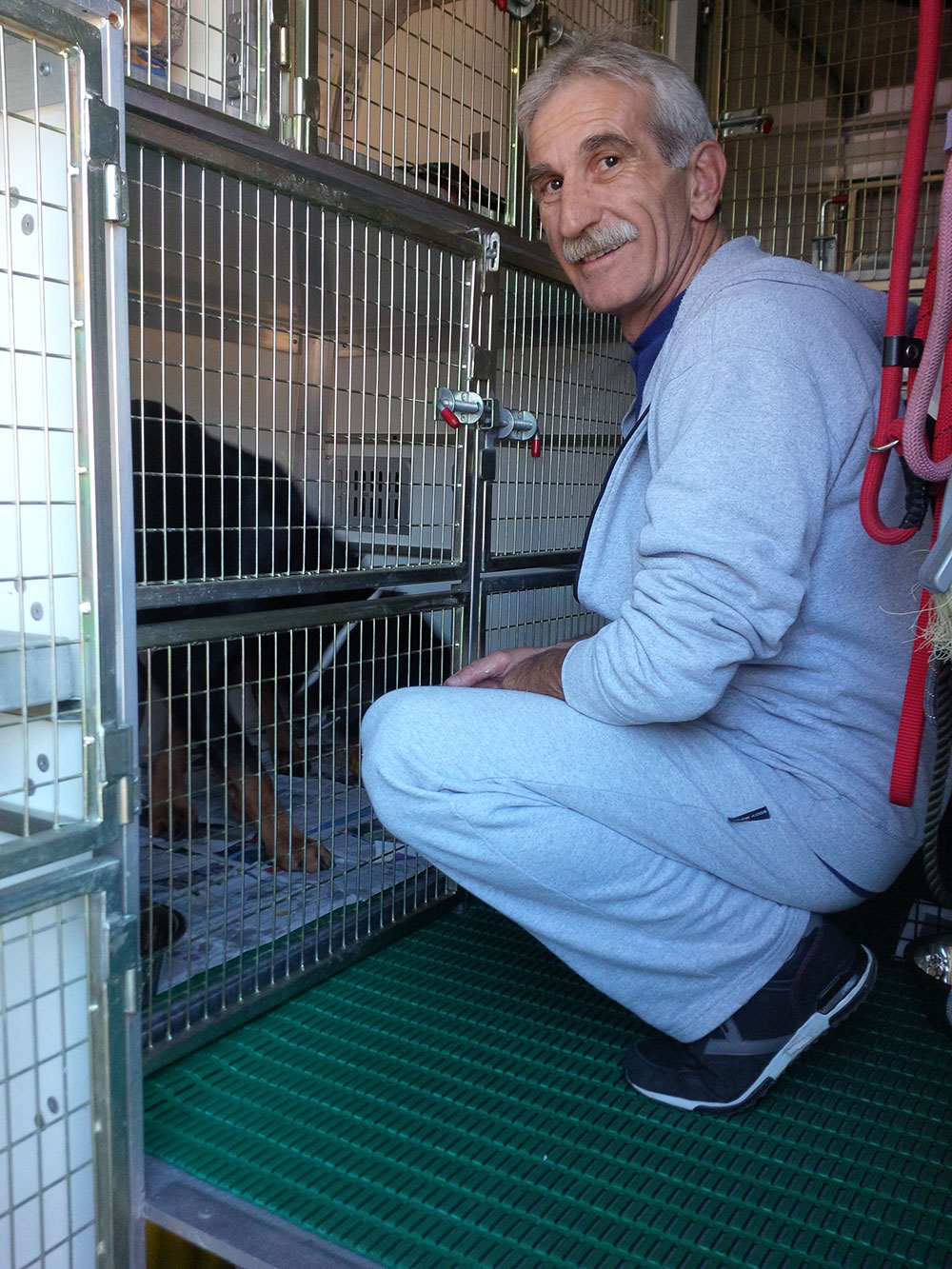 Evdoxia and her husband Terry brought their dog Mirsa to join our trip. This adorable girl is a traditional Greek shepherd dog, and has all the best traits of the breed. She’s big, soft and gentle, loves to play with cats, and is happy to eat any kind of food. (In fact, Evi and Terry warned us she’ll eat anything!). The family is moving to London for work. 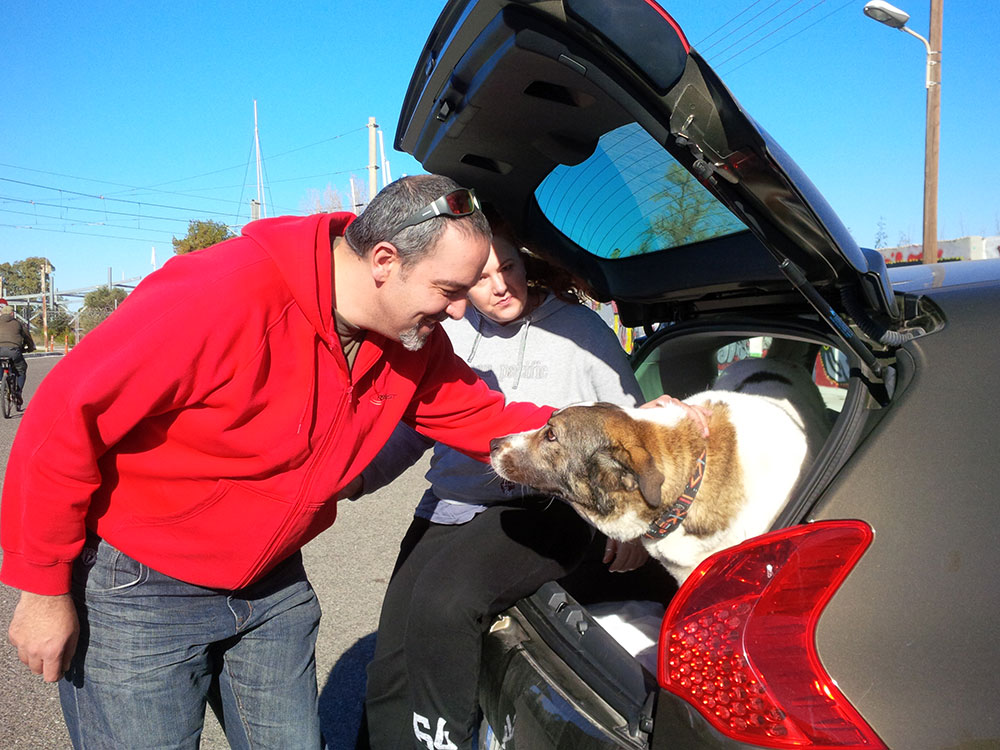 Terry and Evi arriving with Mirsa 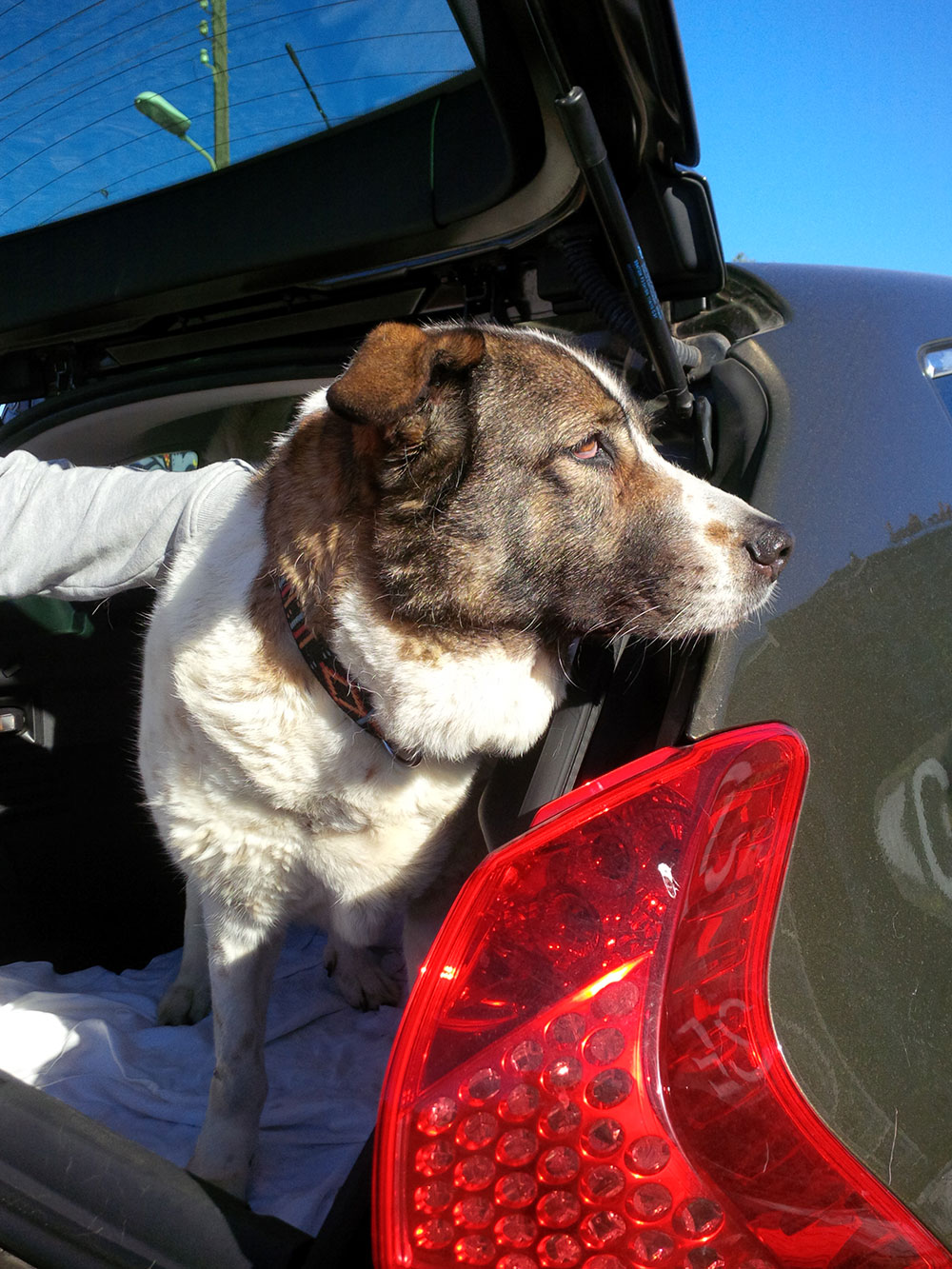 Mirsa really is a big softie

Bonnie — who is looking for her forever home

Bonnie’s journey started in Lesvos — she had a short flight to Athens where Akis (pet taxi) collected her and delivered her to us in Glyfada. Bonnie was found last year by Rebecca from Lesvos Stray Dog and Cat Adoptions.

Animalcouriers is sponsoring Bonnie’s trip to the UK as we had a spare space. Wendy, who fostered the four pups and Lucy after our last trip, will also foster Bonnie until she finds her forever home.

Bonnie walks calmly on a lead, relating well to the person she’s with. She’s less than two years old, around 65cm tall, affectionate, waggy-tailed, soft and gentle. She doesn’t like loud noises or being barked at by other dogs, but she’s playful and curious and loves to have a sniff around when she’s out on a walk.

If you or anyone you know is interested in adopting Bonnie, please email lesvosstraydogcatadoptions@gmail.com or Wendy Loytier. 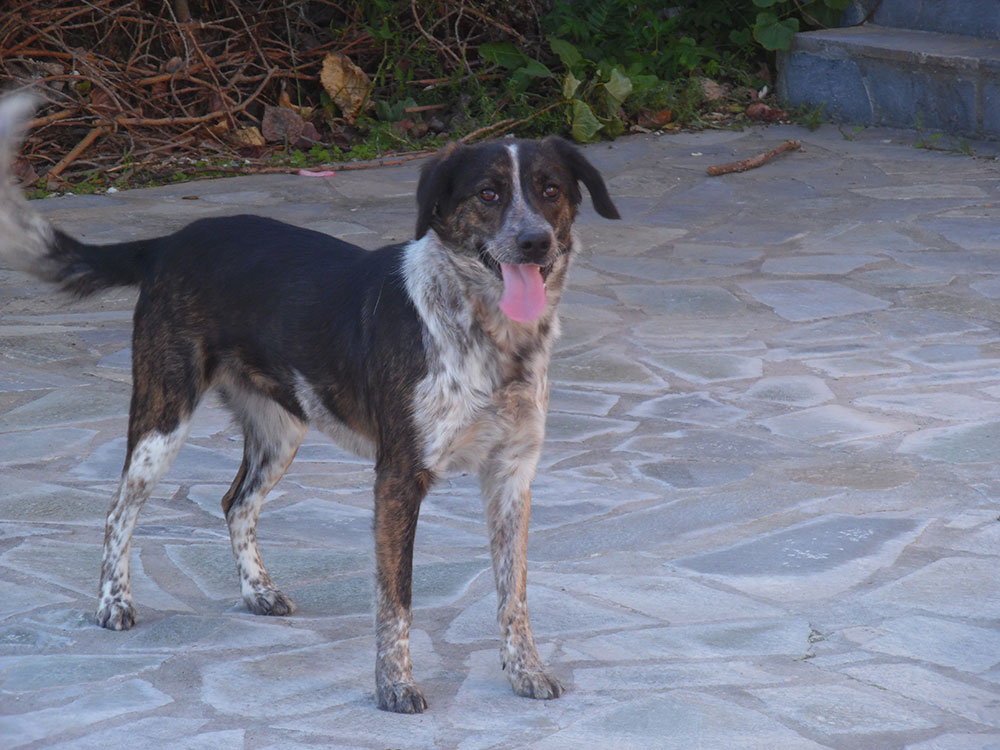 Gentle Bonnie photographed last year after being taken off the streets 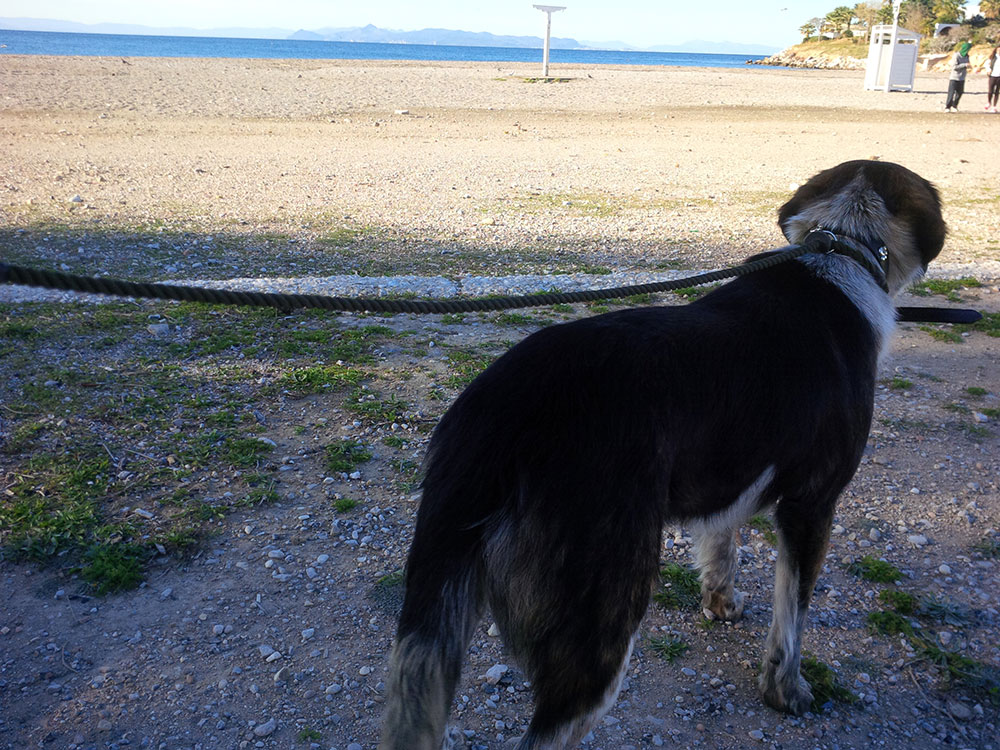 Bonnie out walking this morning

We met Blacky at the car ferry area of the Rio-Antirrio bridge. This sweet fellow belongs to Eleni, who’s gone on ahead to Lincolnshire and is looking forward to Blacky joining her. 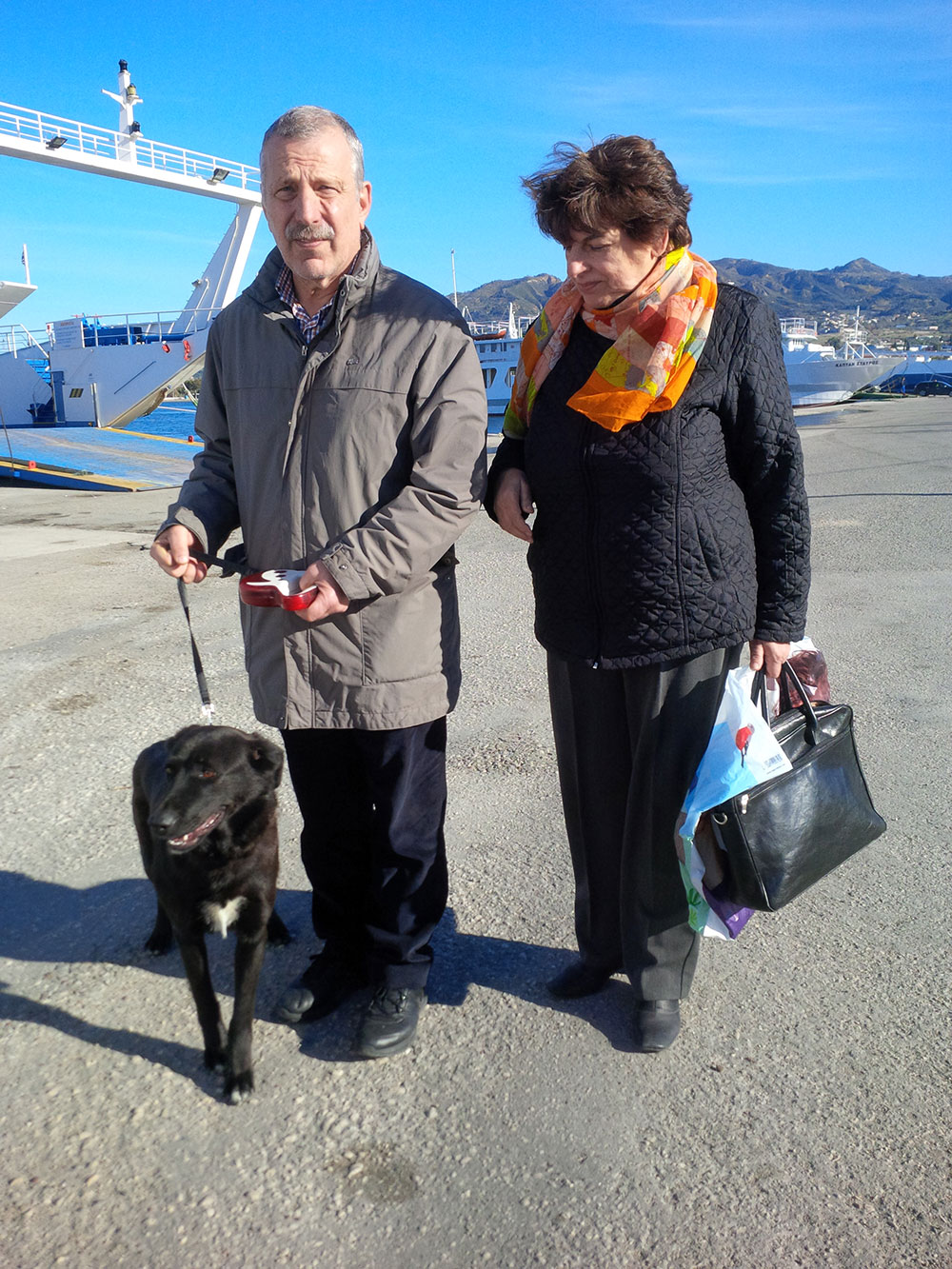 Blacky arrives with friends of Eleni 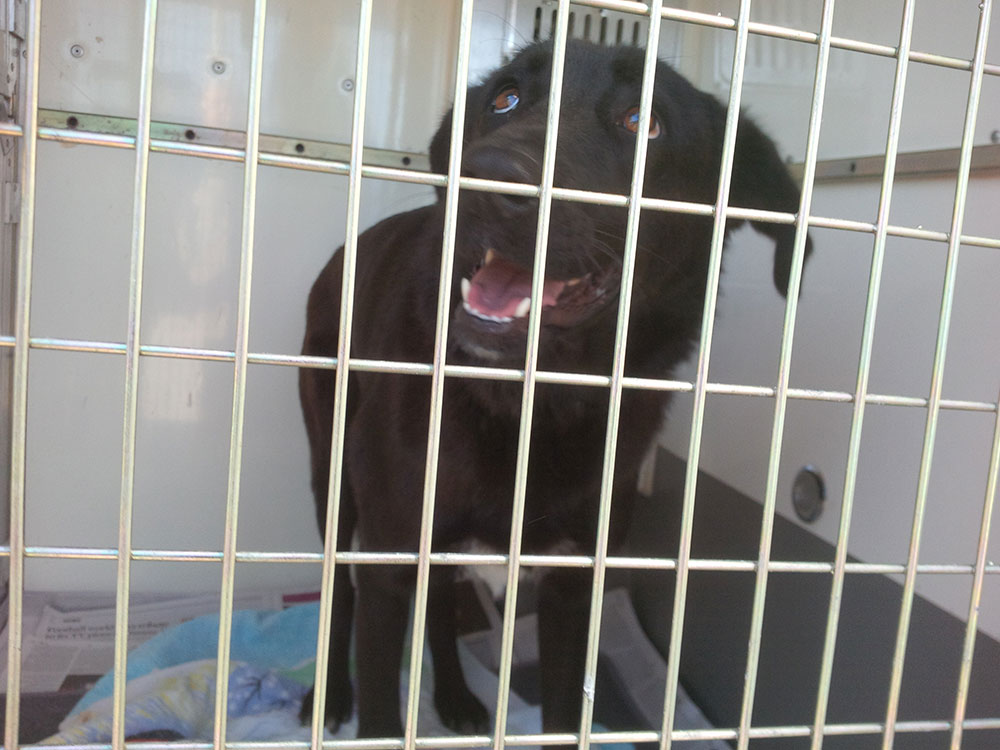 Sweet Blacky gets settled in for the trip 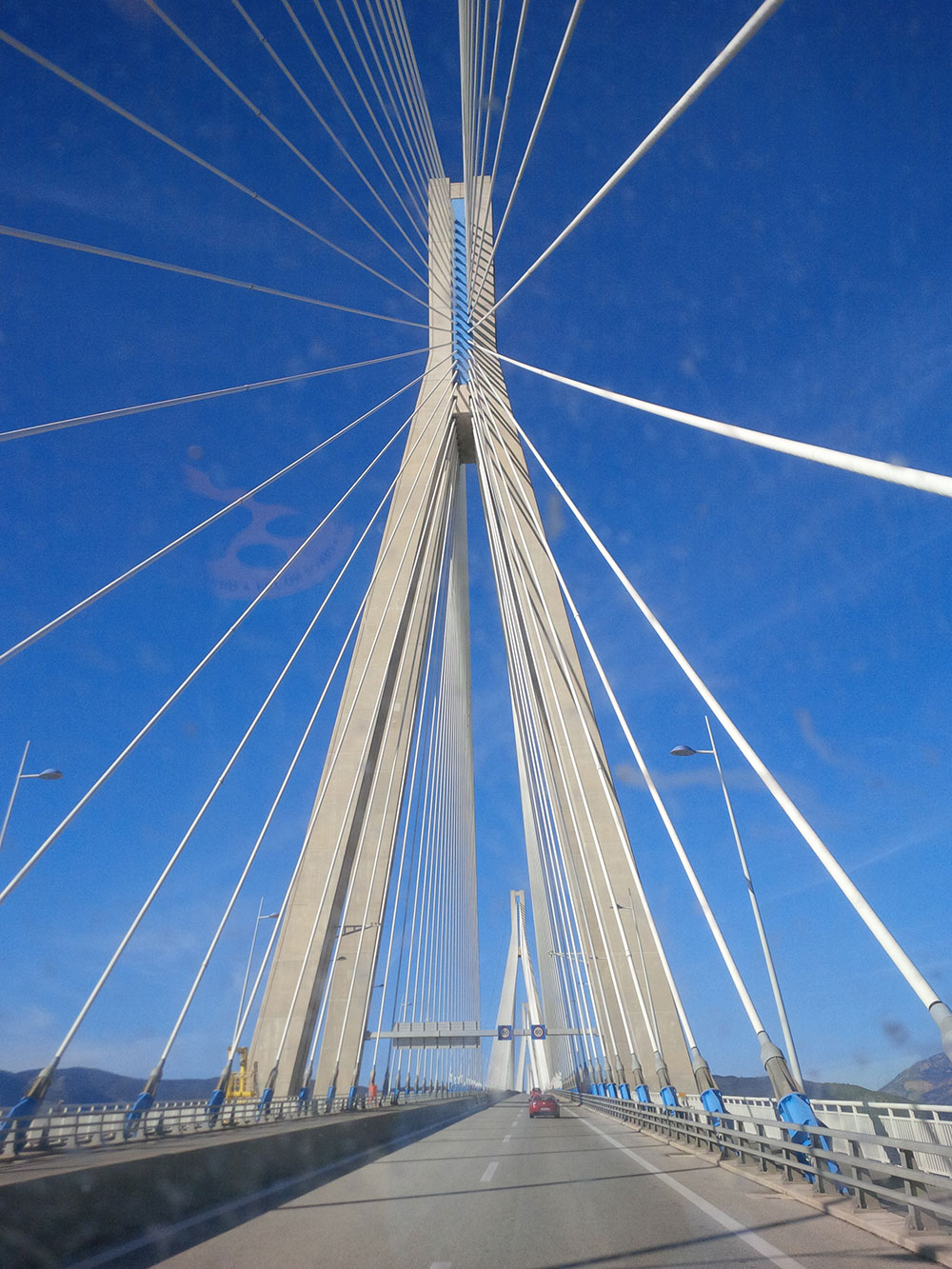 Rio-Antirrio is one of our favourite bridges. The world’s longest multi-span cable-stayed bridge, it crosses the Gulf of Corinth and links the town of Rio on the Peloponnese to Antirrio on the Greek mainland.

We’re now on our way to catch the ferry at Igoumenitsa which will take us to Italy, where we have more pets to collect. Our first stop, however, will be in Ancona to collect two new tyres, sourced for us by Mercedes 24. (We had a puncture on our way from Italy to Greece.) So that will add a slight delay to our journey, but we’ll do our best to make up the lost time. 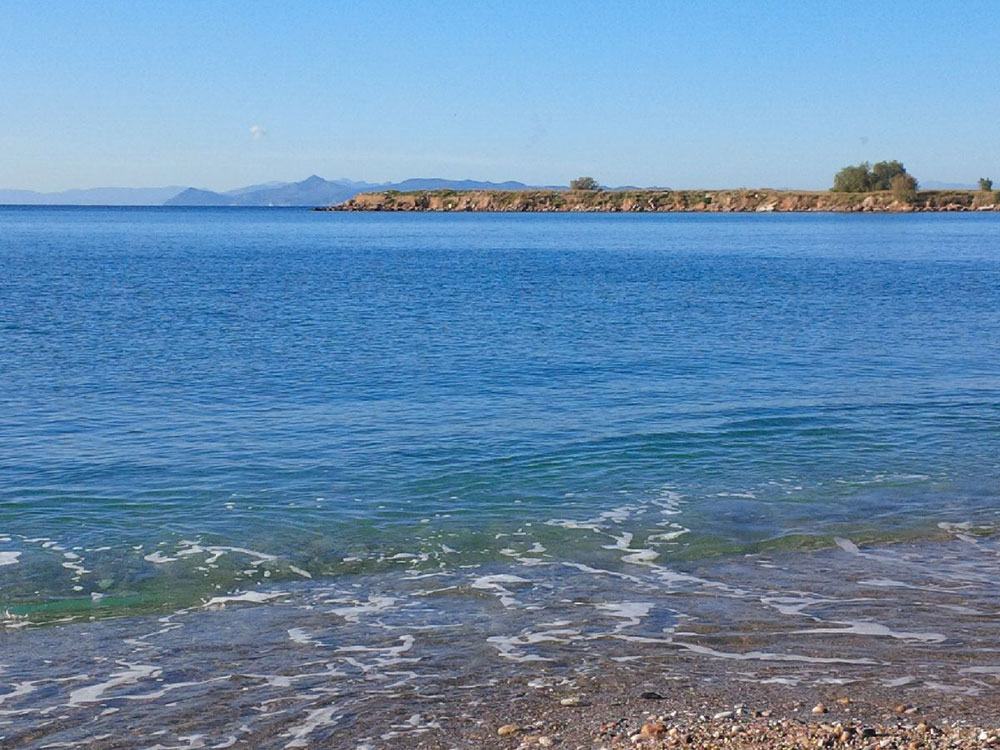 How’s that for a view from the office window!