Following the Camino de Santiago; and meeting up with UK-bound dog and cat passengers

Sometimes it can be a tough job — especially when you come across a gem of a hotel like O Muino de Pena! Animalcouriers followed the pilgrimage route — the Camino de Santiago (the Way of St James) — that ends in Santiago de Compostela in Galicia. A mill where pilgrims used to call in for a bed for their last night has been transformed into a wonderful rural hotel, where we were lucky enough to stay the night.

Resident Labrador Trotsky greeted us warmly on our arrival, very pleased to discover we had a box of Bonios with us. We soon became firm friends. His chum Elliott, clearly an ‘in charge’ sort of a dog, declined a Bonio but graciously allowed us to stay the night once he’d had a good sniff around the Animalcouriers van.

In Santiago de Compostela we caught up with Sabra and her handsome black cat Clark. This time last year we transported Clark and his brother Lewis to the area, as Sabra was studying here under the Erasmus program. Sadly Lewis has died in the meantime, but Clark is now heading back to the UK with us, as Sabra is returning to Cambridge University for the final year of her Spanish course. Sabra and her husband James have thoroughly enjoyed their time in Santiago de Compostela — as well as being a beautiful location, the entire Galician region has a rich history of poets, writers and artists.

Then it was off to the very pretty area of Santa Maria de Geraz do Lima in Portugal, to collect sweet little Mini Pinscher Lillian. She is off to join her owner Jessica in London, after living with Jessica’s mother-in-law, Fernanda, for a few years. Fernanda will be able to catch up with Lillian very soon as she’s due to make a visit to England.

Still in Portugal, we went to collect Rudi from Bob in Salir do Porto. When Simon and his family were on holiday in Nazaré, a clever young female dog decided that they would make fine new owners. So she attached herself to them and it wasn’t long before she was sharing their holiday home. Completely smitten, they decided to research how to get her to the UK. She has been staying with Bob, found through the local vet, until we could collect her and take her to the UK.

At Seixal we made the acquaintance of cats Ninja and Sushi, who were waiting for us at the front door when we arrived. Their owner Cheila has already moved to England and these friendly felines have been in the care of her dad Fernando.

From there it was off to meet Bela and her cats Onix and Happy. Bela and her family split their time between Portugal and the UK. But as they spend more time in the UK, they have decided the cats will be more at home there. 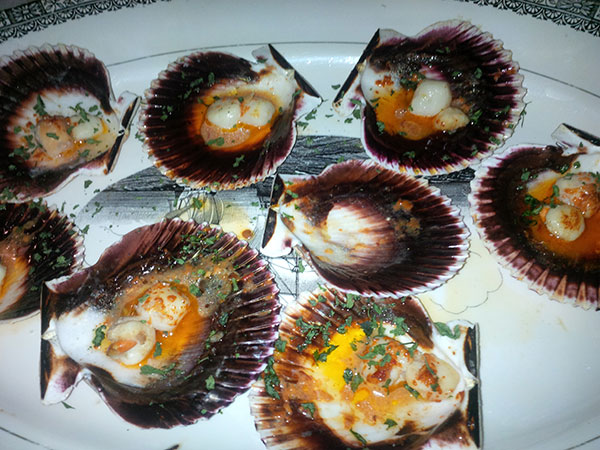 An appropriate dish to enjoy on the pilgrimage route — scallops 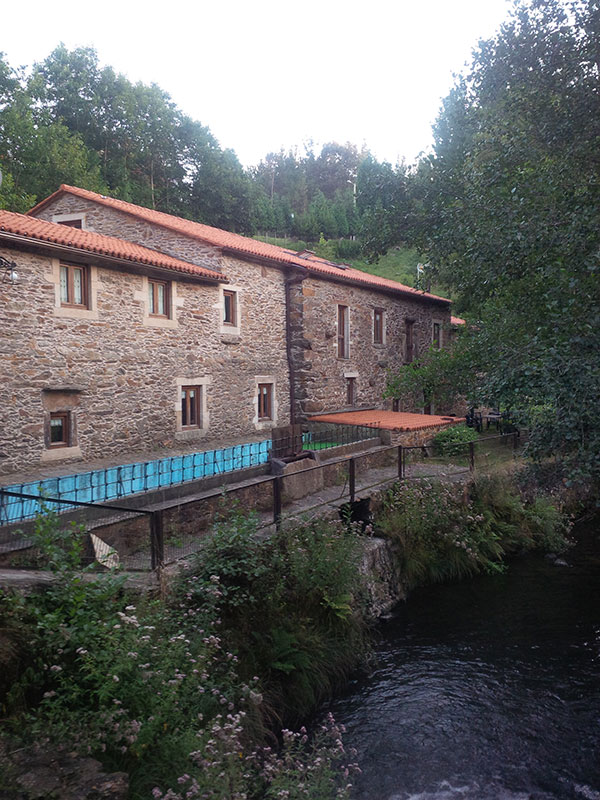 Our hotel in A Coruna, O Muino de Pena 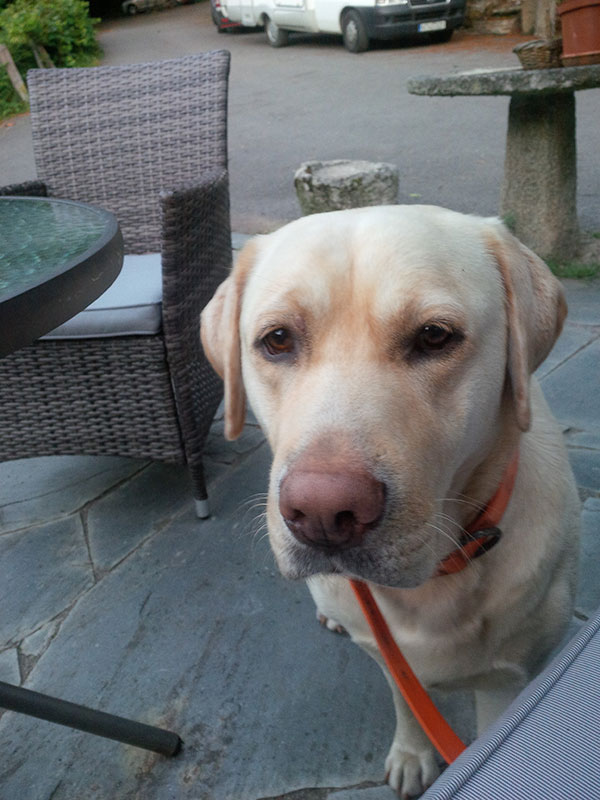 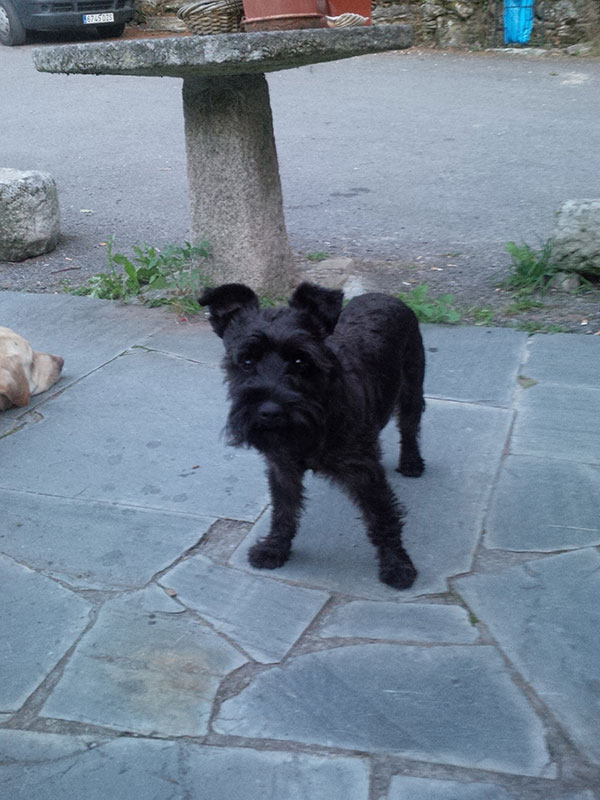 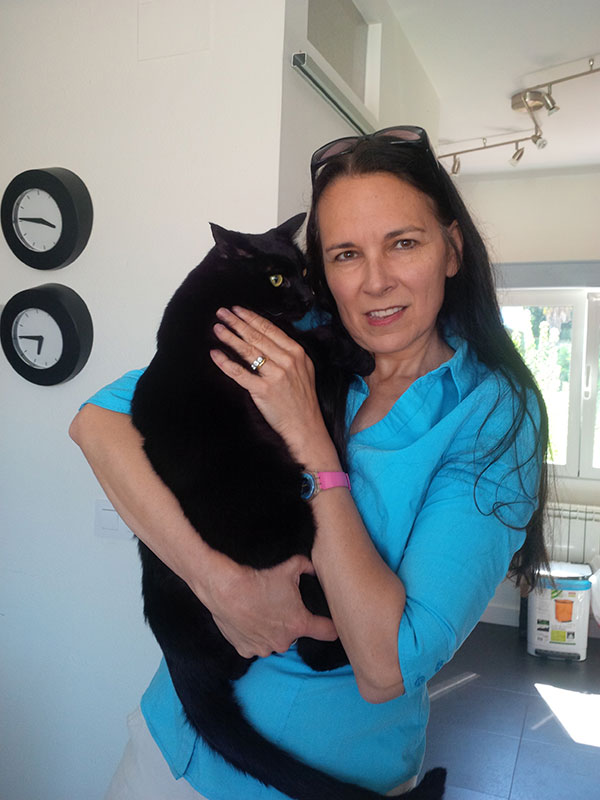 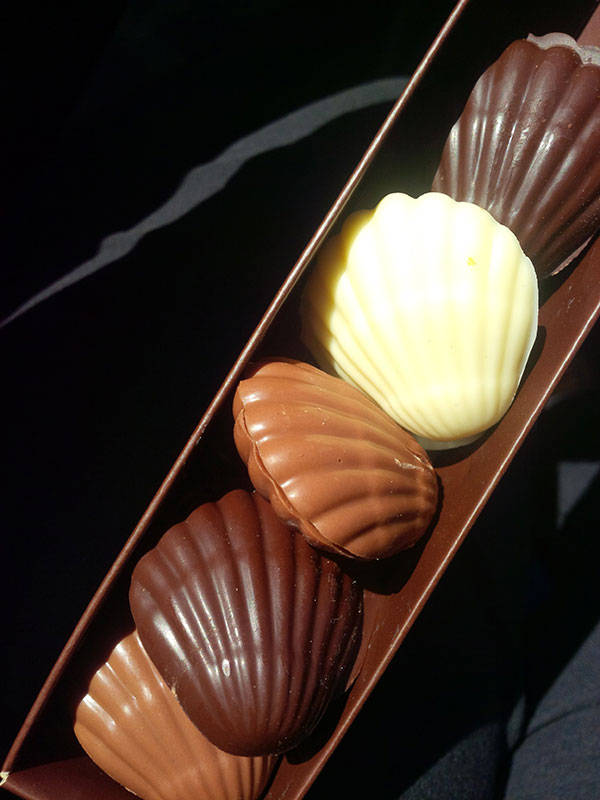 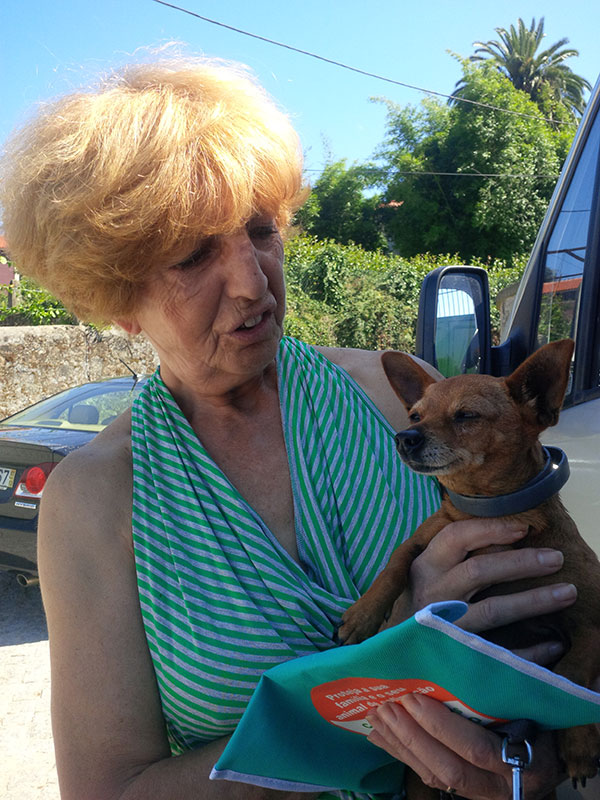 Lillian in the arms of Fernanda 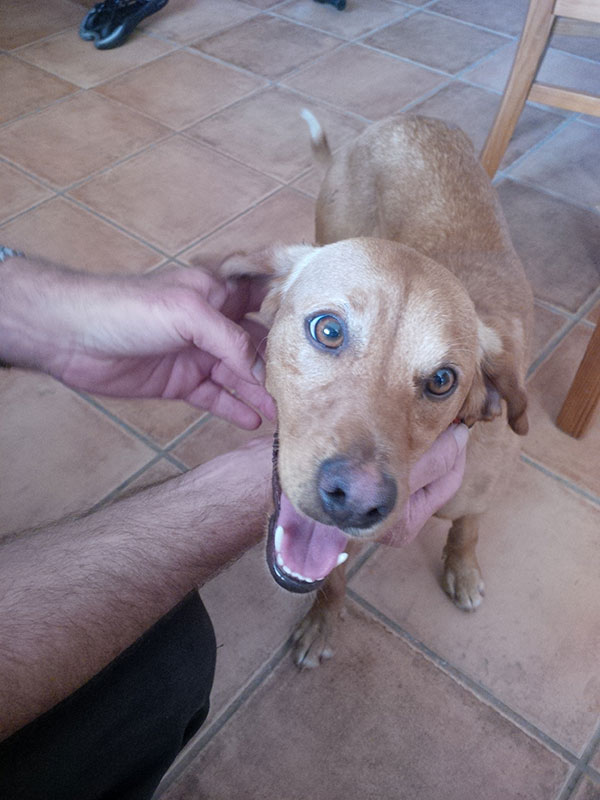 Rudi smiles for the camera 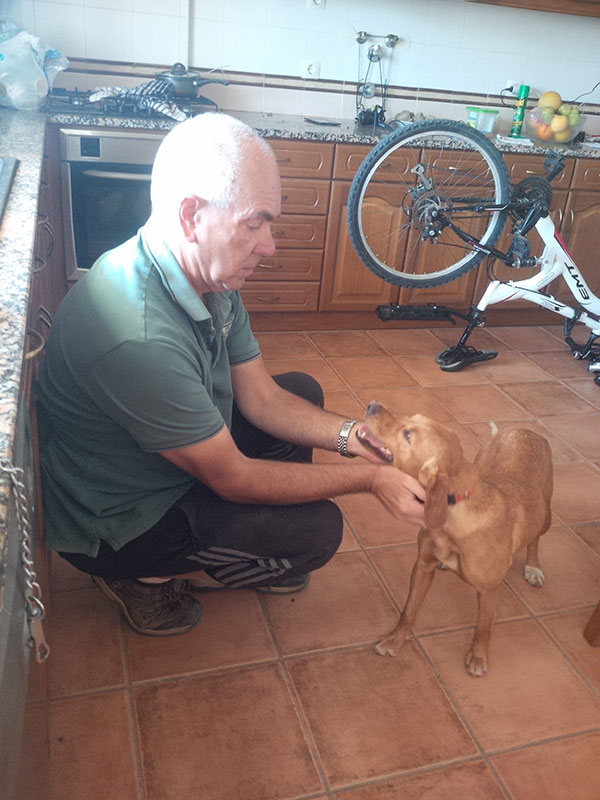 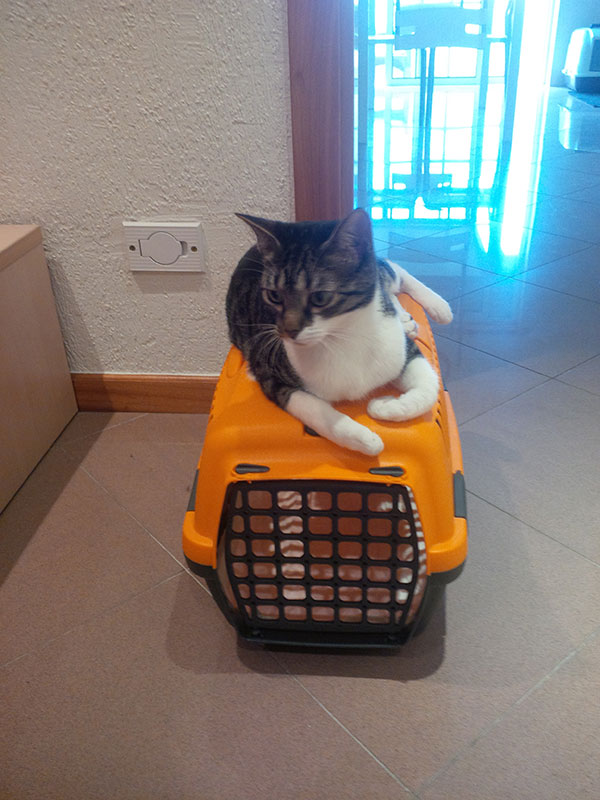 Very relaxed Ninja, waiting on top of her basket 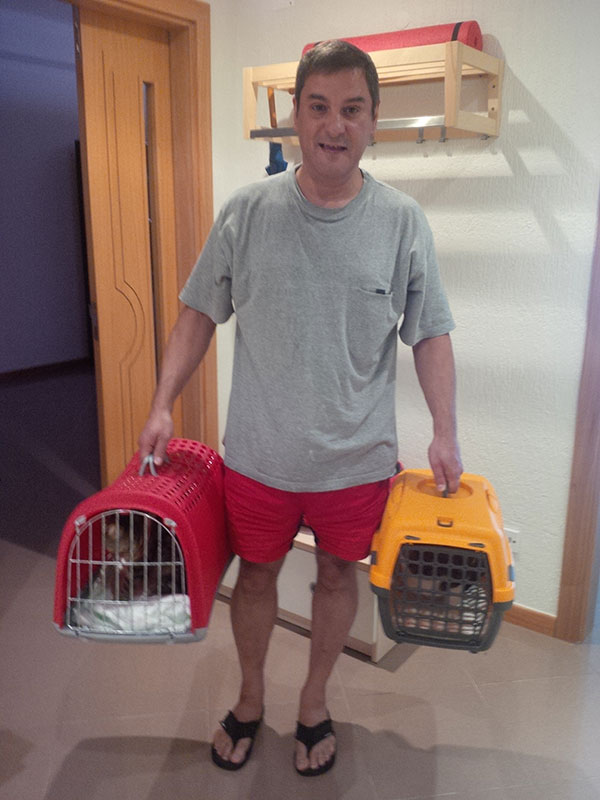 Fernando ready to bring out Ninja and Sushi 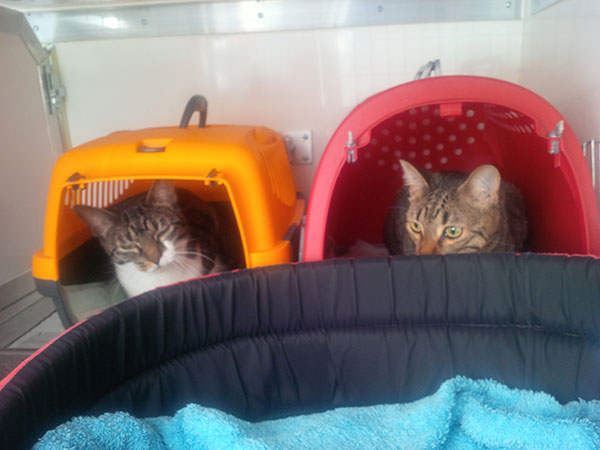 Ninja (L) and Sushi (R) get settled in 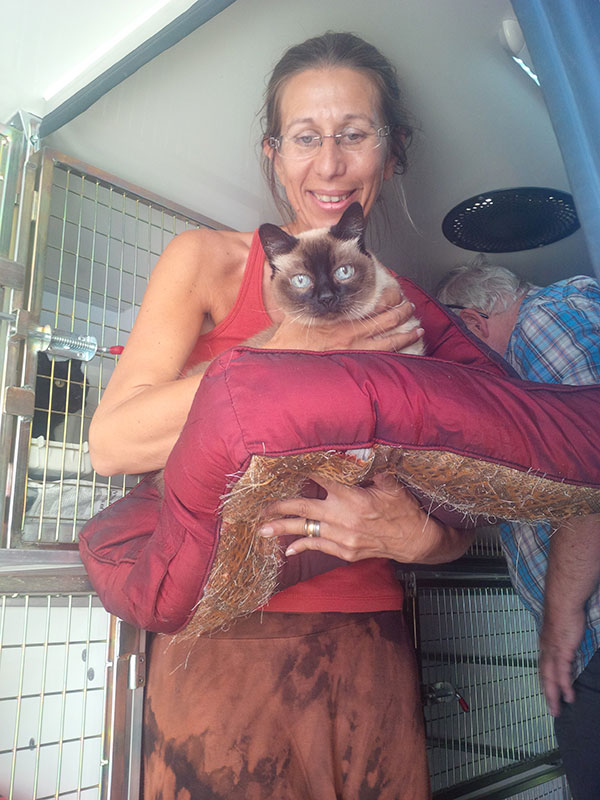 Bela with Happy in our van 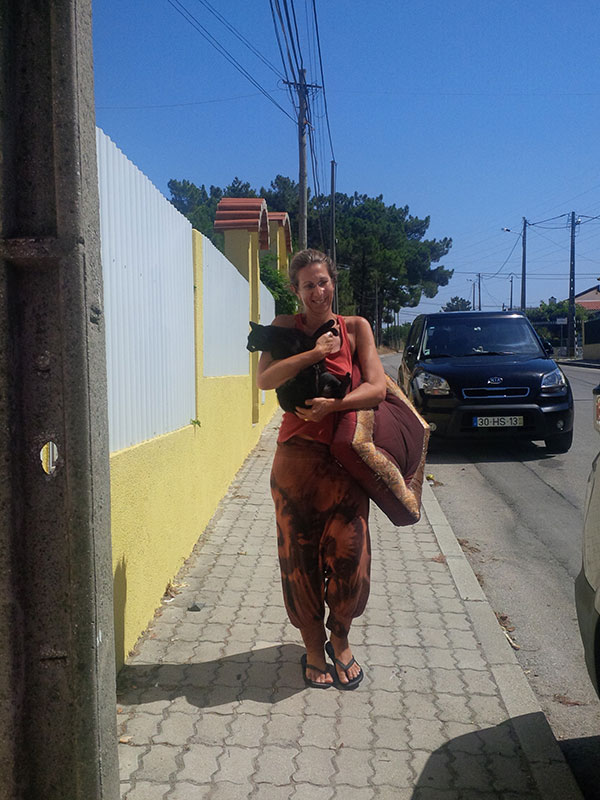