Ajax and Achilleus have made heroic recoveries

Ajax and Achilleus have made heroic recoveries

Black-and-white Ajax and white Achilleus are travelling with Animalcouriers from Greece to their new home in the UK. Both cats were very ill when Trisha and Andy found them. Andy has already adopted a number of cats from Greece who now have a lovely, safe life with him in the UK. Between them, Trisha and Andy have founded the charity Spartan Cats (see their facebook page) to help more Greek cats in need. They’re good friends with Nine Lives Greece whose great work we’re already very familiar with.

Here Andy tells us more about Ajax and Achilleus:

“In July, Trisha and I came across two very sick cats on the Greek island of Poros. The first was a very thin black-and-white cat who was wobbling about all over the place. He was in a very bad way and couldn’t breathe properly as he had cat flu. When I picked him up he was like a skeleton but was very friendly and seemed to want help. So we took him back to the room where I was staying (which later became a temporary cat hospital) and cleaned him up, fed him and cuddled him.

Later that night we went to find another sick cat that we had heard of and came across Achilleus, who was practically bald, sunburnt and didn’t seem to know where he was. We also took him back to stay at Trisha’s until we could take them to a vet.

Although the cats came from the street, they were very friendly and Ajax laid in bed, wrapped in my arms, purring all night. We called them Ajax and Achilleus as we thought that they needed strong names as they were so poorly. It took several weeks for them to get better and fortunately, in that time, they were offered a loving home in a cottage in the countryside in the UK.” 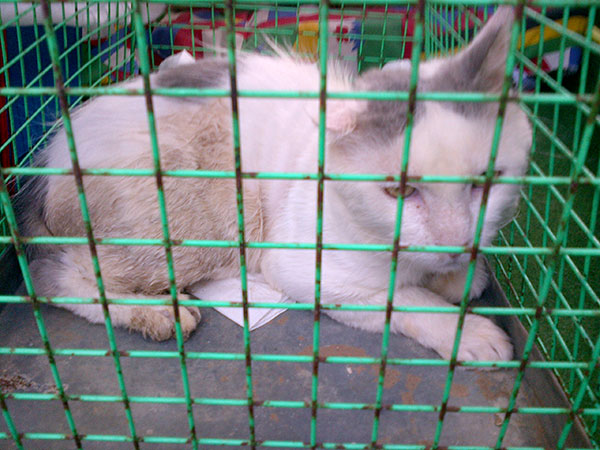