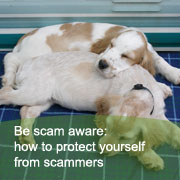 We received an email from Louise who unfortunately fell victim to a puppy scam via Facebook. Once she found our ‘beware of scams‘ page on the Animalcouriers website, she realised her experience bore all the hallmarks people need to look out for in many types of scam:

Louise asked us to help her warn others about the scam. Below is her story in full.

“I wish I had found your advice page sooner. I am absolutely heartbroken as I’ve lost £620 to a pet courier scam.

I’m a member of a selling site on Facebook on which a young lady was trying to find a forever home for her puppy. We as a family have been looking for a puppy for some time and the thought of helping someone in the process really appealed to us.

She said she was unable to have her puppies in her new apartment so needed to find somewhere fast. Next minute I was caught up in this whirlwind. She lived in Scotland and suggested a courier to deliver the puppy to me, which was great and I only had to pay for the courier which was £120. I was told to do it quickly so the puppy would be on its way to me. I was a bit taken aback by having to pay it via MoneyGram, but was reassured by the sender that this was their headquarters in Cameroon and they’d had recent problems with hacking on their website which affected their payment site.

I was then sent an email stating I needed to pay £500 fully refundable insurance before they would proceed with the delivery. I did put this off, asked for contact details, company address etc and they phoned me constantly as we’ll as sending email upon email, tugging at my heartstrings about the puppy. My instincts were not to pay and leave it. Stupidly and reluctantly I paid the money, and got an email saying the puppy was going to be on the next slot to my location. I got regular updates all via email. So I felt really good about it.

The next morning I received an email saying the puppy was at Newcastle Airport and doing well but due to weather and climatic differences between Newcastle and my location the puppy could not go any further in its current crate and would need a temperature-regulating crate which I would need to buy (£1450-£1580) or rent (£200 with £180 fully refundable). Within the email they said that the new crate would stop the puppy from experiencing internal bleeding, again trying to tug at my heart. By now I was fuming. So I called them on the 0702 number they gave me and had a heated discussion about it. They then sent me an email saying the sender had paid £120 but I need to pay £80.

I replied saying I wasn’t paying any more money and they went all quiet… So too did the very pushy sender, who had pushed me all the way via Facebook messenger. She gave me a sob story about her dad being ill and now passed away etc.

I do not want anyone else to go through this. I feel physically sick when I think of the money they’ve taken off me.”

To find out more about these scams, visit our website.